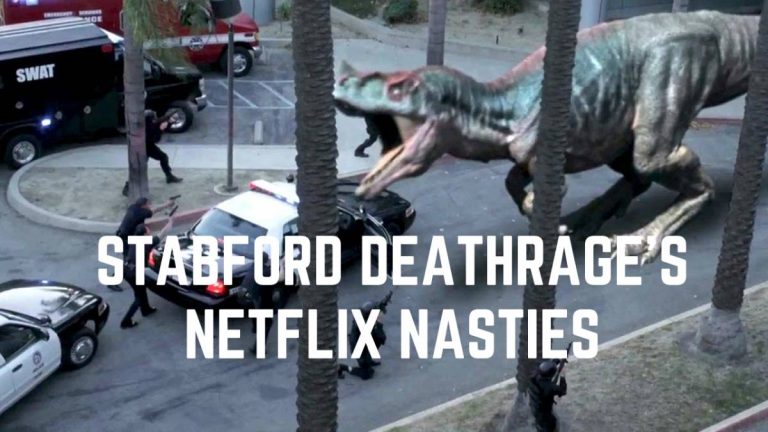 Using ‘flesh-regeneration’ technology, a scientist revives dinosaurs which then go on a rampage through Los Angeles but are sometimes flummoxed by modern windows and doors in this unintentionally hilarious Asylum film.

A plastic dinosaur puppet gets wheeled into a laboratory on a gurney. The scientists and security in the laboratory look at it warily, and then at each other in worry and disbelief, and who can blame them. After some dodgy science-type words, the dinosaur regains consciousness, and this causes a scientist to try and flee the room, only to bump his nose on the door because of plot. Naturally, the dinosaur chews his head off. In an effort to subdue the creature, scientists watching through ordinary operating-room windows flood the room with gas, but it’s probably just so viewers can’t see it’s just a puppet. As it succumbs to the gas, the dinosaur puppet collapses dramatically against one of these relatively ordinary windows, apparently because it didn’t have the strength to break through them and eat everyone. I’m certain this won’t cause any sort of paradox in the next paragraph. Then Treat Williams puts on boat shoes.

Treat and his daughter go to some sort of dinosaur presentation, and a scientist presents not-especially-convincing CGI dinosaurs, which are kept behind extremely strong and extremely science-y glass containment systems, and he says the vicious, meat-eating dinosaurs would be perfect for birthday parties. The camera pans over the crowd, and the auditorium looks surprisingly empty. When it pans back, suddenly the seats are all full. I’m assuming they just used a bunch of seat-fillers sort of like they do at the Oscars. The scientist announces to the crowd that the bloodthirsty, meat-eating dinosaurs would be perfect for a parade, and I suddenly start to get the feeling that the scientist doesn’t know a whole lot about dinosaurs.

Suddenly, a dinosaur breaks through one of the glass, window-like containment systems, although they were allegedly rated to 240,000 psi, and it starts chasing people through the partially-filled theater. The dinosaur’s tail strikes an electrical box, releasing the other dinosaurs, and that seems like a pretty severe defect to have in your glass dinosaur containment systems. The dinosaur chases Treat’s daughter, but it doesn’t seem to be able to break through a wooden door.

Treat grabs an axe, the cops arrive, and the camera crew is reflected in the side of a SWAT team van and several cop car windows. Treat’s daughter hides in some sort of illuminated display case in a darkened laboratory, and the whole scene has a Spielberg-y vibe I can’t quite put my finger on, as though I’ve seen it in some other “scientists bringing dinosaurs back from the Jurassic” sort of movie. Then the scientist who created the dinosaurs asks if dinosaurs can climb stairs. He’s not sure, so he asks a vet. Then the scientist has trouble counting to 16. Honestly, I don’t think he’s a very convincing scientist. Then the cast does some confusing things with phones.

In an effort to escape a dinosaur, Treat takes an elevator, and the elevator informs him that it’s reached its weight-limit for dinosaurs. Then the elevator explodes.

The dinosaurs continue feeding on people, and the SWAT team finally arrives, and Treat says, “It’s OK, we’re survivors”, as though it’s difficult to tell the difference between being alive and being a dinosaur hors d’oeuvre. Then cast members stare at something dramatic happening in the distance.

Treat and his daughter steal a car, and Treat makes his supposedly-teenaged daughter drive. One of the dinosaurs really seems to have a problem with Treat, so it chases him through Los Angeles. In an effort to escape it, Treat says, ‘Take that exit!’, then they drive down an alley. Somehow, they end up at the mall. I’m not sure why. Maybe it’s because someone wanted one of those mall pretzels. The dino with a vendetta attacks, and everyone runs to Macy’s. Treat unconvincingly dodges a pteranodon, and then the boom is reflected in a cop car window. Again. Then police set up a police barrier, you know, with those metal fence things, which are usually effective against flying dinosaurs.

Suddenly, a pteranodon unconvincingly pulls down a helicopter. Then a dinosaur puppet is thwarted by a chain-link fence. It breaks down a fire door because why not, then it’s confused by a vintage clothing boutique’s changing room door. The dinosaur puppet majestically dives under a rack of vintage clothing, and by ‘majestically’ I really mean ‘LOL-inducingly’. While Treat and his daughter are in a basement, his daughter beats a dinosaur to death with a hockey stick, even though bullets can’t pierce its thick hide. Then it’s back to the vintage clothing store. If you think it’s tough keeping up with all these locations in this review, try watching the movie. Then again, maybe you shouldn’t.

Dinosaurs appear on the top of buildings (apparently, they CAN climb stairs), and dinosaurs ride on helicopters. Treat’s daughter dramatically shouts, ‘We don’t leave anyone behind!’, and then they leave someone behind. Treat takes a LOL-worthy jump into a helicopter, and he takes a LOL-worthy ride to the Hollywood sign. Then with very little explanation, the film ends.

Age Of Dinosaurs has a nonsensical script, terrible dialogue, and a whole bunch of not-so-special special effects. It’s a complete failure as an action film, but it’s a triumph as a comedy, and it’s recommended if you like stuff that sucks.