Space Jam: Legacy is the definition of 'throw everything at the wall and see what sticks'. 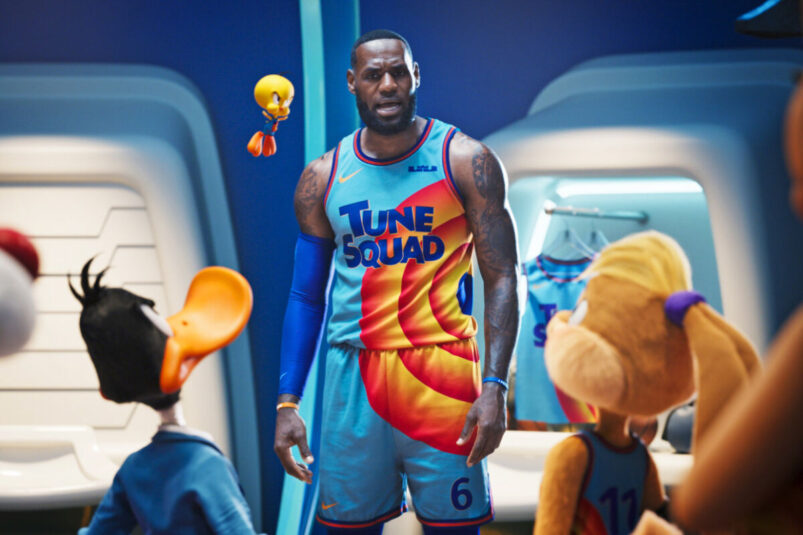 Joe Pytka’s 1996 Space Jam was a foundational film in my youth; we witnessed a live human being transported inside the highly imaginative (and wholly fabricated) world of the Looney Tunes. Having rewatched it last week for the first time since I was six years old, I couldn’t believe how this was one of my favorite films growing up: it’s an aesthetic and screenwriting mess, serving as nothing but a pure commercial for the NBA, The Looney Tunes and Michael Jordan, with a paper-thin story and dreadful animation to boot.

As my childhood bubble immediately popped, it was clear to me that the latest film in the saga, Space Jam: A New Legacy, wouldn’t be a nostalgia-filled trip, but instead would likely be a pure commercial yet again, serving as a backdoor pilot for more intellectual property-driven films to be produced.

Joe Dante’s Looney Tunes: Back in Action used IP as a form of nostalgia, which is part of Dante’s signature blend of mixing classic pop culture references with meta comedy. Steven Spielberg’s Ready Player One, meanwhile, is filled with IP references, as it’s part of its main story and quest to find Easter eggs.

In Space Jam: A New Legacy, though, the film’s entire story is based on nothing but shameless product placement through previously established IP, when it could’ve been more contained and solely focused on LeBron James’ quest to get his son back. That’s the basis of the film: LeBron is so wrapped up in getting his head in the game and practicing for the next championship that his relationship with his son, Dom (Cedric Joe), who doesn’t want to play basketball but design video games, is terribly distant.

He’s training his son to become the next LeBron, while Dom doesn’t want anything to do with playing live basketball, and believes his father isn’t listening to him and allowing him to do what he wants with his life. After LeBron rejects a pitch from the Warner Bros. algorithm Al-G Rhythm (Don Cheadle), the computer kidnaps his son and challenges King James to a basketball game inside the Warner Bros. “Serververse.” This all serves as a pretext to quickly team up LeBron with Bugs Bunny (Jeff Bergman) and the rest of the Looney Tunes gang, as they’ll use nothing but IP to defeat Warner Bros’ key algorithm.

The problem isn’t the IP, per se, but it’s how director Malcolm D. Lee and the film’s six writers use the material. The predominant audience for this film are children and, dare I say, children who are well-versed in pop culture trends and memes, such as Big Chungus and the dab – both references occur early on in the film and are as dated as when they were trendy.

Young children don’t have an emotional connection to films like A Clockwork Orange, The Matrix, Casablanca, Mad Max: Fury Road, It, Austin Powers and Ken Russell’s highly controversial biblical horror film The Devils, and yet this is the kind of IP Space Jam: A New Legacy promotes. Films that young audiences have no connection to, that a more mature demographic will either mildly enjoy or find terribly annoying.

The one funny joke involving Wile E. Coyote preparing a sacrifice inside Mad Max: Fury Road is overshadowed by expired Casablanca and The Matrix jokes that feel oh-so-2000s. Bullet-time was mocked in virtually every comedy film after The Matrix was released. It’s been done to shreds, and there’s not an instance in which a visual reference to that movie becomes funny. The same can be said for every Warner Bros. character that magically shows up during the film’s hour-long climax, as they’re only there for you to say “Look! It’s Pennywise the Clown!” or, a more apt reaction, “Look! It’s the droogs from…A Clockwork Orange?!”

Looney Tunes’ Pepe Le Pew was cut from the film due to the character’s apparent promotion of “rape culture”, but, hey, the droogs, who literally rape people in the movie are in it? Or the nuns from The Devils, an X-rated film which contains explicit amounts of violent and sexual content and was banned in several countries at the time of its release also made the cut?

It would’ve made much more sense for Space Jam: A New Legacy to be not only a celebration of the Looney Tunes’ indelible legacy on animation, but also bringing other iconic animated characters Warner Bros., Turner, MGM and Hanna-Barbera created, such as The Jetsons, Scooby Doo and The Flintstones (which have minute cameos) instead of virtually every single movie Warner Bros. can think of, that’ll elicit absolutely no reaction from young children who are, well, too young to watch R-rated films. Their only connection to this entire film are the Looney Tunes themselves and the three pop culture references they’ll likely understand.

While Space Jam: A New Legacy fails to make a lasting impression in the crossover department, it at least makes up for it in the visual department, beautifully mixing classic 2D animation with refined 3D during its climax. There’s real care by cinematographer Salvatore Totino to make its central basketball game as visually dazzling as possible, which he succeeds wholeheartedly by using 3D animation as the main character of the film’s eye-widening moments. When LeBron (or Dom) jumps high in the air to score, the gravity-defying physics of a superhero film combine the gravity-defying sport of basketball in the most beautiful fashion. It’s only during the game’s pit stop, a dreadful “Notorious P.I.G.” performance, where the CGI isn’t as great as it was before.

Don Cheadle seems to be the only live-action actor who gives a damn here. His character is, by far, the most interesting mainly due to the sole fact that Cheadle can carry the script’s predictable material like a true on-screen legend. There aren’t that many actors that can make a computer sound menacing, yet Cheadle exudes his signature sense of coolness and charm, with an overall sinister aura that makes him a rather amusing villain to watch.

LeBron, on the other hand, doesn’t have the same charm as Cheadle nor does he seem to want to make the fictionalized version of himself as interesting as Al-G. He’s as flat and unengaging as Michael Jordan back in the 1995 film, with the side characters (the Looney Tunes) being the interesting ones. It’s incredible how Jeff Bennett and Eric Bauza sound exactly like the work of Mel Blanc and Joe Alaskey, the two best voice actors who performed the Looney Tunes over the years and while the material is drastically uninspired, it’s still fun to listen to these voices again.

Space Jam: A New Legacy is marginally better than the first one, due to a story that has more emotional weight and bigger, more urgent, stakes. In the first film, Jordan isn’t involved with whatever’s going on in Tune World, whereas LeBron needs to play basketball to save his son from the hands of an evil algorithm. The stakes are clear, and the basketball game feels more epic (and looney) than the first one, which used its paper-thin story as an excuse to promote as many strokes of unfunny visual comedy as it could.

However, even if its intentions are quite noble in the story department, the film fails to make a lasting impression or become a new cult classic with the innumerable (and unnecessary) product placement it keeps making every two seconds. If it would’ve focused on the Looney Tunes, instead of wanting to be a spiritual sequel to Ready Player One, it probably would’ve been a better film. Time to go back to the basics and watch Looney Tunes: Back in Action instead. Now that’s family entertainment. 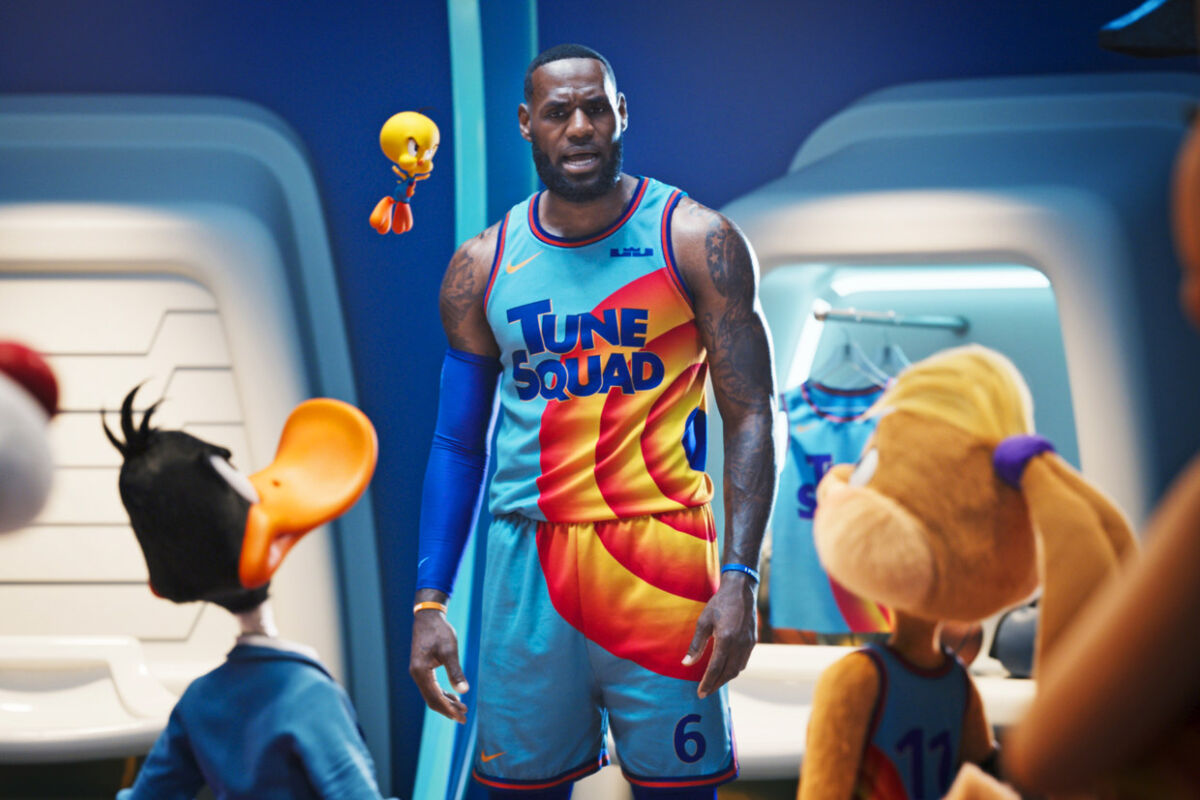 Verdict
A New Legacy contains a better, and more urgent, story than the first one, but the film’s focus on established Warner Bros. IP makes it feel more like a commercial for better movies than anything else.
4
Cultured Vultures is a pop culture website established in 2013 covering all things gaming, movies, and more. We eat your words.
All The News On The Biggest Games