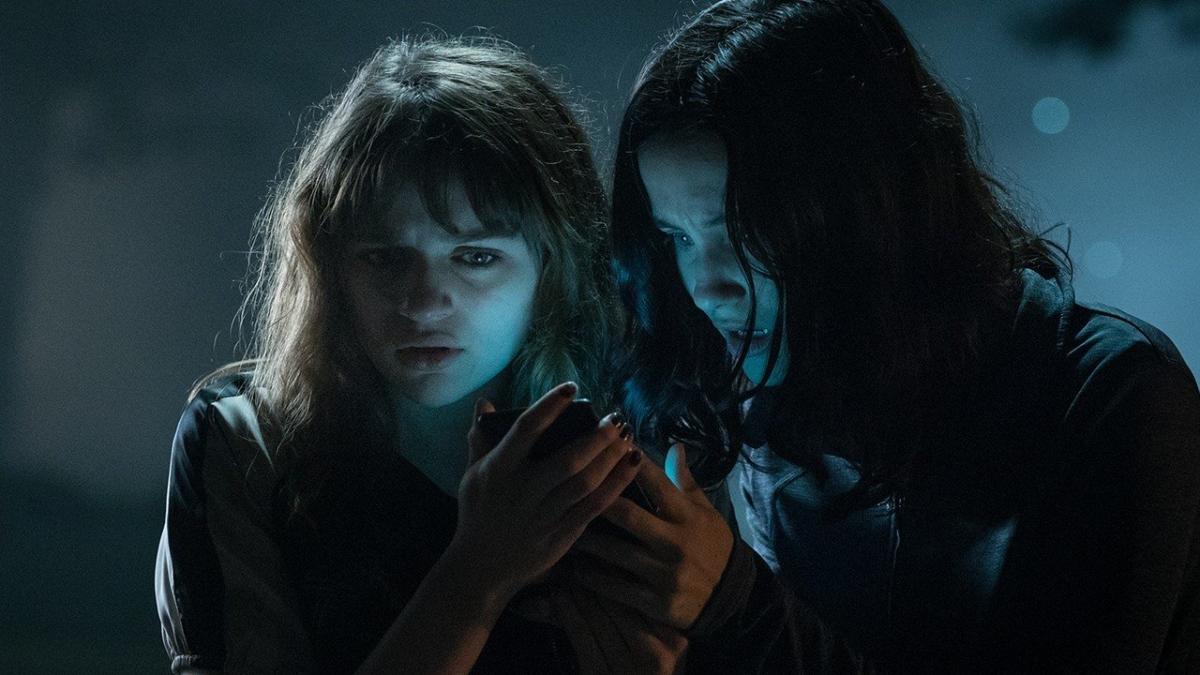 Open laptops, cellphones, dark forests, and nightmare scenes which happen while everyone is awake. That about sums up the Slender Man movie. You’d think that a creepypasta icon such as the Slender Man would make for a perfect antagonist in a horror movie. Unfortunately, the 2018 production of Slender Man crumbled across the board, and it’s a shame because there was potential here.

For a little backstory, the Slender Man creepypasta originated on the Something Awful forums in 2009. It entails an octopus-man-thing in a business suit which stalks and either abducts his victims or drives them to insanity. Basically, it’s the boogeyman of the Internet and an interesting one at that – interesting enough to produce a crappy movie revolving around the same creature.

Screen Gems’ Slender Man follows four teenage girls who summon the dreaded Slender Man upon watching a cursed Internet video. After said video ends with a seizure-inducing strobe effect (replete with enough Illuminati symbols to give your QAnon junkies a run for the toilet tissue), spooky and nightmarish things begin to happen – fast moving clouds, full moons, and tolling bells. When one of the girls disappears under mysterious circumstances, the remaining three are consumed by a supernatural nightmare of which none are likely to escape. Oh, and your friendly neighborhood Slender Man appears. Don’t forget him.

I wouldn’t consider Slender Man a mess, but it’s most definitely a dud. We have a relatively young cast, a dark atmosphere, and a supernatural bad guy. There’s nothing wrong with these ingredients for a horror film, but when you bring nothing new to the table, it just becomes another generic “horror” movie.

One particular issue with this film is the script. While we have a decent antagonist and conflict, everything else from characterization to story arc falls flat. Midway through the film, as the Slender Man grows stronger and more entrenched in the lives of these girls, Hallie (played by Julia Goldani Telles) decides to just quit “this game” and pretend like nothing is happening. This might work in, say, a shark movie. Just don’t go in the water. Fine and dandy. However, as her friends continue to disappear while she personally witnesses the evil entity causing trouble all around her, she comes off as idiotic to just pretend it’s not happening. There’s an easy diagnosis to this character’s problem: bad writing.

The whole movie is full of moments like these. We have a few characters who make an appearance and help move the story along, but then they drop off the face of the Earth and it’s over. Case and point, we have Tom (played by Alex Fitzalan), who acts as a love interest to Hallie. After he has an off-screen experience with the Slender Man, we see a change in his attitude and his growing paranoia, but then he’s gone. Nothing gets him, nothing eats him, nothing possesses him. He disappears from the script altogether. He isn’t the first one, or the last, to do so in this film.

On top of a weak script, there’s a huge emphasis on technology. Cellphones and laptops appear every five minutes, and the beast itself is summoned by the reading of words on a YouTube video. That’s right. A YouTube video. This is one of those films that makes me realize how sick and tired I am of horror movies depicting haunted websites, laptops, chat rooms, cell phones, iPads, and the likes. It’s yet another unoriginal ingredient this film weaves into the plot and it doesn’t work.

If anything, the acting is not terrible. The film stars Joey King, a young but experienced veteran to horror films such as The Conjuring and Wish Upon. She leads the pack among her friends and her performance carries much of the water in this film. The remaining ensemble is good, but we tend to remember their faces and not their names – another case of bad writing.

There’s an obvious Evil Dead influence here with a demonic entity summoned by the reading of an encoded message. If you ask me, what might have worked better is if the writers drew from Wes Craven’s New Nightmare, weaving in the real-life Slender Man story as it was in 2009 with fictional characters who undergo similar circumstances. Unfortunately, what’s done is done. Slender Man isn’t the worst horror film in history, but the creepypasta will outlast the memory of this film – and rightfully so.

Verdict
Screen Gems Slender Man takes the creepypasta and flushes it down the toilet. While the acting is okay, the weak story kills it.
3
Cultured Vultures is a pop culture website established in 2013 covering all things gaming, movies, and more. We eat your words.
All The News On The Biggest Games