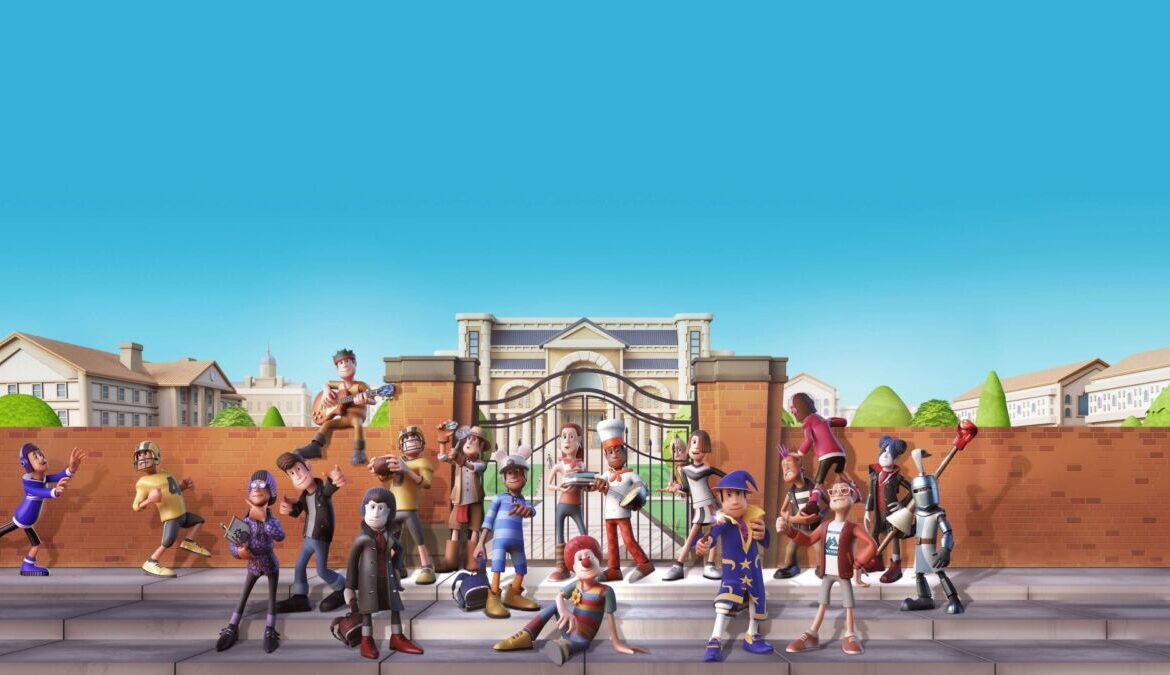 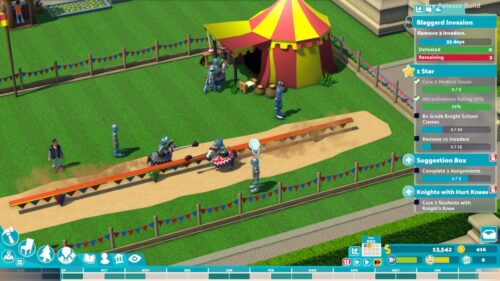 Two Point Studios has quickly risen to the top as a leading management game developer. Their excellent debut effort, Two Point Hospital, brought back nostalgia for the awesome and hilarious Theme Hospital, while also updating its own visual flair for modern technology, design sensibilities, and expectations. With Two Point Campus, the developers take the lessons they’ve learned from their previous work and deliver a great and innovative game that pushes the series and this subset of games forward.

Players take the role of president or headmaster of their own university with the goal of creating a successful institution across a series of scenarios. There are 12 missions in total, each with a distinct setting where the first two act as tutorials to get you up to speed, though each scenario can easily take you several hours to fully complete, so there’s plenty of gameplay on offer at launch. Just like most management games, Two Point Campus is a single-player-only game, though there are online leaderboards that let you compete with the community to see who can make the best campus.

Two Point Studios once again hit it out of the park in the presentation department. The art direction is bright, vibrant, and easily readable, which is especially useful when it comes to large campuses in the later stages of a mission. Character animations are all fun and dynamic, so it’s just a plain joy to leave the camera on a classroom or corridor and see how students and staff interact with each other.

The soundscape is solid with excellent music, though the tracks do repeat one too many times across long gameplay sessions. The absolute standout, though, is the hilarious writing, which is especially apparent in the Two Point Radio that plays in the background, leaving the game’s world feeling like a real place that I’d certainly love to visit. Also, this time around, some of the commentary is quite a bit more biting than its predecessor, which gives Two Point Campus’ writing that extra bit of parodic self-awareness and narrative heft.

From a gameplay perspective, Two Point Campus is a great success across the board that’s able to maintain the spirit of its predecessor, while also taking several key innovative steps for a fresh experience. Starting with the basics, the game’s core management mechanics and dynamics are expanded compared to their predecessor and as engrossing as ever.

There’s a wide range of simple and silly courses to run and a menagerie of rooms and items to place across your campus. This time you can also place your own buildings, adding extra flexibility to your placement options, so you can utilize more of the outdoors and negative space within buildings. Most importantly, you can easily spend hours simply observing the hustle and bustle of your system, while tracking and optimizing room placement to increase happiness and increase revenue.

The first source of innovation in Two Point Campus is its setting. Just like Rebellion’s Evil Genius 2 occupied a unique place in the market due to a drought of spy and superhero strategy games, so does Two Point Campus in that it’s the first major management game to explore university life in quite a while.

Two Point Studios brings it home with how well they model a parody version of student life. This involves student friendships and romances all the while rushing to class and ignoring your lunch just to make sure you pass the course. Helping students engage in self-discovery by providing clubs, games, and opportunities for self-expression all make the game feel the most human-centric management game, where characters are treated less like a cold collection of stats, which is often the case with many management games, and more like actual human beings.

Two Point Campus continues to innovate in how it treats the management gameplay loop, shifting from a linear structure to more of a circle or spiral framework. Most management strategy games take on a linear form coming across as conveyor belt simulators, where speed, the volume of client intake, and efficient traffic planning are all key components with character needs playing second fiddle.

Two Point Hospital is a great example of this kind of structure where the game essentially boiled down to minimizing distractions for patients to get them diagnosed and treated as quickly as possible for you to take their money and then free up space for the next patient. This made corridors feel empty and coldly functional while the vast array of items was nearly pointless unless they improved staff performance.

Though Two Point Campus doesn’t necessarily reinvent the wheel, it challenges some of these traditional management game tropes in a thematic way and shows that it’s possible to experiment and bend established conventions if it makes sense for the game. For example, the goal in the game isn’t to get rid of students as quickly as possible, but instead to retain them and ensure they have the best possible educational experience.

Basically, the sole need for speed and efficiency isn’t as prevalent in Two Point Campus’ management loop, which gives more weight to taking care of student needs and sprucing up college grounds. This means that the horde of items at your disposal, the corridors between rooms, and the outdoor spaces have more impact on gameplay as you can utilize them more effectively to make the life of your students all the more enjoyable.

Two Point Campus isn’t perfect though and there are a few gripes, annoyances, and missed opportunities that keep it from being truly legendary. Just like competitive strategy games chronically struggle with challenging AI, the bugbear for management games is the UI and Two Point Campus, unfortunately, suffers from fiddly and not entirely efficient UI design.

On the whole, the UI’s about the same in quality as Two Point Hospital, but with some puzzling omissions. For example, you can no longer assign and prioritize jobs and tasks for your staff in a centralized menu, so you have to individually go through every staff member and customize their behavior. This can be an absolute nightmare on large scale campuses or if you plan to massively rework your management approach.

The developers also brought additional crises into their scenarios, as well as invaders and troublemakers from neighboring campuses to add pressure on your management system, which is a neat idea on paper. However, in practice, these invaders and nasty events are more of a nuisance, having only minimal impact on gameplay and only raising questions about the lack of more involved competitive mechanics, especially in the missions involving knights, magic, and sports.

Finally, the strategic meta-game is quite lackluster in that there’s nothing that you can really do in-between missions to affect your gameplay in a more meaningful manner. In other words, there’s a gap in strategic options that is just asking to be filled.

Regarding performance, Two Point Campus ran perfectly fine with minimal or no frame drops. However, it’s a taxing game, so if you’re unable to meet at least recommended specifications then you can expect some slow down, especially in the larger scenarios and when your campus really gets busy.

The options menu is perfectly fine, though could’ve benefited from more accessibility settings, especially in the color department. I didn’t encounter any game-breaking bugs or crashes, though there was some jank in character behavior where sometimes students and staff would get caught and stuck on corners or on items in cramped spaces, though most of the time these issues would resolve themselves. An option to pick up students would’ve been neat to help more actively solve these annoying situations.

Two Point Campus is an excellent example of a developer learning, improving, and innovating upon a formula to create something that’s immediately familiar, but also throws in a fresh spin. The writing, setting, and general sense of charm that pervades the entire game easily make it captivating and distinct from all other management games on the market.

There are some minor kinks and rough edges that keep it from a perfect score, but they don’t do enough to seriously hamper the gameplay experience and undermine its overall high level of quality. We can wholeheartedly recommend Two Point Campus to all management and strategy games fans. 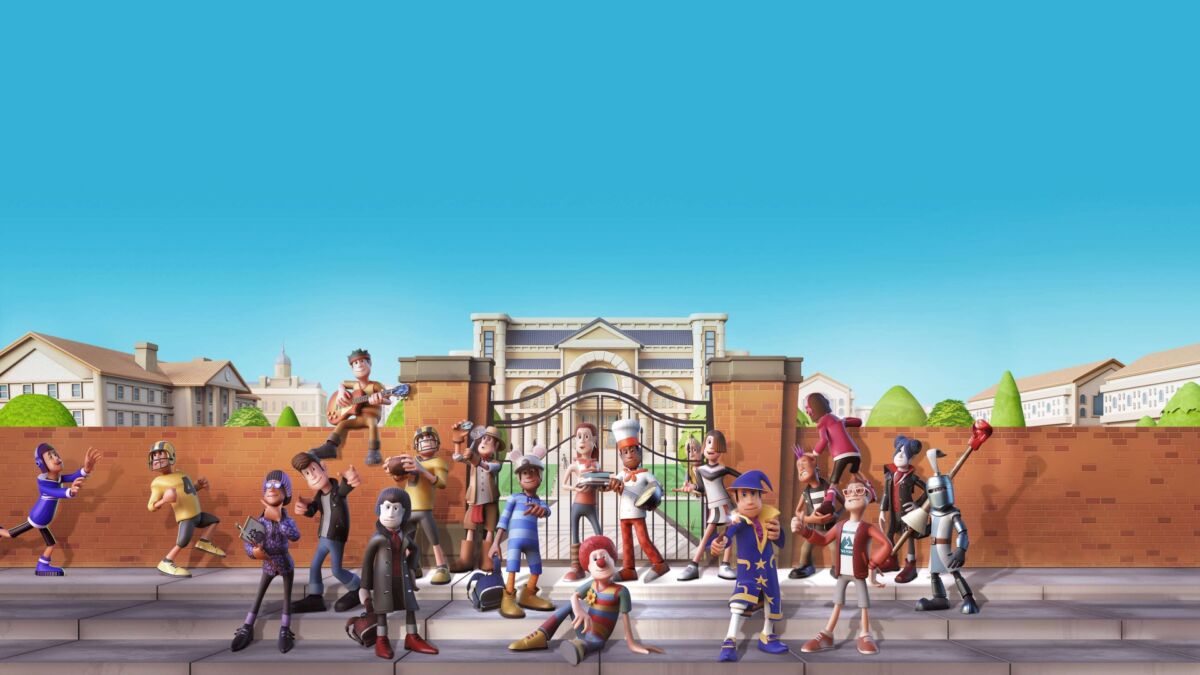 Verdict
The developers clearly did their homework with Two Point Campus and it will easily infect you with its charm, keeping you hooked on university life.
8.5
Cultured Vultures is a pop culture website established in 2013 covering all things gaming, movies, and more. We eat your words.
All The News On The Biggest Games