The backers are not happy. 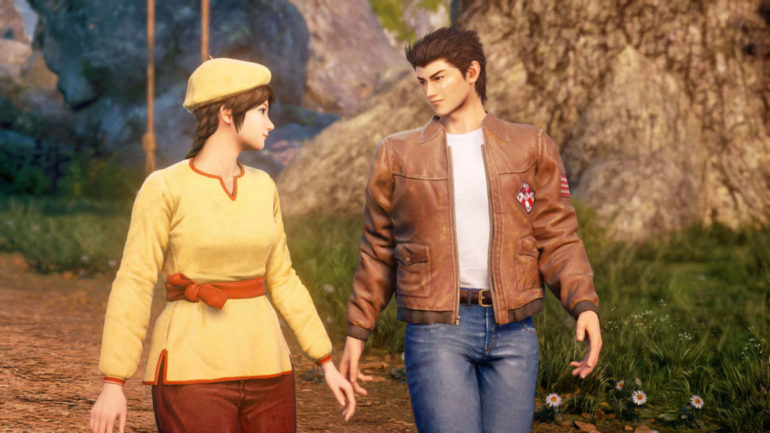 Fans who backed Shenmue 3 on Kickstarter are demanding refunds in their droves with the news that the game would now be coming exclusively to the Epic Games Store on PC — a massively polarising competitor to Steam.

The announcement was made during the PC Gaming Show (itself sponsored by Epic Games, so we probably should have seen this coming) at E3 2019. An update post was made to the official Kickstarter campaign page to let backers know that PC distribution plans had changed.

“We are happy to announce that Shenmue III for PC will be will be an Epic Games Store exclusive. Development for Shenmue III has been moving forward using Unreal Engine and the support we have received from Epic has been excellent. But most importantly, in looking for the most enjoyable experience on PC, it was decided together with Deep Silver after much discussion that the Epic Games Store would be the best distribution platform option.”

What’s unusual here is that there is no mention of timed exclusivity, just outright exclusivity. This has not been Epic’s MO to date with them typically penning deals for a year of EGS exclusivity, as seen with another Deep Silver published game, Metro Exodus. That one’s due on Steam for general sale again sometime in 2020.

As you might expect, fans who backed the game under the impression that they would be getting a Steam key are less than impressed. There are currently 586 comments on the update at this time of writing, and you can bet that the overwhelming majority are either lambasting Deep Silver and Ys Net for the change, demanding a refund, or both. 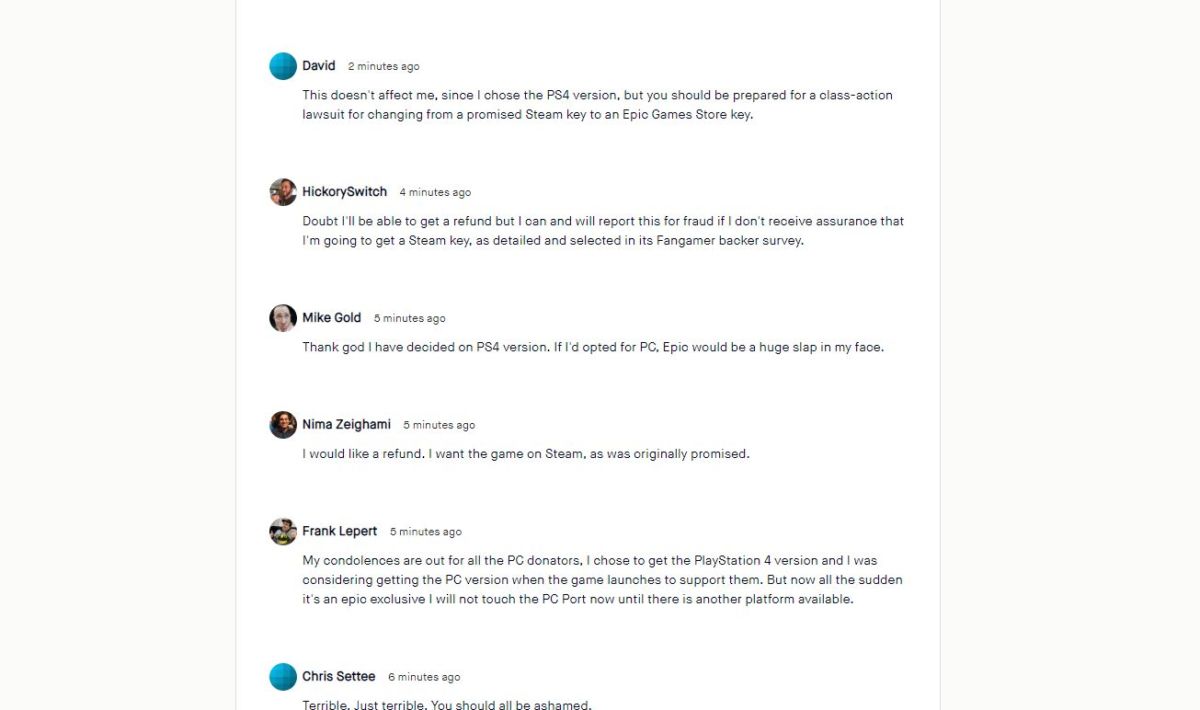 Some are threatening to chase Ys Net and Deep Silver up for fraud:

Doubt I’ll be able to get a refund but I can and will report this for fraud if I don’t receive assurance that I’m going to get a Steam key, as detailed and selected in its Fangamer backer survey.

You owe backers a proper response and clarification to the backlash you knew was coming when you jumped to EGS. We’ve paid for a product on Steam that you’re no longer delivering and this is wrong. Are backers who chose Steam still getting Steam? Is the exclusivity for general retail? My surveys say Steam and still say steam, will this be changing without my notice? You don’t just drop an announcement like this with a fake smile and expect everyone to continue as if nothing happened.

And others point out that EGS didn’t even exist when the Kickstarter began, and that they were just recently sent an update referring to it being on Steam.

The Epic Games Store wasn’t even a thing when I backed the game (4 years ago)!

Heck, this is from an email you sent only six days ago (Update #101):
System Requirements for PC Version
(…) Requires Steam Client to activate.

So don’t tell me an Steam key wasn’t promised..

Deep Silver and Epic weren’t there at the beginning, when the project really needed backing. The fans were… so don’t let us down.

You still have time to make it right (for backers at least).

Interestingly, the Steam page for Shenmue 3 remains active with it still showing the planned release date, indicating that Valve may not have been notified of this beforehand. So you can buy Shenmue I and II on Steam, but can only buy Shenmue III on Epic Games Store. 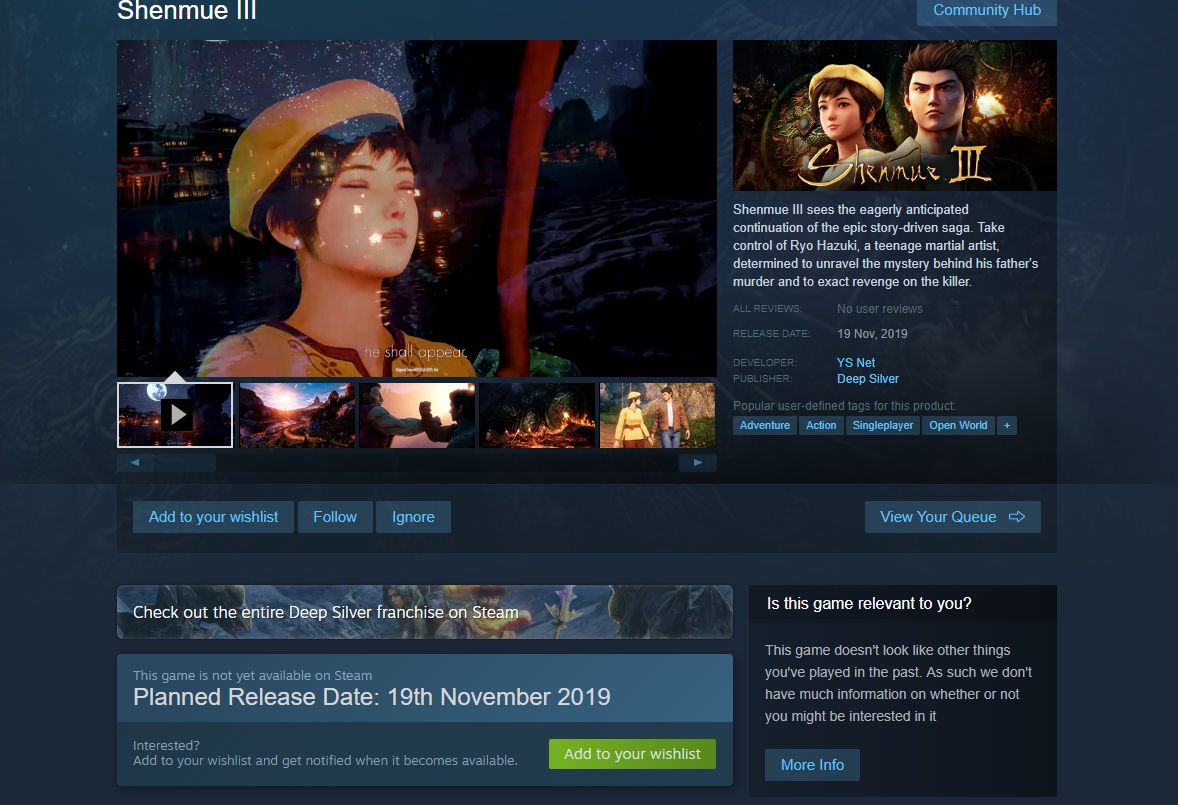 Shenmue 3 was also recently delayed again for a substantial time from an August release date into November. It’s been four years since it was first announced as part of Sony’s E3 2015 conference; Shenmue 3 will still come to PS4.

We will update this piece when/if Deep Silver or Ys Net offer clarification.

Shenmue is due for release on November 19th, 2019 for Epic Games Store and PlayStation 4.

UPDATE 11/06/19: the Shenmue team have sent an email to say that they will not be offering any refunds.

Thank you very much for contacting us.

The launch was previously planned for distribution on Steam, however it was decided together with Deep silver after much discussion that the Epic Games Store would be the best distribution platform option.

We apologize for the sudden change in platform, however, refunds will not be granted for this change.

We thank you for your support and look forward to delivering the Shenmue experience fans everywhere have been waiting so long for.

Looks like Ys Net and Deep Silver are going to have a fight on their hands. Epic Games should know better.