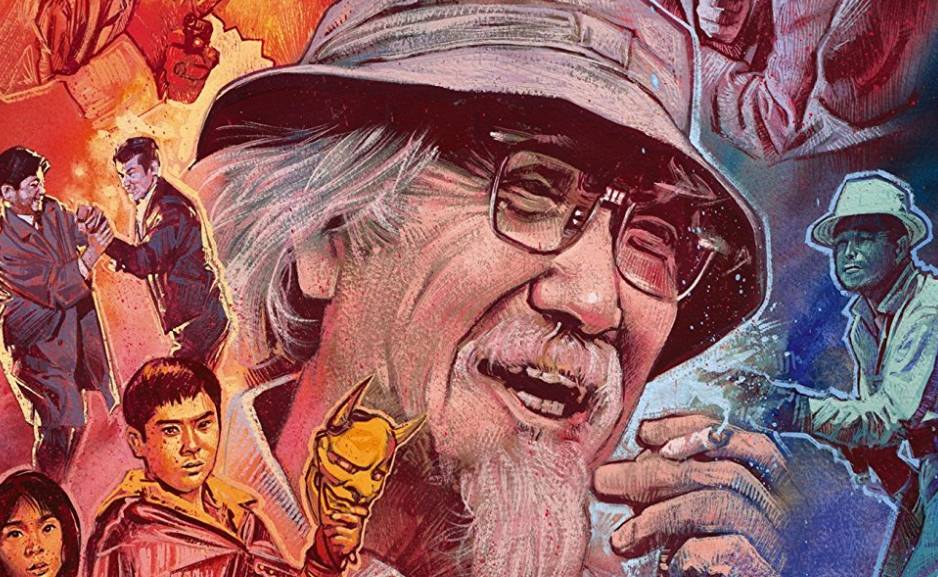 From 1956 to 2005, Suzuki directed dozens and dozens of movies. Many of them were low-budget, character driven thrillers. While many of his films were successful enough in the crowded landscape of Post-War Japan’s booming film industry, it wasn’t until later that works such as Branded to Kill and Tokyo Drifter were hailed as masterpieces of not only the crime and punishment genre, but as movies that could depict a tense, compulsory atmosphere. Just one great Seijun Suzuki film can compel you to watch as many of his movies as you can find. Criterion has released a couple. Arrow Video, thankfully, has taken a much deeper interest in his work.

Seijun Suzuki: The Early Years. Vol 2. Border Crossings is the 2nd Arrow Video box set to highlight the early films of Seijun Suzuki. Both sets reveal a diverse journeyman. Suzuki was a writer and director with the Nikkatsu Company for over 10 years. In that time, he directed some 40 films for the company. Most of these were B-movies, but many of them were successful enough to give Suzuki a favorable reputation. Unfortunately, that didn’t extend to all of Suzuki’s bosses at Nikkatsu. Still, while his time there was often turbulent, and while the films featured here were assigned to Suzuki, and not borne out of some deep need to tell a story, they are nonetheless bursting with creativity. Suzuki worked in a number of genres, but crime at least seems like it might have been one of his favorite subjects. Barring that, it was a subject he could spin into any number of thrilling, timeless films.

One of the movies in this set, The Sleeping Beast Within is a vivid, savage example of Suzuki’s talent for grim, believable dramas that were often set within some very shady, often hazardous circumstances. A newspaper reporter, searching for the missing father of his girlfriend, is plunged hairline-first into a dark, precarious world of violence and uncertainty. The Sleeping Beast Within was made for a modest budget, which you can say about all of these movies. It doesn’t seem like that was ever a problem for Suzuki, who found other ways to be creative. These movies often stick fairly close to the rules and stylistic expectations of their respective types. Nonetheless, Suzuki brought something vibrant and intense to virtually every film he ever made. That trait is consistent within this box set, which also includes Smashing the 0-Line, Eight Hours of Terror, Tokyo Knights, and The Man with A Shotgun.

In some form or fashion, all of these movies deal with lawlessness. The protagonists are often victims, and this is true even when they are committing the crimes. They inevitably become half-mad with thoughts of redemption, revenge, or simple survival. These movies are between 77 and 88 minutes. That should make it clear to you that these are not films that waste time. They move as quickly, and sometimes, as ruthlessly, as the husband who seeks revenge on the murderers and rapists who took his wife in The Man with A Shotgun. Or the men who have to make the best of a worsening situation in Eight Hours of Terror (which was based at least partially on the John Ford western classic Stagecoach). Or those who feel threatened by a potential threat to their empire of drugs and human trafficking in Smashing the 0-Line. Despite being decades old, these movies have an attention to editing, timing (particularly from the actors), and pacing that makes a lot of modern action movies look pretty damn dull by comparison.

These movies are just now being released outside of Japan. To that end, it would be unreasonable to say that the features in this Arrow Video box set box set have influenced filmmakers in the years since their respective releases. If you want to look at it a different way, consider later Seijun Suzuki classics like Tokyo Drifter and Branded to Kill. Although Suzuki continued working until 2005, a career that even included co-directing a Lupin III movie, you can probably argue that those two films represented his creative peak. If not that, then at least that was the point in which Suzuki decided to kick open the door of the potential of his imagination. At that point, he took on the full weight of ideas that didn’t give a fuck if the Nikkatsu Company liked the end result or not. Not surprisingly, those were also the films that sped up Suzuki’s departure from Nikkatsu, which eventually included a lawsuit brought about by the rebellious, iconoclastic filmmaker. Tokyo Drifter and Branded to Kill are two of the most influential Japanese films of all time. You can find unconscious and conscious tributes to those movies in a number of works by artists, including filmmakers, all the world. That certainly includes the United States.

There is a good chance that you’ve seen Branded to Kill and/or Tokyo Drifter. If you haven’t, you don’t need to start with those movies, if you’re new to Suzuki, but it might help. If nothing else, include those with the movies offered in Seijun Suzuki: The Early Years. Vol 2. Border Crossings. The man who directed those two releases is very much present in these earlier works. To watch the evolution of this artist, working within the confines of one of the most productive and successful Japanese film studios, is to watch a truly unique process of growth. Vol 2. From Arrow Video showcases a writer and director who was taking bolder and bolder risks in his works. At the same time, these are tension-heavy thrillers that hit all of the right buttons we want from watching such movies.

To give these movies the context and deeper appreciation they deserve, Arrow is once again offering a plethora of appealing extras. The knowledgeable and lively Jasper Sharp offers a genuinely riveting audio commentary for Smashing the 0-Line. Another feature offers critic/historian Tony Rayns giving a detailed background on these movies, while also placing them in the historical context of Suzuki’s career. Trailers are included, and those are always nice in an archival sense. For me, the best feature for this box set is quite possibly the booklet that’s included. The essay by Jaspar Sharp goes a long way towards setting the stage, not only for the movies featured (in a gorgeous 1080p presentation, as well as a standard DVD version) in this essential collection, but for the man himself. Suzuki was a maverick. If guys like Samuel Fuller appeal to you, and you haven’t heard of Suzuki, consider using this box set as an opportunity to change that.

Verdict
Fans of crime dramas, borderless westerns, and relentless action will want to make sure they purchase Seijun Suzuki: The Early Years. Vol 2. Border Crossings as soon as it’s released on April 17th. These films are essential for fans of Suzuki, or for anyone who just wants the pure, giddy beauty of action movies that are actually filled with things like dread, shock, and intense respect for a true master at work. Review copy provided
10
Cultured Vultures is a pop culture website established in 2013 covering all things gaming, movies, and more. We eat your words.
All The News On The Biggest Games