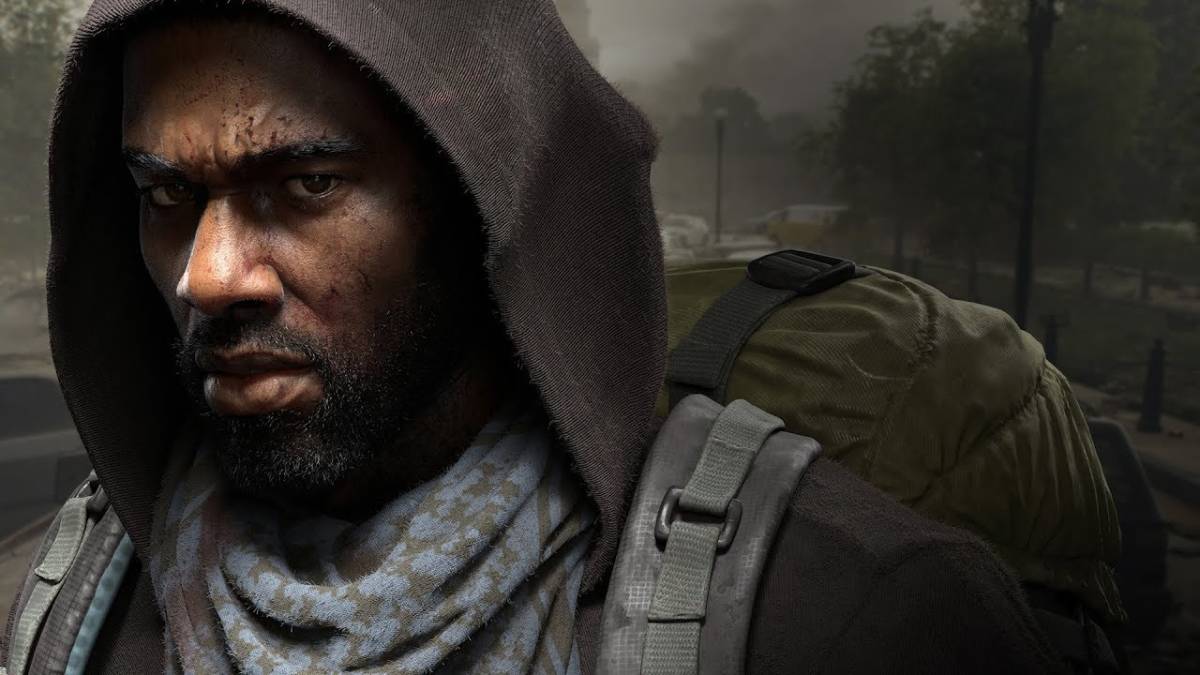 It’s been a long time since Overkill’s The Walking Dead was first announced with a cryptic teaser that revealed nothing, save for the fact that the Payday developers were branching out. That mystery was the running theme for the majority of the time’s game in development, it barely shown before it reanimated earlier this year with some fantastic CG trailers to introduce its characters. Truthfully, it might have been better calling it quits there.

An adaptation of the AMC show, Overkill’s The Walking Dead shares the same universe but is instead situated in Washington instead of Georgia, which thankfully means 90% less walking around forests. As a squad-based co-op shooter, you must work with your teammates to deal with Walkers, take down human opponents, and find far too many fuses. The earliest red flag for Overkill’s The Walking Dead is perhaps the most telling: there is no option for in-game voice chat, which is just as absurd a decision as it sounds for a game that prides itself on being a teamwork-focused and uncompromising affair. 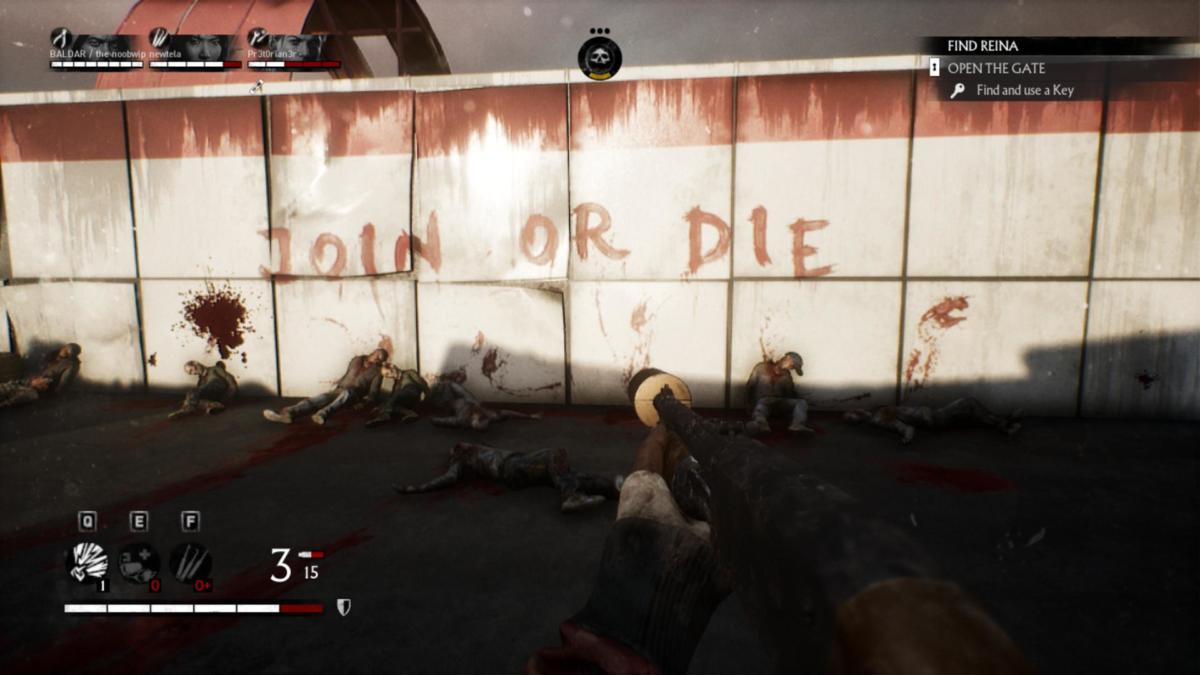 Overkill’s The Walking Dead is a $60 game, but it never feels like it’s worth more than half of that, owing to the fact that it still feels half-finished on almost every level despite being in the works for four years. At this point in time, it’s like playing a proof of concept over the thing you’re paying a premium for on day one, a skeleton to be beefed up and fixed with future updates.

It’s a shame, because Overkill’s The Walking Dead can actually be quite fun (in short bursts) and surprisingly deep at times. There’s nothing revolutionary here, but there should be enough to satiate The Walking Dead fans or anyone wanting their Left 4 Dead fix. Comparisons to Valve’s mistreated franchise feel inescapable, but OTWD really has more in keeping with something like Vermintide or Dead Island, the latter more so because of how cobbled together it feels at launch. 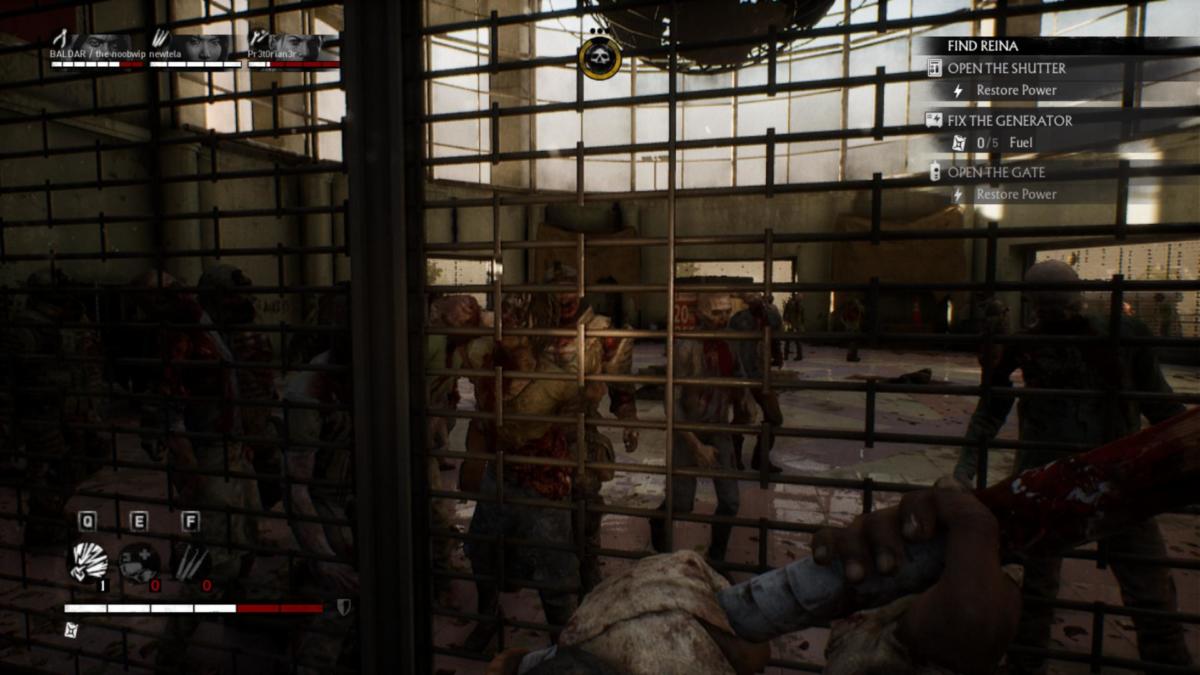 Most of your time with OTWD will be spent caving in heads of Walkers, which may mean that you need to do some hand exercises to negate cramp — you will be clicking a lot. As someone who consumes zombie media as mindlessly as the walking cadavers themselves, this was not an issue for me as I enjoyed creating walls of death with my teammates as we valiantly knocked back the hordes. That they lack variety in appearance is a bit of a wasted opportunity, however: who knew there was such a generic bald person pride movement going on in Washington?

To its credit, OTWD is ingenious in how it handles the player vs. zombie (PVZ, if you will) side of things: the more noise you make, the more Walkers you attract. This creates constant tension that begs you not to panic; unloading with firearms will often make your chances of survival slimmer, not greater. Most weapons can come equipped with silencers but their uses are finite, meaning that you have to thinking tactically, lest you face the wrath of the walkers and also your teammates as they hammer “noooo” into the game’s archaic text chat. 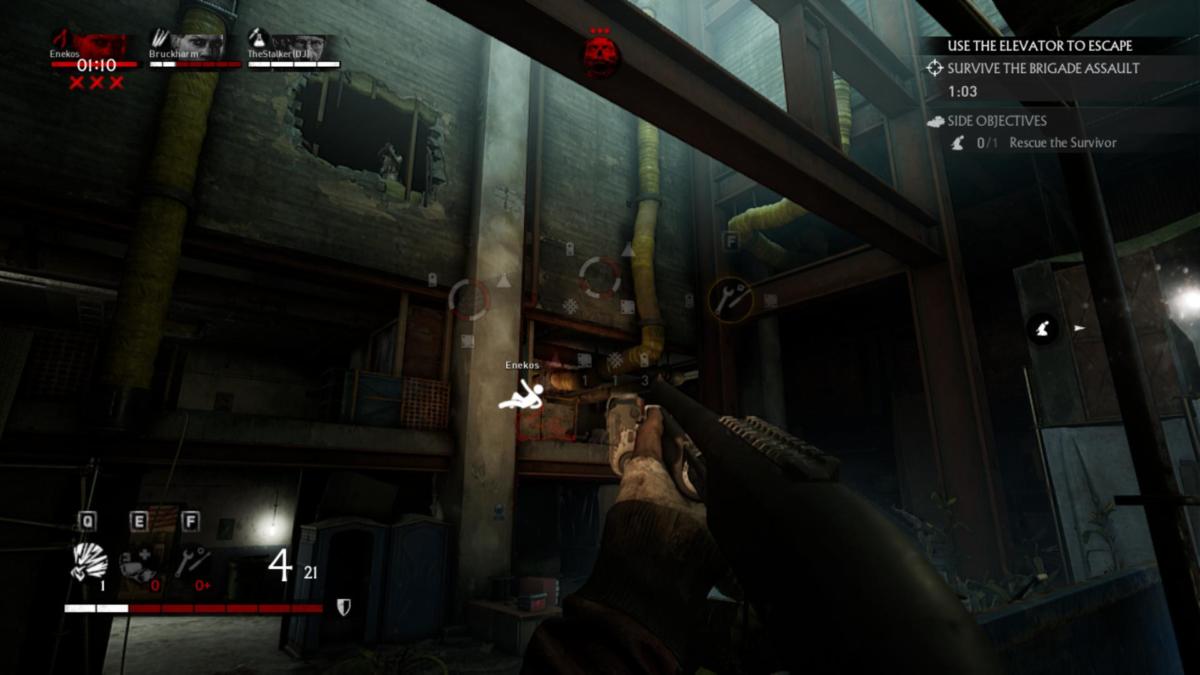 Overkill’s The Walking Dead does its best to try and foster teamwork by throwing puzzles at players during missions, which are usually just a case of finding switches and fuses or figuring out a combination. The majority of your time during OTWD’s story will be spent creeping around grey, suitably grim areas and looking for an objective, though it does occasionally spice things up with some woefully implemented siege missions that shine a less than positive light on the game’s human AI.

To call Overkill’s The Walking Dead’s human combat robotic would be a disservice to J.A.R.V.I.S. and his kind. It’s utterly insipid and brainless with your attackers standing in place and being barely capable of reacting to your actions, which is the case even on the highest difficulties. The game makes these encounters artificially difficult not by throwing smart and adaptive enemies your way, but by just sending in a nearly endless parade of identikit soldiers, who all walk into your camp eerily in sync. It’s brainless and joyless, especially as it’s not the kind of game where you can tactically take cover — I’ve been phantom hit by bullets and grenades despite having plenty of environmental safety blankets. 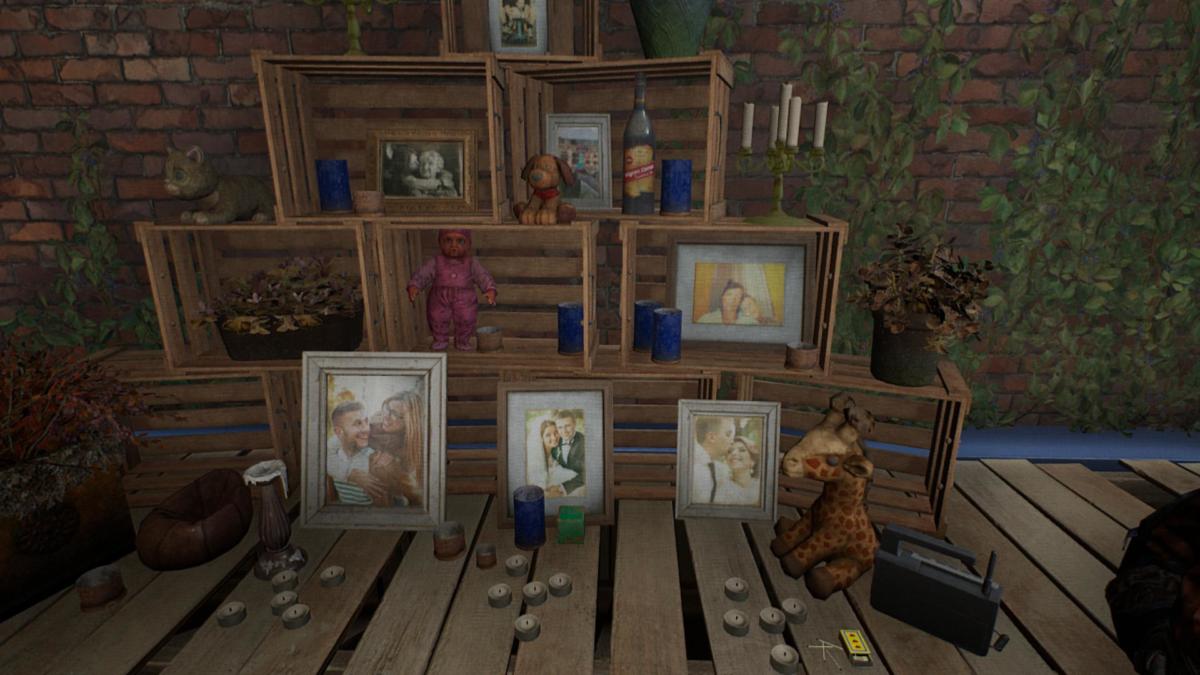 Fighting the same enemies over and over and doing the same things over and over could be excused by a decent story to keep things interesting, but Overkill’s The Walking Dead also sadly staggers in this regard and doesn’t offer much to latch onto. The pre-release trailers remain just that, the narrative relegated to basic slideshow cutscenes that serve their purpose but ultimately don’t deliver. If you were looking for a closer look at Maya, who for my money had the most captivating trailer, you’re going to be left disappointed. Likewise, Grant’s grandchild is mentioned in passing during gameplay but is never a focal point. Instead, it’s the same glum humdrum that has dragged the show itself down: survivors fighting other survivors.

One of the bright lights of Overkill’s The Walking Dead is actually tied to the narrative, however. Bearing a passing resemblance to The Last of Us’ multiplayer, you must keep your camp stocked by finding supplies and assigning survivors to roles. It’s very RPG-lite, but it works competently enough to make it something that you could micro-manage if you so wish. I mostly neglected it as simply playing missions meant my camp was never in any turmoil, though there would have been plenty to tuck into if I was inclined. Building up and improving your camp is a necessity to unlock better upgrades (even if those “improvements” are minimal at best with your “Combat Rating” being a negligible statistic to be aware of), though there is a grind to complete different missions on higher difficulties if you want to unlock better items. There’s an uphill battle here that loot fiends will probably adore, but the barely noticeable enhancements made it easy for me to personally ignore. 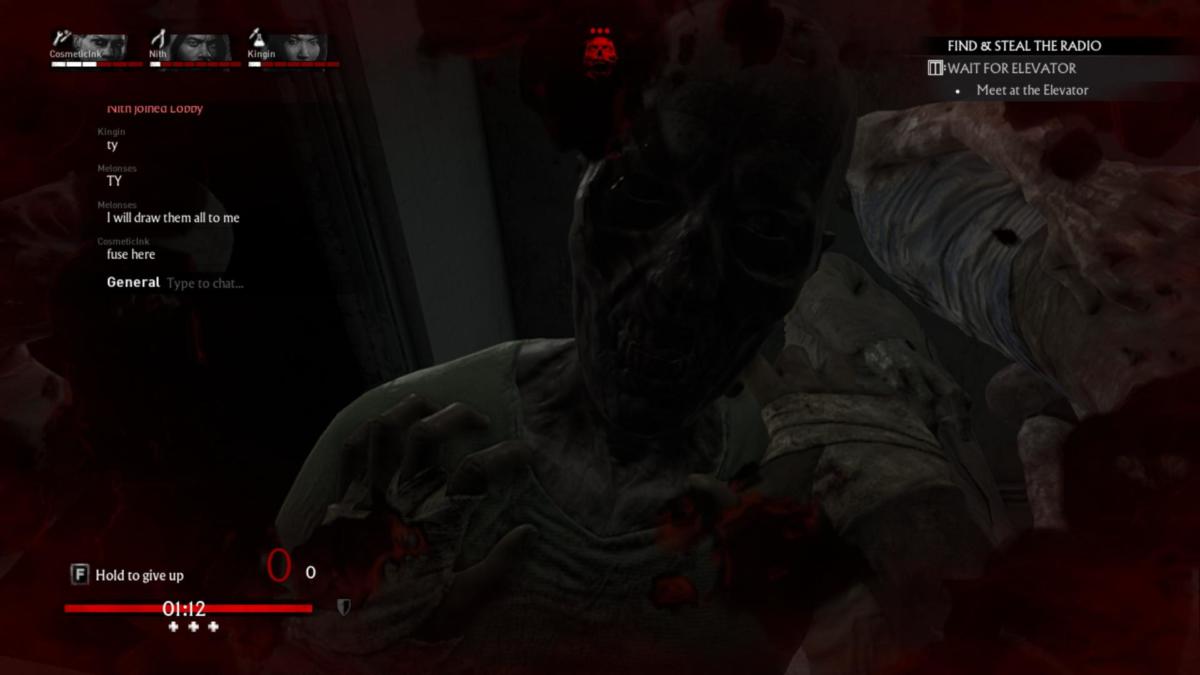 What I could not ignore, however, was the current state of the game. Overkill’s The Walking Dead feels like a clumsy effort with its heart in the right place at best, a total hack-job that was cynically pushed out of the door before it was ready at worst. It’s far too common a practice for modern games to be released under the “patch-it-later” ethos and Overkill’s The Walking Dead unfortunately continues this unwelcome tradition.

Loading times are frequent and prone to crashing, as well as some videos just not loading at all — I’ve stared at completely black screens far too frequently. I’ve had zombies completely disappear in front of me with another bunch just appearing out of nowhere and try to take a bite out of me. Enemy soldiers have channelled their inner Bolt and sped across the map. Walkers have teleported up stairs and grabbed me. I’ve loaded a match to watch every zombie in a T-pose before then being dropped right into the middle of a herd. The list of issues with the game is as long as The Sins of Freck from A Scanner Darkly. 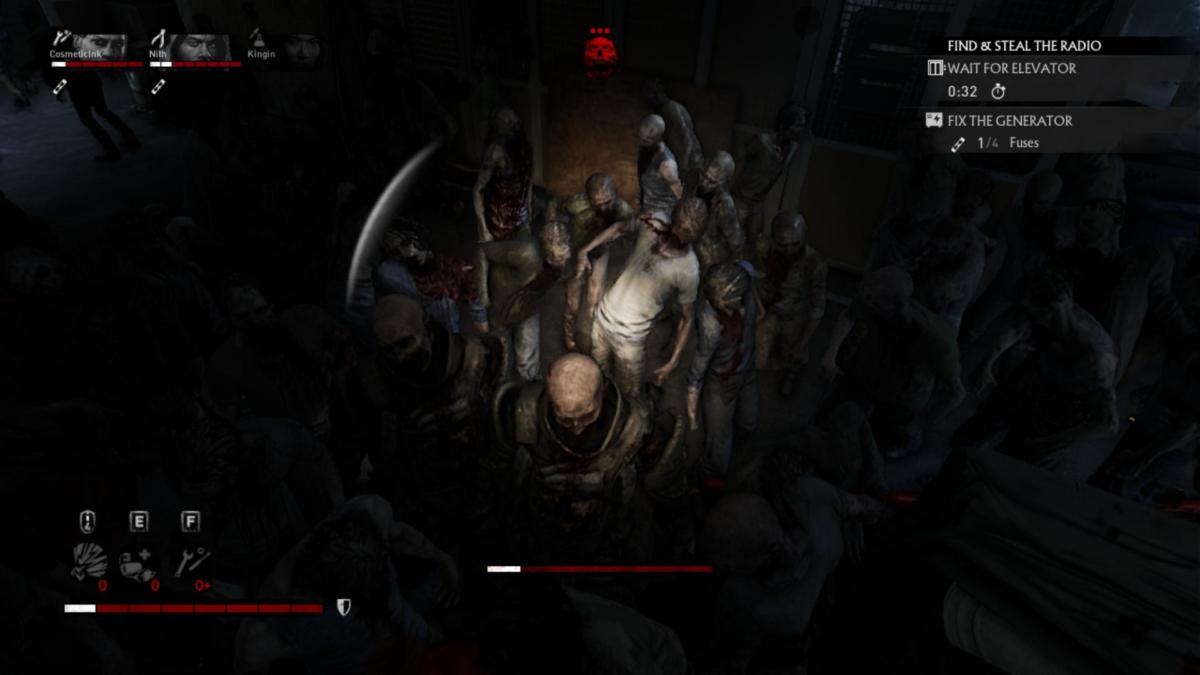 Whenever I’m starting to grow fond of Overkill’s The Walking Dead, it does something beyond idiotic and poorly-designed to bring the resentment flooding back. One instance even made me think that Overkill personally had it out for me. A bear trap was spitefully added right next to a getaway car, presumably as one last “gotcha” for what had been a testing mission, one that I hadn’t even chosen to play to begin with. On three separate occasions, the game threw me into a mall mission when I had selected something different; the same had happened to my squadmates.

There is potential to the game, but you might be hard pressed to find any hints of it when they are buried deep beneath such glaring, inexcusable flaws. Anyone who snaffles up anything even vaguely connected to the AMC show will likely find something to enjoy here, but anyone looking for fun co-op zombie action that doesn’t waste the time or test the patience of its players — and I can’t believe this is something I am about to type — might be best served waiting for the World War Z video game adaptation instead.

Verdict
Overkill's The Walking Dead is a fundamentally turgid time with vague glimpses of fun that are snuffed out by repetitive gameplay, awful firefights, and constant technical downfalls. Microtransactions: none
4.5