Rust Just Had Its Most Popular Day Ever

The misanthropy simulator that is Rust just keeps going from strength to strength.

Despite having been out for many years now and definitely being an acquired taste (read: likely to corrupt you beyond recognition), Facepunch’s Rust has just enjoyed its most popular day since it launched with a record amount of players making their way to the survival game.

Steam Charts indicate that Rust had a handsome 97,430 players on Friday, January 3rd, beating out the previous peak set in July 2019. 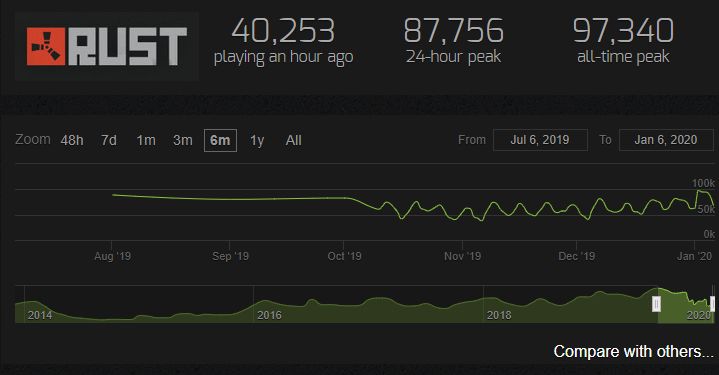 Rust has enjoyed a gain of +8.34% players over the last 30 days, though it did have a dramatic increase of +37.95% during July. It seems like players returned to Rust over the Christmas break with newcomers also entering the mix, helping the game to hit its peak.

Owing to the game’s unforgiving nature, Rust usually hits big numbers whenever there is a wipe. In Rust, wipes essentially hit the reset button on player progress on servers, meaning that there’s always a scramble on wipe day to make sure players secure a base, and therefore a good start, early on. I logged in myself on wipe day and failed spectacularly to not get battered by rocks and spears.

Having launched in a promising but rough state in December 2013, Facepunch have worked hard to add and improve to Rust over the years, 2019 seeing huge additions like horses and minicopters. It will be interesting to see what they add in 2020, but one thing will always remain the same: don’t trust anyone in Rust.

In Rust, players simply have to survive. After spawning on an island with only a rock and a torch, players can either try to forge alliances or go it solo, making slow progress on their way towards better loot while taking on AI and PVP raids. Graduating from Early Access in February 2018, it was also recently announced that Rust made its creators, Facepunch, more money than the cult classic Garry’s Mod.

READ NEXT: 25 Best Survival Games You Should Play