Rollerdrome Is Perfect For Steam Deck 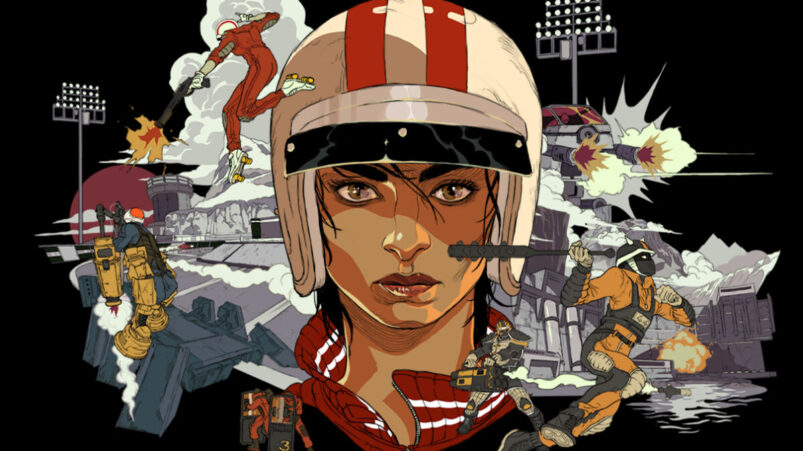 It’s quite fascinating to see how games can be improved by taking an established formula and going “but with guns”. Palworld, for instance, has made huge waves for looking like a game that gives Jigglypuff a Kalashnikov, but its the roller-skating, rampaging Rollerdrome that has caught my eye the most. If you thought the extreme sports games of your youth weren’t quite extreme enough, Rollerdrome is here to give you what you need, especially if you can get your hands on a Steam Deck.

Developed by Roll7, the minds behind the massively popular OlliOlli series, Rollerdrome is an equally gnarly action game set in a neat future in which the titular bloodsport is all the rage. You play as Kara Hassan, a new competitor in this ultraviolent crowd-pleaser designed to quiet the masses, as you look to climb the rankings, one wallride and kickflip into a shotgun blast at a time.

RollerDrome feels intuitive and satisfying to play almost immediately, with a simple tap of A or X on a controller setting you of on your rollerskates, themselves easy to control and smooth. Holding down B or circle readies you for a jump, while pressing X or square and any number of directions will perform a grab, which can also then be modified with RB or R1. Rather than just letting you style on enemies, performing tricks actually has a purpose: reloading your ammunition. It’s immensely satisfying to duck and dodge out of the way of fire in slow motion as you return the favour, then perform a trick in mid-air and earn enough points to reload your grenade launcher to rain down mayhem from above, all in the space of a few seconds.

The main aim of the game is simply to kill the waves of enemies that come your way, with the final enemy keeling over in all of their slo-mo arcade-y glory. Players can also aim to get high scores by racking up combos, which can be maintained by killing more enemies, collecting combo coins, and tying moves together across the arena by grinding and wall-riding in-between. However, there are also THPS-esque challenges that ask you to complete specific feats, such as performing certain tricks while killing enemies, racking up a massive combo, and so on. Rollerdrome with have plenty of replayability for those who dig its destructive brand of dystopia.

Rollerdrome also has quite a distinct, eye-catching aesthetic that can only be described as “rotoscoped mescaline”. The environments are vivid and gorgeous despite consisting of somewhat flat textures, with the game’s fairly low performance demands also making it an absolutely brilliant pick for the Steam Deck. The palette positively pops on the Deck’s LCD screen, and the action never faulters with it comfortably hitting 60fps at all times. This makes Rollerdrome easy to pick up and play on the go, a super fast, super intense shooter with easy controls that don’t require your fingers to be constantly dancing all over the inputs. It’s easy to see a lot of people choosing to play on their Deck, and I’ll be one of them.

However, it’s worth mentioning that despite it being a relatively easy game to grasp, Rollerdrome itself isn’t all that easy — these are the OlliOlli devs, after all.

The game has a difficulty curve that’s basically just a skyscraper, with it wasting absolutely no time in throwing utter chaos your way. You can barely catch your breath at points, even in the game’s earlier stages, so you have to pretty much be “on” from the moment your skates start spinning. There’s so much going on and so many rather irritating enemies that it’s difficult to really be expressive sometimes, with you having to dodge constantly and chase down the most incessant of enemies as soon as you can.

Some players might find Rollerdrome a little exhausting, exasperating even, but for those who love the likes of Neon White and My Friend Pedro, look forward to your next likely obsession on August 16th.

A Steam key was provided by PR for the purpose of this preview.