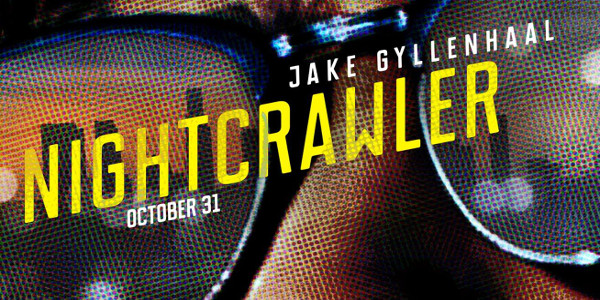 We all have ambition in our lives. Dreams and aspirations we want to see fulfilled before we eventually kick the bucket. These hopes and dreams can stem from our childhood or a recent revelation. Perhaps there’s a newfound talent that you’ve recently found a love for and without warning, something’s hit you and you’ve suddenly realised this is what you want to dedicate the rest of your life to. These things are what drive and motivate us. Some of you may want to be doctors, teachers, writers, actors or even own a business. These goals in our lives can shape us and more importantly how others perceive us. We commit our hearts, minds and our souls to them in hopes of achieving greatness but how far would you be willing to go to get it?

For Lou Bloom, it appears, there are no limits. 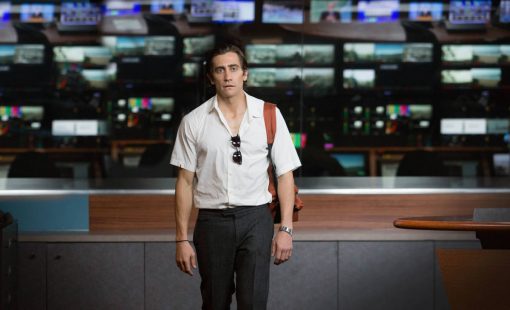 Nightcrawler follows the ambitious, intriguing, charming, mysterious and simply repulsive Lou (Jake Gyllenhaal), his complex journey into the seedy underbelly of Los Angeles and the sordid world of freelance crime journalism. When we meet him it is immediately apparent that he’s driven, confident and charismatic, if a little odd. The very first words that are spoken in the film come from Lou himself as he declares ‘I’m lost’ to a suspicious patrol guard, who finds him breaking into private property. It isn’t merely a coincidence that these are the first words he utters, Lou is very lost. Lost in life. He doesn’t have a job or set goal. He simply wants to be a success and it’s also clear from the outset that this is a man who is entrepreneurial both in mind and spirit. This man is going to get exactly where he wants or die trying.

This film is a car crash. Not in the way Nicolas Cage’s career in recent years has been a car crash. No, I mean it as absolute high praise. When you’re stuck in traffic on the motorway and you slowly drive past a horrific car accident on the side of the road you have an unrelenting urge to look. Whether it’s a subconscious decision we make or not, we still turn our heads in  shameful anticipation of seeing something shocking or any sign of injury. We covertly eye up the scene of the incident, looking for details and trying to piece together some kind of story in our heads. However, when we look there may come a time when we wish we hadn’t, in which we’ll see something we regret. Nightcrawler puts you in that uneasy position, as we see the overly enthusiastic Lou film these horrendous events on his camcorder, we can’t help but look, we want to see more. This film taps into our unspeakable, almost perverse desire to witness the bloody and gruesome. It examines that fine balance between not seeing enough and seeing far more than we ever wanted. However, I will never regret going to see Dan Gilroy’s enthralling new thriller.

Just like the main character himself, this film is gripping, captivating and pulls you right in. Jake Gyllenhaal delivers an absolute tour de force performance here, which will undoubtedly will see him racking up award nominations come early next year. He truly is spellbinding and clearly has lot of fun with the role. If his performance didn’t work and he stopped dazzling the audience for even a moment then the film would have torn at the seams and Gilroy would have lost us. I’ll never be able to look at his smile the same way again, regardless of where I see it. In this film it shouts a thousand words. It’s a smile that forces us to smile along with him, owing to his questionable charm; but it will also make you feel sick to the stomach. It’s one of the most layered performances I’ve seen this year, so much is happening and you’re constantly trying to deconstruct him, only for him to become more illusive.

Lou stumbles upon the nocturnal trade of filming accident and crime scenes, and realises he may have found his perfect profession. He has all the qualities needed, he’s confident, fearless and doesn’t have the moral barriers we all have. He doesn’t feel guilt for his actions, he doesn’t have filters for his emotions and he doesn’t need them. He sums up the morality of his chosen career in a memorable line: ‘if you’re seeing me then you’re probably having the worst day of your life’. We should hate Lou Bloom but frighteningly, we don’t. He brings out that little devil on our shoulder and makes the angel disappear. Even though we question and disapprove of nearly all of Lou’s actions and motivations, we have that sickening and horrific urge to go with him on every step of his journey. We reluctantly want to see what twisted and deranged act he’ll commit next. We want to know how far he’s willing to go. We need to know. 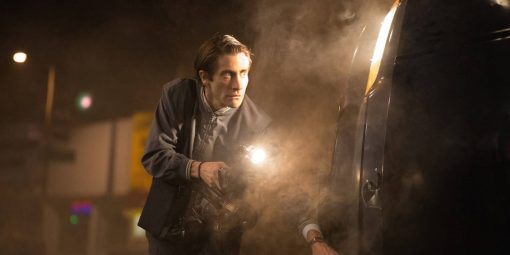 Lou is an epitome of the American dream even if by the end of the film he destroys it’s very values. He needs to achieve success and won’t let anybody stand in his way, especially the people closest to him. Lou lives by a simple motto: ‘If you want to win the lottery, you have to make the money to buy the ticket’. Things first begin to escalate when we see Lou arrive at scenes too late, surrounded by red and blue lights. The police are his competition and being beaten by them is unacceptable to him.

He begins to tamper with the scene of a recent crime in order to find that perfect shot but even that isn’t enough, resulting in him manipulating a situation in which he is able to film a murder taking place. Another unsettling moment comes when he strikes gold, arriving before the police, we see him visibly shaking with ecstasy and adrenaline. He gets off on it. Will there be a limit to his depravity? Where will it stop? Will this result in Lou finally holding the murder weapon? Is there a soul behind that perturbed smile and those piercing eyes? Was there even one to begin with?

There are drawbacks however, as through the course of this film I did begin to feel like these interesting and engrossing themes, were being beaten over my head. At times I felt like the script’s occasional forced messages and satirical views were being forced down my throat. This issue also emerged in the somewhat overrated 1976 film, Network, which also evaluates morality and integrity in news media. That film also descended, not only into heavy-handed and forced messages but also into over the top satirical cartoonish-ness. Nightcrawler never goes this far, it is far more restrained than Network and far stronger. Minor subtlety issues don’t fully detract from the entertaining thrill-ride you are on. The themes covered in this film may not be wholly original but Gilroy finds fresh and exciting ways to explore them.

Lou isn’t always alone on his nocturnal activities. He hires Rick, an anxious and hesitant young man as his intern who he puts on a measly salary, as they drive around throughout the night waiting for lighting to strike. I found myself yearning for more screen time for Riz Ahmed’s character. Not only did I want to see more of him because of Ahmed’s surprisingly strong performance but also because I felt Rick needed a bigger role in the overall story. He is in many ways the audience’s voice, questioning Lou and his behavior. I felt the film would have benefited a great deal spending more time developing this character and the pay off would have packed even more punch. 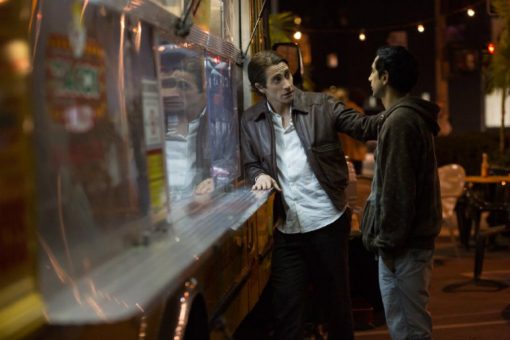 This films marks one of the strongest debuts from a director in recent memory. Dan Gilroy (writer of The Bourne Legacy & Real Steel) finds a unique voice with Nightcrawler, he turns what could have been a slow and indulgent film into an entertaining, adrenaline-fueled rush which holds our attention for its entire length. A scene that sees Lou and Rick tail a group of criminals to a diner shows an almost masterful control of suspense and build up that’s reminiscent of a Hitchcock film. The tagline to the film is ‘The City shines brightest at night’ and boy does it shine. Robert Elswit’s cinematography really makes this so-called city of ‘angels’ sparkle and the night time is a mirage of colourful Christmas lights that pop on screen. His control over lighting and contrast is visually reminiscent of 1950’s film noir. Even though it may seem beautiful externally, Elswit really exemplifies the sleaze and moroseness beneath.

This film will raise the hairs on your neck, your pupils will dilate and you’ll laugh. You will feel sick, uncomfortable and angry. Your heart will pound, your fingernails will fuse with your seat and beads of sweat will drip down your forehead. You’ll question your own ethics and morals and you will not forget this film anytime soon. It is an undeniable must see.