A welcome part of the gaming calendar this year. 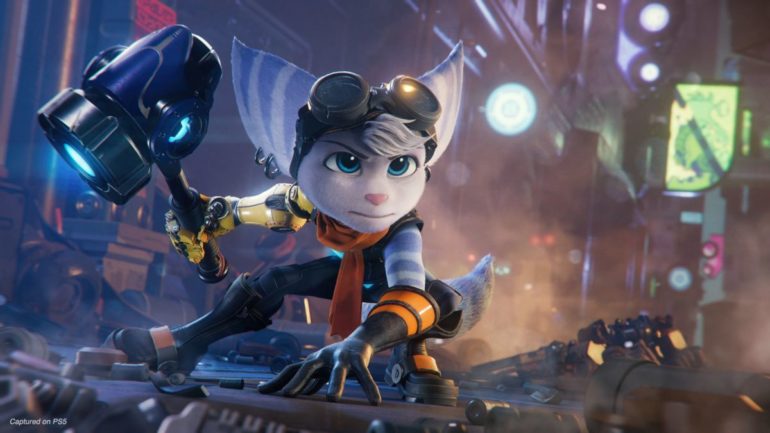 2021. It has been what some call “a year”. To celebrate this collection of sun rotations, we’re looking at the best games of 2021. Next up: Ratchet & Clank: Rift Apart.

Truth be told, before Rift Apart, I was never exactly the biggest fan of the Ratchet & Clank series. They were fun, but they were never something I invested in long-term. Before buying Rift Apart, the only R&C game I’d ever finished was Deadlocked, which is just constant arena fights and nothing else, so it’s hardly the best representative of the series. Heck, I only decided to play and finish 2016’s Ratchet & Clank because I bought Rift Apart. Why would I bother playing it if I started the new one first?

With all that baggage to deal with, hopes were middling when booting up Ratchet & Clank: Rift Apart. Well, they were still high actually, considering I’d blown nearly £600 for a PS5 with a copy of the game, so Rift Apart better have blown my socks off otherwise I’d be looking at an oversized, overpriced, router-looking paperweight.

As you can tell by this article, Rift Apart lived up to the challenge.

Dissecting why Ratchet & Clank’s new outing is such a big hit is tricky, because it’s not exactly the most groundbreaking release in the PS5’s portfolio. Arguably, you could pick up one of the first Ratchet & Clank games, then play Rift Apart and there’d be a lot of similarities. From controls to gunplay and more, Ratchet & Clank found a winning formula and has stuck with it throughout the years, and Rift Apart just happens to feel like the most refined version of that.

Perhaps that’s to the credit of the power of the PS5 and the DualSense which allows the series to truly revel in its own bombast. All those explosions, weapons and particles flying everywhere might have felt less impressive in earlier games, but they’re really given the chance to shine here in 4K and at 60fps, and the Dualsense enhances the whole experience, even if that’s just with the controller’s in-built speaker making noise every time you pick up a bolt. Every one, a dopamine hit.

While the gameplay is top-notch, Ratchet & Clank: Rift Apart seems to succeed more because of its excellent story and characters. The overarching narrative is about as Saturday morning cartoon as the game intends to be, with a flamboyantly over-the-top villain attempting to bring catastrophe to all dimensions, but it’s how Insomniac explores the space and characters in between press start to end credits that makes the story really sing.

For lack of a better term, Ratchet & Clank feels like a mental health exploration for the characters involved. For Ratchet, we get to see this galaxy-saving, bad-ass hero deal with imposter syndrome and anxiety because he’s worried he might not be what the Lombax race want when he finally goes to meet them. What if he’s a disappointment? The sight of Ratchet grappling with this side of himself might seem out of place for someone with a resume as glowing as his, but it still feels earned. Who hasn’t accomplished something great, but still struggles under the weight of expectation, whether that’s earned or even presumed?

As for the newcomers, a lot was made of Rivet, the female Lombax and fellow playable character, when she was revealed, and while she’s a fresher face with a new perspective on the chaos that is the R&C series, it’s actually Kit that stole the show for me. Her insecurities due to her past wrongful decisions cause her to isolate from people in fear that she’ll hurt them more. It’s a battle that’s incredibly relatable to me, making her battle to overcome that internal struggle through the characters she meets throughout the game hit closer to home.

While Rift Apart definitely maintains the humour that the series is known for, and the script writing absolutely earned a couple of chuckles throughout the game, this new version of Ratchet & Clank feels like the series has grown up. It’s still the same series that it always has been, filled to the brim with weapons and enemies you can blow up, but there’s a level of maturity here now.

The main character doesn’t just need to be wise-cracking, galaxy conquering ubermensch, or should that be “uberlombax”? Rift Apart shows that you can add some emotional layers to your video game protagonist, yet still maintain the laughs and thrills that this long-running, beloved series has become known for. Games can explore deeper themes and mine for emotional resonance without resorting to being a “gritty” adventure. Ratchet & Clank are older and wiser, but still haven’t forgotten what made them popular in the first place.