Ranking the Deus Ex Games From Worst To Best

We actually did ask for this, actually. 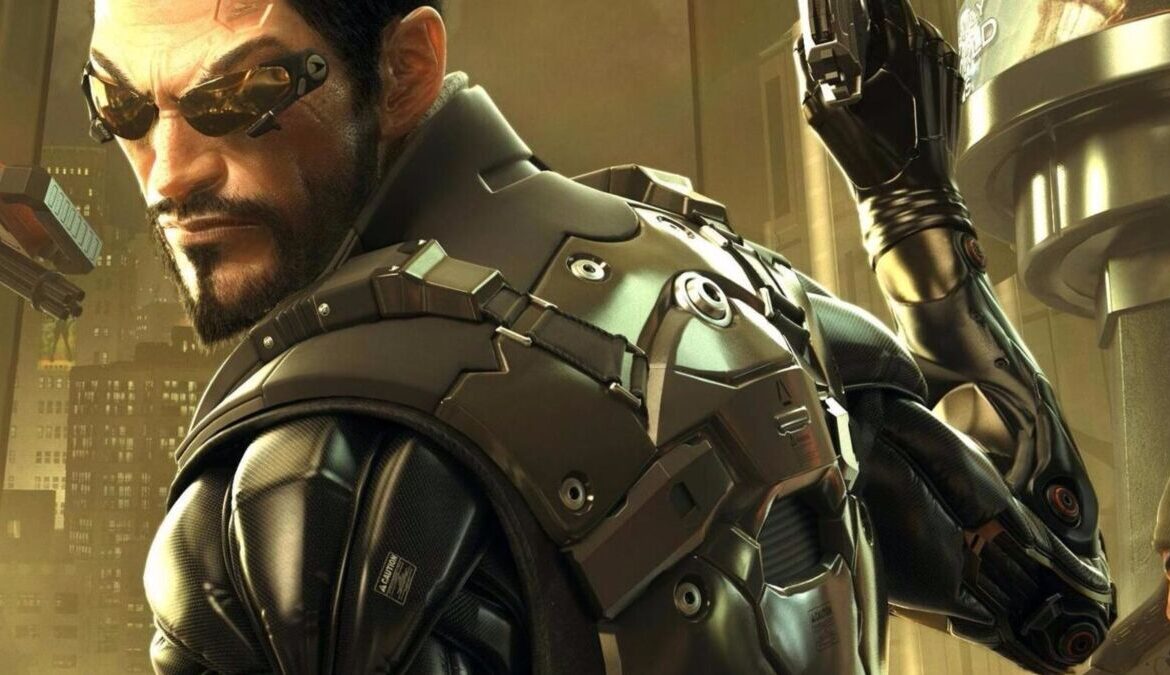 It’s not an easy time to be a Deus Ex fan. The sepia-soaked cyberpunk series has laid pretty much dormant since its last release six years ago in the shape of 2016’s Mankind Divided, and with Square Enix seemingly determined to run its Marvel’s Avengers property into the ground, it might be a while before Adam Jensen dons his cyber-shades and trench coat and starts hacking cameras and stabbing people again, even if it now lies in the hands of those over at Embracer.

With seven games in the Deus Ex series from which to choose (depending on your definition of what constitutes a proper ‘game’), it can be hard to get the lay of the land or to know where to start with this sprawling sci-fi franchise.

What could be better, then, than an unequivocally definitive ranking of every game in the Deus Ex series? Impressively for a semi-major AAA series, there are very few genuinely poor installments in the Deus Ex canon, while many finer releases are now regarded as iconic titans that true gamers must experience as a matter of dutiful course.

Reaction to Deus: Ex Breach ranged from bemusement to anger to genuine confusion. Considering the fact that Breach was, to many, one of the least popular aspects of Mankind Divided, it seemed odd that Square Enix / Eidos Montreal would put out an entire game dedicated to the maligned mode.

Breach is set in the virtual world of the Neural SubNet in which a hacker contacts other hackers that a security breach at the Palisade Bank data facility has occurred and it’s up to the second lot of hackers to make hay and extract some data while they have the chance. It’s a premise that ends up as strange and confusing as it sounds, and it never really caught on, especially as it asks you to pay real money for ammo.

Released as a standalone free-to-play game in January 24, 2017, Breach now boasts around three to four active players at any one time and an all-time peak of 84 players, according to Steam Charts. Not exactly Fortnite numbers.

The Deus Ex franchise was never just consigned to consoles or PCs. The Fall took things mobile by bringing the series’ iconic cyberpunk world to the tiny screen, once again melding together RPG, FPS and stealth elements into one relatively competent single-player package.

The Fall was essentially more of the same stuff that die-hard fans had come to expect, the same Illuminati groups sitting in the background being nefarious, the same well-realised cyberpunk future where augmentation has only deepened the rifts of an already fractured society. All good stuff, of course, but nothing particularly ground-breaking.

Reception to The Fall was pretty tepid, however, although the iOS version garnered far more acclaim than its PC counterpart. Critics praised the presence of all the things that make a good Deus Ex game tick, but bugs, tricky controls and a sub-par story were all cited as being below the series’ premium standard.

In the same way that not every Deus Ex game has to be a console or PC release, not every title has to be an RPG FPS hybrid with stealth elements and skill trees. Enter 2016’s Deus Ex Go, an outlier release published by Square Enix Montreal that brought Adam Jensen kicking and screaming into the exciting world of turn-based three-dimensional puzzle games with surprising success.

Like Square Enix’s other turn-based puzzlers Hitman Go and Lara Croft Go, the player is tasked with using their touchscreen to move diehard sunglass enthusiast Adam Jensen through a board game-style environment while attempting to avoid obstacles and enemies and interacting with helpful environmental prompts. As this is Deus Ex, Adam can hack various objects, terminals and environmental features to get through the game’s various stages.

While it may sound like an unwelcome departure for the series, the franchise actually translates quite well to its new format, receiving positive reviews upon release. It’s never going to go down as the greatest Deus Ex game of all time, but for what it is, Go does a pretty decent job.

Despite having some of the worst cover art this side of a North American copy of Mega Man, Invisible War is actually an extremely competent addition to the Deus Ex canon.

Set the furthest forward chronologically in the series, Invisible War brings players into the year 2072, a time when secret organizations and conspiracies are now running the show from behind the scenes and personal freedoms have all been surrendered to the will of the state. While it sounds a little silly on paper, the follow-up the original Deus Ex garnered praise for its satisfying narrative and voice acting at a time when most contemporary titles were still operating at Resident Evil levels of clunky thespianism.

Back, too, came many of the features that had so enamoured gamers with the first Deus Ex game, including an emphasis on player choice and the availability of multiple biotechnological enhancements. Still, issues regarding sloppy AI behaviours, as well as drops in frame rates and performance issues on the Xbox version, meant that Invisible War was never quite able to outshine its celebrated predecessor.

A good game that ultimately fell short of being a great one.

Rather appropriately for a game titled Mankind Divided, the most recent mainline Deus Ex game is likely also its most divisive. Acting as a sequel to Human Revolution, Mankind Divided sees the seeds sown by its predecessor’s narrative start to bloom in earnest as new biomechanical technologies drive a wedge between those in favour of human enhancements and those who are against.

This wedge provides a compelling backdrop to the game’s action, with plots and conspiracies always lurking in the background and giving proceedings a feeling of tension and unease. It’s not hurt by the fact that the game’s setting of a futuristic Prague is possibly the best to date, a wonderfully contrasting and anachronistic settlement that provides a refreshing departure from mainstream gaming’s constant reliance on New York, London or faceless, generic American cityscapes.

Mankind Divided wasn’t without its problems, however, an exploitatively-structured tiered content release system leaving customers unimpressed before they’d even had a chance to boot it up for the first time. The game’s abrupt and seemingly unfinished ending, meanwhile, sparked rumours that Eidos Montreal had removed the true conclusion so that later releases could cynically fill in the gaping narrative gaps. Fans, again, weren’t exactly impressed.

Mankind Divided boasted so many great intrinsic qualities, an immensely competent experience that was ultimately robbed of its glory by poor decisions and an air of corporate greed that it simply couldn’t escape. With a frosty reception and underwhelming sales, Mankind Divided may have ushered in the end for one of gaming’s most underappreciated and undervalued franchises.

The original Deus Ex is still considered to be a gaming masterpiece, a hugely innovative and polished game that pushed PC gaming into the 21st Century. As is an inevitable reality, however, especially in an industry that moves so fast, the ground-breaking FPS has started to show its age. Deus Ex remains fantastic, still sublime and immensely important to the history of the genre, but the experience of digging out a game from so long ago inevitably leads to a little disappointment.

Set in 2052, Deus Ex is a relatively futuristic installment in the franchise’s back-and-forth chronology, with many of the series’ major themes of big-state intervention, surveillance and advanced body modifications very much in full swing. Despite a glaring lack of an Adam Jensen to look cool and smoke cigarettes in glowing orange rooms, the original Deus Ex proved that games, not just movies, TV and literature, could tackle weighty subjects with insight and grace. Plus, Deus Ex has the benefit of the “original” Deus Ex protagonist JC Denton, the man who made wearing shades at night before Adam made it cool. Well, technically after. Prequels are confusing.

In short, Deus Ex paved the way for games to become more mature, more three-dimensional and, ultimately, much more satisfying, still just about standing up to modern audiences as an absolute masterpiece of design. Considering the fact that Deus Ex not only served as the springboard for the handful of mostly excellent games that followed, as well as inspiring countless other shooters in the same vein, the debt the industry owes the seminal 2000 release is enormous.

Human Revolution has earned its place at the top of the Deus Ex heap.

Released in 2011 and set in the year 2027, Human Revolution still holds up well aesthetically and mechanically, establishing many of the key themes of the series as a whole while also giving the world its most iconic protagonist, Adam “I never asked for this” Jensen. By taking things back to near the start of the game’s chronological timeline, Human Revolution was able to establish many of the origins of the series’ major themes and features while stamping its own identity on proceedings for a whole new generation of console players.

Human Revolution is a triumphant blending of style and substance, one of the first games in the series to really make the most of the cyberpunk aesthetic to maximum effect. Dark, inky blacks contrast with shining golds and glowing oranges to give Human Revolution a distinct visual signature, immersing players in a world as beautiful and brilliant as it is bleak and brutal. A Director’s Cut from 2013 that smoothed out a few of the game’s irksome kinks, such as issues with AI and an improved lighting system, only took Human Revolution to a whole new level.

Blending what are essentially RPG mechanics with stealth and FPS elements, the third Deus Ex game could so easily have been a mess of half-baked concepts and cluttered ideas. As it turns out, it’s one of the greatest games of the seventh console generation, and thus takes the cake as the best Deus Ex game of all time.