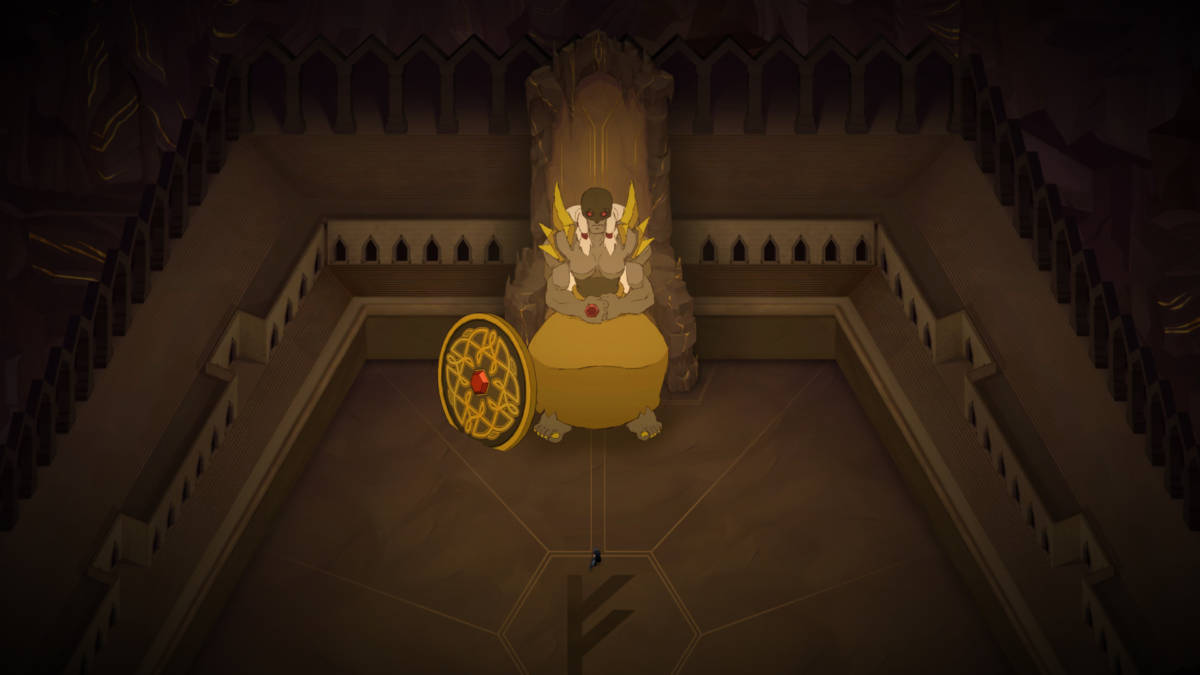 It had felt like ages since we’d had games with Norse themes. In the grand scheme of gaming pop culture icons, vikings are often shunned to make room for more zombies, ninjas, and even pirates. Thankfully, April 2018 has been The Month of the Viking, with God of War arising to prove itself the grand, big-budget masterpiece we all hoped it would be. On the much more restrained end of the spectrum, though, we have Jotun: Valhalla Edition on Nintendo Switch.

Not to give away my opinion early on or anything, but Jotun really is a lovely game. The art is hand-drawn, with frame-by-frame animation, allowing for intricate and nuanced character design alongside beautifully coloured environments. Not to be outdone, the soundtrack supports the visuals perfectly. A mix of mellow music and subtle sound cues combine seemingly effortlessly with the charming visual design to give the game an enchanting, otherworldly quality. 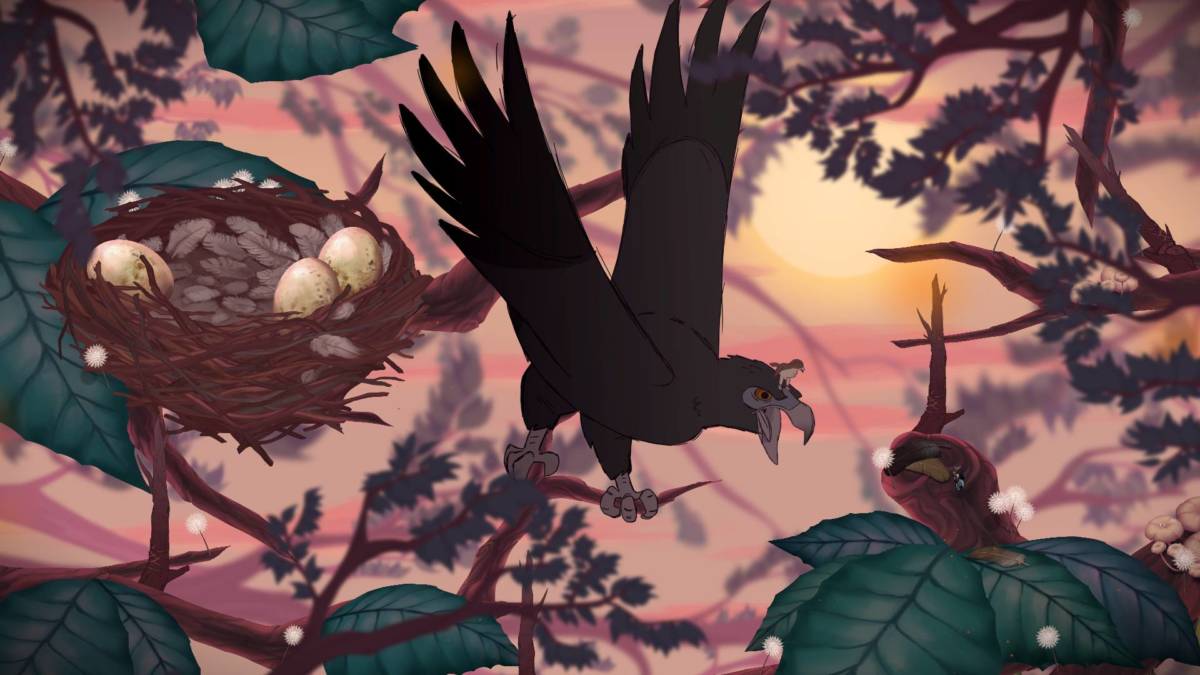 Which is a good thing, really, seeing as the story follows a young viking named Thora as she journeys through the afterlife. A warrior essentially raised from birth with a driving motivation to impress her clan-chief father, Thora suffered an inglorious death and so was banished to The Void, or Ginnungagap if you want to give your tongue a workout. In order to prove her worth, and finally enter Valhalla, Thora must explore the realms of the abyss and vanquish the titular Jotun that dwell within. The Jotun are not to be taken lightly, what with them being literal giants and everything, so Thora’s quest to impress the Gods will be filled with peril, and dodge-rolling.

The story is revealed piecemeal through snatches of narration, either from Thora herself or by someone who is presumably the overseer of the void. Whenever the player first arrives in an area, a brief bit of narration fills them in on the background context of the area, and when Thora successfully defeats one of the Jotun, she offers us another glimpse into her own backstory. It’s an impressively staggered approach to storytelling, with the narration never lasting so long as to be irritating, while also appearing often enough that the player never feels in the dark. It’s a difficult balance to achieve, but Jotun does it brilliantly. 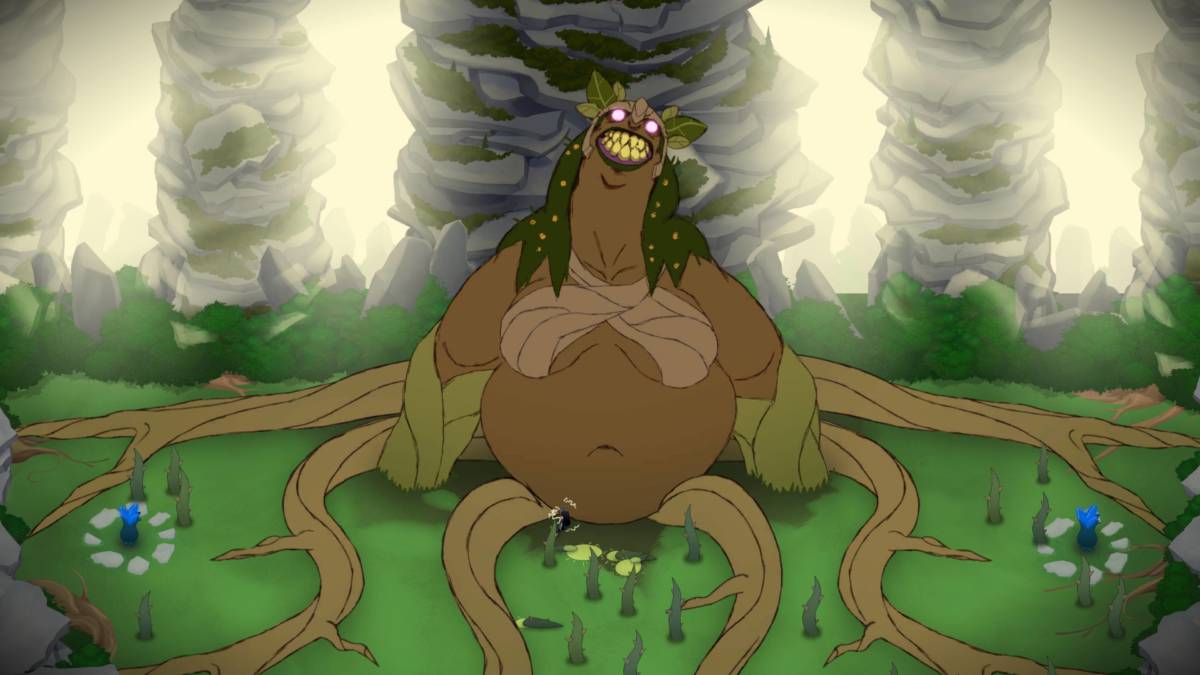 Moreover, the narration is delivered in Icelandic and is subtitled in English, which is just brilliant. It’s a piece of detail that I never would have expected going into Jotun for the first time, but it does absolute wonders for creating an immersive atmosphere, and the game would really suffer without it. Admittedly, I’m a bit of a language nerd, but I could honestly listen to Thora speak all day.

If the story, graphics, and music set up the nail, it’s up to the gameplay to Mjölnir it home. The structure is quite simple, really, with Ginnungagap acting as a sort of hub world between the levels. This hub has five different areas, each with two levels apiece, and the goal is to explore each of these levels for the ancient rune that dwells within. Once both of an area’s runes have been collected, the seal to the boss door is broken, and you’re free to declare war on that area’s Jotun in a climactic battle full of unfeasibly large swords and probably explosions. 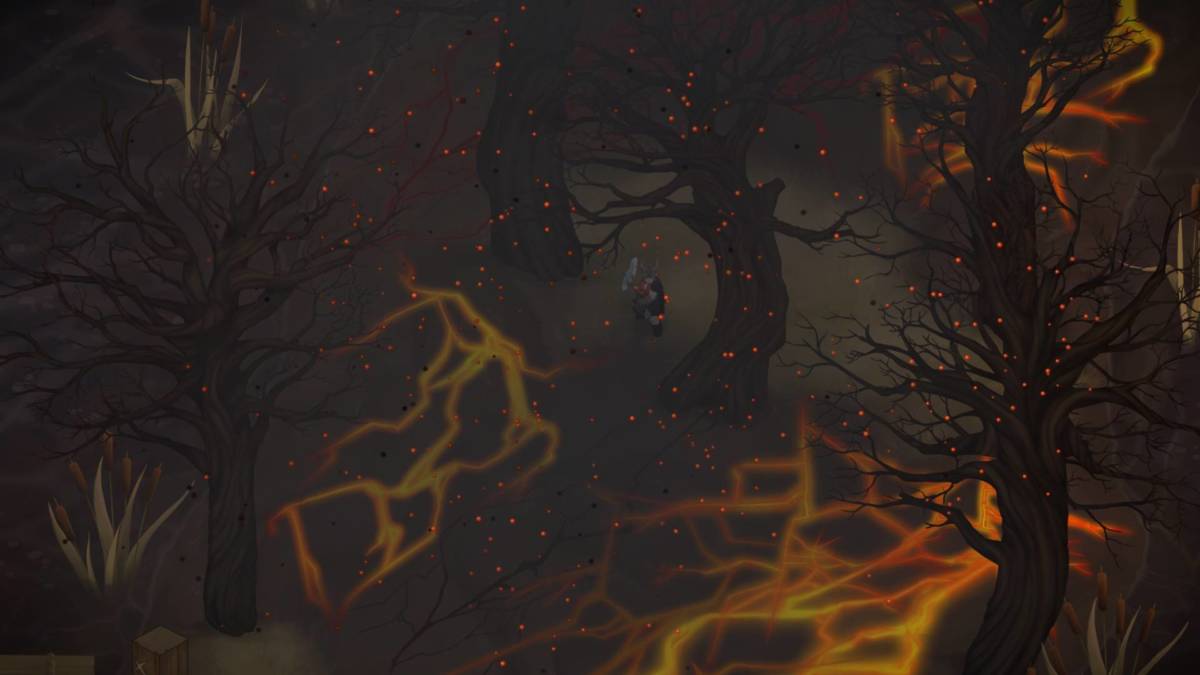 Jotun’s gameplay style is perhaps best described as having two very distinct sections: the rune-collecting levels, and the boss fights with the Jotun. The levels are very exploration focussed, with Thora having to rely on a rather minimalist map screen and her own navigation instincts to search the area for the rune, along with other secrets.

These sections are relatively slow-paced, peaceful, and contemplative, emphasising diligent exploration over combat. There are very few enemies in these stages, and Thora will often find herself alone in an environment steeped in graveyard stillness, with only the occasional crow for company. 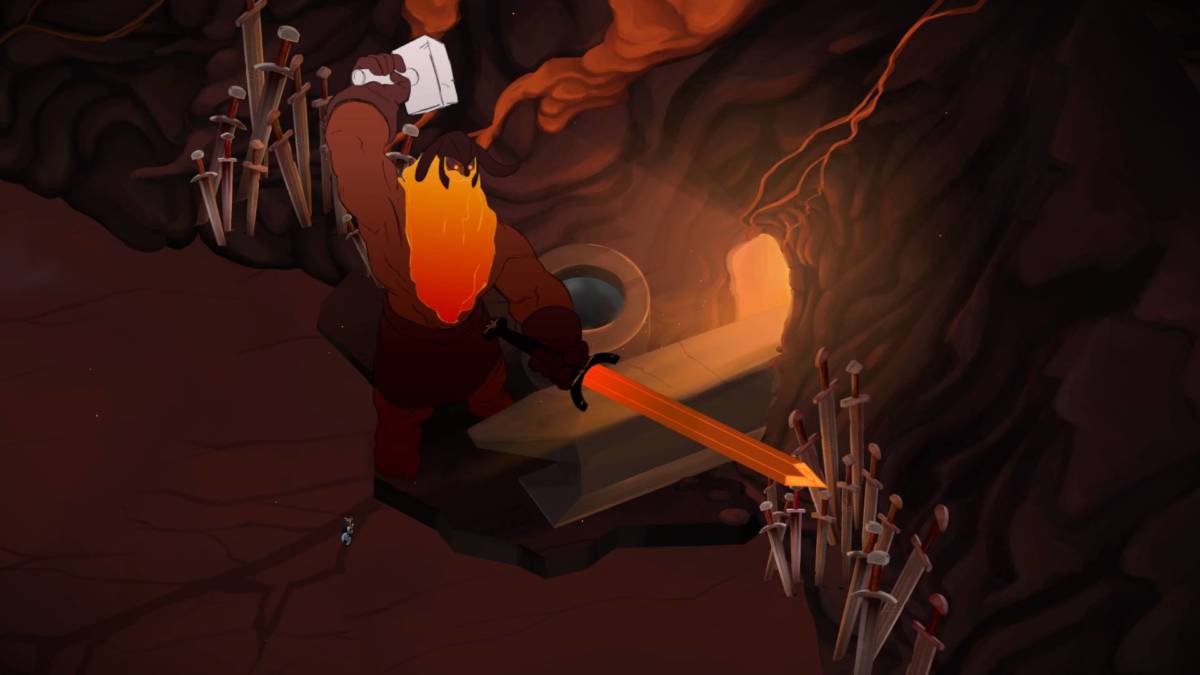 Instead of standard enemies, Thora has to contend with environmental puzzles. These puzzles are presented without fanfare, which is much more organic than a scripted introduction. The game even provides subtle clues as to how to survive. For example, the blizzards in Niflheim can be treacherous, but as you traverse the howling gales you’ll notice that there are large rocks with a buildup of ice and snow on one side. This very effectively illustrates the sense of isolation that Thora has to overcome in her quest to impress the Gods, and often shows that the land itself can be just as unforgiving as the Jotun.

There’s no denying that this approach may be a little too slowly paced for some, especially seeing as the game immediately adopts this structure from its first stage. Upon first emerging into Jotunheim, the player could be forgiven for thinking that Jotun is a rather dull game. One of the few failings of Jotun is that first impressions rather let it down, as things only really fell into place for me after I had defeated the first Jotun, and up until then I must admit I was growing rather bored. 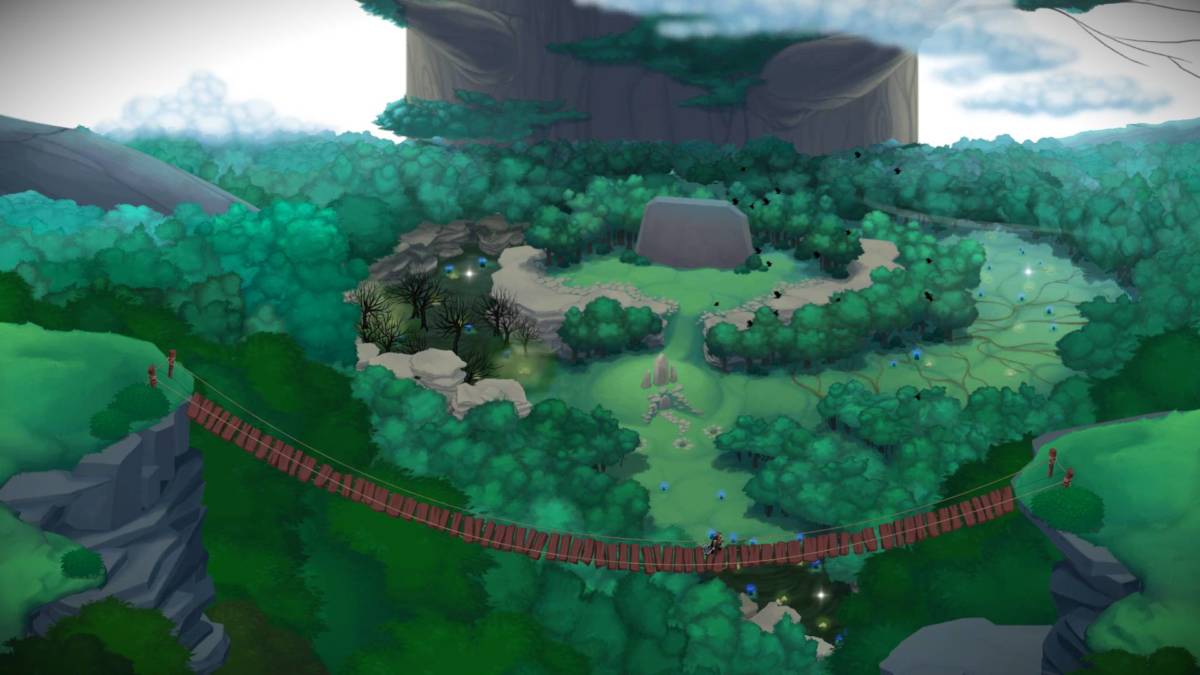 See, the boss fights are absolutely chaotic affairs, with the kind of monstrous level of difficulty that inspires true pride at overcoming it. More than that, the boss fights also offer perspective on the ordinary levels, as you realise that the game is creating a sort of ebb and flow. You can’t have crazy difficulty and huge monsters all the time, any more than you can only have quiet exploration all the time. Jotun knows this, and has endeavoured to create a balanced gameplay experience. It may take a while for each player to see it, but when they do it will be greatly appreciated.

The boss fights with the Jotun are the absolute highlight of the experience, and represent some of the most fun I’ve ever had with a game. First off, the Jotun look spectacular, each of them richly detailed and dripping in personality. Each Jotun looks distinct from one another, while still being in keeping with the overall aesthetic of their area. More’s the point, they’re actually formidable. One of the most attractive things about Jotun is that it offers a meaty challenge in the boss department, reminiscent of games like Shadow of the Colossus. They have attack patterns to memorise, openings to exploit, and more often than not a giant weapon set to flatten your viking ass. You’ll need to pull out all the stops to beat these lads, in other words, and I honestly wouldn’t have it any other way. 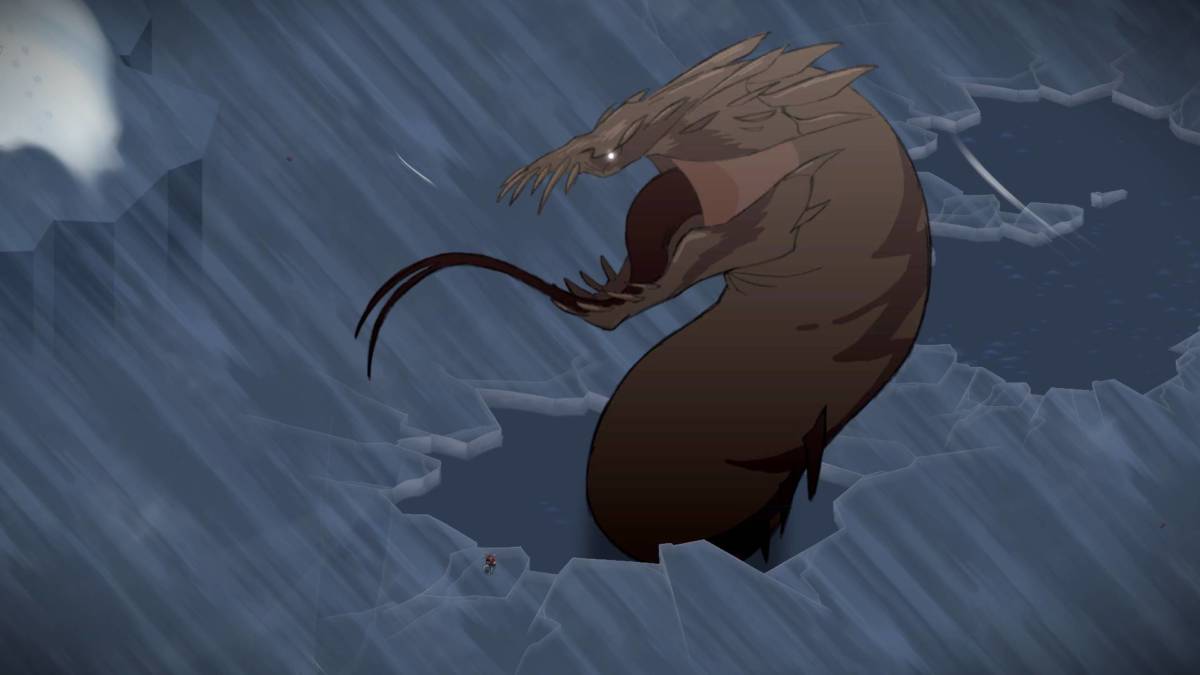 Thora isn’t defenseless, of course, having thought to bring her trusty axe along with her to the afterlife. Her attacking repertoire is a little limited, but nonetheless functional. She can do a quick attack in a one or two hit burst, as well as a more powerful charged attack. Add in her handy dodgeroll, and that’s your basic suite of moves. On top of this are the God powers. Hidden in the depths of the realms are statues built to honour the Norse Gods; Thor, Odin, Freya, Frigg, Loki, and Heimdall. I won’t spoil what each of the powers are, because discovering them is fun in itself, but they all help with combat, mobility, or healing. They’re certainly worth seeking out, and can very much aid you in your fight against the Jotun, but they are also entirely optional, so feel free to attempt some sort of crazy level zero run.

All in all, Jotun is a marvelous addition to the Switch’s game library. The setting is refreshing, with the art style and sound design combining to give the game an irrefutable charm. It’s marvelously addictive, as well, with the Jotun fights in particular sparking that ‘just one more go’ player mentality that can be so hard to come by in games. There are a few petty niggles, such as the fixed camera getting in the way of exploring from time to time, and Thora’s movement sometimes seeming frustratingly slow. These are just niggles, however, and don’t detract from the overall experience. The game certainly isn’t huge, but there is a lot to see regardless and, honestly, it’s worth it for the boss fights alone. Go forth, and enter Valhalla.

Verdict
A remarkably absorbing and lovingly crafted adventure, Jotun: Valhalla Edition is well worth your attention. It’s polished to a mirror shine, not to mention packing a mighty punch, and succeeds in pretty much everything it sets out to achieve. Microtransactions: none
9
Cultured Vultures is a pop culture website established in 2013 covering all things gaming, movies, and more. We eat your words.
All The News On The Biggest Games