Ones to Watch: Paperhaus 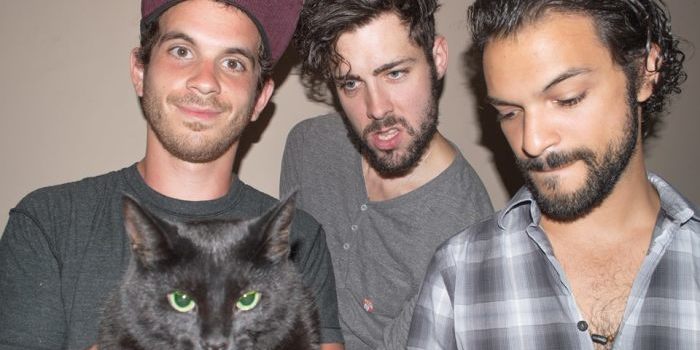 For regular readers of our PULSE new music feature, you might recall PULSE#6 in which I rambled on about number that I like. You may also recall then, that I rambled on about a number of awesome bands you needed to get into your life. Paperaus were one such band.

Paperhaus, hailing from Washington DC, rustle up a great blend of intricate indie with an eclectic array of influences that mix together to create their unique sound. Aside from that, they’re DIY through and through – not just in themselves but in helping to get the DC music scene thriving as such. Since that feature I managed to get a hold of Alex from the band for a quick Q&A. Enjoy.

Firstly, how’s things? And who’s offering up the A’s to my Q’s?

Things are crazy busy! This is Alex Tebeleff from Paperhaus. I not only play in Paperhaus, but I book shows all over the city in DC with DCDIT. We just hosted 3 crazy packed shows in 4 days. So I guess you could say I’m a bit exhausted. Between the shows I book and my own band, you can imagine I don’t have a whole ton of free time these days.

We recently included you in an edition of Pulse, but how would you describe what Paperhaus is all about?

Paperhaus started with Eduardo Rivera and I back when we were in middle school, and we’ve been lucky to have worked with a really creative cast of musicians in our rhythm section over the years. Recently in 2014 we added Danny Bentley on drums and Matt Dowling on bass. It’s definitely the best line-up we’ve ever had.

We try to make music in as unconscious and organic a way as possible. We took that approach to its extreme with our first album coming out in Feb. 2015, writing the songs through rather intense collective improvisation sessions and slowly letting the songs take on a life of their own and turn into completed compositions over however long the song needed to develop. Some songs took two hours, some took two years! We even wrote some of the material live on stage during a long national tour we did in the spring of 2013. We find that this approach to creativity allows for the most open and free expression. We want to make music that will really give something special and fresh to people. We want to make music that makes people think and really feel something.

What would be some of your biggest musical influences, or otherwise?

We really listen to an extremely wide range of music. While making our upcoming album, we were listening to a lot of CAN, Parliament, Fela Kuti, and King Crimson for rhythmic inspiration, and I can hear how Scott Walker, Lower Dens, and Here We Go Magic really influenced us as well. When “Misery,” the song that really kicked off the process of writing for the album during a particularly, shall we say influenced, session, Radiohead’s King Of Limbs, James Blake, Howlin’ Wolf, and Fugazi were being played and listened to rather intensely, and I can still hear when I listen to it how each of them subconsciously influenced that song. Fugazi definitely influenced the lyrics, Howlin’ Wolf brought out the blues in us and certainly in that main riff, James Blake made us think about space and being tasteful, and that Radiohead album in particular made us think about timbre, texture, and sonic color.

The album overall sounds drastically different from our last record release, an EP called “Lo Hi Lo,” and the difference in the music we were listening to definitely had an effect on that. We wanted to make music that sounds like us, without being fearful of our influences showing, so hopefully you can hear these bands when you listen to the music, but it still sounds distinctly like Paperhaus. Really, song to song, the influences and styles on the album change pretty drastically, but we’ve never consciously tried to fit any influence into any aspect of a song we’ve created.

In that feature we briefly touched upon ‘The Paperhaus’, you’re home/practice space/gig venue. Care to tell our readers a little more about it?

We started The Paperhaus as a way to reach out to our community and to help touring bands find shows in DC. We wanted a way to hopefully help bring more awareness to the people really dedicating their lives to a creative pursuit in a city that really love to suppress their emotions and actual feelings. I think art is needed in DC more than almost anywhere else, which is probably why once people really started to realize that people wanted it and actually gave a shit over the past couple years, the DC scene has exploded. There are more great bands than I’ve seen in many years in DC, and now there are literally dozens of houses hosting shows in their living rooms. The spaces and bands come and go, but it seems like there is a really sustainable thing happening in the music scene long term in DC right now. It’s a really exciting time to be a musician in DC.

It’s amazing to me that The Paperhaus has lasted as long as it has! We’ve had hundreds of bands play at our house, and I’ve seen many of the best shows of my life in my own living room. With very few exceptions, people are always really respectful and reasonable, so we just keep doing it. Being on the road we meet so many great bands we want to share with our community back home in DC! Hopefully it helps inspire more DC bands to tour as well. It’s a great opportunity to help connect bands in DC with the rest of the country, and vice versa. We don’t want our house to just be about DC, we want to support vibrant music wherever it’s being made. I remember a few years ago when bands I really wanted to see just kept passing over DC on tour. Because of the house show scene, that doesn’t happen anymore!

Your debut full-length album is set for release in February, 2015. How are things looking in regards to that? Excited?

Well if you couldn’t tell by my previous answers, damn right I’m excited about this album! It took an incredible amount of time and effort over multiple years of writing, improvising, arranging, touring, and learning how to live with people in the most extreme ways. The four musicians on this album all lived together and toured together for months on end during the creative process, and we really pushed our minds and bodies to their limit. Our drummer on the album, Brandon Moses, and our bassist on the album, John Di Lascio, are both still like brothers to Eduardo and I. I don’t think you can go through an experience like that without either loving or hating the other people. Luckily it’s all love. Both are currently pursuing amazing projects on their own, Brandon with Laughing Man, and Johnny with Stronger Sex.

How about on the live front, gigging a lot? Any big tour plans?

We’ve played hundreds of shows over the past few years. We haven’t gone hard by our standards in 2014, in order to get ready for the album release and save up the cash and mental energy, but once it comes out in 2015 I’m sure we’ll make it across the country again. We really love to tour as you can probably tell!

You’re a key component of the DC DIY scene, are there any other bands from that scene that we should hurry up and get listening to too?

Apart from music, and the band, what are some of your other big passions in life that drive you?

I really try to take in art in as many forms as possible, I actually find I get more inspired to write songs by other mediums like painting and poetry especially. I’ve been reading Ezra Pound almost every day for weeks now and I think his ideas on the human experience, his use of classical historical myths, and his meta-ideas on the creation of art itself and what it means to truly be an artist in the world are really profound. Art is a way to force yourself to be challenged, to be better. If you are open to it, it can shake your opinions, values, habits; I feel making art and having it in my life as an appreciator as much possible is essential to my personal growth as person. It’s why I feel the need to pursue music so seriously, songwriting just happens to be the medium of art I connect with most fully.

I also really love food. I find food to be one of the most direct sensual experiences a person can have, I love the immediacy of eating something that is particularly delicious or interesting. I’m a pretty picky eater I guess. I just feel like it’s the same as anything else; if you are going to do something, why not do it well? Otherwise might as well have not done it at all, it’s just a waste of your time and probably somebody else’s time too.

If you had a pet vulture, that happened to be particularly cultured, what would you call it?