This month is the start of a lot of new runs for Marvel. 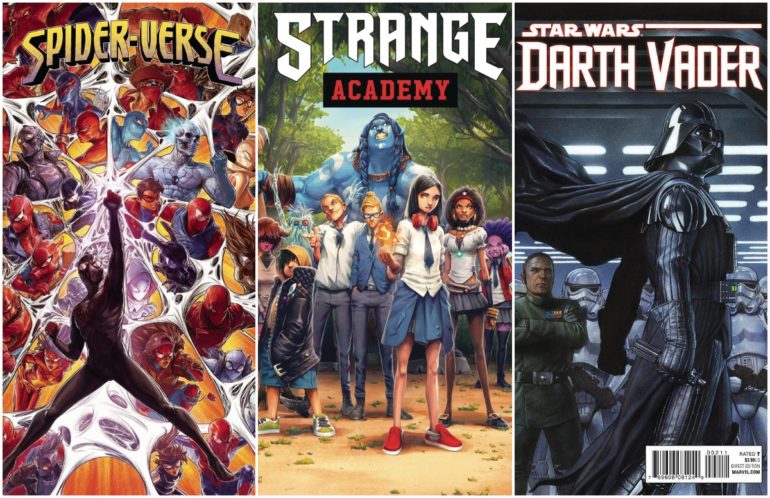 There’s a lot of good content coming up for Marvel Comics. Besides one entry on this list, it’ll be the beginning of a lot of promising comic runs, ranging from lovely tributes, ambitious new series, and some of the most talented creators working together. So here at Cultured Vultures, we’re going to give you the top five Marvel Comics issues that you should pick up for March 2020.

Whenever we get a crossover with all the different Spider-Mans that Marvel has to offer, you know you’ll be in for a treat. And what a treat Spider-Verse has been with its loving tribute to Spider-Man, and fun approach to the series. It’ll come to an end with issue 6 that’ll have Miles Morales, Spider-Man Noir, Spider-Ma’am, and others trying to fix the Web of Life and Destiny. Judging from the cover (which features dozens and dozens of Spider-Men together), it’s going to be a fun finale. If you’re a fan of Into the Spider-Verse and haven’t read this limited series, do yourself a favor and get started.

This new series will center around Dr. Strange who opens up an academy for young magic users. Mystic students from Earth, Asgard, the Dark Dimension, and beyond will come to learn from Doctor Strange, Brother Voodoo, The Ancient One, Scarlet Witch, Magik, Hellstrom. They must prepare for a grave threat that’ll threaten the entire Marvel universe. Everything about this series just screams out fun. Yes, there are some obvious parallels to Harry Potter and other young adult fiction, but it’ll be fascinating to see what Young and Ramos does with them. Combine that with some big names in the mix like Scarlet Witch, and this series might deliver on some serious promise.

When the miniseries, Marvels, launched in 1994, it introduced the world to the legendary comic figure, Alex Ross with his unique and stunning art style. Ross’s original vision of Marvels will be told with the series, Marvel. It’ll be an anthology of stories told by creators that haven’t worked with the characters. There are so many boundless possibilities with the mix and match of different creators working on characters. For this issue, the Avengers, Spider-Man, and Nightmare will get the focus. Just from the preview, each story looks to have its own distinct, beautiful style, especially for the Avengers story done by Steve Rude, which has the retro 60s’ art. Any Marvel fan should check out this incredible anthology that Alex Ross has created.

Set moments after the “No, I Am Your Father” revolution, Darth Vader is for the first time in a while uncertain of his path. He sets out on a journey of revenge for those who hid him from Luke Skywalker. This run is off to a great start with some incredible Vader moments and action with Issue 1. It’s fascinating to look at Vader’s perspective after the Empire Strikes Back. To have someone menacing like Vader being vengeful, who’s usually reserved with his power, is going to be fun to read. Issue 2 is highly anticipated, especially after that bombshell ending from the first issue. Without diving too far into spoilers, there are so many smart callbacks to the prequels. Any fan of Darth Vader needs to start reading this promising run.

While Gwen Stacy has always been a well-known character, the moment that readers remember her by is her famous death. Now there’s been a resurgence of her with Emma Stone’s performance in The Amazing Spider-Man series, Spider-Gwen, and more. Now Gwen Stacy will have the spotlight in her own limited-series that focuses on her time before she met Peter Parker. For something that people assumed was unnecessary, it’s turning into a lovely tribute to Gwen. The series is like Marvel’s answer to Nancy Drew as she tries to solve who’s discrediting her father. This adds a new dimension to her character as the mystery itself is compelling. If you’re not a fan of Gwen Stacy before this upcoming issue, you will be going forward