New Amsterdam is an advocate and voice for those people who don’t always have the platform to have their voices heard. 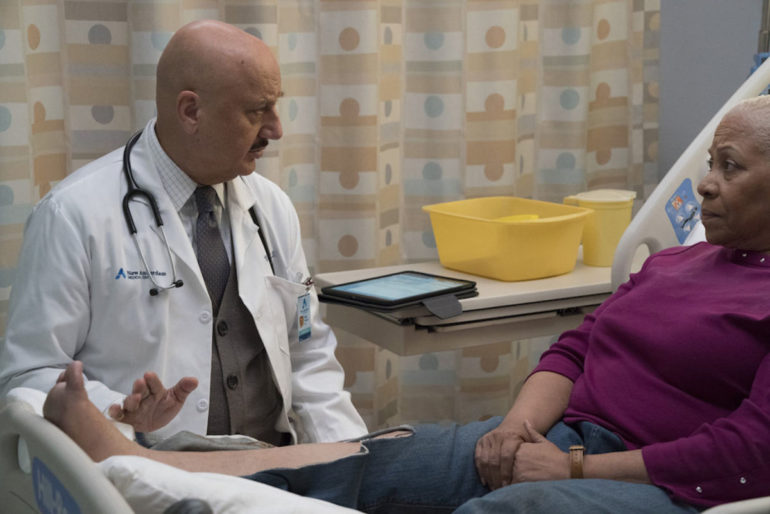 This week’s episode of New Amsterdam has something simply wonderful about it – a single extended tracking shot. Who doesn’t love those? The scene follows Dr. Bloom around the emergency department as she prepares for a day that seems like it could be rather slow. But, as we come to see, things take a very drastic and dramatic turn when a van full of passengers is brought in.

More often than not, we don’t talk about the cinematic aspects of a television show, unless we’re talking about something along the lines of Game of Thrones. But there is something spectacular about the way “Righteous Right Hand” was filmed. From the single-shot to the directorial aspects, there is a lot to take away from how the episode came together. When the episode begins, Dr. Bloom walks into a seemingly quiet emergency department which within moments turns into a crazy frenzy. But what truly encapsulates this shift is the camera work, specifically the one-shot technique. It was as if the audience was experiencing her day with her, and with such close camera work, it really brought you into the emotion of it all.

This technique is used throughout the episode, but mostly during Dr. Bloom’s scenes for the dramatic effect of the emergency department moments. Furthermore, her scenes and the scenes that follow are directed in a manner that really hone in on the moment. Each scene builds on the other from empty emergency department room, to the van full of crowded passengers, to the story of the disabled pregnant woman, to the big reveal at the end. It’s TV magic!

But it’s not just the cinematography that makes this episode stand out within this season. This episode focuses on a van full of passengers that get into an accident. But how and why they end up there is what really makes for one hell of a story. It’s been mentioned many times before that New Amsterdam loves to take an emotional approach with their stories. The series is also an advocate and voice for those populations that don’t always have the platform to have their voices heard. In “Righteous Right Hand”, a van full of passengers is rushed into the emergency department. It turns out that this accident happened on purpose as one of the women was hoping to use the liability insurance to help treat all her friends’ untreated conditions.

While I feel that the execution of this story could have been handled in a different manner, there is a lot to be said about where it led to. Medical dramas tend to tiptoe around taboo topics, unless we’re talking about The Resident and sometimes Grey’s Anatomy. For example, The Resident often focuses on patient stories involving insurance and financial issues. In one episode of The Resident, the characters pulled off a secret surgery in order to help out a patient. In Grey’s Anatomy, Meredith Grey uses her daughter’s insurance to pay for a patient’s surgery. This particular story in New Amsterdam is also a reminder of the woes of insurance and how difficult it is to get care sometimes. It’s quite jarring and devastating, and it’s commendable that New Amsterdam made a story out of it.

New Amsterdam has become known for its inclusion and diversity. Just take a look at this episode alone. With major and minor characters, you’ll see people of all races, colors, sexual preferences, and religions, and it’s so seamless in every scene. Just in this episode alone, you see a woman of color in a hijab, an African American cardiologist, and a disabled pregnant woman. This is something that truly stands out in New Amsterdam and it’s a concept other shows haven’t quite grasped yet. New Amsterdam takes inclusion and diversity to the next level, and in this episode alone, you can get a wonderful example of that, especially in the emergency department scenes.

“Righteous Right Hand” also has a character arc involving a young pregnant woman with Down’s Syndrome. Her story involves abortion, religion, and her condition, and it’s something I can’t recall seeing much of in other medical dramas, at least not in the way this character’s story plays out. The young woman, Chante, is very much aware of all the circumstances of her situation, and she still wants to go ahead with the pregnancy. This is a point of conflict for her guardian who doesn’t want her to have the baby. New Amsterdam manages to play out this story very beautifully as these characters battle their religious beliefs and Chante’s state of mind to come to a solution. It could have gone horribly wrong, but the show pulls it off in a beautiful manner that keeps you engaged from start to finish.

Let’s talk a bit about Iggy’s storyline in “Righteous Right Hand”. He’s eager to adopt another child but he’s doing the whole process without his husband. It’s not entirely clear where this particular plot is going, but it’s not something I’m completely invested in. I don’t see the end goal here, and it may not pay off in the end. Are we just trying to get to a point where he and his husband have issues? And how does that really affect the overall story? I think we could do away with this particular story tangent.

“Righteous Right Hand” ends on a very jarring and frightening note which speaks a lot to Max’s state of mind. As we’ve seen, since losing his wife, he’s been struggling to raise Luna on his own. But what makes it worse is that he often have conversations with his dead wife. Whether that’s a result of the trauma of losing her or a side effect of his illness or treatment is unclear. But he hasn’t been able to process it as he should, and that’s proving to be problematic.

I’m glad that the series isn’t forcing Max’s progress in the aftermath of his wife’s death. It’s a slow, delicate journey and while Max may operating at full capacity at work, the same cannot be said about how he is at home. Throughout the episode, Dr. Sharpe is insisting that Max let her help in some way, and he finally agrees to let her. She decides to send a company over to clean his place, but he quickly refuses and shuts the door on them. Why? Well, the final few moments of the episode reveals that Georgia’s bloodstain is still hidden under the rug. Max isn’t ready to say goodbye and the fact he wouldn’t let the cleaning team in makes total and complete sense. The way the series has shown Max trying to grieve the loss of his wife has been devastating, and this moment really brings the whole thing full circle.

New Amsterdam knows how to do this type of story well, and while it certainly it has its setbacks and plot holes, they always get their point across. It’s just the manner in which the show is written, and it’s something we have come to count on with the series with each and every episode. Apart from Iggy’s story of adopting without talking to his husband storyline, I’m invested in where we are headed this season, particularly in Max’s grieving process. 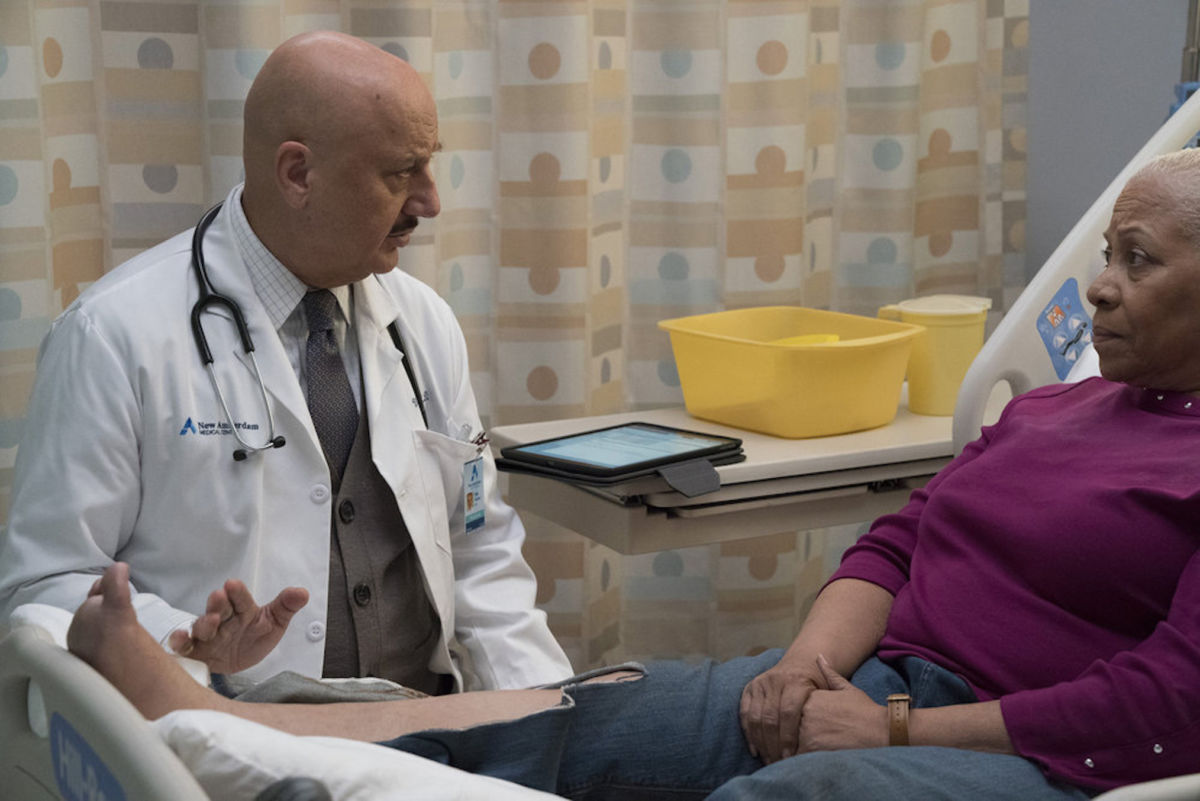 Verdict
This episode shifts its focus on Dr. Bloom’s progress in the workplace using a complicated and emotional storyline involving patients using inadequate insurance. “Righteous Right Hand” is gripping, emotional, and a beautifully directed episode filled with stellar cinematography we haven’t seen from New Amsterdam before.
8
Cultured Vultures is a pop culture website established in 2013 covering all things gaming, movies, and more. We eat your words.
All The News On Your Favourite Games