So - this was actually, genuinely meant to be an adaptation of Resident Evil, then? 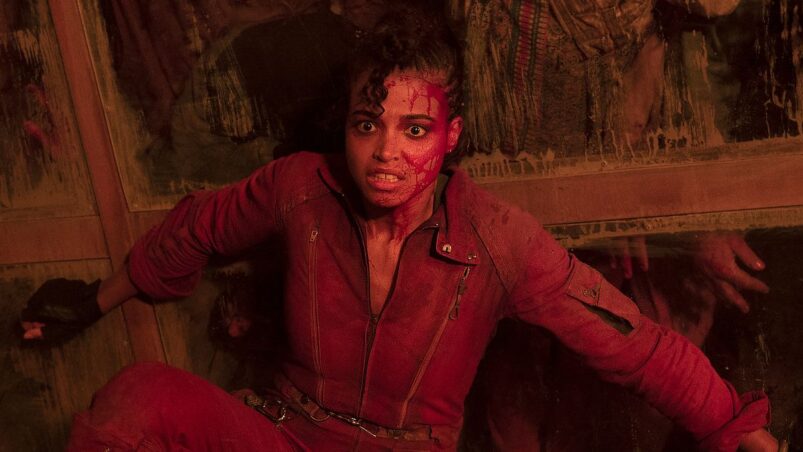 Netflix’s Resident Evil has already been flamed to a crisp by the fans and general audiences. Professional critics have been a bit more positive, but that only brings their opinion up to lukewarm. It’s easy to see why: the show’s confusing split chronology adds nothing but more runtime, the teen main characters are as insufferable as teen main characters tend to be, and, perhaps the greatest sin to a certain sort of fan, it’s not a straight adaptation of the games.

Very often when talking about screen adaptations, there’s the terrible risk of banging on about deviations from the source material. Making a faithful adaptation has never simply been about including every little detail (evergreen example: Tom Bombadil), it’s the indefinable process of actually capturing the spirit of the original.

So when Netflix’s Resident Evil presents dialogue that sounds awful, I have to call that a positive. The games on which it’s based are famous for desperately, uniquely clunky lines. Here it leans more towards end-of-the-pier groaners about pop culture, which aren’t quite in the vein of the games’ clearly at-least-once-translated writing, but sound immediately ridiculous in much the same way.

Notably, Netflix’s Resident Evil rather ostentatiously drops in the original game’s famous ‘master of unlocking’ line. This is an absolute classic not simply of bad game dialogue, but of game dialogue period. The bad delivery, the inexplicable phrasing, the weird faux-levity in an outwardly terrifying situation – it’s Golden Raspberry material, the very essence of ‘so bad it’s good’.

But to have the adaptation include this direct reference can’t help but feel lacking, and perhaps this is because they’ve changed so much else. I know, I said I wouldn’t bang on about deviations from the source material, but these aren’t so much deviations as changing direction from square one.

The Resident Evil games billed themselves as ‘survival horror’. Resources were scarce and there were a bunch of zombies coming at you. If they get you, it wasn’t just a coy ‘game over’, it was a bloodily rendered ‘YOU ARE DEAD’. Granted this uber-serious tone didn’t always gel with the ridiculous dialogue, but, to repeat myself, this is very much the heart of the franchise.

Netflix’s Resident Evil does, at least, have a go at putting its protagonists in genuine peril. But as they’re abruptly saved in just the nick of the time again and again, the plot bending over backwards to keep them safe (while casually killing off other, more interesting characters) it doesn’t simply wear away the idea they’re in any sort of danger – it firmly establishes that they were never in danger.

So when it includes some of the games’ profoundly silly bits — like playing ‘Moonlight Sonata’ on a certain piano to open up a secret door, or including a character modelled on Resi 4’s Dr Salvador — rather than a knowing wink to the fanbase, it seems more like bits of the original canon bolted onto the sites of what, with these serial numbers filed off, could easily have been a completely unrelated show.

This is entering fairly cynical territory, but some of these divergences from the source material may have been done for tactical reasons. Casting Lance Reddick as a character previously shown as nothing other than white will produce a backlash from racists, who can then be held up as emblematic of all the negative criticism.

Meanwhile, other parts of Netflix’s Resident Evil may also be tactical – but in terms of taking the path of least resistance. The mystifying split timeline has been a staple of a certain sort of prestige drama ever since Westworld came on the scene (and Westworld itself started seeing diminishing returns from this very quickly). We’re introduced to the post-apocalyptic world in an eerily deserted London, which might have been impressively creepy if 28 Days Later hadn’t done exactly that, better, twenty years ago.

Elsewhere, the surgically sterile ‘New Raccoon City’, a company town in South Africa,  seems a lot more like an unused set from Black Mirror with its identikit ultra-modern white houses. Would Netflix recycle its own goods in this way? It would certainly explain the section where the Wesker kids have to creep around the house without letting the thermostat see them.

This in mind, throwing in little bits and pieces from Resident Evil starts to make more sense, because that, seemingly, was the creative process: to pick-and-mix bits of other successful properties, heedless of how well they go together. I mean, why not? If they draw on Resident Evil and Westworld, well, surely both their existing audiences will flock to this rhubarb-and-custard smorgasbord.

This is the traditional problem with stuff like TVTropes. It’s interesting to have a work broken down to individual components, but the fact is, while fiction is made up of tropes, it’s also more (or, as it is here, less) than simply the sum of its parts. If you really want to boil things down to the purely mechanical, then Jurassic Park is nothing more than the story of a package holiday going badly wrong.

Like in comedy, it’s the way you tell them. And Netflix’s Resident Evil is told in the way you might expect from someone who played the games, once, fifteen years ago, and is now getting their memories of them muddled up with The Evil Dead.