Ranking the Evil Dead Movies From Worst To Best

Or from least best to best bestest — they are *all* great. 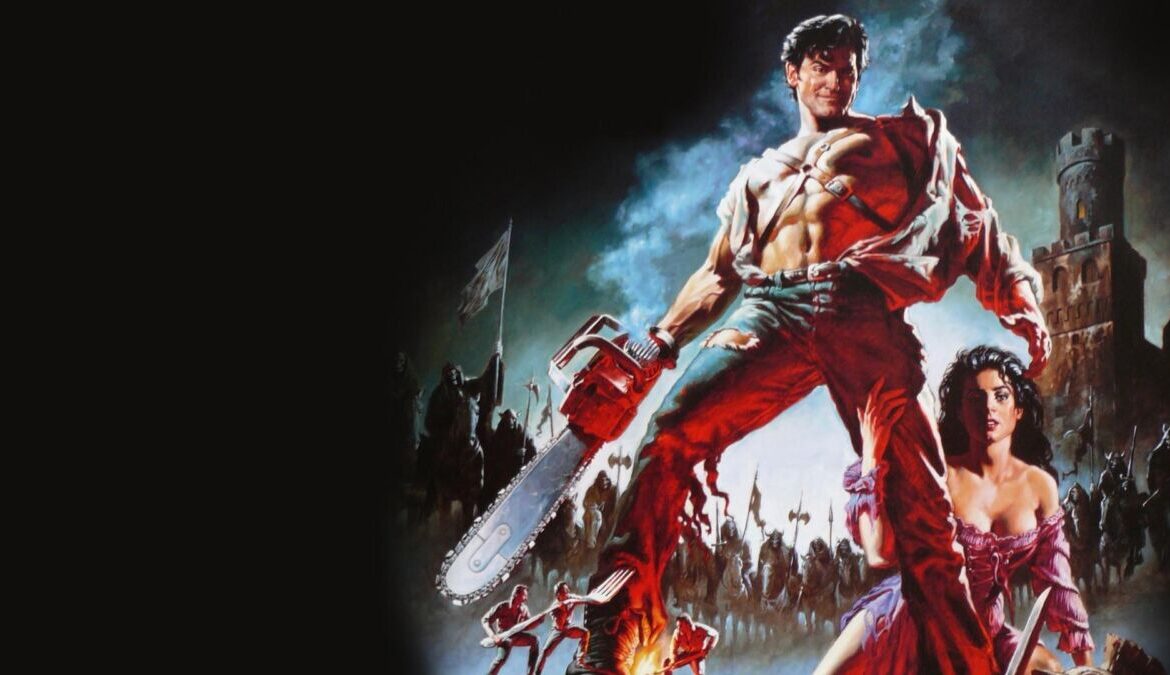 The best part about an Evil Dead marathon is that you’re going to have a lot of fun from start to finish. That’s because all four movies in the franchise, and this also extends to the exceptional, delightfully nasty, and pretty much freaking perfect Ash vs. Evil Dead, are quite good. Beginning with the groundbreaking 1981 classic The Evil Dead, we’re firmly in a film series that has surprised on two levels.

One, the fact that this one blood-and-guts staple of horror spawned sequels, a TV show, a series of comic books, video games, and an impending reboot/remake. Diminishing returns are inevitable with almost every franchise, but Evil Dead as a whole has largely done well for itself. The movies are beloved by the fans and the TV show is one of the best in the genre of the 2010s. Unlike almost every other franchise you can think of, especially in the specific realm of horror, Evil Dead has yet to experience a serious misstep.

So, the challenge then is ranking four very good movies against one another. Without a weak entry in the bunch, these films are running a very tight race for the best of the bunch. Keep that in mind, as we start comparing these films to one another. If everything’s groovy, let’s rank some Evil Dead movies from worst to best.

It all began with a short film. Jumping from the success of a true DIY horror film effort, aspiring writer/director Sam Raimi, brother Ted Raimi, future horror legend Bruce Campbell, and a small crew of fiercely creative youngsters were able to get enough momentum together to see the conception and completion of a full-length Evil Dead project. The result is a messy, sometimes awkward film. The Evil Dead is also one of the best horror movies of the period.

The story is simple enough: A bunch of fun-loving kids hit a cabin in the woods for an exciting weekend before getting a descent into hell. Given the year in which this film was released, there is an argument to be made that The Evil Dead was one of the cornerstones of establishing the 80s as one of the best decades the horror genre has ever seen.

One of the hallmarks of the Evil Dead series is the combination of humor with an extreme degree of cartoon violence. The Evil Dead is perhaps the meanest entry on this list with regards to violence, and its sense of humor is apparent, but not nearly as refined as it would become later. These qualities keep it just shy of being as satisfying as Evil Dead 2 or Army of Darkness. Some prefer the viciousness of this first film, which is also easy to understand.

The characters here, including young Ashley “Ash” Williams (Bruce Campbell, showing off the charm that would help this character in future sequels) are not terribly interesting. However, an immensely talented, passionate cast seems to be having way too much fun for anyone to care about plot or character. This is a bloodbath with a heightened sense of low-budget ambition and style. The makeup and camera work are just two ways The Evil Dead captivates then and now. The special effects here aren’t going to blow your mind, but you’re likely to be impressed with how much Raimi and company accomplished with so little.

It’s been over 40 years since The Evil Dead shocked audiences and made a few careers, but it hasn’t lost much of that power to shock and awe, if any.

The 2013 Evil Dead remake/reboot is a rare breed: it’s one of the few remakes that is just as good as the original. Focusing itself as a remake of the original Evil Dead means we aren’t getting the same sort of sense of humor that Raimi and company brought to the proceedings. We are, however, getting a movie clearly made by serious horror fans and admirers of what Raimi’s film accomplished in 1981. Evil Dead draws much of its heart and story from that film in particular, and the results are a movie that quite frankly is at least superior to its inspiration.

This time, the story concerns a young drug addict (an exceptional Jane Levy) being taken to a cabin in the woods but her well-meaning-but-not-super-bright friends. Evil Dead movies have always been benefitted from good actors playing fun character. This one is no different, with particularly strong performances by Shiloh Fernandez and Elizabeth Blackmore.

The basic premise of Evil Dead is a good example of the film operating within a backdrop familiar to fans, but also finding ways to genuinely freshen up the story. This never stops being a movie in this tradition of this series, particularly as the carnage ramps up when those pesky demons get in the way of a good old-fashioned dry-out. However, time and time again, Evil Dead finds a variety of ways to create its own monster.

Evil Dead has powerful tension and an unshakable atmosphere of absolute destruction and chaos. The visuals build upon the desire of its forefathers to be wild, violent, and downright mean spirited entertainment. The Evil Dead in 1981 combined those qualities in such an inventive way, the film’s sum became an expression of deranged joy. It’s astonishing the degree to which Evil Dead built upon this concept in 2013.

If, for some reason, you wind up starting with this film first, you’re still starting off on a fantastic note. Comparing and contrasting the first film can also be a lot of fun. If you don’t care about literally any of that, you’re still watching one of the best Evil Dead movies.

Despite three of the four films on this list being written or co-written (with Ivan Raimi and Scott Spiegel) and directed by Sam Raimi, it sometimes feels a little odd to compare Army of Darkness to anything else on this list.

Despite the fact that these movies share a lot in the way of cast, crew, references, themes, and more, each movie represents something quite unique unto itself. The Evil Dead is mostly straight horror. Evil Dead 2 swings a little more into comedy. The 2013 remake is an interesting hybrid of all of these.

Army of Darkness is the most comedic of the bunch. It still retains a foundation of horror and wild creature designs/makeup, but many tend to think of Army of Darkness as a comedy first and a horror film second.

And you know what? That’s pretty spectacular.

Army of Darkness deserves a place among the best comedy-horror blends of all time. Bruce Campbell’s terminally unlucky Ash becomes a fully formed character and antihero here. Slanting the story firmly into comic book territory (which obviously worked out fine for Sam), Campbell gives an exceptional and deeply funny performance, carrying a movie that only occasionally feels like a loose collection of vignettes and not an actual movie.

However, Army of Darkness is too gleeful in every facet of its construction and execution to really have any sort of problem with its good-natured chaos.

Beyond Campbell’s performance, in both acting and fight/comedy choreography, Army of Darkness also enjoys memorable performances by Embeth Davidtz, Richard Grove, and Marcus Gilbert. The human performances remain as much fun as anything else in this whirlwind of physical comedy, appealing practical effects, and a memorable script of one-liners and dialog exchanges.

Army of Darkness may not be quite the horror-centric experience you’re looking for, but that doesn’t stop Army of Darkness from achieving greatness. It would’ve been fun to see a 90s Ash in one more of these, but we’d have to wait a couple of decades for Ash vs. Evil Dead.

Comedy and decadent violence are arguably the two most important things about the Evil Dead franchise. While every entry up to this point has brought something incredible to at least one of those qualities, Evil Dead 2: Dead by Dawn combines them in the most appealingly gruesome package.

There is a pleasure here in just watching everyone involved try to come up with bizarre set pieces, seemingly random splashes of humor, and plot twists built around the desire to pull off some of the most dangerous and absurd ideas ever filmed. Evil Dead 2 is rarely scary, but it does have a mania that becomes frightening, as well as a brutal desire to put its characters through an aggressive, mocking collective of evil.

With a noticeably bigger budget than its predecessor, but still a good deal less than even a mid-budget Hollywood movie of the day, Evil Dead 2 was determined to be more intense in every possible way. The film basically operates as a remake of the first movie, but with a considerably different approach to its plot, as well as a few different characters. Some also contend the movie is in fact an actual sequel to the first. The truth is probably somewhere in between, if Bruce Campbell is to be believed.

None of this really matters when it comes to pure enjoyment. Like the other Evil Dead movies, you don’t particularly need to see the others to have a good time with this. A group of people converge upon a cabin in the woods for a variety of reasons which become  irrelevant, as a malevolent force soon traps them with intent to destroy them and swallow their souls.

Unlike the previous film, which never really lets up on its victims, this group makes more of an effort to survive the madness that has descended upon them. This is the film in which Ash transitions to becoming a hero, although his particular brand of heroism proves to be quite in step with everything else going on here.

Evil Dead 2 boasts another stunning performance from Campbell, but the film is a classic for so many other reasons. Supporting cast members like Sarah Berry and Dan Hicks, the sheer volume of talent in the makeup department, and beautifully dark sense of humor make this film one of the most unique and impressive of all time, as well as the best Evil Dead movie overall.

READ NEXT: Ranking the Mad Max Movies from Worst to Best