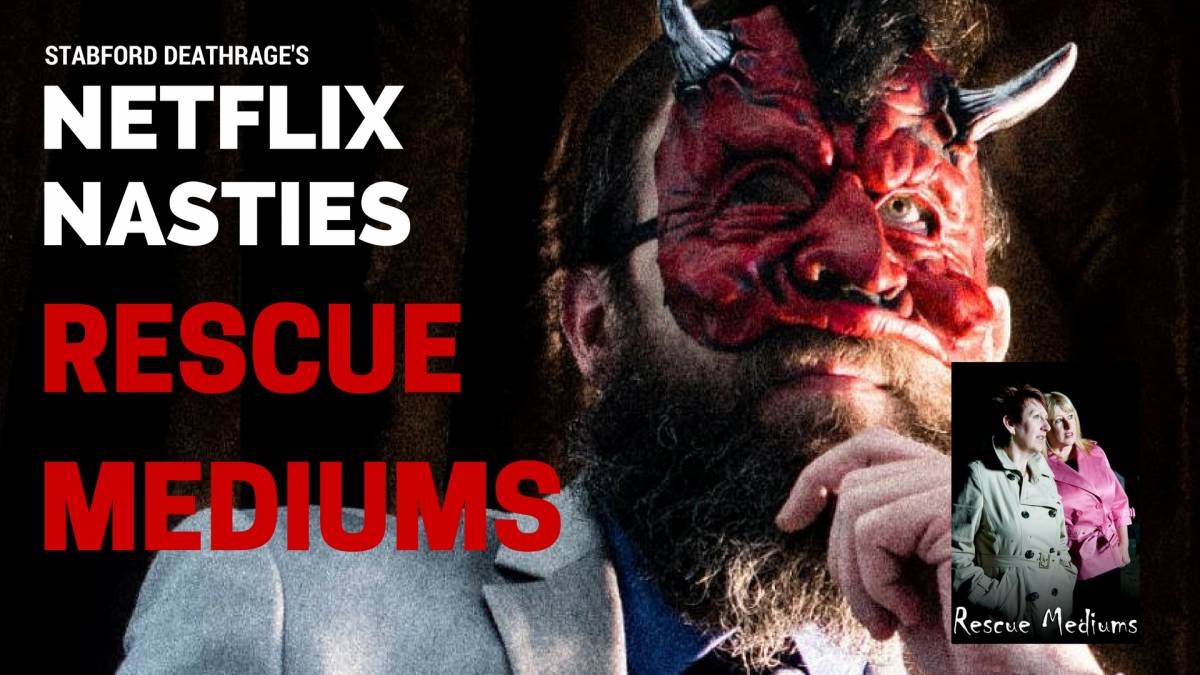 A paranormal TV show starring two psychics who investigate and clear supposedly haunted houses, appear to make up stories about dead people, and absolutely nothing even slightly paranormal happens, Rescue Mediums features an affected voiceover narration with saturnine and puzzling monologues about ‘gusts of psychic winds’, snippets of recreated ghostly phenomena shot in that murky, indistinct inversion filter that looks like a film negative, and remarkably few ghosts.

Rescue Mediums is loaded with the typical spiritualist hooey of premonitions, visions, impressions, psychic drawings, scrying, and vague, generalized, otherworldly messages about basements and stairs. The pair of mediums egg each other on and blatantly feed each other info, and often seem confused by the other psychic’s schtick, but each begrudgingly agrees to go along with the ad-libbed, ludicrous dialogue because she doesn’t have a better idea at the moment. They cautiously creep around the stigmatized property, jump at the sight of unexplained shadows that only they see and never seem to appear on camera, dramatically touch trees, brick walls, and ceremonial knives, become attuned to energy shifts, and take off their sandals to ground their energy. Nothing else really happens.

This occurs regularly in reality TV, but the crew is often seen in reflected surfaces to the point of distraction, and boom shadows make cameo appearances. In a show where shadows are often considered concrete evidence of ghosts, this is a problem. Plants, trees, walls, and other objects block shots, often obscuring the suspiciously-unseen paranormal occurrences. Cutaways to indistinct, simulated paranormal vignettes breaks up the monotony of psychics complaining about their brief ghost-induced afflictions. No shot lasts more than 5 seconds, and many only last a second before an edit. This technique is meant to mimic a quick, action-packed show, but don’t be fooled, there’s no action. However, it is quick, and the Rescue Mediums themselves only seem to be appear in half of the runtime of this 22-minute show.

Some of the more memorable psychic impressions the Rescue Mediums encounter consists of complaining of leg pains near a toaster, two mentions of hearing a death rattle, and talking about gas near a basement toilet. In a scene outdoors, the mediums are uncontrollably, psychically pulled into some not-especially-spooky suburban woods, and subsequently get scared by a twig. Meanwhile, the beleaguered homeowners seem to have a touch of disbelief on their faces, as though they are tolerating the yarn-spinning while their paycheck is being written off-camera.

I don’t like posting spoilers, but the twelfth episode on Netflix is must-see-TV. Be warned, you should strap your eyeballs down with something secure. They just might roll out of your head from the sight of the Rescue Mediums being unconvincingly attacked by a malevolent, unseen entity, causing them to repeatedly collapse in psychic conniptions, resulting in the pair flailing about on the homeowners’ waterbed. It’s embarrassingly awkward, hilarious, and has to be seen to be believed.

Lacking the tepid scares, tension, or mystery that most paranormal programs seem to be able to muster, Rescue Mediums is like visiting a pain-wracked, slightly-tipsy, widowed aunt who inexplicably receives psychic messages from the beyond from spirits of early 20th-century ship captains, and then turns this into a media sensation, or at the very least 7 inexplicable seasons of TV programming, which sounds like the plot to the classic film The Ghost and Mrs. Muir, but that’s not important right now.

Rescue Mediums tries to scare, but doesn’t seem to really know how, as though the show’s creators have never seen a ghost hunting show, but read about the formula in the TV Guide. Rescue Mediums is a lot like the TV show Ghosthunters with the lights on, so the viewer can see the houses are often haunted by the tragedy of regrettable wallpaper borders.

Each episode of Rescue Mediums always ends with a glass of booze and a dreary pun, which is accidentally the most terrifying point of the program. It’s fascinatingly terrible, and seems to be created for easily frightened people with extremely short attention spans. It’s formulaic, painful to watch, and unintentionally humorous. It’s compelling and binge-worthy because it’s so awful.

Reality programs such as Rescue Mediums, and I’m using the term ‘reality’ very loosely, are churned out cheaply. With a budget in the tens of dollars, most of which is spent on the rental of limousines, ice cream trucks, and rickshaws, video special effects suites, and hooch, Rescue Mediums looks as though the producers spent every penny. If you insist on watching Rescue Mediums, you might want to invest in a box of wine yourself.

Rescue Mediums is mildly recommended for the very, very timid, people who are afraid of the dark, or those psychically compelled to like stuff that sucks.