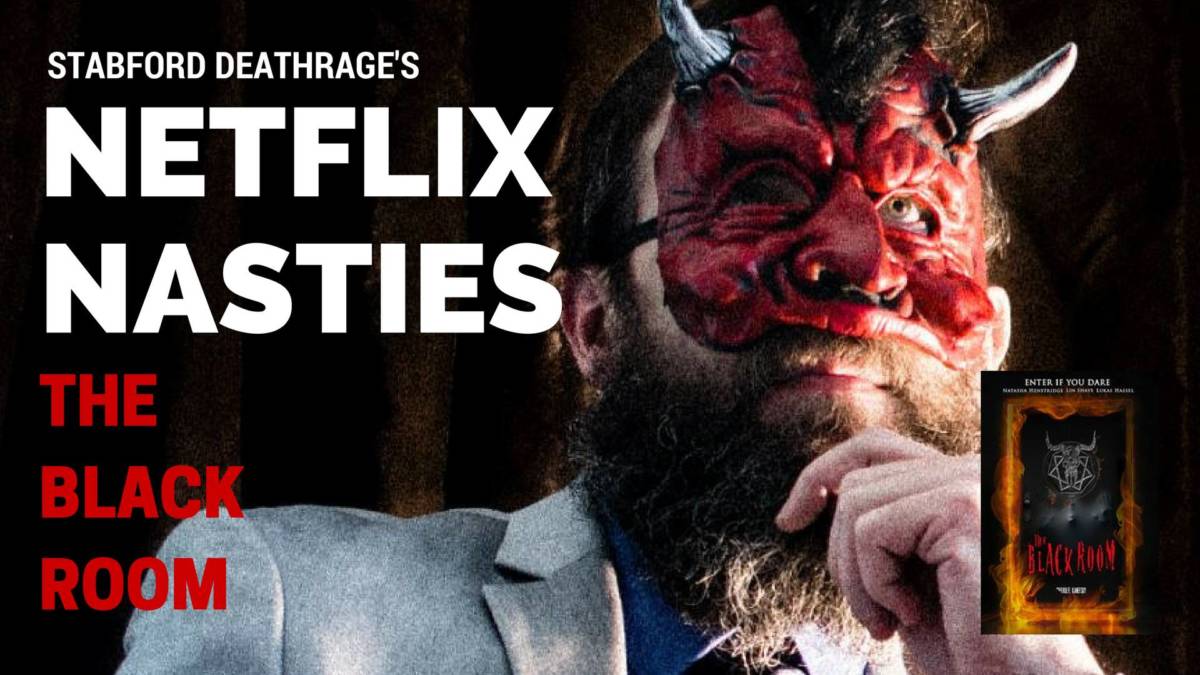 A couple moves into a house haunted by an uninteresting incubus summoned through a hackneyed 1970s swinger’s party, resulting in cringeworthy, gooey sexytime in this dreadful, cliched horror film.

In the basement of a Southern California home lurks one of those inexpensive, open-backed, metal shelves that are quite often found in basements, you know, the kind that holds old books and birdcages. Inexplicably, behind this set of open-backed shelves covered in books and birdcages is a sinister, old, wooden door with a mysterious symbol painted on it which is visible right there but has somehow gone undetected for decades, in spite of someone taking the time to stack old books and birdcages to half-heartedly conceal it. It’s as though someone said, ‘Hey guys, let’s obscure this sinister, dangerous old door, the only thing keeping hideous, gooey, murderous sex demons from overtaking the world, with a metal framework expressly designed to see birds through.’, which seems sensible.

Suddenly, the house’s ductwork paranormally fails, which fills the basement with fog, which often happens with ductwork, especially the kind of ductwork that’s used to better distribute fog throughout your house, which I’m sure is not at all an imaginary thing. The mysterious, not-quite hidden door opens, causing a disposable character played by Lin Shaye to start talking to herself.

I’m not going to sully the name of Lin Shaye. She’s a good sport in everything she’s in; whether she’s playing a leathery landlady in Kingpin, or playing a leathery next-door neighbor in There’s Something About Mary, or playing the not-especially leathery, heroic flight attendant in Snakes On A Plane. She elevates a role, no matter how ridiculous, and adds a touch of humor. Except in this film.

Sidebar: I might’ve written the word ‘nipple’ in my notes about The Black Room, and don’t remember exactly why I did it. I recall a sense of an absurd, grody idiocy surrounding the nipple, and it’s an avenue I’d rather not tread down again. This doesn’t at all mean that it wasn’t a memorable nipple. This just means that I probably removed it from my mental databank to save my sanity. Unfortunately, this means I might have to rewatch this film to see what the nipple brouhaha was all about, and I don’t want to, although starting a hippie jam band by the name of Nipple Brouhaha wouldn’t be the worst idea I’ve come up with.

Nope. I’m putting my foot down, and refusing to watch it again. You can’t make me.

As someone is covered in red goo, the titles roll.

Yes, I know. We’re only put to the opening credits.

I’m upset about it, too.

A realtor unconvincingly tells the house’s new owners that they’re going to be so happy living in this suspiciously furnished haunted house in spite of the horrible occurrence that happened in the basement that will never happen again, which shouldn’t cause anyone alarm.

After the homeowners attempt to christen their new home with some awkward, aborted sink-top hanky-panky, they venture into the basement they’ve never seen. I don’t know how other people buy houses, but I certainly wouldn’t buy a house without looking in the basement. How else will you know if you’ve got a malfunctioning sump pump, or a hidden door that has been graffitied with occult symbols, or an overabundance of red goo, or a grody nipple? Heck if I know. Anyway, they meet Oscar the Electrician who has been lurking down in the basement because why not, where he makes numerous, stilted innuendos about pipe. It’s pretty creepy, but the creep is only getting started, and not in a good way.

They all check out the fiery Southern California furnace that’s blazing down there because sure it is, then after Oscar is killed the owners don’t notice his screams or severed fingers. The wife enjoys some of the more enthusiastic, sexytime capabilities of the spin cycle of their washing machine, and the disposable gothic sister shows up, adding a brief moment of characterization. It doesn’t last.

Sleazing up the place, the possessed husband tries to get a table at a nearly empty restaurant, and causes a woman to suffer from Reverse Boobs Syndrome, which is just as inane as it sounds.

Suddenly, there’s a flashback to a really pathetic, occult swinger’s party in the haunted basement where people have a culty sing-along, then another disposable character is sexily beheaded by a clothes dryer.

The possessed husband uses the power of his mind to rip the Ma Bell Princess phone out of the wall like it’s 1975 because this overly melodramatic gesture fails to make use of the physical body the spirit has possessed, it’s dumb, cell phones exist, and has never happened in any other movie ever.

Finally, the Black Room is revealed, and it’s filled with gooey organs, dangling tentacles where you can see the strings, and damp hippies. Like my grandfather always said, ‘It’s all fun and games until someone is forced to chew through a pulsating umbilical cord that rhythmically squirts white liquid’, but my grandfather would confuse Burger King with McDonald’s and vice versa, but that’s kind of off-topic.

The movie ends a couple of times, and not a moment too soon.