GAME REVIEW: Narcosis (Xbox One) – Wet Behind the Ears 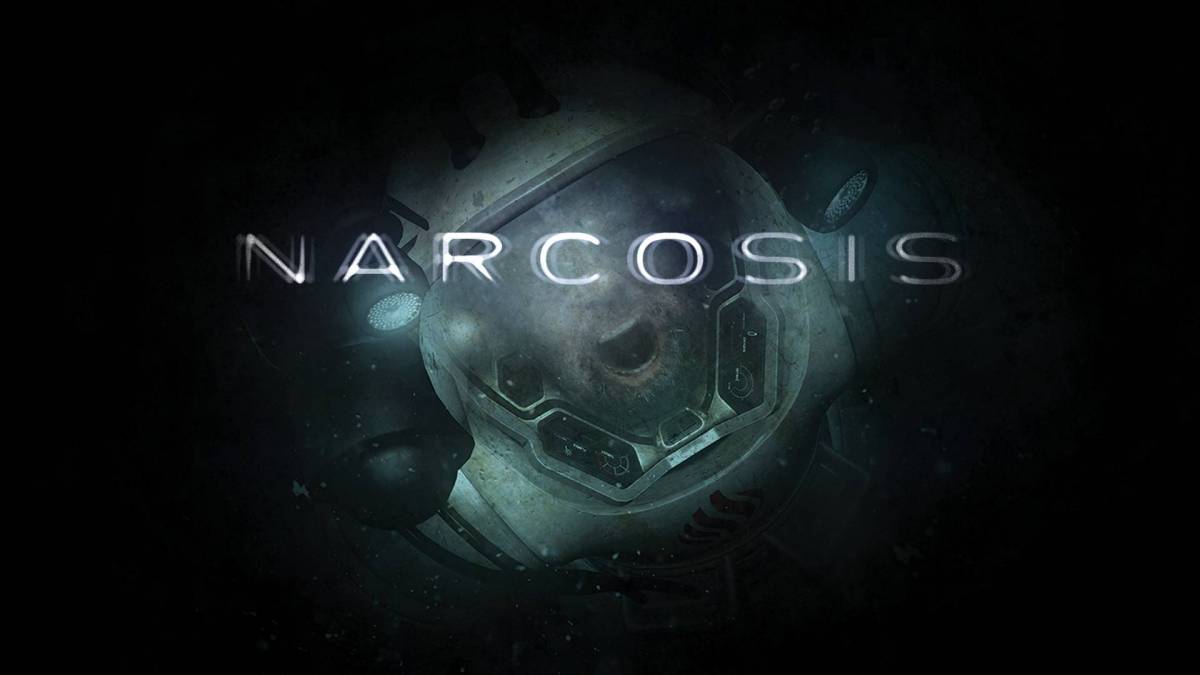 There’s nowhere scarier than the bottom of the ocean. The darkness is pervasive and its creatures look like they belong in a Dr. Seuss Halloween special; it’s simply not a place where human beings are supposed to be. As well as being totally uninhabitable without the use of heavy, cumbersome diving gear, one of the side-effects of being in the dark depths for too long is a condition known as “narcosis”, which causes madness and delusions.

After seeing Honor Code’s Narcosis through to the end, I can relate to that. It’s a game with many great ideas and a storyline that succeeds in providing genuine mystery, but its many frustrating, stifling design choices left me all at sea.

Narcosis starts off promisingly, opening with a tutorial that blends the past and the present. This quick sequence gives you enough background on the world to suck you in, aided by the superb voice acting of Jeff Mattas as the narrator. While listening to him talk, the tension went from my muscles and my shoulders managed to pull themselves down from the ceiling. A revelation of a voice performance, and one that is almost worth the price of admission on its own. 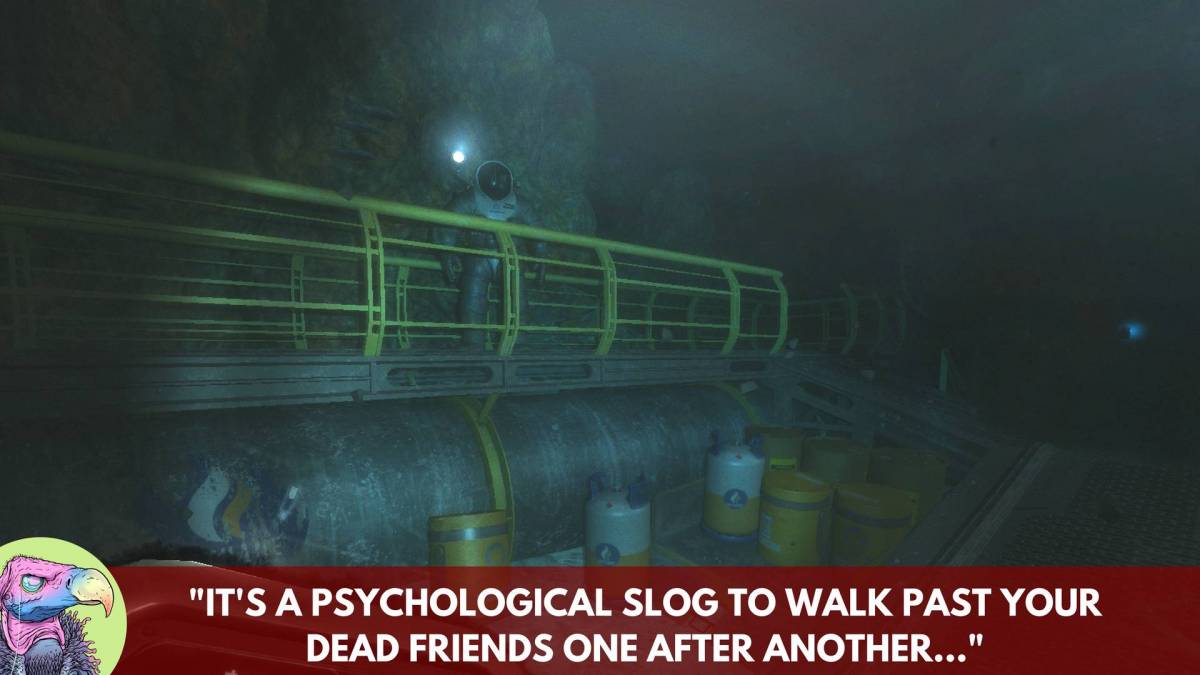 The gentle beginning doesn’t last long, however. As part of the Oceannova crew, your purpose near the seafloor isn’t made important to the story – it’s how you rise to the surface after a disaster that counts. Of course, this being a horror game (of sorts, which we’ll get back to later), it isn’t as simple as getting a submarine to come and pick you up. It’s a psychological slog to walk past your dead friends one after another, which is reflected in how Narcosis deals with mental health.

Narcosis feels like a strange marriage between an out-and-out horror game and a walking simulator while never properly fitting either label. Scares are scarce and not helped by some just about serviceable character models, while the sequences of simple walking are much too frequent. If you’re wanting the next jumpscare simulator from Narcosis, you may be disappointed. It’s more of a game about mood and atmosphere than it is the next monster around the corner. 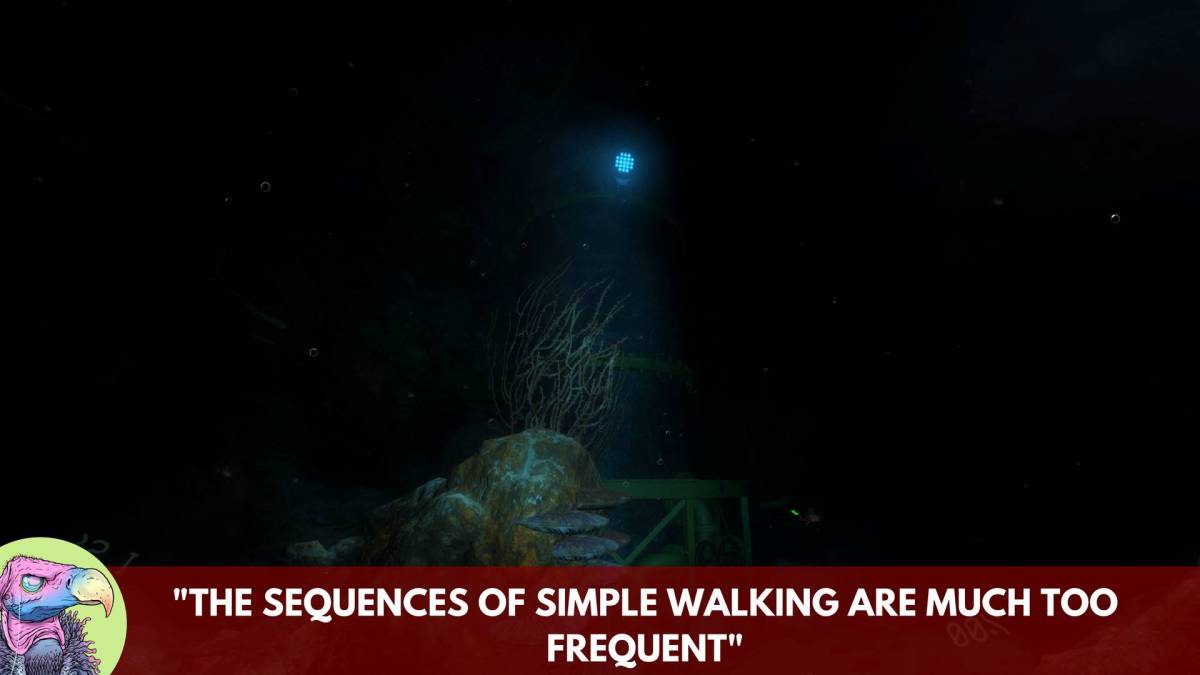 The game’s main mechanic revolves around keeping CO2 levels up, which is no easy task when everything around you has turned to shit. While it isn’t often a mad scramble to find a tank to replenish your air, it does introduce a strategic aspect to the game that isn’t immediately obvious. Walking, or simply doing anything, while wearing a diving suit is incredibly wearying, so it will drain over time. When the terror sets in, however, CO2 intake spikes, which means that it’s a mad dash to find what you need before you become a nervous wreck. This micro-management of air is also important when it comes to traversal: the suit comes equipped with a dash and lift function, helping you to get across gaps or reach higher points. Both of these drain CO2, so they should be reserved for “special occasions”.

The deeper the player goes, the more the protagonist unravels. It start off pretty lightly, shifting perspectives with transitions that are reminiscent of something like Layers of Fear. Before the game’s end, however, what it real and what is not becomes a blur with some quite striking, twisted imagery leaving an impression. While the story and unspooling of its main character is in full swing, Narcosis transports you to the bottom of the ocean and makes you feel like you’re in a watery snow globe. 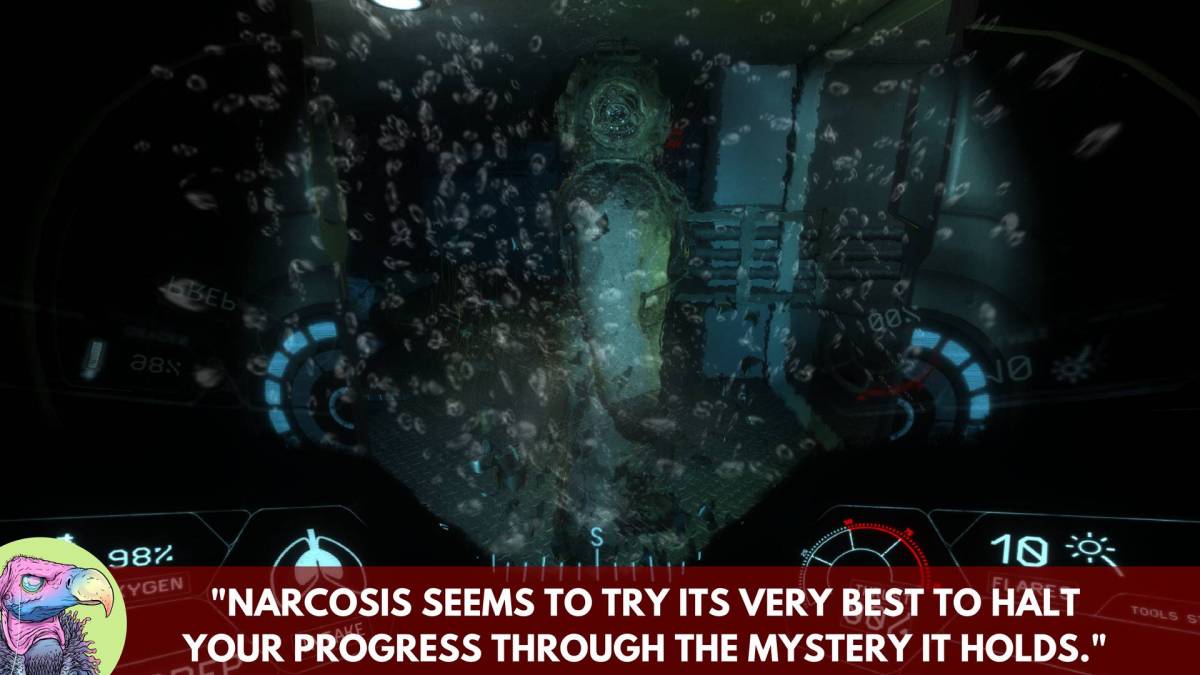 As good as its story is (which I would be doing a disservice if I just typed out for you right here), Narcosis seems to try its very best to halt your progress through the mystery it holds. Death is frequent, but compared to something like Outlast 2 where a failure state meant you would be back in the action within seconds, Narcosis gives you a few minutes for reflection or to catch up on your emails while it stutters back into life. If you’ve greeted death after falling down a hole that the restrictive FOV stopped you from seeing, it rankles a great deal to be asked to be patient.

The game also fails to endear itself with some harsh checkpoints, which will often boot you back to the very start of some “scenes”. This would be fine if it wasn’t for the speed at which you move, which is a submerged snail crawl. Combine that with listening to the same voice lines and dealing with the same irritating fishy attackers which you can only jankily bat away with a knife just to get back to where you left off and Narcosis becomes a chore.

From a performance point of view, Narcosis mostly makes the grade on Xbox One. There were no discernable framerate drops on my playthrough, but there were plenty of little hiccups, such as enemies clipping through the environment and becoming a bit spasmodic during combat, sometimes going through the player and confusing itself. There was one hard crash, which sucked a lot of the fun out for me as it meant retracing my steps through a game of hide-and-seek in one of the game’s biggest areas. It works, but you may run into a few problems.

Despite some pretty heavy grievances with Honor Code’s first foray as a studio, I kept coming back to it. The atmosphere it builds is terrific, aided by a soundtrack that avoids blaring horns and focuses instead on the smallness of the protagonist in a daunting, neverending sea of nothingness. Narcosis’ aesthetics, whether it’s an unwelcoming sea cave or the quickly deteriorating vestiges of the expedition, are articulately detailed and fascinating to walk through. It’s such a shame, then, that the simple task of navigating its locales for four hours is often made so maddening thanks to poor design decisions.

Xbox One copy provided by developers

Verdict
Despite boasting a few interesting ideas and a story well told, Narcosis is often too laborious and testing to offer incentive to get through the bad design decisions on show.
5.5
Cultured Vultures is a pop culture website established in 2013 covering all things gaming, movies, and more. We eat your words.
All The News On The Biggest Games