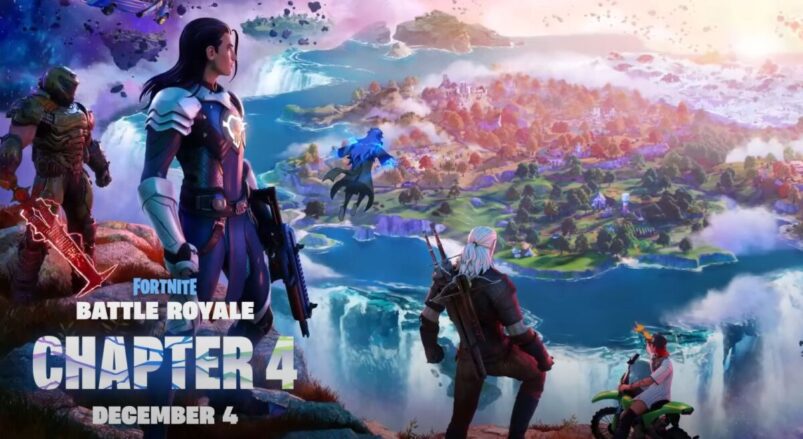 UPDATE: the trailer has been offically released, and Doom Slayer, Mr Beast, The Witcher, and The Hulk are officially confirmed for Chapter 4.

Just judging from the key art seen at the end of the trailer, Doom Slayer and Geralt will both feature in the new season Battle Pass, with Mr Beast and Hulk most likely releasing as Item Shop skins. And it also looks like All Might will be joining them.

ORIGINAL STORY: It really wouldn’t be a new Fortnite season (or even chapter) without some massive leak just before the big red button gets pushed, and that looks like it’s the case with the post-Fracture event’s unfinished cinematics being leaked ahead of time. There’ some pretty big collaborations on the way to the game, with the biggest YouTuber probably the headline act.

Check out the leaked Chapter 4 trailer below, but beware that there will be more story-specific spoilers in the video rather than random non-canon collaborations. If you don’t want the Fracture event to be spoiled for you, don’t watch it.

Fortnite Chapter 4 Cinematic in full (DO NOT WATCH IF YOU DO NOT WANT TO BE SPOILED)
Credit me and @GMatrixGames pic.twitter.com/OwCv0M7BUb

In the minute-long trailer, which will probably be properly available following the conclusion of the Fracture event on Fortnite’s YouTube channel, The Paradigm is seen in another reality before all kinds of landmasses, famous faces, and other oddities are pulled in by the Zero Point. At the end of the trailer, it seems as if they are creating a brand new map for the chapter ahead which may actually consistent of parts of previous maps too.

But who are those famous faces? Well, Mr. Beast is seen being dragged in by the Zero Point at one point and will likely be the biggest addition to the game considering he’s the most popular YouTuber around. Geralt of The Witcher fame can be seen jumping after something, Hulk is trundling along on what seems to be a bicycle, and Doom Slayer is doing what he does best: slaying demons. It’s not clear yet which of these will be added to the game as part of the Battle Pass, if any.

We will update this with all the official media when it is properly pushed out, but for now it looks Chapter 4 is starting off on an extremely high-profile foot. For now, let’s wait until after the Fracture event at 9PM GMT tonight.