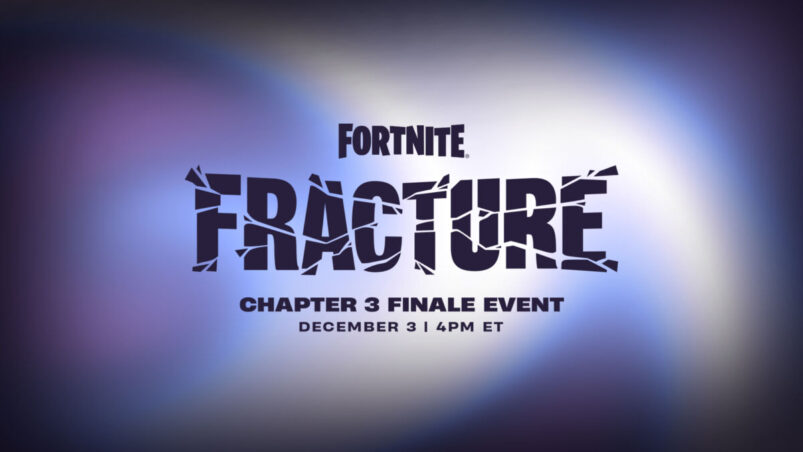 Perhaps in a bit of surprising move, Epic has announced Fortnite: Chapter 4 will drop later in 2022, bringing a close to Chapter 3 with it after only four seasons in total. But when exactly can you expect Chapter 4 to kick off, and what does Epic have in store?

The release of Chapter 4 will mean that Chapter 3 will end up as the shortest chapter to date. Having only started on December 5th, 2021, Chapter 3 will only be just over a year old by the time Chapter 4 rolls around, presumably to keep fans more excited than usual when some chapters can hit big lulls. It wouldn’t be a surprise to see them roll out new chapters on a more regular basis.

Chapter 4 is next on the agenda, though, so here’s everything you need to know about Fortnite’s next big foray, as well as what the end of Chapter 3 could entail.

UPDATE: Epic has shared the key art for the Fracture live event, which you can see above.

ORIGINAL STORY: Before Chapter 4 begins, Chapter 3 has to sign off in style with the Fracture live event on Saturday, December 3rd, 2022 at 4PM ET / 1 PM PT / 9PM GMT.

Players can join the live event playlist half an hour before the start of the event with parties of up to four friends.

Epic has done this in the past for massive occasions in Fortnite, with the end of Chapter 2 event, suitably called The End, putting a stop to the last couple of years of the chapter. While Chapter 2 has had a couple of major events, Fracture will no doubt be its largest, presumably bringing about The Nothing and The Herald’s major plan, with most of the Island currently covered in Chrome.

What will happen in the event? Well, nothing good.

Based on the previous history of when Chapters have begun following huge events, Chapter 4 should begin the day after Fracture, December 4th, 2022, though this is not yet confirmed.

This is usually because the game has to go into sustained downtime to apply such a huge array of new features, with it even arguably becoming a whole new game. While Chapter 3 didn’t feel like a gigantic leap from Chapter 2, you could argue that Chapter 2 did compared to Chapter 1.

With Creative 2.0 right around the corner, there’s every chance that it will be the biggest Fortnite update ever.

Fortnite: Chapter 4 – What To Expect

Official word on Chapter 4 is, of course, a little on the light side as of right now, but insiders and leakers believe that it will be a pretty significant change for Fortnite as we know it.

A new map is believed to be on the way, having already been hinted at in the files by the name of “Asteria,” which follows the naming convention of the last three maps: Athena, Apollo, and Artemis. All of these are names of Greek gods.

Apart from that, there is very little really to go off, except for the fact that Creative 2.0 is expected to land either with the launch of Season 4 or somewhere around it, and that things like a first-person mode and rideable winged animals are also on the cards. A lot of hype is being built around Creative 2.0 and just how much it may change the game (and maybe even multiplayer gaming in general), so here’s hoping it manages to match the hype.

However, what’s interesting is how plans seem to have changed at some point. Industry insider Tom Henderson tweeted not long ago that Chapter 3 – Season 5 would be starting on December 5th, 2022.

Fortnite Chapter 3, Season 5 will start on the 5th of December, 2022. pic.twitter.com/0cQp5ZHrAm

Wherever Henderson’s information was outdated or plans abruptly changed will likely never be answered, but in the face of Fortnite being at maybe its lowest point since it hit the big time, a big shake-up like this may be exactly what Fortnite needs.

UPDATE NOVEMBER 14th: it doesn’t look like Unreal Editor for Fortnite (UEFN) will be launching alongside Chapter 4, and it will instead be coming in January 2023.

Sorry folks, the team is working super hard, but the Unreal Editor for Fortnite (UEFN) has been delayed to late January 2023.

This might be a disappointment for some, but it does allow the early Chapter 4 hype to be spread out a bit more, rather than having everything drop on a single day. One month after it launches, UEFN will also release.