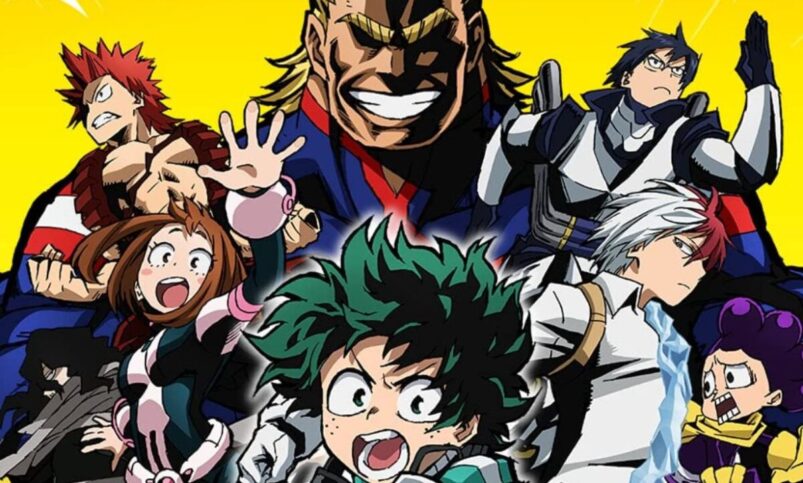 In amidst all of the clamouring around the launch of Fortnite: Chapter 4 – Season 1, there were plenty of easter eggs and hints to be found in its cinematic trailer, including what looks like a collaboration with arguably the hottest anime of winter 2022: My Hero Academia.

There was a lot going on in the A New Beginning trailer for the upcoming chapter, but eagle-eyed viewers may have spotted a pickaxe that looks like something from All Might’s wardrobe at around the 32 second mark.

Here’s All Might, full name Toshinori Yagi, in all his glory for reference.

While it’s very similar iconography, it wasn’t 100% clear that this was actually a collaboration with My Hero Academia until the end of the trailer when copyright information for KH/S, MP, the copyright holders for My Hero Academia, could be seen at the bottom of the screen.

Fortnite is indeed collaborating with My Hero Academia, it would seem. But what exactly can you expect?

UPDATE: Deku (Izuku Midoriya) has been confirmed as one of the MHA skins making their way to Fortnite, as he was seen in the launch trailer for Season 1.

As well as Deku, we will also be getting MHA’s All Might (complete with Toshinori Yagi, his less than super variant), Bakugo, and Ochaca Uraraka.

Check out a full video showcasing all of the My Hero Academia skins and cosmetics in Fortnite below.

Judging from the power emanating from Deku in the trailer, we may be getting some kind of One For All Mythic as well. Here’s a first look at the Deku Smash mythic.

ORIGINAL STORY: Judging from the fact that All Might’s famous suit design appears on the pickaxe, it’s not too wild to suggest that he will be coming to the game as a skin.

There are a lot of potential MHA skins that could come to the game, but based on the fact that most of them are teenagers, they may end up being too short. It’s not like they’re Morty and can be given a robot to make them taller.

We will update this when we have all of the info.

Based on the prices of every single collaboration over the past few years, My Hero Academia’s skins should cost around 1500 V-Bucks when added to the Item Shop. However, as All Might is of Legendary rarity, he should cost 2000 V-Bucks,

UPDATE: Epic has confirmed that the collaboration will happen on December 16th in a tweet that also included All Might’s iconic phrase.

A Japanese magazine originally leaked that the collaboration would be starting from Friday, December 16th, 2022.

This makes it seem like there will be more than just a skin coming as part of this crossover, possibly even some kind of LTM and maybe other skins apart from Deku. However, it’s not immediately clear just how legitimate this leak is, so continue watching this space.

ORIGINAL STORY: There’s no set release date for MHA coming to Fortnite just yet, but we believe that it will be sometime in January.

This is because Winterfest is coming up, and there will be loads of general updates for Chapter 4 as it launches that will keep the playerbase’s interest. There’s also several collaborations already confirmed, with a couple as part of the Battle Pass, so Epic might be wary of really overdoing it.

My Hero Academia: Season 6 will also be nearing its climax by January, so it does make sense.