This Easter season, we turn our attention to Steel Magnolias, and what it shows us about grief and loss. 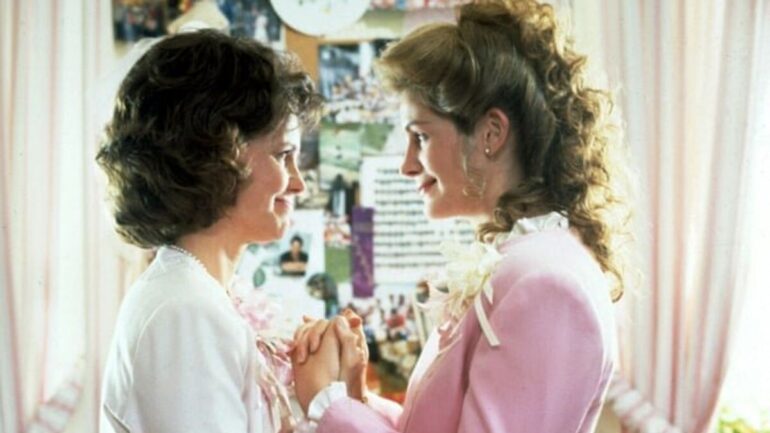 Every Easter, I tackle a film or book that deals with themes of the season, or has a setting that occurs around that time of the year. There was Scorsese’s Silence in 2019, and Chocolat in 2020. This year, I opted for a film which begins and ends on Easter, and while the film isn’t exactly on the nose with its Easter themes, it still deals with a subject matter inherent to the season – that of insurmountable loss, and the path after that, moving forward to some sense of recovery and healing.

Steel Magnolias is very much a women’s film, and if we weren’t sure of that, the abundance of pink during Shelby’s (Julia Roberts) wedding scene should tip us off. The film focuses on the relationships between six women, the “steel magnolias” in question, who like to gather and get their hair done (and sometimes even their nails), eagerly embracing their softer, feminine sides, but are steely on the inside – there is no challenge or obstacle they can’t overcome. There’s so much humour and quick-witted one liners when these women gather, with Shirley MacLaine’s Ouiser giving her loud (and usually unwanted) opinion on how she doesn’t watch plays and would rather nap at home, to Dolly Parton’s Truvy Jones whose always ready for some gossip.

At the heart of these interactions are mother and daughter M’Lynn (Sally Field) and Shelby, who are first introduced to us through regular mother and daughter bickering on Shelby’s wedding day, before the realisation of something darker that guides M’Lynn’s overprotective ways. Shelby has type 1 diabetes, a condition that almost stopped her from getting married, since pregnancy would compound and possibly worsen her medical situation. But after some convincing from husband-to-be Jackson (Dylan McDermott), she agrees to marry him and makes the decision to go into her marriage with a sense of optimism.

Shelby’s wedding takes place on the brink of Easter – her wedding is a colourful affair, and she herself wears a pink suit as she leaves her parents’ house on the way to her new life. Then time moves on, taking us to July, Christmas, before we are taken years into the future. Despite Shelby looking into adoption as a possibility, she makes the choice to try and get pregnant, and when she does, is happy to embrace what little time she has in exchange for being a mother. She discounts her mother’s warnings, and when Jack Jr. comes into the world, we think that maybe M’Lynn might have imagined the worst because that’s what a mother does. A mother never stops worrying about their children, even as they grow up and become adults, flying the coop to build their own nests elsewhere.

You see, Steel Magnolias entertains with all the back and forth banter, with so many funny moments inundating the film. It tricks you into bathing in its sunny atmosphere, and then hits you with the sometimes devastating truths of life. While Shelby gets her nails done on a random day in Truvy’s salon, it is there we find out what’s happened in the interim since giving birth. Shelby’s kidneys are in trouble, and she’s been going through dialysis to tide her by. Then she drops the bombshell: she’s going to get a kidney transplant, and M’Lynn’s going to give her one of her own. The women are stunned, for even though the pair speak with levity and light-hearted humour, we can’t ignore the life threatening situation at hand for both women.

The transplant goes well, but ultimately, Shelby’s body is unable to cope and she collapses during Halloween, plunging into a coma. M’Lynn stubbornly holds on to her daughter, starting fake arguments with her, daring her to come back and speak her mind. But it’s not up to M’Lynn, and despite her tenacious grip on Shelby, she has to watch while they unplug her from life support, and she passes away. As M’Lynn stands at her daughter’s grave, having buried her in a pink suit, she laments having to feel what a parent should never feel – to be alive when your child is not.

Sally Field is great here, fleshing out M’Lynn’s anger for Shelby being taken so soon, at the unfairness of it all – no parent should have to bury their own child. There is frustration with God, at the order of things. But the whys aren’t answered. There is sorrow and loss, just as much as there is joy and happiness. As the film transitions to the final scene, that of the Easter egg hunt, we see children dressed in such vibrant, celebratory colours, seeking out eggs as colourful as their attire. In a sea of egg hunters, we spot Jack Jr., who holds the hand of his father tightly as he looks around for eggs to fill his basket.

Later on, as Clairee (Olympia Dukakis) sits him on her lap and tells him a story about a beautiful woman named Shelby, we can’t help but recall the tragic scene just moments before, now having to watch this boy traverse the world without his mother. Yes, there is pathos laced into this moment, but Steel Magnolias doesn’t want us to be pulled head-first into the poignancy of things. There will be loss, death, and the grief that drenches you after. Then we laugh at ourselves through the tears, learning to accept the most difficult of situations, and move on.