When Easter comes along, you know we have to talk about chocolate. 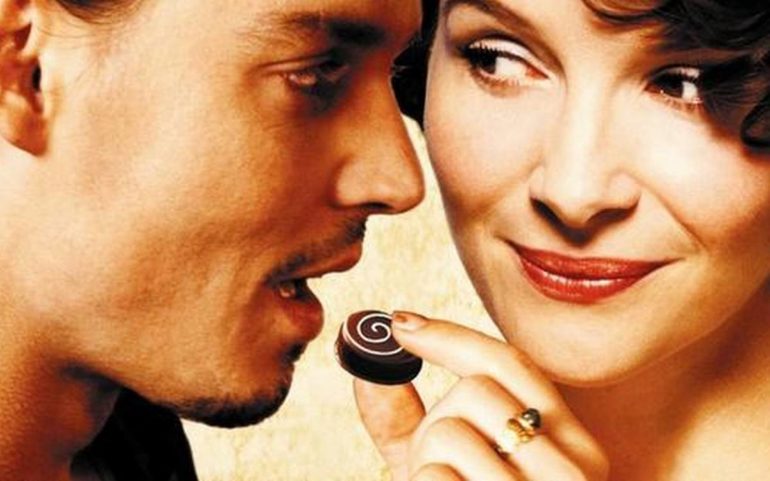 The Easter weekend is a strange affair this year. Usually when Good Friday arrives, the season of Lent is over and then it’s time for rejoicing. We gather in big groups, celebrating with our family and friends, filled with gratitude and praise. But now, there is only distance, social distance from all those close to us, the sudden realisation that without other people, our lives are quite empty. In the midst of all this tragedy, how can we steer ourselves towards a sense of hope? Maybe art can help us in these unprecedented times.

With that purpose in mind, I have chosen Chocolat by Joanne Harris, which has a film adaptation starring Juliette Binoche and Johnny Depp if you want to check that out – no other novel encapsulates the 2 tenets (chocolate and the church) of Easter quite like this text. It begins with “hot greasy scents of frying pancakes”, the food descriptions leaving me weak as I make my way through the novel.

Vianne and her daughter Anouk meander into a new town, coming in on the air of Mardi Gras, settling into their new lives. Vianne opens a chocolate confectionery and begins her business just as the season of Lent begins, and we truly see the tension between the sensual pleasures of chocolate and the restraint required of the season. Francis Reynard, the priest and antagonist to Vianne’s protagonist, frowns at this whole enterprise, calling the whole display “perverse”.

While Vianne is all softness with warm laughter, he is an immovable stone, despising his fellow men for their weakness, yearning for the days of the Old Testament, where the trials and tribulations are great and men are called upon to make immense sacrifices and did so willingly. I mean, just think of Abraham’s near sacrifice of his son Isaac just because God desired it.

Vianne’s mother was a witch (or so she says), plunging both Vianne and herself into the wandering gypsy lifestyle, going wherever the wind blew them, until her mother discovers she has cancer. She sees it coming, but refuses to do anything about it, wanting to die on her own terms. Witches and magic have always been presented as a feminine legacy (think Alice Hoffman’s Practical Magic), with Vianne and her daughter picking up the same wandering ways after her mother’s death. This exists in opposition to patriarchal order, which demands the presence of a man in the established family unit, which is distinctly absent from Vianne’s life both with her mother and daughter.

However, after years of travel, Vianne desires roots, for herself and her daughter; underneath all that is Vianne’s fear that her mother’s fate will also become her own before she can craft this space for Anouk. As she settles into Lansquenet, she experiences the full force of the priest’s disapproval, having to contend with him and his “man-shaped darkness”. While Vianne feels everyone could use a little self-indulgence, this doesn’t sit well with him, and he uses the power of the church to sway the people away from her “sinful” presence, encouraging abstinence and therefore, a boycotting of her business.

It is not the first conflict with religious authority that Vianne has experienced, her mother herself nearly giving her up because a priest was trying to convince her that it is the appropriate thing to do. The irony here is immense, for how can separating a child from its mother be the right move to make? It is the same with the priest’s actions, which encourage othering and distance, instead of connection and understanding. These lines of acceptance are etched into the town as well, requiring all who dwell within to toe the line.

But his sermons and preaching are unable to stop the people, who eventually allow themselves to wander into Vianne’s shop, tasting the magic of her confectionery, gradually seeing that the joy of being human exists in small comforts like this. Vianne always knows what would tickle their fancy (a show of her witchy skill), selling them pretty dreams all wrapped up in a pretty box. The experience of being human is akin to that of making chocolate or cooking a meal, all that work and preparation into creating a pleasurable outcome that lasts but a moment, a reminder of the transient nature of our lives.

Many who have read Chocolat might think that it is a book that condemns the church through the antagonistic presence of the priest, and lauds the secular attributes Vianne represents, but this isn’t the case. Francis faces doubts and struggles as well. He leads church-goers away because he believes it is the moral thing to do, not because he is an evil man. The way he behaves is also a product of the teachings of the priest that came before him, where he believes he needs to resist all that Vianne represents.

But because he is myopic, he cannot see beyond his worldview to understand that all Vianne wants is a home for her daughter, a space to belong. Empathy and reaching out to others is the strongest asset we have, so this Easter season, let us reach out to others, extending our hands into the community (digitally of course) and lend ourselves to love and care those in need, crafting a space of belonging in the midst of social distance.