"Would I have relinquished my faith or chosen to let others die for a God they may not comprehend?" 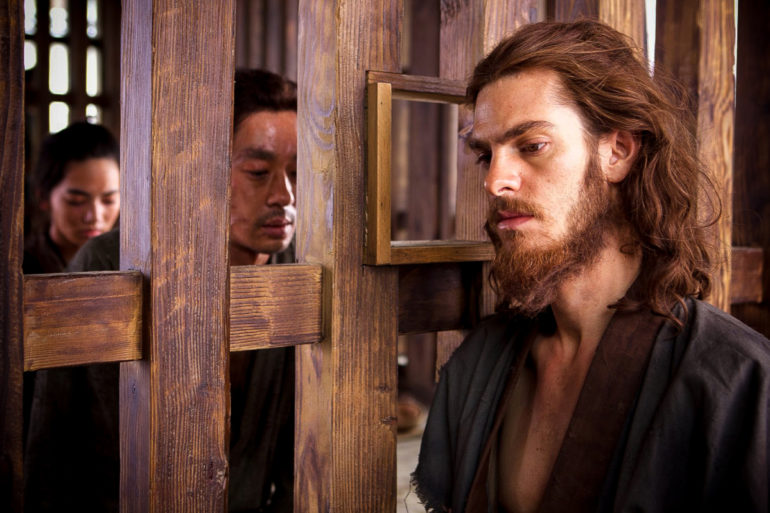 It is fairly apt that I found myself thinking about this film during this Easter season. Easter always strikes me as such a contrary season. There is such joy and celebration, because Christ has risen from the dead. But the road to all this jubilance is paved with the blood and suffering of a man who is God. Jesus suffered for us, so we must prove ourselves worthy of that sacrifice. The catch here is that we are not worthy, we can never be. We are constant slaves to our weaknesses and fears. Even the greatest among us are no exception.

The setting of the movie is a Japan that wants nothing to do with Christianity. There cannot be any Christian roots because the country is a swamp; nothing can ever take root. Priests Rodrigues (Andrew Garfield) and Garupe (Adam Driver) travel to Japan in the hopes of finding one of their own, a Father Ferreira (Liam Neeson), who is said to have committed the act of apostasy. The Japanese realise that killing the priests do no good, since it makes martyrs out of them and only bring more to the faith. Their best cause of action is to torture other believers, in the hope that this forces the priests to apostatise.

For most of the movie, Rodrigues struggles with the silence of God. How can God allow his people to suffer in his name and do nothing? It is the perennial question of believers and non-believers alike. A God who is benevolent and kind should not allow such suffering and despair. As Rodrigues watches the believers dangling head-first in pits, he is faced with the hardest of decisions. He can continue to stay silent and allow these followers of Christ to die because of him, or he can apostatise and spare their lives.

It is in this moment of indecision that he hears a voice breaking through that silence, a voice telling him to step on the image of Christ. I love the ambiguity of this voice, because while it is clear that Rodrigues believes it is God, it could very easily be his own mind breaking. Some have even insinuated that it could be the devil. That certainly has cause, since in his weakest moment, he is given a way out; the voice allows him to tread on the image and speaks of being beside him in his moments of suffering.

The moment he steps on the image, the film is drenched in silence, with only the visuals of Rodrigues’ agony filling the screen. Simultaneously, he brings the agony of the others to a halt as they are taken out of the pit. The sound of the rooster crowing after that adds a touch of symbolism, since it is the main feature in Peter’s betrayal of Jesus. It is apparent that Rodrigues’ action is blasphemous and sinful, a betrayal of the oaths he took in service of God’s church.

It is a moment that I go back constantly to in my mind. I wonder what I would have done if I were in his shoes. Would I have relinquished my faith or chosen to let others die for a God they may not comprehend? I cannot know for sure. That is the brilliance of this film: the parallel existences of human frailty and human strength.

As I pen this, I do think about how unfashionable it is to discuss religion in a society that doesn’t speak openly about it. My faith has always been something I kept personally, feeling that while I may believe, it is perhaps not my place to speak so freely about it to others who may not feel the same. My behaviour is rather like Rodrigues’ towards the end of the film, his faith becoming something he privately held but publicly denounced.

Maybe watching this film again made me want to brave, to write about how this movie stirred a deep reflection within me, to own my faith instead of letting my skepticism choke me. Or maybe nothing has changed. I write this article and then I go back to living my life the way I was. After all, it is like Ferreira says, “Mountains and rivers can be moved. But man’s nature cannot be moved.” I don’t know if I can be brave when I have to be. All I can do is pray through the silence, and maybe one day I’ll get an answer. Or not.