There's plenty more of that unique voice to go round. 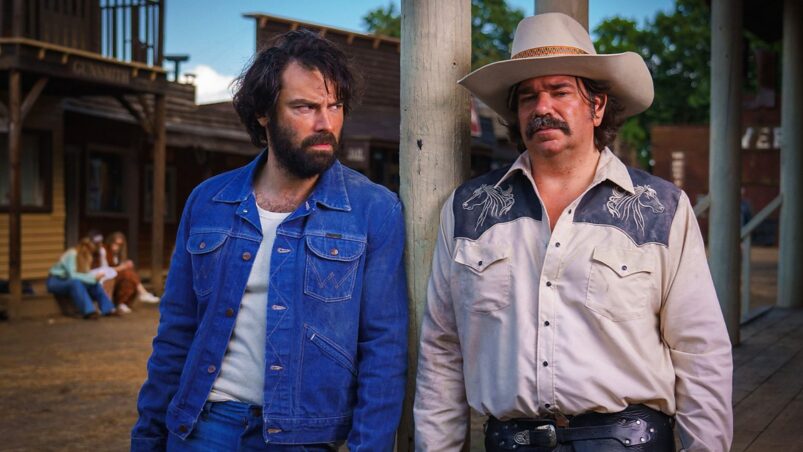 Following his recent US-based spin-off show Toast in Tinseltown, as well as appearances in everything from Archer to Star Wars: The Book of Boba Fett, Matt Berry is one of several British comedians increasingly getting attention across the Atlantic. Having previously been best known for appearing in some relatively obscure cult comedies, we break down some of the best ones out there for newcomers to check out. 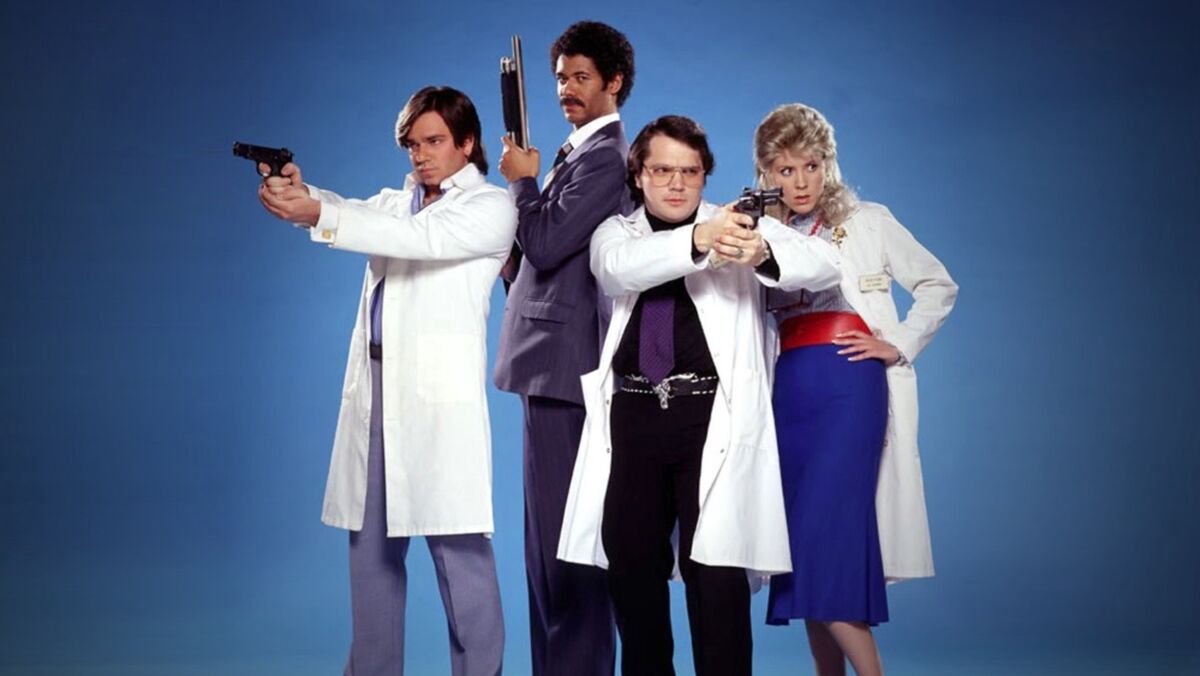 Perhaps one of the most underrated and brilliant comedy series to air throughout the 2000s, Darkplace helped to kick start Matt Berry’s acting career, as well as others such as Richard Ayoade. Framed around a fictional 80’s TV series, created by the atrociously bad and self-aggrandizing horror writer Garth Marenghi, played brilliantly by Matthew Holness. Marenghi is a creation of comic genius, incredibly full of himself with a misplaced conviction in his own genius, he boasts that he’s one of the few people “who’s written more books than they’ve read.”

The series is a pitch-perfect pastiche of all kinds of poor quality, low budget horror and sci-fi knock offs, with purposefully bad acting, special effects, and sound design that could be straight out of The Room, as well as a framing device that depicts the cast and crew looking back on their time on the show, in segments reminiscent of the various behind the scenes documentaries made for old series like the original Doctor Who.

These kinds of pastiches are what have helped make the series a cult icon, but just as brilliant is the dialogue and line delivery from the likes of Berry and Ayoade, who are perfectly cast here. With the already wooden dialogue made even more surreal through Berry’s distinctive voice work, it’s one of many series featuring this roster of performers where one couldn’t imagine the role being played by anyone else.

A weird little gem from 2006 which ran for six weeks on the then still new BBC Three, Snuff Box is practically the definition of obscure, gaining much of its cult following only after the fact through circling the internet. The first show written by Matt Berry, along with his Mighty Boosh co-star Rich Fulcher, it featured the same surrealism as The Mighty Boosh, but was much darker in its sense of humour, with numerous sketches touching upon taboo subjects such as rape, drug use, and sexual perversion.

The show is a bewildering, disjointed tableau of ideas, which blends a very loose narrative following its two leads – a pair of hangmen who spend their days necking whisky in a gentleman’s club – with a whole set of other, entirely disconnected sketches, both featuring the same two performers. Numerous sketches revel in presenting seemingly run of the mill events and taking them in completely unexpected, violent directions – a musicians tribute to his brother’s turns out to be an energetic, highly synthesised, electric beat; a shopper trying to purchase a pair of boots from a local store is continually threatened and assaulted.

The narrative seems completely out of step with reality. Some sketches will be filmed in a stylised, disorientated manner that feels reminiscent of other shows at the time such as Jam, while the whole series seems to take place out of time. Ostensibly set in the modern day, we’re nevertheless presented with a version of Britain where hanging is still practiced, while music and pop culture seem to sit in limbo in the 1970s. There are frequent caricatures or pastiches of stars of that era or shows like The Old Grey Whistle Test, while the soundtrack itself, including the theme tune, is made up of ambient jazz & other pieces arranged and recorded by Berry himself.

With its dark and surreal humour, it’s perhaps not surprising that Snuff Box didn’t get much traction on its release, especially since it was aired only on a late-night slot on the still relatively new channel BBC Three. But for fans of comedy that’s a bit darker and more experimental, this is a show that feels utterly unique and distinctive.

The IT Crowd is a Channel 4 sitcom following a bunch of IT nerds residing in an office basement that remains (in spite of the odd episode where you can see some of Linehan’s dodgier views poking out) one of the most consistently entertaining and well written British sitcoms in recent years, ranking up there with the likes of Father Ted as one of the most popular comedies produced by Channel 4. From the start the series impressed, with a pitch perfect combination of comedy writing and a stellar cast, including Chris O’Dowd and Richard Ayoade.

Chris Morris’s recurring role as manic boss Renholm through the first season should by rights have been impossible to match. But it is perhaps in the second season, when Berry replaces him as his lothario son where the show becomes truly brilliant, and it was the role that definitively made Berry’s name. With his over the top performance, he is a brilliant fit for the absurd, reckless, lothario multi-millionaire, and complements the rest of the cast perfectly. His first appearance, in The Return of the Golden Child, is still perhaps the single greatest introduction to any comedy character out there, it immediately selling the audience on this new dynamic.

The BBC’s recent Toast in Tinseltown sequel to this Channel 4 series is entertaining enough in how it transfers Matt Berry’s stuffy and frustrated lead character from London to Hollywood, but it does perhaps shed some of what made the first three seasons tick in doing so. Besides its surreal sense of humour and pseudo-seventies style, the initial three seasons of Toast of London are just as entertaining for their retinue of bizarre and out there characters, few of which work as well in the new versions American locale.

While plenty of characters in the new season are still entertaining enough, few feel quite as memorable or as plain odd as those who show up throughout Toast of London, and invariably, a lot of the highlights in the new season are those where older characters make appearances. In addition to this, references to all kinds of fixtures of British pop culture and theatre worlds, as well as the musical numbers appearing throughout give the original series a much more distinctive feel, far more reminiscent of the likes of Snuff Box.

Toast is well worth checking out for something that lacks the kind of dark material Snuff Box has, but which like that show takes place in an absurd, out of time version of the country, one which allows the show’s creators to fully embrace their different musical and comedic influences.

5. What We Do In The Shadows

Taika Waititi’s directorial debut, the New Zealand mockumentary following a group of vampire housemates in their day to day routines proved an instant cult classic for how it poked fun at the tropes of the vampire genre, and when it was announced it would be getting a television remake most fans must have expected the result wouldn’t match up. America, after all, has a bit of a bad record when it comes to trying to remake other countries’ comedies.

From the aforementioned IT Crowd, to others like Red Dwarf or Fawlty Towers, often one kind of humour just doesn’t automatically translate to the sensibilities of another country’s TV landscape. But with a stellar cast, including the great Kayvan Novak, and some great writing that’s true to the spirit of the original film, the TV version of What We Do In The Shadows not only proves its equal, but in some places surpasses it, with hilarious concepts such as that of an energy vampire, draining the life force of office colleagues.

The TV show, now on its third season, has gone from strength to strength, bringing in all kinds of big-name guest stars, from Waititi himself to Mark Hamill, and is well worth checking out both for fans of Matt Berry and of the film.

READ MORE: 5 Movies From 2018 That Would Make Great TV Shows