Bleed 2 (Xbox One) REVIEW – More of the Good Stuff 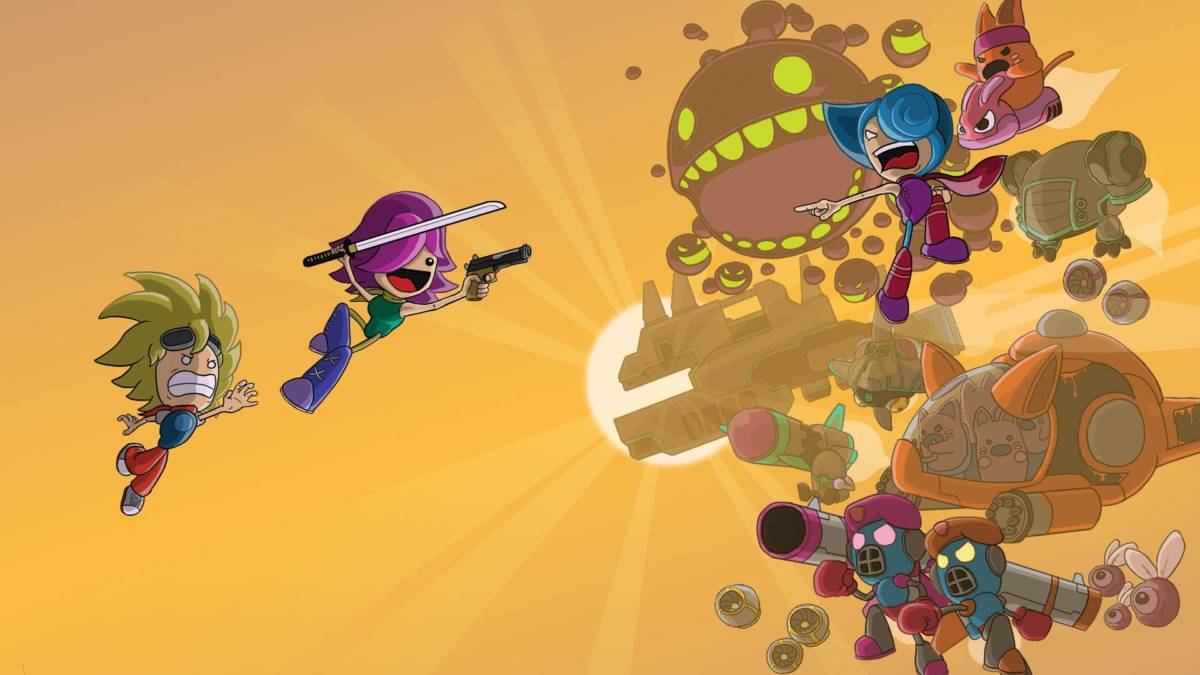 Bleed has somewhat of a strange and storied history with gaming. Originally developed as an Xbox Live Indie Game back in 2012, developers Bootdisk Revolution ported the game to Steam and Windows just a few months after, but it took until 2017 for Bleed to be brought to PS4 and Xbox One. Fortunately, Bootdisk didn’t wait five years to bring us the sequel.

Like the previous game, Bleed 2’s console port was handled by Digerati Distribution and Nephilim Game Studios, who’ve carried on the great work of bringing Bleed’s trademark shoot ‘em up action to the current gen consoles. If you’ve already skipped ahead to the end of the review, you’ll notice that “just like the first game” is a common theme for the sequel.

Just like the first game, Bleed 2 is a 2D platforming bullet hell shooter with a primary focus on boss fights. If you played Cuphead and possibly thought it wasn’t quite fast enough for you, Bleed is right up your alley. This is more like Metal Slug on cocaine. Lots and lots of cocaine. Lots of cocaine. SO MUCH- you get the picture. 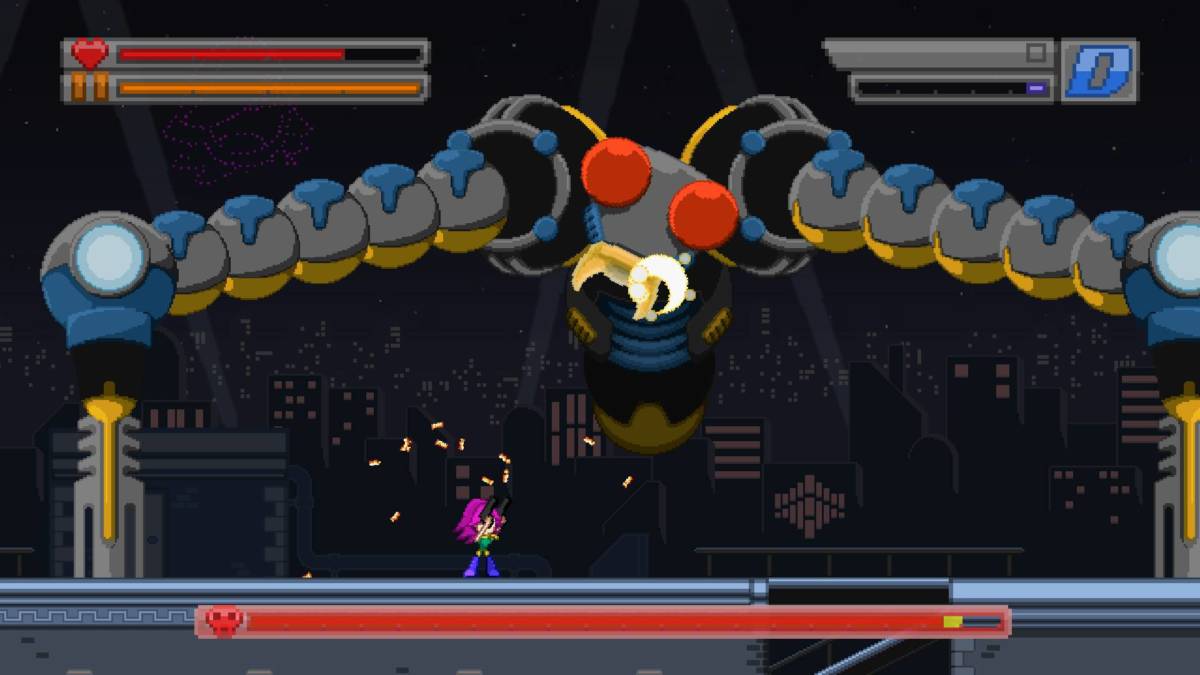 You control leading lady Wryn, who must stop an invasion by teaming up with The Rival from the previous game. That’s about all the plot you need, really. The shoot ‘em up genre isn’t exactly known for the riveting narrative depth, but who cares? Sometimes you just need to switch your brain off and blast some bad guys, and Bleed is the perfect vehicle for that.

Playing as Wyrn is an absolute joy, as she’s the perfect blend of attack, defense and mobility. By default, she is equipped with dual pistols and a katana. Point the right stick and she will shoot a hail of bullets at anything unfortunate enough to stand in the way, while pressing the right bumper will cut a bloody swathe through her enemies.

The main usefulness of the katana is to reflect projectiles back into the faces of those smug sons of bitches that fired at you in the first place. If you see anything that looks pink, slicing it will return it to sender, usually causing massive damage to the recipient. If you’d prefer to just get out of danger, you also possess three air dashes which can be used to speed around the level and get out of harm’s way. 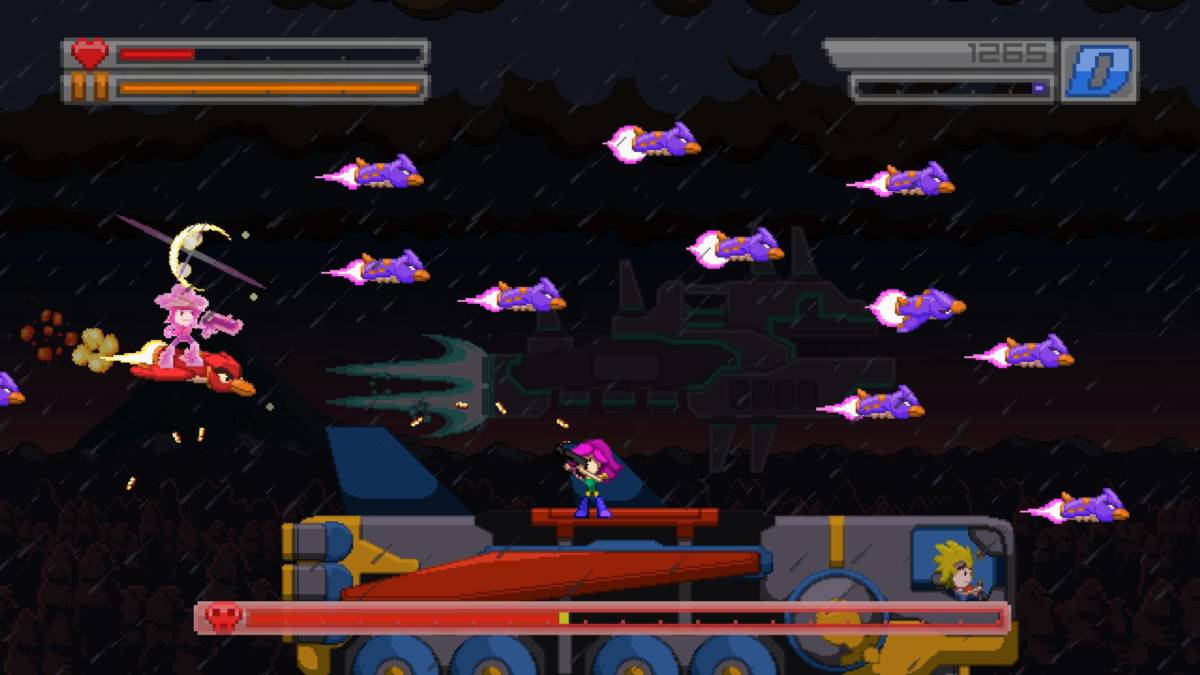 Bleed 2 is a short game, clocking in at only seven levels and about an hour of playtime on your first run. In fact, a competent player could run through the easy and normal modes in about half that, but that’s the point. With four difficulty levels, players will naturally want to take on the lower difficulty settings first before being tempted by the harder stuff. Plus, the game doesn’t begin to open up until you’ve logged your first completion, as that’s when you unlock access to new weapons and characters which radically change how you play the game.

For instance, finishing the game unlocks access to The Rival. Although he’s identical to Wryn in terms of moves and abilities, his sword deflects yellow projectiles instead of pink. Doesn’t sound like much of a game changer, but bosses like the Mysterious Ninja have attacks that are uniquely yellow, which offer up new strategies on how to win that fight.

If you need more proof as to Bleed 2’s longevity, you should know that Story Mode is merely a practice run for the game proper. One of the key modes of Bleed, and now the sequel, is Arcade Mode. While Story Mode gives you infinite retries on the path to the final boss, Arcade Mode gives you only the one. Seven stages, around 25 or so bosses, one life. Even on Easy Mode, which admittedly is fairly trivial for any veteran of the genre, this is the ultimate test. One mistake could cost you the entire run, which should appeal to any speed running freaks out there. 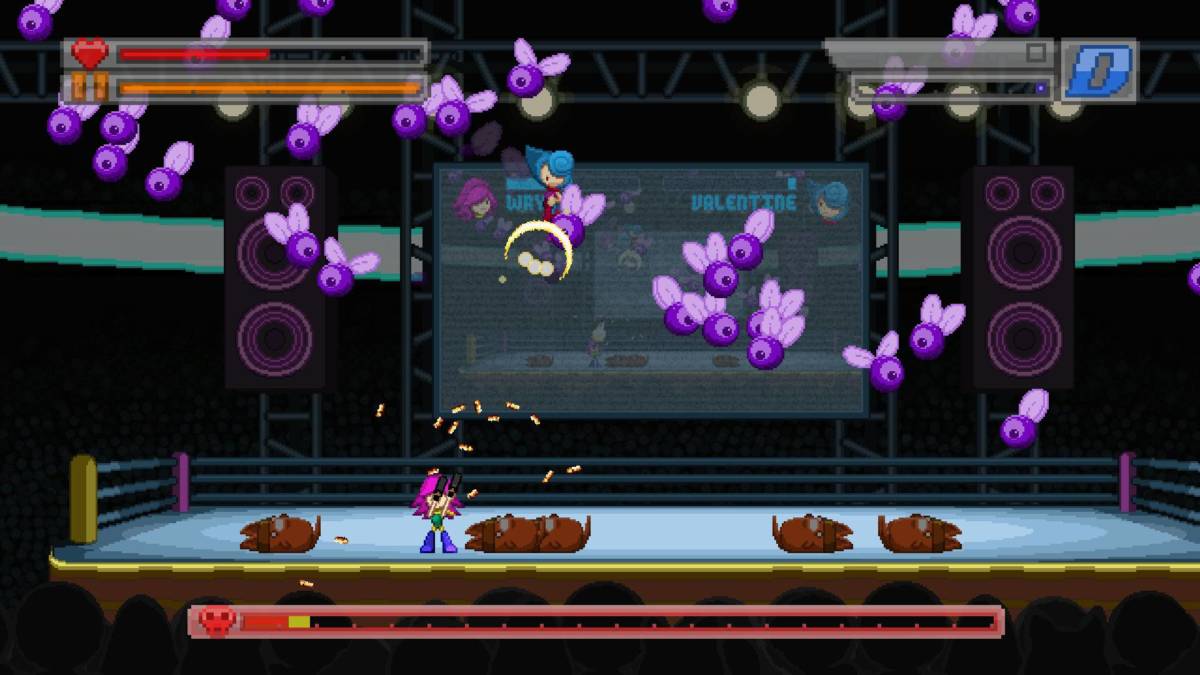 Bleed 2 does introduce something new over its predecessor, which is the inclusion of Endless Mode. Despite the name suggesting that the mode goes on forever, Endless Mode is a collection of 5 randomly generated levels, with enemies and threats from both the original game and this one, and the end of each level is punctuated by a boss fight. It’s an interesting addition, and one that allows for a nigh-on infinite amount of challenges, but it’s ultimately more of a novelty than anything truly substantial, which is also true for a lot of the game really.

Unless you’re willing to spend hours practising boss fights and levels over and over again to get the satisfaction that comes with finally conquering the hardest difficulty, Bleed 2 offers little in the way of replay value. Think of it like a rollercoaster: it’s fun the first time around, but on repeat visits, the ride loses its lustre.

Verdict
Though Bleed 2 does a lot to improve over the original, including new modes, characters and abilities, it unfortunately falls into many of the same pitfalls as its predecessor. Microtransactions: none.
7