Is Marvel’s Avengers’ Single-Player Worth It? 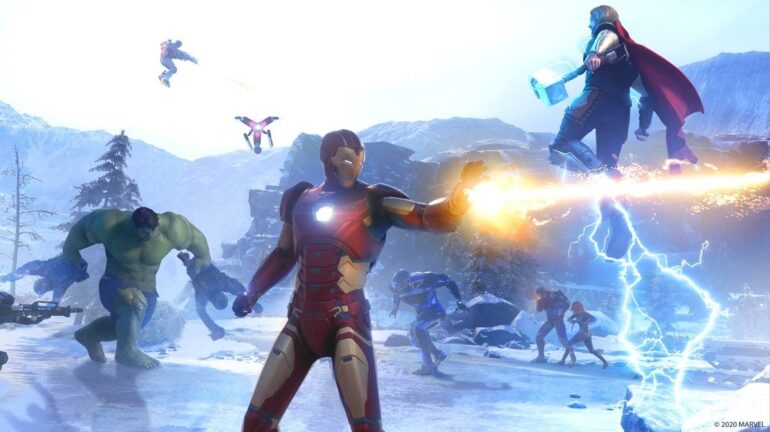 While the Marvel’s Avengers reviews are certainly polarised, there’s one thing that the critics can almost entirely agree on: it’s single-player campaign is the highlight of the whole package. But is it enough to make it worth a buy?

You’ve probably seen more than enough of the A-Day footage by know to understand the gist of Marvel’s Avengers in terms of story — I’ve seen it more than I’ve seen my own father in recent times. When the Avengers assemble to celebrate A-Day in San Francisco, a giant Terrigen explosion causes many deaths and some to even become “Inhumans”, which are basically the game’s equivalent of X-Men’s mutants.

Captain America is a casualty of the explosion and The Avengers themselves become pariahs, leading to them disbanding and the shady AIM assuming almost a dystopian level of power. Kamala Khan, an Inhuman who you play as during the calm before the storm during A-Day, is “gifted” powers that allow her to increase (or “embiggen”) in size and she takes it upon herself to discover what really went down that day.

The majority of the single-player campaign, which may take you up to 10 hours to complete, focuses on Kamala as she crosses paths with the fractured Avengers and seeks to put a stop to AIM. While she is the focal point of the story, you get the chance to play as each Avenger at various points over the course of the story. It’s a pretty good story, too.

Marvel’s Avengers’ plot isn’t anything new as far as superhero stories go, but it’s buoyed by some great performances from the likes of Troy Baker and Nolan North, though it’s Sandra Saad as Kamala who really brings the charm. She may not be to everyone’s taste, but Kamala offers a new insight into the world of the Avengers and has great chemistry with the rest of the team.

As for what you will be doing in the single-player campaign, it’s actually where you will be enjoying the most variety in the game overall with plenty of great setpieces. Chase sequences are aplenty, though there are some fantastic moments where you get to take Iron Man’s suit for a spin and square off with bosses, though these are unfortunately very scant. Compared to the multiplayer missions, however, which settle into a very predictable formula, the campaign might do more to keep you entertained throughout your time with the game.

However, you will, for the most part, be taking part in wave-based fights and trying to get to grips with the game’s many different systems — or blanking them entirely. The single-player has live service components like Power levels and Hero levels and about a million resources to collect to help acclimate you for Avengers Initiative, though you really can ignore these for the most part and play the game as a mostly straight brawler.

That brawling is actually pretty fun, despite it maybe getting repetitive for some. Each hero plays very differently, though each has the same satisfying heft to their hits, Thor in particular. Players can combine with their AI companions for big combos, though you can also occasionally team up with real players for certain missions if you so wish. You don’t have to engage in any of the multiplayer stuff if you don’t want to.

You can also play Avengers Initiative as a solo player if you want to, all of the missions giving you AI companions instead. While it might be trickier than normal as the AI isn’t what you would call reliable, you should still be able to get through some of the toughest missions without other players. Matchmaking is also quite spotty at this time of writing, so you may actually be better served diving in solo anyway.

There’s a lot more to the single-player than simply completing missions, too. Marvel’s Avengers has an absolutely absurd amount of collectables, from voice recordings to comics and all kinds of different skins, so completionists won’t be stuck for things to do once the credits roll. Adding to that, there’s only maybe one or two trophies/achievements for Marvel’s Avengers that will require multiplayer, meaning that solo players could feasibly earn a Platinum or full completion on their own.

As for the difficulty, I found that the game was plenty challenging enough on the default setting, it hitting that sweet spot between being hard and not a complete walkover with a few sequences actually being quite tricky. It seems that the AI enemies focus on you a lot more than your companions and there can be a few pretty cheap failures, though that’s when it’s worth experimenting with your playstyle and trying different things. You can even change the “build” of your character to make them better suited to different missions, but this honestly never feels compulsory for progress.

While Marvel’s Avengers may not offer as much solo fun as the recent Spider-Man game and has more than a few problems, it’s probably worth playing the single-player all the way through if you’re a Marvel fan or just enjoy fun brawlers. If, however, you’re a little put off by the current state of the game or aren’t fully convinced by the game in general, there’s no harm in waiting to slap down your $60/£50 — or maybe when it drops further in price than that.