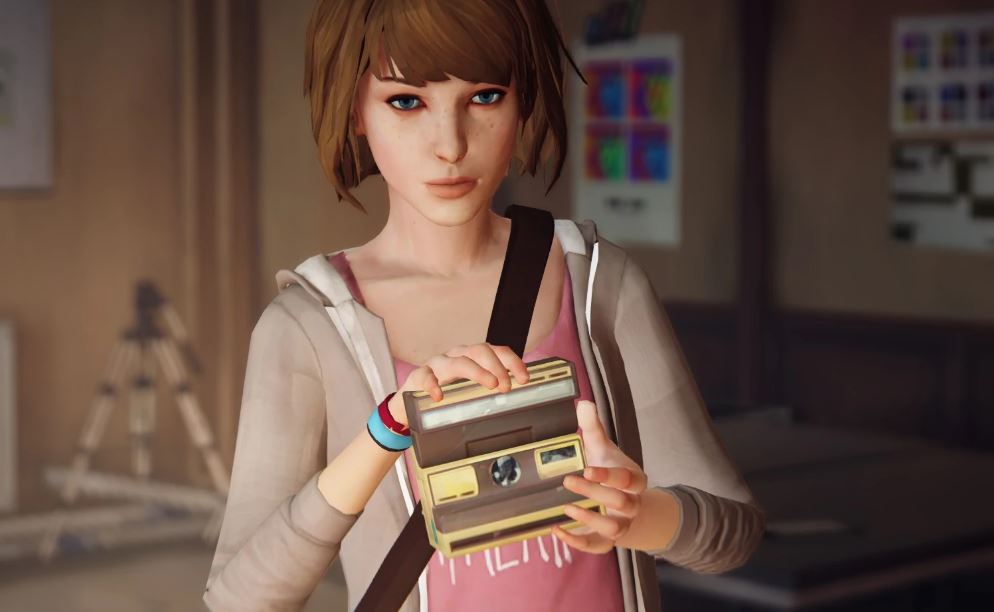 If all you did when Dontnod’s Life is Strange wrapped up in 2015 was look at the screenshots, you’d be forgiven for thinking the game’s adolescent aesthetic is adopted for its own sake. That it’s an excuse to swoon over French indie bands or small-town America in the fall, to talk about reading James Bradbury or Jack Kerouac because you think they make you look cool. That it’s some vague attempt, though not a cynical one, to lay claim to being the Juno of video games.

I mean, five minutes in, the game strikes you not with its profundity, but with its brazen pretentiousness. When we’re plopped into Max Caulfield’s shoes in episode one, Chrysalis, one of the first things we’re invited to do is take a photo, a selfie, with Max’s retro camera. Give it half an hour and you’re moodily walking around the school corridors listening to Syd Matters’ To All of You. It’s the platonic ideal of teenage life, a Morrissey simulator, a semi-self-aware act of indulgent, undeserved angst. It’s true of the dialogue, too, which is a country mile away from what any human being might call realistic. People in this game say ‘hella’ and ‘sick’ the same way anyone else would use verbs. It’s what 46 year old men think teenagers sound like, and it’s enough to make you want to burrow into your own stomach in embarrassment. We get, at first glance, the platonic ideal of adolescence, not its reality.

Having finished it, though, and having mulled it over in my weird little brain, I think Life is Strange is a little more than that. Not only does not only does that platonic ideal fall away in the face of gruesome cyber bullying, sexual assault and honest-to god murder, Life is Strange has found a way, a suitably strange way, of mechanising the state of teenage hood. A lot of that lies with the game’s central rewind mechanic.

When Telltale’s The Walking Dead gave you a dialogue choice, it did so with a tangible aplomb, a definable sense of finality. You were committed. You made a choice within a short space of time and, when you did, you had to see its consequences through. Life is Strange doesn’t do that. Every time you say something to a character or interact with them in any way, you can squeeze the left trigger, rewind time and try something different. That means that, when someone asks you a question you can play around with all three potential replies. You can prod at the limits of a character, toy with their responses, question and probe and fiddle around until you find the one you like best. It’s brilliant because, paradoxically, it amplifies the weight of your decisions.

There’s no chance to go ‘well, I’m committed now’ and move on when you make a decision you regret; you don’t have the room to put it on the mental back burner. Instead, you’re invited to rewind, to find out more, to take it slow, change your mind and really think about what it is you want to say. Driven by the gamer’s natural desire to win, win all the time, and win big, you’re invited to agonise, to mull over your decisions in the desperate, anxious hope of making the best one, even when you know it won’t matter. Just like a teenager would.

The game trains you to do that, too; the first puzzle is a question Max doesn’t know the answer to; her photography teacher singles her out for a kind of spontaneous quiz. When she answers wrong and a fellow student embarrasses her, she has to rewind time and answer again, this time flaunting her knowledge of French photography. These early interactions tell us that there is, almost, a ‘right’ answer to your every interaction, a means of satisfying your innate, completionist desire to have everyone treat you like a hero.

That’s when the game starts pulling the rug out from under your feet, presenting you with a series of questions to which there are no ‘right’, video gamey responses. In the middle of the game, in one of its many fractured timelines, it asks Max to euthanize your best friend whom, paralysed from the neck down, can’t do it herself. Do you do it? Do you really have the right to take someone else’s life? Or do you say no, and doom your friend to a hollower, but no less inevitable, end? You’ve been trained to find the right answer, to twiddle with the mechanics until perfection emerges from the undergrowth with the sonorous, satisfying *ping* of an Xbox achievement, and now it’s being denied.

Like your standard, moody teen, you’ve been groomed to expect an objective world, and you’re seeing it gradually stripped away.

It’s apt, because, well, 16 to 18 year olds have to make a lot of decisions, decisions which, it appears, will affect the course of their lives. “What do you want to do for your GCSE’s?” the world asks with a smile and, then, a year later it appears again: “College, Sixth Form or an Apprenticeship, what’ll it be?” it chimes. And then, at 17, it appears to whisper in your ear once more: “University?” it coos, “What are you doing and where? Here are six thousand choices, make sure you recognise what your passion is and go with that, yeah? Because, if you don’t, you’ll be aimless and miserable. Forever.”

The result is a tangled mess of nerves and uncertainties, impromptu shifts from accountancy to sociology and back again. Life is Strange replicates that agonising, anxious desire to get it right over, and over and over again. It fulfils a fundamental teenage desire; it lets you have control over time; gives you all the space you need to study, sleep, hang out with friends, and negotiate social embarrassment. It lets you think you can win, that you make everyone like you, make all the right decisions all the time and then, when it all actually matters, Life is Strange finally tells you that you can’t. There are no right answers, it says, you can rewind and restart and research all you want, nothing will make this perfect.

Life is Strange mingles that with something else entirely; this is a story about attempting to preserve a moment, an immediate narrative present, one at once on the cusp of monumental change and very far removed from it. When the game becomes dark, when all of the sexual assault, stalking, murder, torture and kidnapping kicks in, it’s tinged by a desperate, nostalgic drive to return the innocence of the opening act, no matter how cringe-worthy it might have been. More than that, the game is constantly inviting the player to sit down and take a breather. An extended (and frankly excruciating) stealth sequence through Max’s subconscious stops for a minute or six when we’re invited to stop and sit on a chair, somehow hidden from the sequence’s prowling enemies and let Max’s inner monologue take hold.

In the same way, episode three, Chaos Theory, freezes its narrative halfway through; Max and Chloe, having just woken up after a night spent sneaking through the school at night, looking for clues to further the plot, spend a few moments sat quietly next to each other in the morning, listening to music as the sunlight slants in through skewed blinds. The narrative has to move forward; Chloe has to get up and go to school, and the player has to continue the story, but they’re invited, for the moment, to procrastinate. To enjoy the moment for what it is and soak up the music. In the fast-paced, erratic world of video games, in a medium which seems always to be demanding some sort of trick, some sort of focus, some sort of immediate intellectual attention, this sort of moment is rare, and it captures something quintessentially adolescent. It grasps the sense that the future is at once far-away and imminent, at once in your control and far out of it, a drive to push ahead but a fear of what you might find; a narrative need to keep going clashing with an intense love of the present. You have to go, even with Max’s rewind powers, she has to let this moment end, but she does not have to do so now. It’s a strange sensation, a unique and universal one, and the game should be praised for capturing it so well.

There’s the conclusion, too, which does something rather different. Throughout the game, a storm seems to be building on the edge of the town; it’s afflicted by freak weather, birds dropping dead out of the sky, snow in July, and Max herself suffers from a recurring nightmare about a hurricane. When it hits in episode four, it destroys the entire town. After a lot of pondering, a lot of muddling about, reversing time and thinking about it, Max and Chloe learn that the storm is the result of Chloe’s survival, that she should have died in episode one, shot dead by another character, Nathan Prescott. To save the residents of Arcadia Bay, then, Max has to go back to the start of the game and let Chloe die the way fate dictates she should have. It links the near-world ending storm with Max’s Scooby Doo meddling in a wonderfully nebulous sort of way. Like Max’s powers themselves, the link is just accepted as fact, as a thing which exists, tying Max’s actions to forces neither she nor the player understands. That’s the perfect expression of a very strange teenage experience. It’s a narrative expression of a particular sensation, of the sense that you, the moody teen, can take on the world even as it mystifies and intimidates you.

All of that is important. It’s very important. Because it’s indicative of video games growing as a storytelling medium, of expanding out beyond the borders of the physical power fantasy. Life is Strange devotes itself to exploring an emotional experience, a period of time, both universal and unique for video games. It’s exploring something complex, nuanced and ambiguous, something difficult to define but always keenly felt. As consumers of media, as advocates for this medium, we should celebrate that.