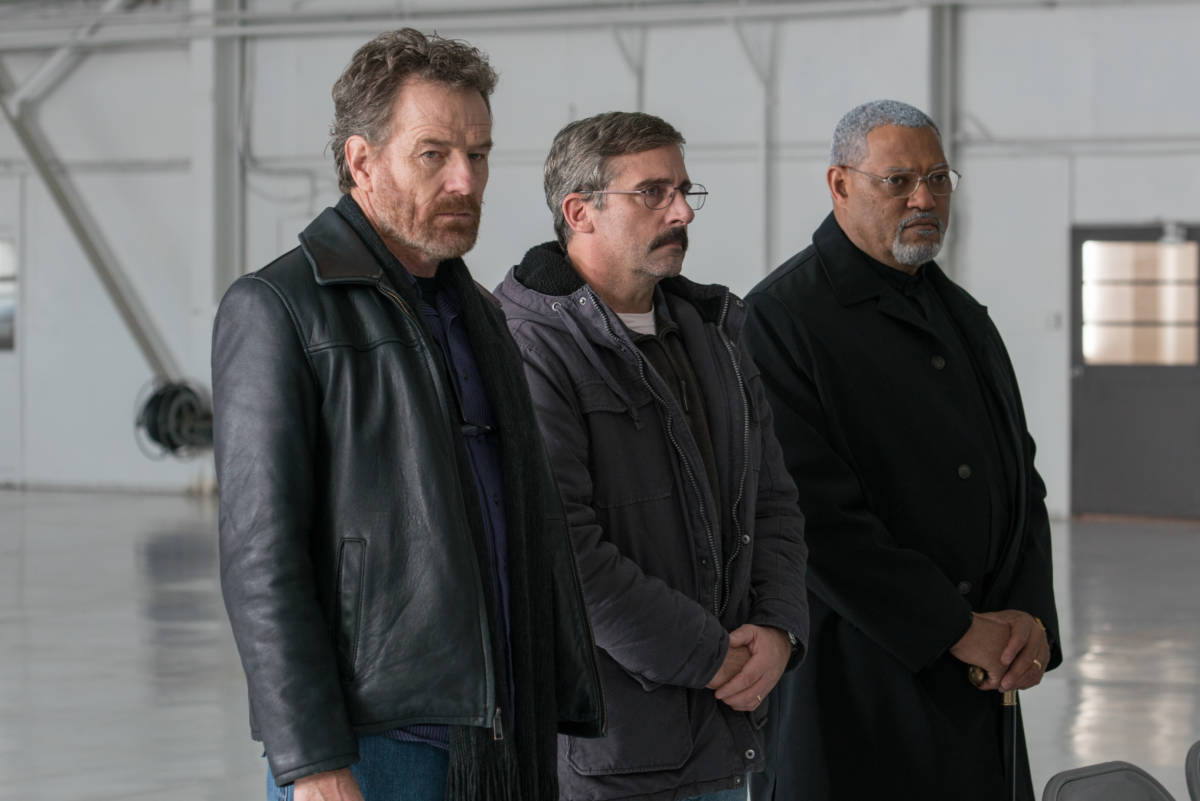 Last Flag Flying, the newest film from director Richard Linklater, is an emotional tale about three Vietnam War buddies on a mission to lay one of their sons to rest.

The film, based on a novel by Darryl Ponicsan, takes place after a year of fighting in the Iraq War era of 2003. Much credit goes to Linklater for waiting it out to make the film rather than do something in 2006 when the war was still much of a mess. While the book was a sequel to The Last Detail, the film has been reworked enough to no longer be considered a sequel.

Former Navy Corps medic Larry “Doc” Shepherd (Steve Carell) uses his son’s untimely funeral to reunite with two former Marines, Sal Nealon (Bryan Cranston) and Reverend Richard Mueller (Laurence Fishburne). A reunion quickly becomes a road trip for the three veterans as Doc doesn’t want to see his son, Larry Jr., buried at Arlington and that he’d rather be taken back home to New Hampshire. He can’t be blamed for not wanting to take a vacation to see his son and bury him at home.

The moment when the caskets appear on screen, it doesn’t matter how cinematographer Shane Kelly lit the scene or filmed or how the musical score played to emotionally heighten the scene – it was always going to hit hard on impact. It hits even harder when Colonel Willits (Yul Vazquez) consoles Doc and tells him that his son died a hero and should be buried in Arlington.

It’s on the way to New Hampshire when they decide to pay their respects to the mother of a fallen Vietnam comrade (Cicely Tyson). They feel the guilt for what happened and Doc ultimately took the fall for it.

Carell plays the role as straight as he ever has in his career. In the role of a father mourning his son, The Office star plays to the emotional side and it’s one of his best performances. It’s not the comedy type role that many would expect from him, but it’s a striking turn from his performance in Battle of the Sexes.

Cranston put in a heck of a performance earlier this year in Wakefield, but the Breaking Bad alumnus doesn’t play it over the top or phone it in here. It’s a top-notch role and he doesn’t do it a disservice either. People expect Carell to play it funny, but it’s Cranston who adds a lot of humor to the film as he disappears into the role.

Throw in Fishburne as Mueller and it’s just a wonderful vibe between the trio. It takes a road trip to quickly bring back “Mueller the Mauler” but when that happens, it’s goodbye reverend.

Musically, composer Graham Reynolds adds some Americana flavor to the film’s score. For a film where the mood continues to shift because of the drama, Reynolds does a solid job with finding the right mood for the cues with what’s happening on screen. There’s so many themes at play (road trip, dead son, friendship) so the music needs to be able to underscore or heighten the emotions just right. It’s almost as if Bob Dylan scored the movie.

There’s a lot of humor in Last Flag Flying, and that’s okay. The war veterans, who no doubt suffer from PTSD as a result of serving in Vietnam, use it as a crutch. Without the humor, there’s no doubt that many scenes would hit even harder from an emotional perspective, including the burial, and that’s where the film should have ended.

The grief may drive the movie but it’s the humor putting a personal touch on such a serious subject. The mixture makes Last Flag Flying a dark comedy rather than a straight drama, which should appeal to anyone who loves a good road trip film with old friends.

Amazon Studios and Lionsgate opened Last Flag Flying in New York and Los Angeles on November 3, 2017. The film will expand into more locations on November 10, 2017.