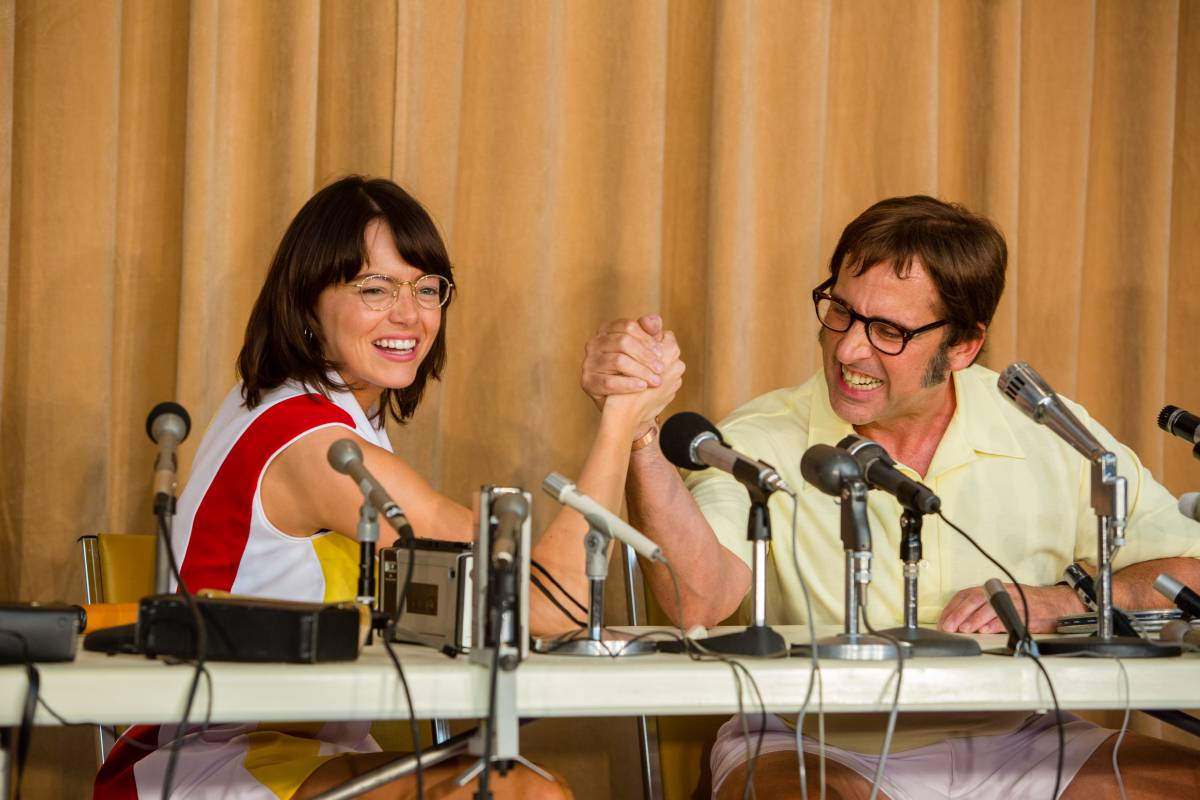 Battle of the Sexes could have taken the rivalry between Billie Jean King and Bobby Riggs to the next level, but Emma Stone and Steve Carell both deliver strong performances nonetheless.

It was 1973. The sexual revolution had just started.  The fight for women’s liberation was just beginning and in many ways, it’s not yet over as there’s still much work to be done. All eyes at the time were on a tennis match between women’s tennis champion Billie Jean King (Stone) and gambler Bobby Riggs (Carell). This match was billed as the Battle of the Sexes and this match was what dominated television viewing outside of those who were sitting there in the Houston Astrodome.

This was about more than the rivalry. As King fought hard for women’s equality, she was struggling with her sexuality. Despite being married to Larry King (Stowell), the tennis champion found herself attracted to hairdresser Marilyn Barnett (Riseborough) but this was also a time in which she could ruin her career if word got out. Ever the statesman, Larry kept her secret. Larry could have easily gone to the media, spill the beans, and ruin her career, but he didn’t. Both Larry and Marilyn knew all too well that tennis would be King’s one true love. King had no interest in battling Riggs but when he defeated Margaret Court (Jessica McNamee), King knew she had to rise up.

Riggs, a former champion of both Wimbledon and the US Open, was well past his prime but he challenged King to a match. If Riggs were in his prime today, he would be the type of athlete to be all over social media due to his egocentric personality. He came off as a chauvinist and sexist for that matter. Unfortunately for Riggs, his gambling didn’t sit well with his wife Priscilla (Shue) and it ruins his marriage to a degree.

Make no mistake that the acting performances are among the strongest in 2017 and Stone could easily go back to back in the leading actress category. Having never played tennis, Stone went through an intensive training program. Carell pulls off Riggs’ look although he could have just as easily been replaced by fellow Second City alumnus Mike Myers.  Beaufoy’s script, however, could have gone further on the sexism at play in the 1970s. This is a film that could have shown just how much has and hasn’t changed in the last 44 years, but there’s a lot to work with for a film that transcends multiple genres. Could Battle of the Sexes commented further on the social issues at stake? Yes.

If there’s one thing you take away from this film, it’s that the battle for equality isn’t over.  There’s still a gap between the genders as there’s no equal pay for equal work. There’s a battle for LGBTQ rights and this battle, which affects me strongly as a transgender woman, is one that may never be over.

Fox Searchlight opens Battle of the Sexes in limited release on September 22, 2017 before expanding nationwide.