Spartan training is the best training. 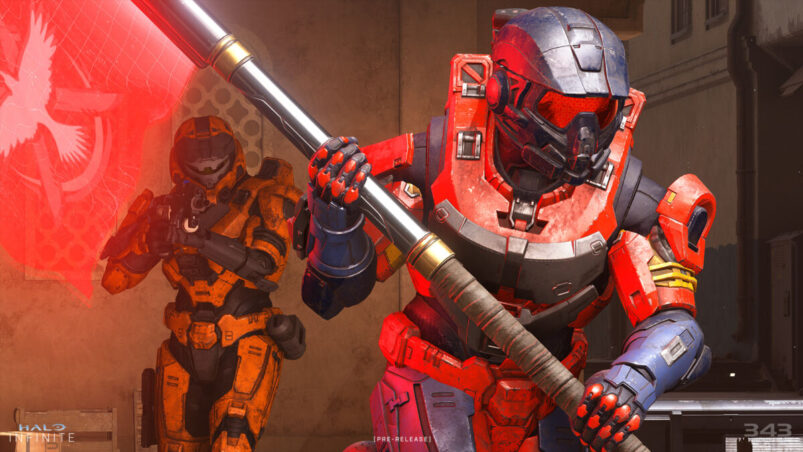 I’d love to sit here and give you a full impressions piece on the multiplayer in Halo Infinite, but the line between “this is bad” and “I’m bad” is invisible to me when evaluating a multiplayer game. I can conclusively tell you that the Battle Pass progression is slow-going, which sucks, and that the game could do with a Slayer-only playlist because there’s too many people who refuse to play objectives, but other than that, the process becomes muddy. Does the VK78 Commando need a damage buff? Is the time-to-kill a little too high given the increased amount of movement options at the player’s disposal, or do I need to get better at clicking heads?

I guess some things will remain a mystery.

While the gameplay of Halo Infinite is certainly stellar, the amount of weapons and the reliance on map knowledge to succeed can make the barrier to entry a little bit higher than other shooters on the market. If you don’t know how to control or navigate the map, or how to handle the power weapons when they come online, your chances of winning drastically go down. The numbers don’t lie, and they spell disaster for you, Spartan.

Thankfully, Halo Infinite has an onboarding process much better than most online first-person shooters, with an entire section called The Academy that’s dedicated to making sure new or returning Halo players are able to get to grips with the rigours of Halo Infinite. The initial tutorial is a decent start, and the weapon drills are a great way to mess around with the different guns and get a sense of their recoil, rate of fire and other options in preparation for taking your talents online.

However, Halo Infinite’s real crowning glory is simply Training Mode. Infinite offers a lot of options to practice your skills against A.I. bots, with Bot Bootcamp allowing you to group up with a team of random players, working together to dominate a team of bots. It’s a good mode, but the Training Mode far and away exceeds Bot Bootcamp to become Halo Infinite’s best feature, especially for a new player.

Halo Infinite’s Training Mode is a modular tool that allows players to jump into any of the game’s multiplayer maps, pick the weapons they want to use, and hop in against bots to gain some proper experience. Instead of playing normal bot games in Bot Bootcamp, where you’re still competing against other players and bots to use equipment and power weapons, the Training Mode gives you all the tools you need to train at your own pace.

Given the range of weapons and equipment that Halo Infinite offers, it’s hard to escape the feeling that you never get enough time to use the top-tier weapons in actual matches. Loading up Training Mode to give yourself an infinite ammo Sniper Rifle or get to grips with the new weapons from The Banished faction is sure to make life much easier for those looking to experience Halo for the first time.

Using Training Mode also gives you control over how hard you want the bots to be, or how many you want to face off against. Running a 4v1 against bots feels like better training for keeping your head on a swivel instead of getting rolled in matchmaking, and you can even change the difficulty of the bots to give yourself more or less of a challenge. Those Spartan level bots aren’t a joke.

There’s something to be said about an online FPS that offers a training mode beyond just target practice. Halo Infinite offers that too with the Weapon Drills, but there’s a value in targets that shoot back, and Infinite’s bots can be tough if they’ve got powerful weapons. All too often, bot matches in multiplayer games feel like a stomping ground of little value. Aside from the occasional bit of map knowledge, there’s nothing to be gained from stomping bots into dust for a few matches. With Training Mode, the tools are in your hands to learn precisely what you want from the bots, making it a more rewarding experience.

If anything, Infinite’s Training Mode feels closely similar to the training modes offered in fighting games, with the player being given complete control over how they want to learn the game against A.I. opponents that are as easy or as hard as you require them to be. It’s not quite a substitute for the real deal, as human players have a certain ingenuity that A.I. opponents lack, but it’s a fantastic start.

That’s the main takeaway from Halo Infinite’s Training Mode: it’s a start. So many multiplayer shooters are content with chucking players into the deep end and not caring whether or not you sink or swim. As far as they’re concerned, you’ve already paid and played, so their metrics are fine. Halo Infinite at least makes an attempt to ensure you’re prepared enough for those first few matches to make your experience more pleasant as a result.