Half-Life: Alyx, As Seen On Twitch

Valve's long-awaited new Half-Life is a whole different way of experiencing games, in more ways than one. 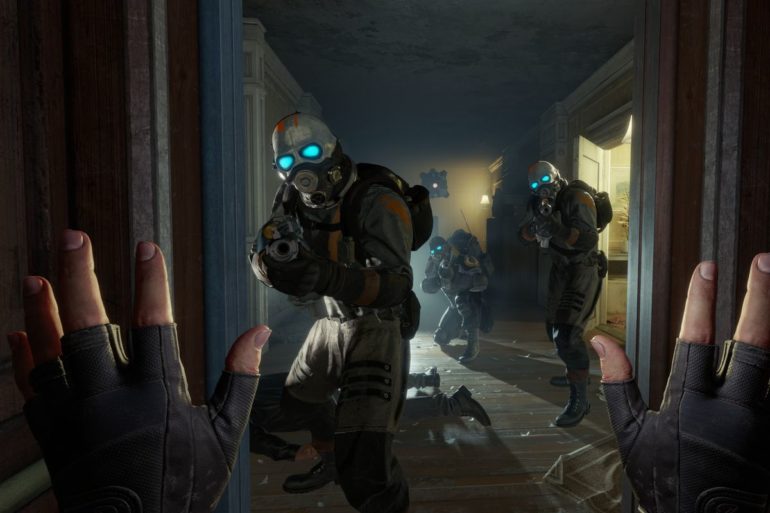 When Half-Life 2 came out sixteen years ago, it was a revolution – in level design, in storytelling, but perhaps most of all the physics engine. It was one of the first first-person shooters to let you screw around with physics objects and chuck bits of detritus around, even integrating this into the puzzles – and of course letting you stack up explosive barrels and see what happens. But now, in the light of Half-Life: Alyx, which lets you do that with your own hands rather than a mouse and a button, in retrospect it feels like a dry run.

This isn’t limited to the gameplay. City 17 is so much more richly drawn and rendered in Alyx as opposed to 2 that looking back, its original outing seems like an unfinished, unpolished beta version. Given that Alyx is a prequel of sorts, it’s as if the Combine had sucked a lot of the life and movement out of the world by the time 2 rolled around.

Let me preface this all by saying I haven’t played Alyx personally. This, in fact, is my broad thrust here, that VR gaming as a whole and Alyx in particular simply isn’t as accessible to a mass audience. There are two reasons for this: one, the cost of the additional hardware on top of the game itself. A video comparing the options puts the lowest end of the spectrum at 500 dollars American, and concludes that this cheapest setup isn’t up to snuff for Alyx’s requirements. And two, the physical space in the room required to wave your arms around in virtual reality without breaking something.

Both of these count me out. My chuntering old rig can just about run the copy of Watch Dogs they’re giving away free at the moment – a game from 2014 – and, like most people under quarantine, my house is currently crammed to bursting with family-size boxes of the survival essentials: toilet paper, cigarettes, and 9mm parabellum. A lot of potential players are likely in the same boat, and even those willing to run out to grab a lot of expensive hardware will end up butting their heads against pandemic-related store closures.

So my experience of Alyx – and this will be the case for a lot of people – is entirely via game vloggers. Many of whom will already have a VR setup from streaming stuff like Superhot, and can recoup some of the costs of it by now streaming Alyx (it’s the circle of life, etc). On its day of release, Alyx had around 43,000 actual players – but six times that number watching the show going down on Twitch.

VR has been knocking about on the periphery of gaming since the early ‘90s, but has always had those same barriers to entry – and, in those early days, didn’t really work, making most users helplessly nauseated. More to the point, any VR games were similarly peripheral. Even stuff as recent as Superhot had the VR version as more of a sideshow than the main event. Alyx, by contrast, has the advantage of being the first entry in the Half-Life series since 2007, after a full decade of waiting, of Half-Life 3 passing from history into myth into legend – and it’s rolling with VR as its main delivery method.

I’m always wary of seriously calling things ‘unprecedented’, but it’s hard to think of any similar revolution in the way people play video games beyond the advent of home consoles. There was a wave of motion-sensitive technology in the mid-2000s, but typically these were side features at best, and almost all examples were coming from Nintendo, who have been notorious for trying out weird peripherals ever since the Lightgun and R.O.B. the robot . And the rise of touchscreens, by contrast, extended far beyond gaming, making far more of a mark in the world of smartphones and tablets.

While Alyx may be the first AAA VR game, it’s not the first game to have more watchers than it does players. ‘Twitch bait’ is already a well-recognised category of game, strange little boondoggles like Goat Simulator or Dream Daddy which were never seriously intended to be standalone things, but rather were meant to have some YouTube personality or other burbling over them and giving them a huge built-in audience from the off.

Alyx is far more polished and better-crafted than Goat Simulator, but is still uniquely well-suited for this. If you’re following a Twitch streamer, then you probably like them as a host – or at least can stand their personality enough to tolerate having them give you the experience of the game second-hand. Usually your exposure to the host is, at most, having their head blathering away in the bottom corner. In VR, however, you don’t just see through their eyes, but also have their head and hand movements, their Romance language-style gesturing to go along with their narration. There is, bluntly, more of a sense of their personality than you get simply hearing PewDiePie screech and hoot over the top of it.

Experienced in this way, gaming becomes a curated experience, more along the lines of a traditional TV programme with a host whose personality can do a lot of the work in carrying the show. It should be said, though, as games go Half-Life was already a relatively curated experience. It’s not a free-roamer like Minecraft or Grand Theft Auto – like a lot of first-person-shooters, it’s essentially you walking along a corridor covered in all kinds of exciting window-dressing from one plot point to the next, all while blowing people apart.

Unlike the semi-annual Call of Duties, though, here the shooty-shooty-bang-bang-gun stuff isn’t the whole point. In a sci-fi like this, the window-dressing plays a much bigger role, especially as world-building. Half-Life 2 itself had the particularly dramatic detail of the sea levels being far lower than they clearly had once been, illustrating what the Combine were doing to Earth without having to say it out loud. The most memorable part, though, was all those grim post-Soviet cityscapes that had been crudely Combine-ified – and the VR format puts you right there in the thick of it in quite a real, visceral sense.

In this regard, whether you see it through your VR goggles, or those of Videogamebastard666, doesn’t matter quite so much. Simply wandering through the game world and seeing what it’s like doesn’t strictly need you to be at the helm – although here choosing a good host comes into play again. You’ll want a host who focuses on the things you’re interested in, rather than one who sprints through the levels while constantly spinning around in circles.

Give the streamers their due, some of them are well aware of the barriers to entry, and their running commentary becomes as much about the practicalities of VR gaming as it is about Alyx itself. Some things never change – by all accounts it can still be incredibly disorientating until you get used to it, and Valve have been quite canny by including a few different ways to move around the virtual world, so most people will be able to find one that doesn’t actually make them want to throw up.

There is of course a world of difference between seeing a game being played and playing it yourself, even without a whole new kind of controller. Still, you can get a rough idea of what it’s like, and what’s striking is how streamlined it is manipulating the physics objects. This is clearly Valve having tinkered out the right margins of error needed to make it reliably playable. In games like Hand Simulator and Surgeon Simulator, which even without the goggles were striving toward VR in a similar way, this was always incredibly fiddly and precise. As Twitch bait, this became part of the appeal, witnessing the farce of the host flailing around, trying helplessly to keep hold of what they needed to perform a heart transplant, or load a pistol. Alyx makes at least the latter far smoother.

Jeremy Bentham’s hypothetical prison design, the Panopticon, in which a single guard at the centre could be watching any prisoner at any time, is the kind of ‘whoa, man’ idea so beloved of undergraduates that it’s now a bit trite. But with the rise of online personalities, social media influencers, and game vloggers in particular, something like the opposite is true – one person, at the centre, may find to their surprise that they are being watched by everyone else, all sealed off in their own little pods.

As recently as a few weeks ago, that analogy might have been edging into the self-indulgent. Now, with huge swathes of the population confining themselves to their houses and limiting their exposure to the outside world, it rings uncomfortably true. You’ll have seen some of those viral videos, like the one from Spain where a guy stands in the middle of some housing blocks, leading an exercise class, as people look on from their balconies. One person at the centre, everyone else watching – between that and how Alyx is currently being experienced, there exists only a difference of degree.

This isn’t to say, though, that actually playing Alyx will forever be reserved for those with a Twitch following and with too much cash to burn. Computers are getting more powerful, and the VR headsets and paddles will get cheaper as time goes by, as new hardware inevitably does. And it’s Alyx specifically which has opened the doors for this: even before release it was being cited as VR’s ‘killer app’. But as more innovations keep coming out, this dynamic – of having to watch some e-celeb play with all the new toys before you can get them yourself – is unlikely to disappear.