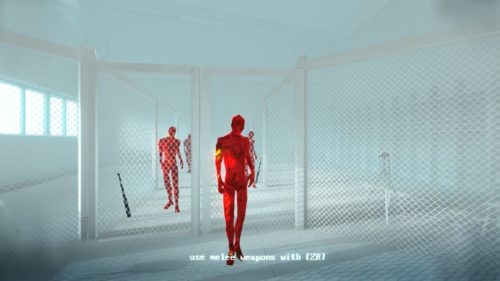 Some games prove that violence is almost an art in of itself. Hotline Miami is akin to a ballet of bullets and baseball bats, while Mortal Kombat proves how creative (sorry, kreative) people can get when they have to think of different ways to de-spine people over many decades. Superhot, which is now finally on Switch, is like a slowly moving chess board where the only pieces are pawns and it’s your job to checkmate them as stylishly as possible.

Superhot is a superbly innovative shooter with a classic tagline that’s actually a bit of a lie. “Time moves only when you move”, yet the red guys within the confines of the game-within-a-game do in fact move, just very slowly. Time speeds up drastically whenever you make any significant movement or use your weapon, less so when you ready your aim. You have to think about all the little pieces for every action, what taking a particular shot might do to the rest of the “scene”.

The only enemies you face in Superhot are red guys, who die in a single shot and aren’t too tricky on their own. The problem is: so do you. As soon as you’ve dispatched one enemy, it’s on to the next, figuring out how you can leap and slash your way out of danger, almost pirouetting through bullet fire as you go. There are few more enthralling experiences in FPS games than shimmying in and out of rifle fire, only to plunge a katana into your attacker before turning their weapon against their friends.

You start most levels in Superhot with just your fists — the aim is to dodge attacks and then steal your opponents’ guns for your own machinations. There’s only a small arsenal of firepower at your disposal in Superhot, the pistol probably getting the most use with the shotgun being the most outright fun to use. The variety is extended by the amount of objects in your environment that you can use, a level featuring a pool table allowing you throw balls at your enemies to temporarily incapacitate them. Superhot is all about freeing, expressive violence, and it’s all told through a surprisingly gripping narrative. 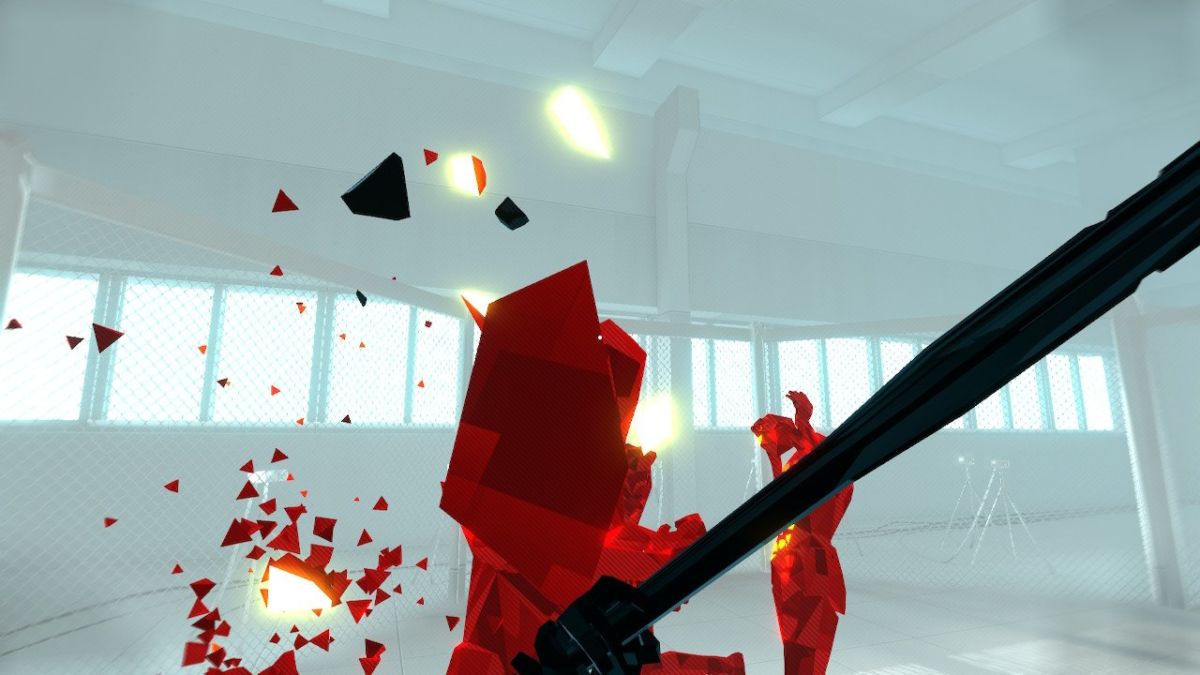 Having previously played the campaign on the Xbox One and PC (as well as the VR equivalent on PSVR), I still found myself getting drawn in by Superhot’s Black Mirror-esque tale, so much so that I would love to see it turned into a movie or some other adaptation. To say more than the basics would be to give it away, but this tale of a man who becomes obsessed with a mysterious game is deliciously meta and brimming with hair-bristling prescience. Superhot is the most innovative shooter in years for more reasons than its gameplay.

Unfortunately, it’s over rather swiftly, clocking in at roughly one or two hours to complete depending on how quickly you can learn from mistakes. It zips along, taking you from its innocent beginnings to its concluding level that doesn’t exactly feel like so. That said, there’s a great range of levels throughout with different obstacles standing in your way. One throws you immediately into the thick of it with a car speeding your way, leading you to immediately jump over it to then take on all comers in a car park. Another (and probably the most difficult) stuffs you into an elevator with three bad guys with guns and barely an inch of room for error. 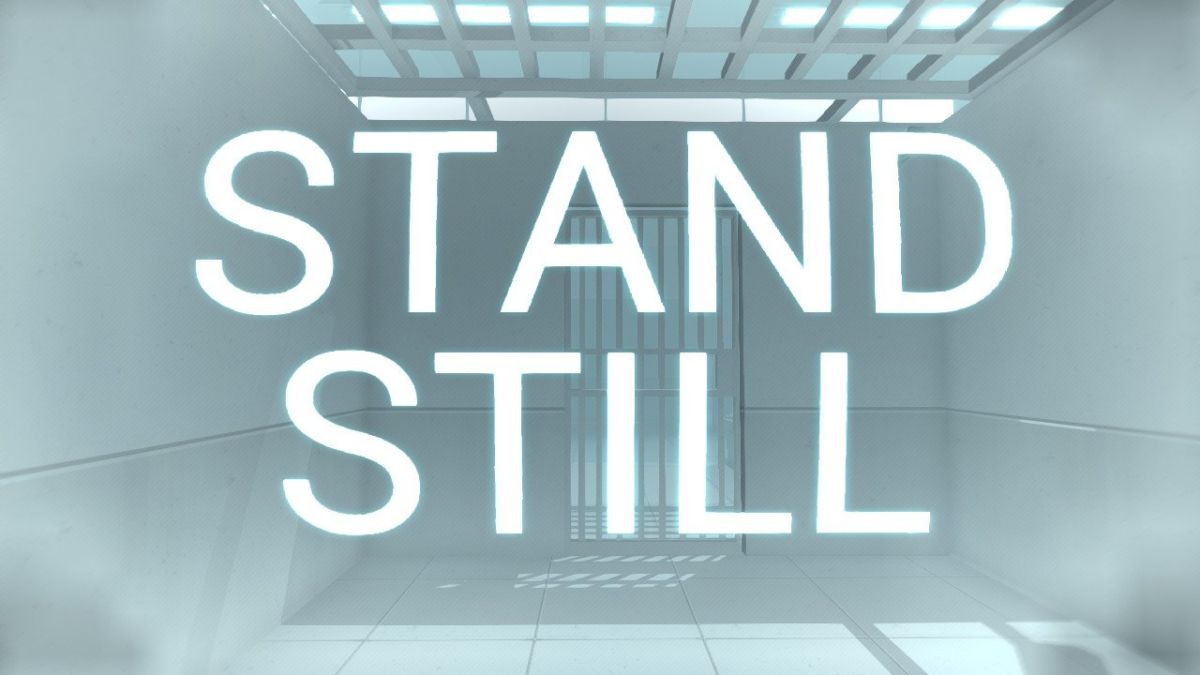 Late into the campaign, you earn the ability to “hotswitch” into enemies, which is as exactly as cool as it sounds. With a simple press of X, you can take over a red guy, leaving your previous body to go all Scanners and their head to explode. This brings yet another level of tactical ingenuity, a preferred tactic of mine being to throw a weapon at an enemy, hotswitch into them, and then pluck the gun out of the air. It never stops being fun for me, no matter how many times I pull it off or the amount of platforms I play Superhot on.

Once you’ve dusted off the campaign, Superhot is still only just getting started with your success unlocking Endless mode and Challenges. I can personally see myself playing Endless for dozens of hours yet, it throwing hordes of red guys my way as I dispatch them one after the other in search of a high score. This is Superhot in its most concentrated, purely fun form, and may be the way I spend long journeys from now on. Challenges, meanwhile, offer fun variations on the story’s levels, them giving you tasks like completing it using only a katana or by speedrunning as quickly as possible. 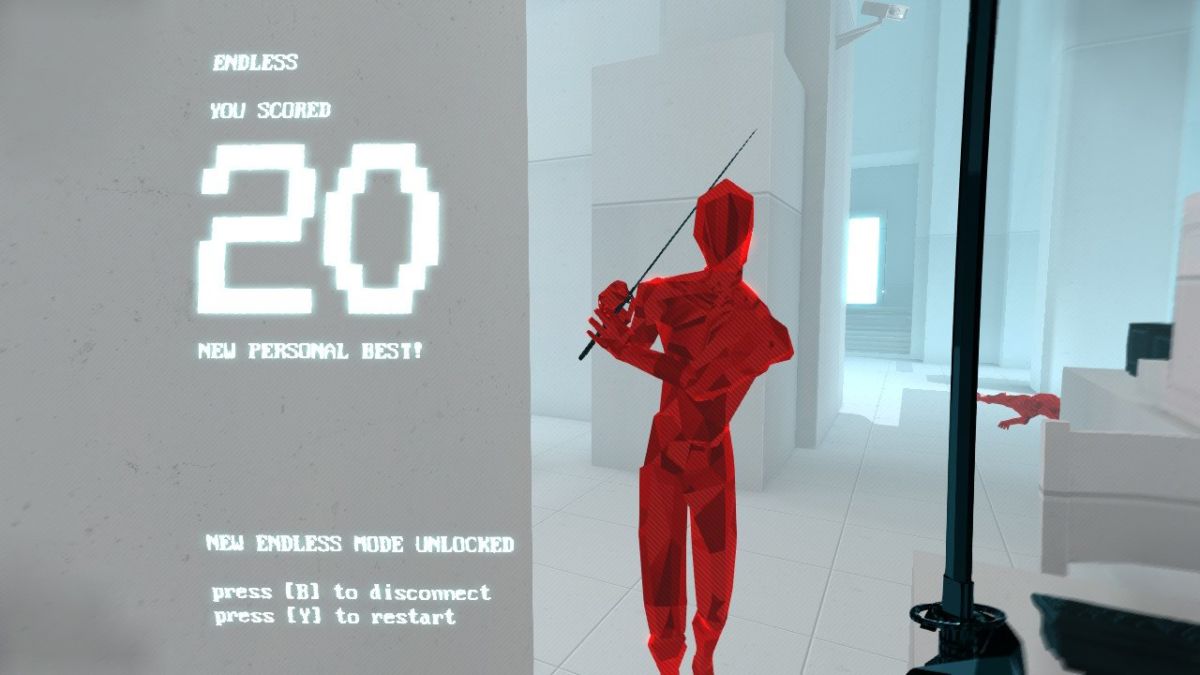 As for the conversion to Switch itself, Superhot’s low-poly, simplistic style translates to a great port that comfortably runs at the advertised 60fps with barely any hitches to speak of. There is perhaps a bit too much loading at times if you’re itching to play, though never enough to suck you out of the experience. On a similar note, the gyroscopic controls are a neat touch, allowing you to use the right Joy-Con to aim, meaning you can, in a sense, experience a condensed version of the VR version minus the headset. I couldn’t personally vibe with the gyro controls, but it’s a simple case of holding down ‘-‘ to switch in and out to allow for even more experimentation. I played mostly handheld with a Pro Controller, the nubs of the Joy-Cons just slightly lacking the fine accuracy I needed, though they still weren’t a bad option.

Superhot on Switch is a superb conversion of one of the best FPS games ever made, once again proving the versatility of the Switch and just how inherently fun it is to bully red guys, no matter the platform.