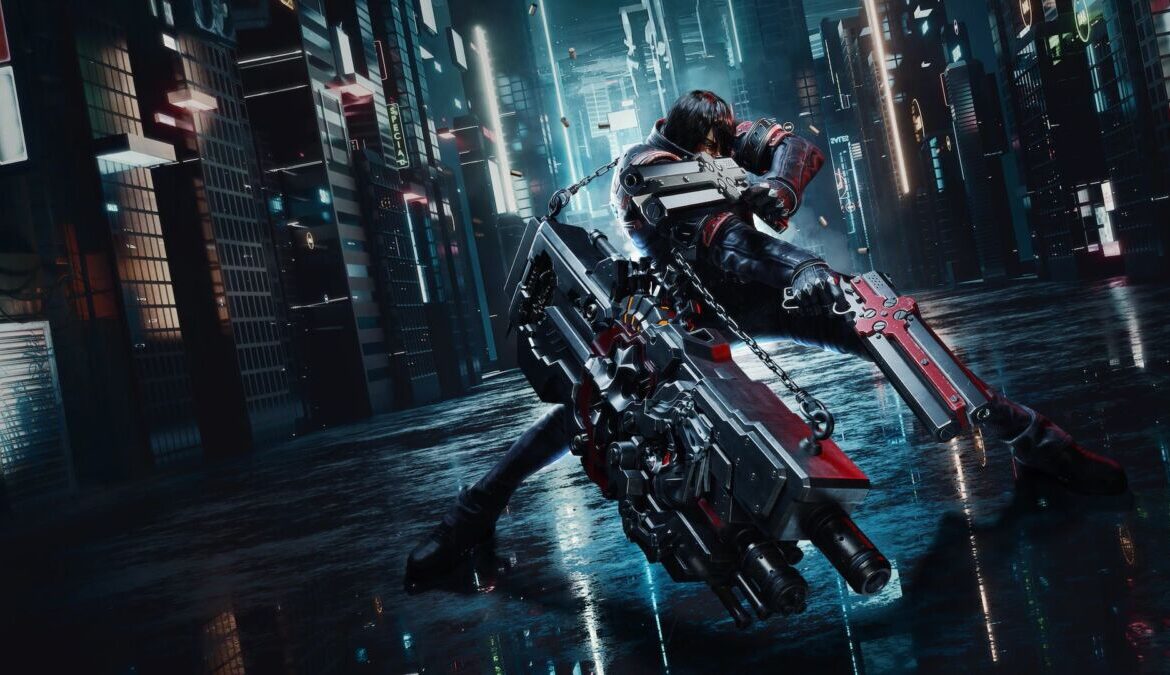 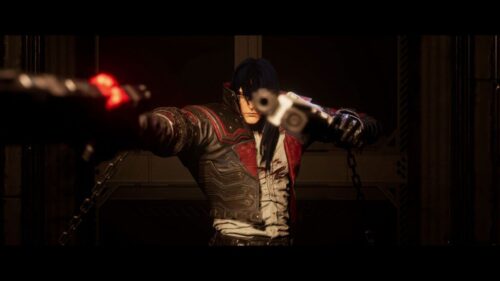 Some people may remember Gungrave from the PS2 games, or even the anime, like how I first discovered the property, but it’s hard to say the series is truly popular. Still, it seems like a new game pops up every several years, reviving the decaying body. Gungrave G.O.R.E is another example of a game that seems easy to get right on paper, a fresh fast-paced shooter to keep the franchise’s name alive, but much like its main character, a re-animated corpse can only be given so much life.

The story of Grave – excuse me, he likes to be called Beyond the Grave – has not changed much and all anyone needs to know is that the guns are loaded. Thankfully, there is no need to have played the previous games or seen the anime, but that doesn’t mean I’m not recommending them. Gungrave G.O.R.E. features a recap video (text and images with no voiceover, so get ready for over eight minutes of reading) for any new players who think they may need some motivation to shoot everything in sight, but it’s hard to imagine anyone getting too confused as long as it’s clear where the trigger is.

The short of it is that there was once a man who worked as a hired killer for the mob, Brandon Heat, who is truly as edgy as that name makes him sound. After being murdered by a close friend, he became much cooler when they used “Necro-technology” on Brandon, gave him two guns (collectively known as Cerberus), and a coffin weapon called Death Hauler that’s strapped to his back. It’s very anime. In this new adventure, Gungrave G.O.R.E, it’s all about taking down the drug empire run by the Raven Clan, and if anyone needs more reason than that to bust some caps, you’re just not dedicated enough to saving Scumland.

Gungrave’s gameplay is simple with bells and whistles added on top to fake being interesting. It seems a little exciting at first, because there’s always something happening, and there’s never a reason not to be pulling the trigger.

Little aiming is needed, and there’s unlimited ammo, so you don’t have to stop firing if someone other than you is on screen. Some slight dodging is just a suggestion, whereas repelling missiles (which I learned the hard way must be done while perfectly still) is necessary. Grave also has special attacks that are based on building up combos or meters for when things get hairy. Otherwise, there’s no need to switch tactics unless the shields go down. My biggest gripe is with the melee, which interrupts the flow of gameplay and could do with being more fluid in order to be effective as a basic attack.

In a lot of ways, G.O.R.E feels like the slightest evolution from the 2004 game (Gungrave: Overdose), but saying it evolved at all seems generous. This type of combat will feel repetitive pretty quickly, especially for some, but it doesn’t mean that it won’t be entertaining for a while at least.

There are upgrades to make players feel a bit more engaged, and there’s no denying that satisfying, violence-quenching tingle that comes from hitting a new room and simply executing everything that moves. Bosses are excellent diversions, as even when they’re slow to take down, the fights still feel energetic. Standard enemies are dull, however, with no good middle ground, as they go from lemmings who stand around and fire lazily or act as practice dummies to irritations real quick, aggressively trapping players, knocking them down holes, or causing quick deaths that ramp up the frustration levels.

The difficulty comes across as uneven, where it’s less challenging and more about situational awareness-based survivability. Putting the game on ‘easy’ doesn’t change much, just how many bullets it might take to get through an area, and some of the things expected of the player – like the train level – are going to be frustrating no matter what. Whether it’s a timer, needless obstacles, or hard-to-dodge attacks that come from nowhere and knock the player into a deep chasm, the later levels provide their own built-in frustrations.

Everything looks designed to keep the flow going, and make sure the killing never stops. In that regard, many stages don’t overstay their welcome, but after a while, it’ll all start feeling the same. Level aesthetics will grow tiring and they are not necessarily designed well when it comes to interactions and spatial awareness, especially regarding environmental obstacles, enemy placement, and having a suitable playground to battle that isn’t just a flat surface or tight corridors. The genuine moments of feeling badass and doing cool things aren’t spread out enough against these mild irritations.

Visually, there are some interesting design choices. Characters shine the most, and some of the cutscenes and small level details show a morbid metropolis of the future that begs for more attention, so it’s sad that isn’t translated more into the majority of levels. The world-building isn’t enough, because the initial exhilaration with that wears off and some of the presentation just isn’t on the same level, with certain elements not looking as crisp, or lagging behind in quality, even though the game performs decently.

Beyond that, there are also very few settings to play with, no real accessibility options other than standard subtitles, and it’s one of those games on PS5 that uses the speaker on the controller way too much. More importantly, Gungrave G.O.R.E has extra playable characters and alternate costumes, but what it really needed was some other mode, co-op, or anything else to help with the replay value. The game tells players to “Kick their asses,” but there’s only so much energy for that and I can’t imagine anyone going through this more than twice.

One of my biggest gripes with the game, however, is that Gungrave G.O.R.E stands for Grave of REsurrection and I truly feel this is a horrible act of violence committed on words.

Gungrave G.O.R.E is an okay attempt at an update that feels so close to the experience I had back on the PS2. I understand the old adage of if it isn’t broken, don’t fix it, but there’s a reason this industry rewards innovation so heavily. After a while, the newness and edge is going to wear off, making it harder to pick up the controller again and keep going. Much like Grave’s resurrection, continuing the game will be a personal journey based on how much someone is enjoying their time with it, but it’s hard to imagine that this project will extend the franchise’s afterlife by much.

A code for Gungrave G.O.R.E was provided by PR for the purposes of this review. 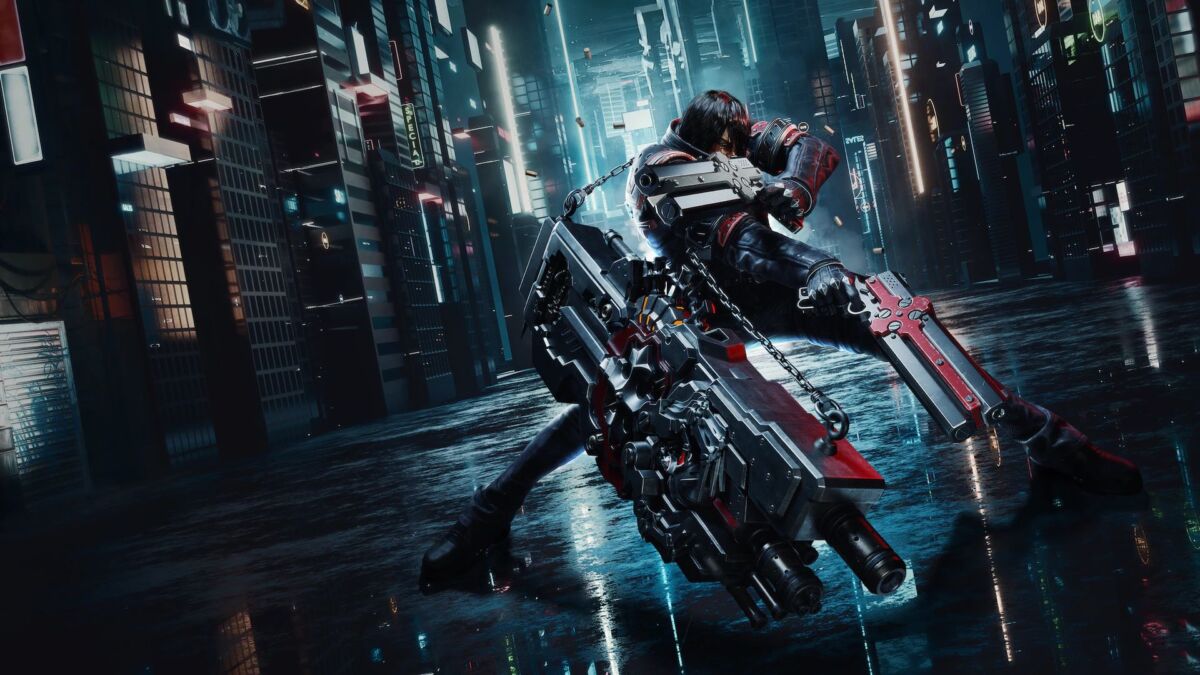 Verdict
Gungrave G.O.R.E is resurrecting a franchise, but it’s mindless bullet-slinging fun that has its problems and may not hold everyone’s attention.
6
Cultured Vultures is a pop culture website established in 2013 covering all things gaming, movies, and more. We eat your words.
All The News On The Biggest Games