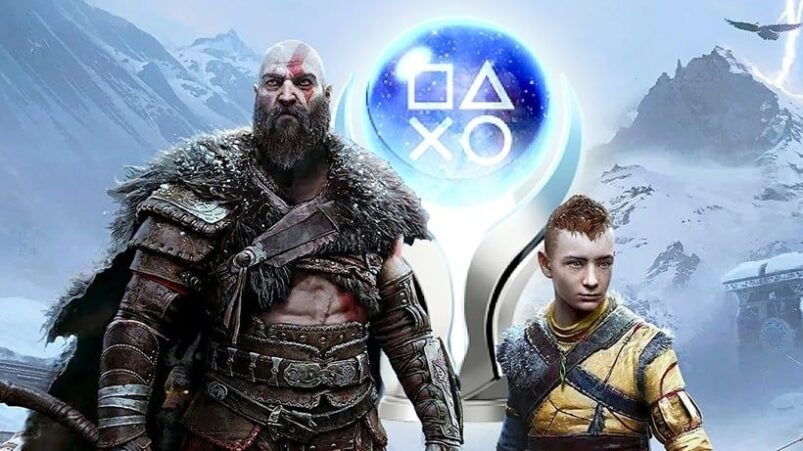 One of the most satisfying things about playing through God of War Ragnarok is collecting all of the trophies on this PlayStation exclusive. There are 36 trophies to collect in total. Some range from finding all collectible items to defeating bosses. The easiest way to achieve all trophies is by completing the story first to check off those that naturally are achieved in this process. Nothing is missable as you can return to any area in God of War Ragnarok after the story is complete in order to tidy up the remaining trophies. Here’s our God of War Ragnarok trophy guide to help you get that Platinum.

The Bear and the Wolf – Collect all trophies

The Florist –  Collect one flower from each of the nine realms. This is awarded naturally for completing the favour: Nine Realms in Bloom.

The Librarian  – Collect all of the books. This is naturally awarded while finding all artifacts for the curator trophy. Find all 13 of Kvasir’s Poems in order to get The Librarian trophy, including the The Last of Us easter egg.

The Curator – This is rewarded for finding all 38 artifacts and completing the Casualties of War favour in the Crater area of Vanaheim. These favours count as artifacts too.

How it Started – Equip an enchantment. This automatic trophy cannot be missed as it is story-related and unlocks during The Reckoning quest after defeating Nidhogg. At this point, you unlock an amulet which forces a tutorial and the trophy is awarded.

Spit Shine – Upgrade one piece of armor. Entering any blacksmith shop to upgrade an armour piece will award this trophy.

Spartan Ways – Remember the Spartan teachings. This is another story-related trophy that cannot be missed. At the beginning of Reunion, Kratos will know all types of Spartan Rage and the trophy will be awarded.

Full Belly – This is a reward for opening all 35 Nornir chests. Each chest contains either an Apple or Horn. They aren’t fixed to specific chests, but alternate as you progress through.

Knock Off the Rust – Purchase a skill. Pressing the touchpad to enter the skills menu before purchasing any skill, which costs XP, will award this trophy.

A Grizzly Encounter – Battle the bear. This is another story-related trophy that cannot be missed. Fight the big bear, Bjorn, to unlock the trophy during the Surviving Fimbulwinter quest.

Blood Debt – Battle the God of Thunder. This is another automatic trophy that cannot be missed whilst progressing the story. After fighting Thor, this trophy is unlocked.

Backyard Brawl – Battle the Mysterious Valkyrie. This is a story-related trophy that is unlocked after defeating the fourth boss, Vanadis. It is awarded at the beginning of The Reckoning.

Root of the Problem – Battle Nidhogg. Another story trophy, the Backyard Brawl is awarded after fighting Nidhogg during The Reckoning.

The Cauldron – Destroy Gryla‘s cauldron. Another story trophy awarded after defeating Gryla in The Lost Sanctuary.

Off the Leash – After battling Garm, this story-related trophy will be unlocked. It cannot be missed.

Comeuppance – Battle Heimdall. This is a trophy for fighting the seventh boss in the game and cannot be missed. It’ll be unlocked during the Reunion quest.

Phalanx – Obtain all shields. Getting all five shields will unlock this trophy. Three can be crafted at the blacksmith, one is unlocked during the game’s story and one is from a legendary chest immediately after the Garm fight. If you forget to pick it up, it will be added to the blacksmith shop and can be bought for 7500 Hacksilver. You cannot return to that area of the game after the story, but this trophy is unmissable due to it being added to the shop.

Collector – Obtain all Relics and Sword Hilts. This is a reward for getting all 14 Relics (or Hilts). You can check how many you’ve got so far in the weapons menu and navigating to relic. These also unlock special abilities.

Dragon Slayer – Craft the Dragon Scaled armor set. This set becomes available for crafting at the blacksmith after completing your first Dragon Hunt favour in Vanaheim. The set consists of three pieces which require Dragon Materials to craft and include a breastplate, bracers and girdle.

How it’s Going – Fully repair the Amulet of Yggdrasil. This becomes available in The Reckoning after defeating Nidhogg. Repair all nine slots of it at the blacksmith. Repairing a slot requires one Jewel of Yggdrasil but two slots are unlocked from the start. The jewels are found in Legendary Chests.

Funeral for a Friend – Attend the funeral. Complete the favour A Viking Funeral – this can only be done once the story is complete.

Rebel Leader – Return the Hammer of the Rebellion. Complete the favour Spirit of Rebellion in Svartalfheim. This is only available after the story is complete.

New Friends – Fetch Lunda’s orb. A reward for completing the favour A Mysterious Orb in Vanaheim.

Full Gufa –  Free the Hafgufas. This is a reward for completing the favours Secret of the Sands and Song of the Sands in Alfheim. You can only do this once the story is complete.

Making Amends – Free the Lyngbakr. This is a reward for completing the Weight of Chains favour in Lyngbakr Island.

It Was a Good Day – Retrieve Mardoll. This is a reward for completing the Freya’s Missing Peace favour in Vanaheim.

Invasive Species – Complete all of the Crater Hunts. There are nine of these that take place in the Crater in north Vanaheim. They are made up of Dragon Hunts and Epic Hunts which count as favours.

Rightful Place – Return all the Lindwyrms to Ratatoskr. Complete the favour The Lost Lindwyrms to unlock this trophy. It starts at Sindri’s House.

Pure of Hart – Return the Stags of the Four Seasons. Complete the favour A Stag For All Seasons, started at Sindri’s House.

Trials by Fire – Complete the Trials of Muspelheim. Rewarded for completing The Final Challenges favour.

Ready for Commitment – Fully upgrade one armor set. You must upgrade all three pieces of one armour set to level nine, including chest, wrist and waist armor. All three pieces must belong to the same armor set or share the same name and you cannot mix pieces. You can upgrade pieces at any blacksmith and should get the required materials automatically from progressing through the story.

Ragnarok – Battle the All-Father. This is rewarded for beating the eighth boss in the main story after the Odin boss fight in The Realms of War quest.

Grave Mistake – Battle King Hrolf. This is rewarded for completing the Fit for a King favour. Hrolf is the final Berserker boss in Midgard. You must collect all Berserker Gravestones to get this far. Your gear should be level nine to take him on.

The True Queen – Battle Gna. This is a reward for completing the favour Defend Your Valour. Gna can be found at the Muspelheim Crucible but only after the story is complete. She is a level nine Valkyrie boss and one of the most difficult challenges in the game. Fully upgrade your gear before taking her on.

God of War Ragnarok is available on PS5 and PS4.

READ NEXT: 15 Best God Of War Gifts You Should Check Out.