A full tank of challenges. 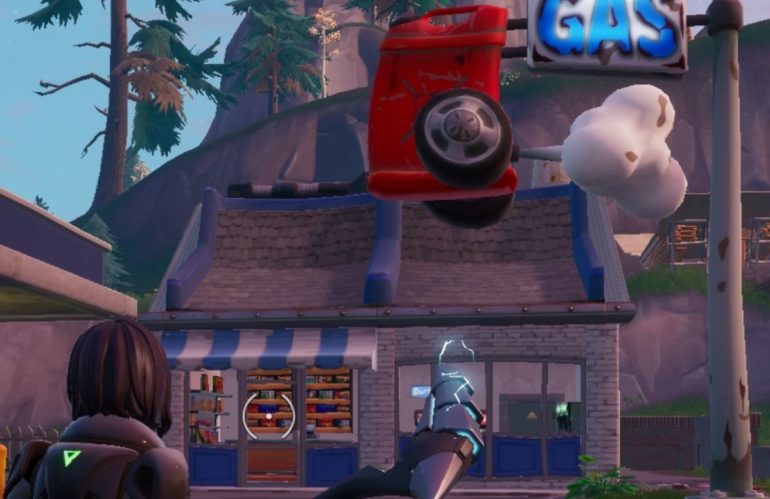 Fortnite Season X is in full swing and with it comes the Week 2 mission, ‘Spray And Pray’. The mission this week focuses heavily on using your spray emotes and using close range ‘spray and pray’ style weapons (SMGs and the Minigun specifically).

Week 2 contains the highest concentration of interesting challenges this game has seen since earlier days. This goes as far as to have the Prestige missions being completely unique, rather than just more difficult versions of the normal missions. This guide is focused on spraying three different gas stations, which is a themed repurposing of a very old challenge from over five seasons ago.

Below is a map with all of the gas stations we could find circled in red. Remember you don’t need to spray all three in a single match and you can choose any three out of the total seven to complete this challenge. 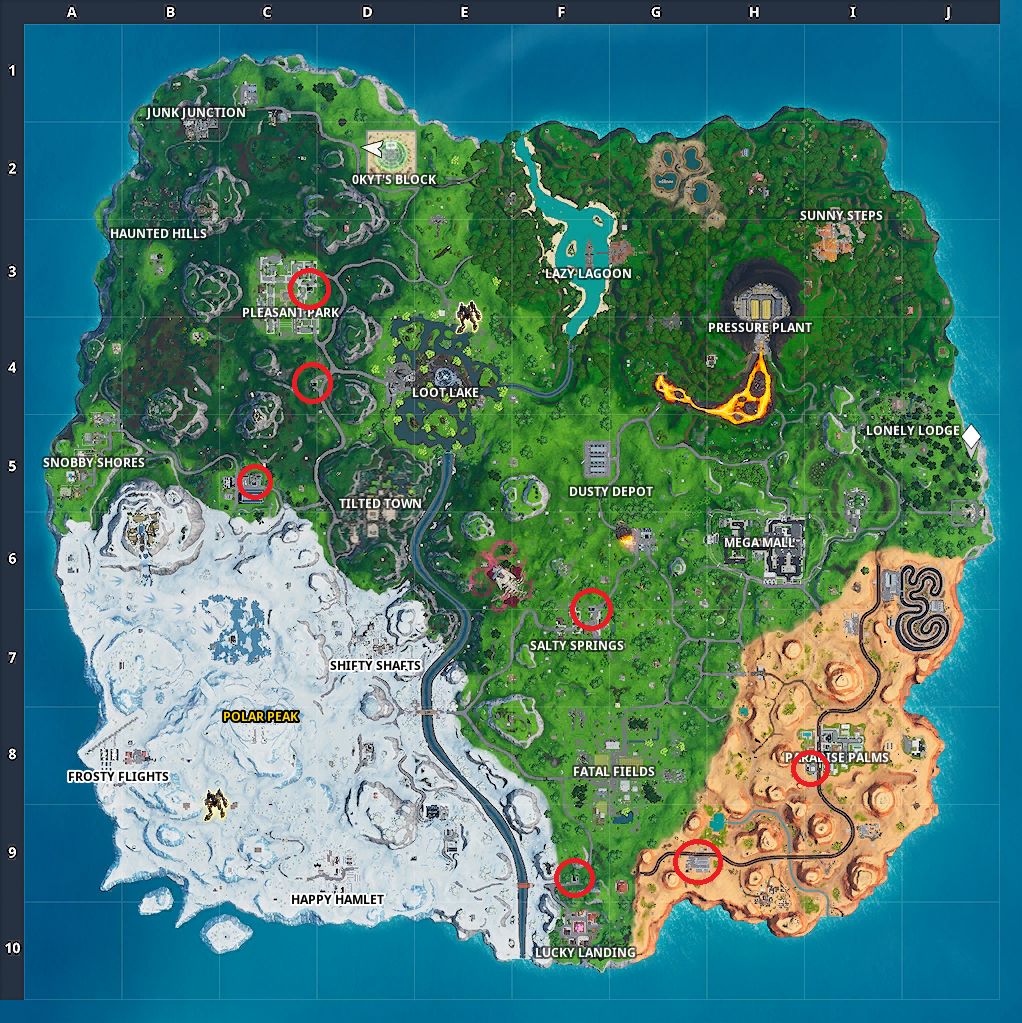 If you’re aiming to complete this challenge in a single match, there are two real routes you can take. The first is to start in Pleasant Park and make your way south down the main road to the unnamed soccer stadium town (or vice versa). The second is to land in Paradise Palms and take the main road out south and to the east past the truck stop and onto Lucky Landing (or vice versa). Just remember to spray each gas station as you go so you get credit. 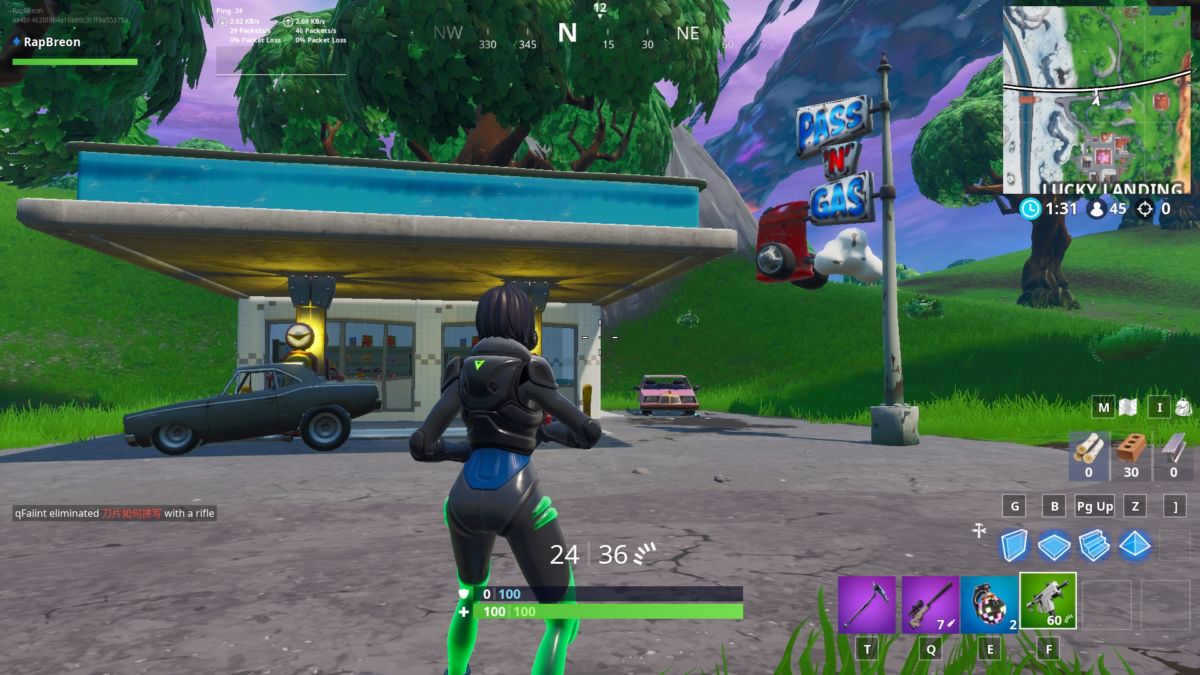 Directly north of Lucky Landing, over the hill is a Pass ‘N’ Gas (the main gas station chain in Fortnite) gas station. Located at F9 on the main map’s grid. 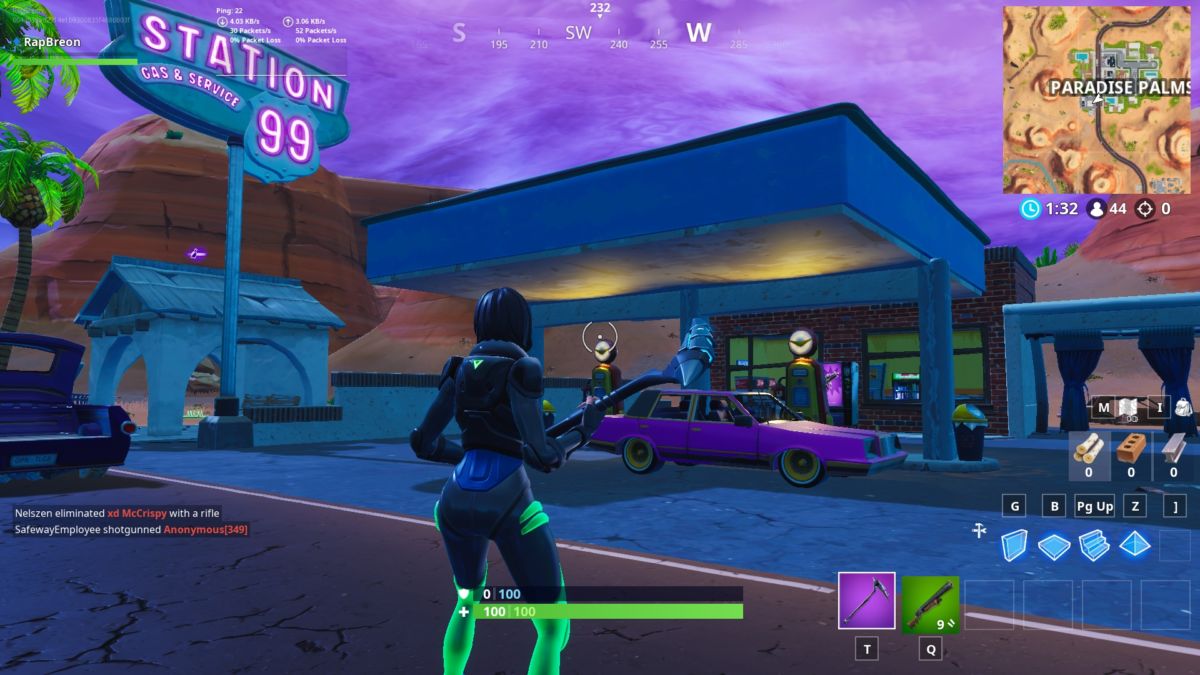 On the southern side of Paradise Palms (south of the main hotel), is Station 99. I8 on the main map’s grid. 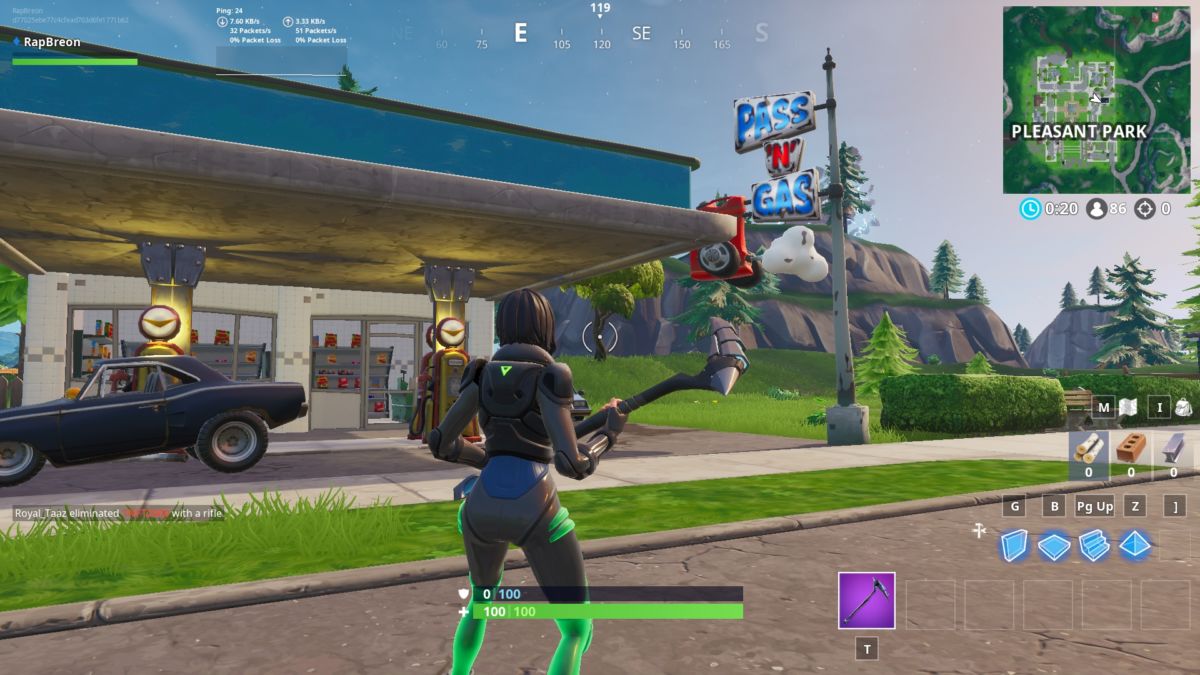 On the eastern side of Pleasant Park (directly east of the central park) is a Pass ‘N’ Gas gas station waiting to be sprayed. C3 on the main map’s grid. 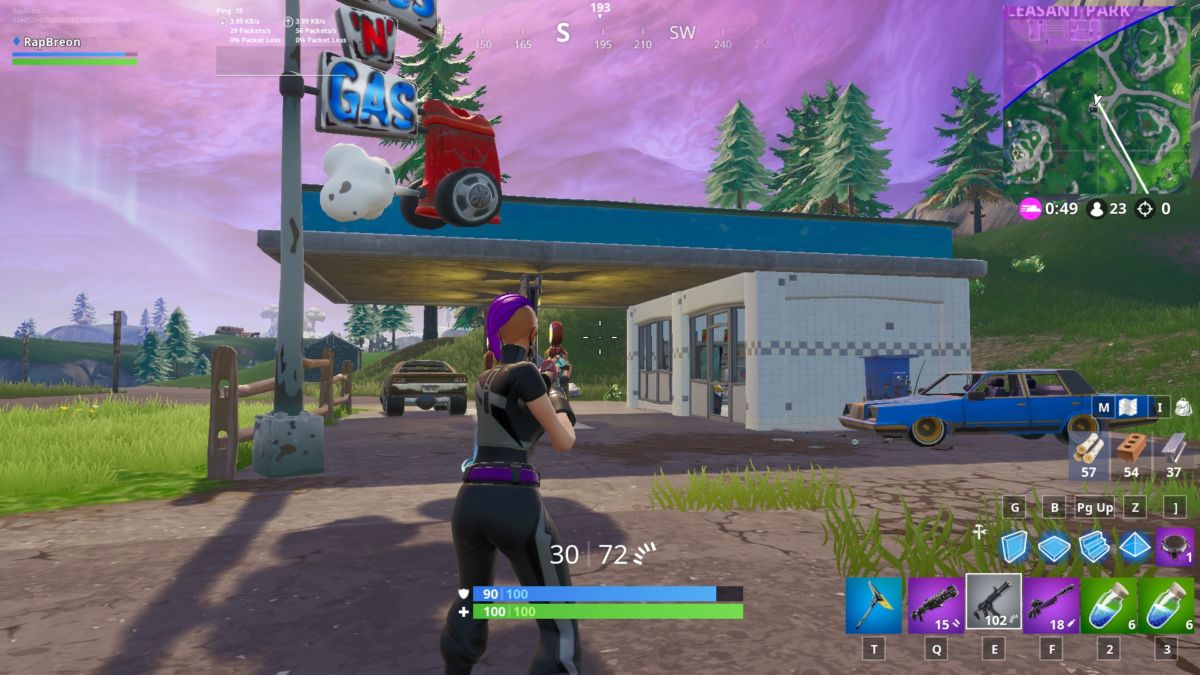 If you follow the main road south out of Pleasant Park, you’ll stumble upon a Pass ‘N’ Gas gas station just a short ways down the road. You can find it on the intersection of C4 and D4 on the main map’s grid. 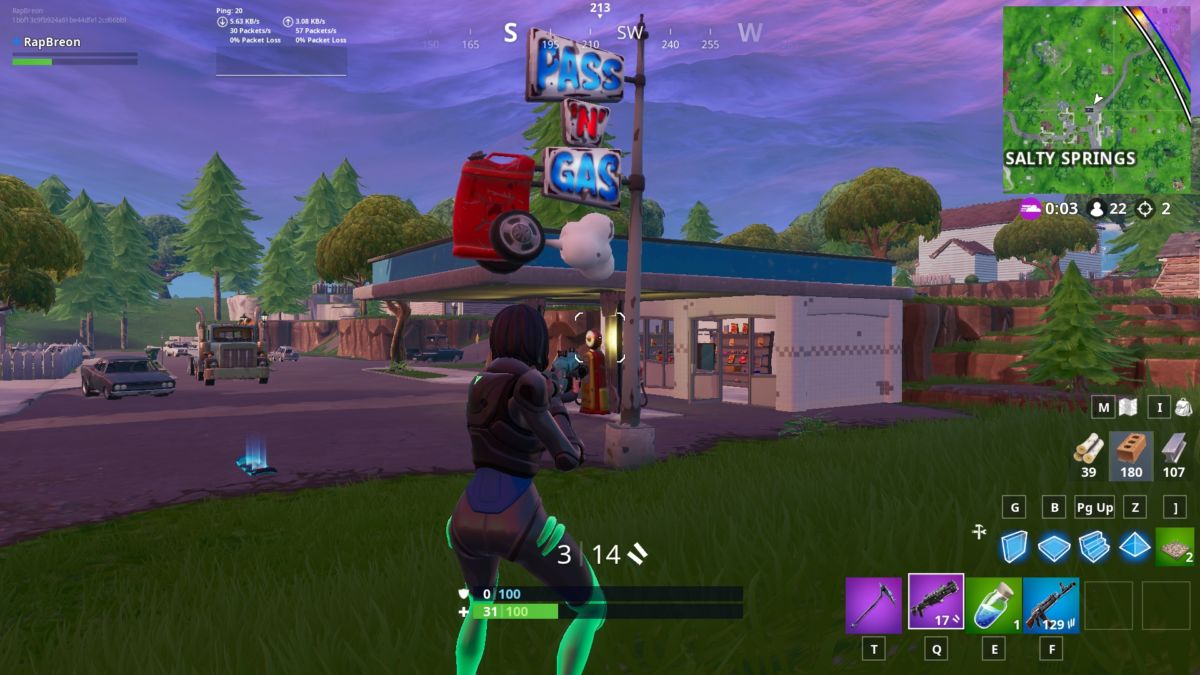 On the northeast corner of Salty Springs lies another Pass ‘N’ Gas gas station. Located on the intersection of F6 and F7 on the main map’s grid. 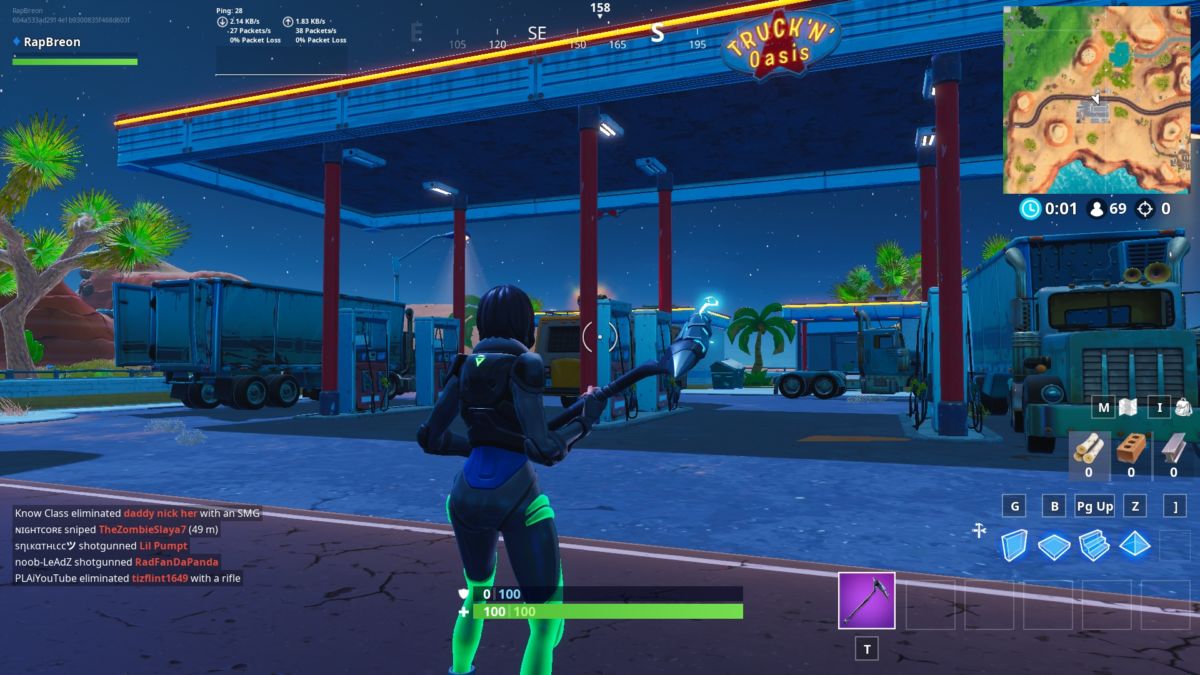 Directly east of Lucky Landing, on the edge of the desert where it begins to blend into the grasslands is the biggest gas station in the game, Truck ‘N’ Oasis. More of a truck stop than a traditional gas station, you can find it on the intersection of G9 and H9 on the main map’s grid. 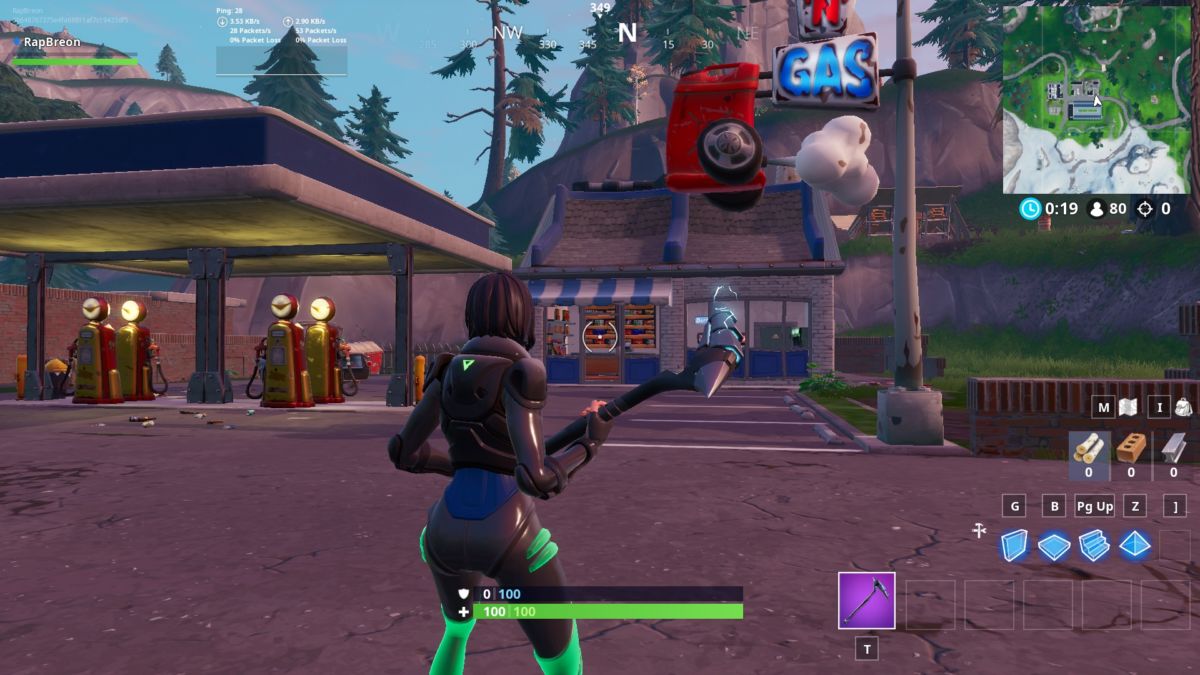 Directly west of Tilted and east of Snobby Shores is a small unnamed town. The main attraction of this town is a large indoor soccer stadium (hence the name). On the eastern side of this small town is a car garage and a Pass ‘N’ Gas gas station. C5 on the main map’s grid.

Once you’ve sprayed three of the seven available gas stations, the challenge is considered completed. You can access your sprays via the emote wheel, just don’t forget to actually spray the station.