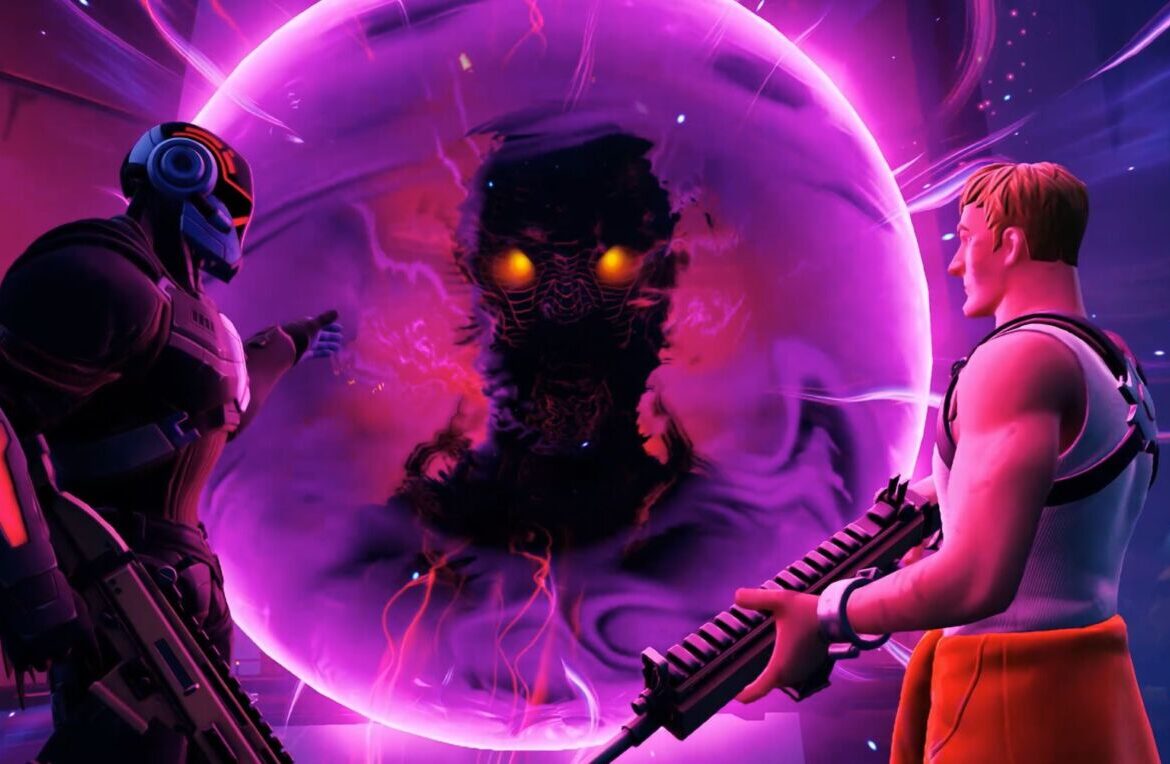 First mentioned during Chapter 2 – Season 6’s Zero Crisis Finale, Fortnite‘s primary antagonist has always been hidden in the shadows: Genō. Or just Geno, when they realized the fancy flair would never catch on. Probably useful to figure out how to pronounce it at first.

Geno leads the Imagined Order (IO), a reality-spanning effort to catalog and control all existence. Their technology pulls people into a Loop of combat, where all memory and extraordinary abilities are lost. Since everyone is on even ground, this allows the IO to analyze every being brought to their playground, and live out every 90s child’s Alien vs Predator vs Terminator dreams. A former agent, now against the IO, was the first to mention Geno’s name: Jonesy, played by Troy Baker.

He did so in calling for help to the faction who directly oppose the IO, The Seven, who have been hunting Geno for a long time. The Foundation, their leader played by Dwayne Johnson, stopped his Jonesy-smashing superhuman kick in light of the name being mentioned. Every appearance of the character has had some connection to Geno and his hunt for him.

Here’s five Geno facts about this enigma of a character in Fortnite, as his appearances become more and more frequent.

Geno is obscured not only the narrative way, but also the literal one. During the Chapter 3 – Season 2 event Collision, the Zero Point had its reality portalling capabilities focused on Geno’s home — wherever that is. Foundation and Jonesy leapt at the first sight of his smoky silhouette, hopefully not messing up his living room carpet.

From his realm, Geno instructs the IO’s various bases and operations as they carry his mission forward. Only the highest-ranking agents can even contact him, showing how only the truly dedicated to his mindless cause are rewarded for their insanity.

This is not an unfamiliar trend for Fortnite’s story, as characters like Doctor Slone were first introduced as silhouettes and only fully revealed later on. Geno is likely to follow this pattern, but being the biggest antagonist the game has ever introduced, his first appearance will impact the entire story.

The root word “Geno” means family and kind, origin in a sense of genealogy. Fortnite has always had impressive care in choosing the name of its characters, with the IO’s lead enforcer — Gunnar — having a Nordic name meaning soldier, and Jonesy being named after Ripley’s cat in the 70s movie Alien.

Not to mention it being half of the word “genocide”, something the IO is likely guilty of in their war against all universes. Quite the accusation, but they are the biggest villains to ever exist in fiction.

One unfortunate aspect to this recent naming has been the lack of any Kevins or Blevins, community-given names to previous characters that were shrouded in mystery. However, Epic Games ensuring their biggest card has an imposing name right from the get-go shows they are ready to take him to great heights.

Another possible connection: The Sisters, two members of the Seven named Imagined and Order, respectively. That on-the-nose reference, and the complete lack of memories from their past, could imply Geno has family on the other side.

During the Chapter 2 – Season 8 “The End” event, a memory wiping machine was almost used on Jonesy, so the technology does exist in the IO’s hands. Whatever led the faction’s leader to not only come out of his pocket realm, but to also erase the memory of these cunning and charming characters, must have been monumental.

In the Resistance Quests during Chapter 3 – Season 2, Jonesy mentions Geno wiped the sisters’ files from the IO’s systems, something that was never done permanently before. This solidifies the connection between them even more, and with The Imagined’s skin description being “her past is the key to our future”, this plot thread is sure to be sewn soon enough. Maybe into a nice blanket of family warmth.

After the Marvel Multiverse first crossed over to the Island, its greatest heroes and villains became aware of what the IO were doing. Iron Man and other Avengers planned their stand against Galactus, while Doctor Doom settled in Pleasant Park with a shiny throne and robotic servants.

Nexus War was the first Fortnite conflict that Doom had a hand in, but in the newly-released Zero War comics, he is part of the threat. The Seven try to defend the Zero Point as the IO launches an ultimate strike, and Geno recruits Doctor Doom to the IO’s prestigious inner circle.

What the two will plot leads to the current season, as all five comic issues take place within the previous one: Chapter 3 – Season 2. Even though players piloted a giant cuddle bear to destroy the product of their plans, the process leading up to that will still be interesting to see, as both characters are better developed within the world of Fortnite.

At least, not anymore. Our first glimpse at Geno, during The Collision event, showed what can only be described as a volcanic set of smoky tentacles in humanoid form. Their design mimicked the same celestial look from the Zero Point’s previous appearances.

Fortnite’s previous protagonists and antagonists have been mostly humanoid, with The Origin being the only one to diverge in terms of similarities to humans in his blue skin and tribal markings.

If Geno’s appearance implies that he has absorbed energy from the millennia of working with the Zero, or something else happened, remains to be seen. But whatever is revealed about his past and his power will set the stakes as the story reaches its 21st season.

MORE FORTNITE: Fortnite: Who Is The Mysterious Plant Figure In Season 3?