Mapping out the future of the game. 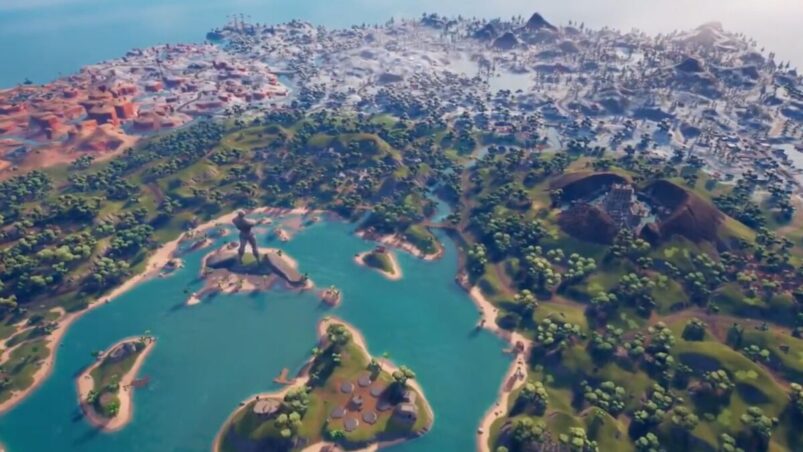 UPDATE: The full map has been officially revealed.

ORIGINAL STORY: Fortnite: Chapter 3’s Battle Pass trailer has leaked way, way ahead of time, bringing with it a first glimpse at the brand new map.

Well, kind of brand new. While Chapter 3’s map has biomes and new POIs, it also has lots of old favourite spots returning, such as Sunny Steps and what looks like Paradise Palms.

Here’s a wide look at the new Fortnite map in Chapter 3.

The new biomes are hard to miss on the map, including a desert biome and a snow biome. It seems like Paradise Palms is back in the desert.

There’s even a race track.

And the aforementioned Sunny Steps.

As for the snow biome, there’s a lot less distinct glimpses at it in the trailer, but it does seem like dinosaurs will be roaming around.

Players will also be encountering weather events like tornadoes and lightning around the map.

What might be most interesting for superhero fans is that The Daily Bugle, Spider-Man’s (well, Peter Parker’s) place of work, along with what may be parts of New York City.

One of the biggest signs of things to come is a giant statue for The Foundation at the center of the map.

There’s absolutely no way some kind of device or event doesn’t coincide with this statue dominating the map. It also overlooks a bunch of buildings — perhaps belonging to the new agency or organisation that will loom over the chapter?

Here’s an interesting detail: what looks like a volcano can also be seen,

In case you were wondering, it doesn’t look like Tilted Towers, the most requested old POI, will be making a return for Chapter 3. That doesn’t mean any of these spots can’t be even better, though.

Fortnite Chapter: 3 is due to start sometime after the conclusion of The End event, which takes place on December 4th, 2021 at the following times:

However, the launch of Chapter 3 itself is unclear. While many expect it to follow a few days of the game being offline like at the end of Chapter 1, a new pack is scheduled to launch on December 5th, so that’s likelier.