Do you think you can overcome Death's design? 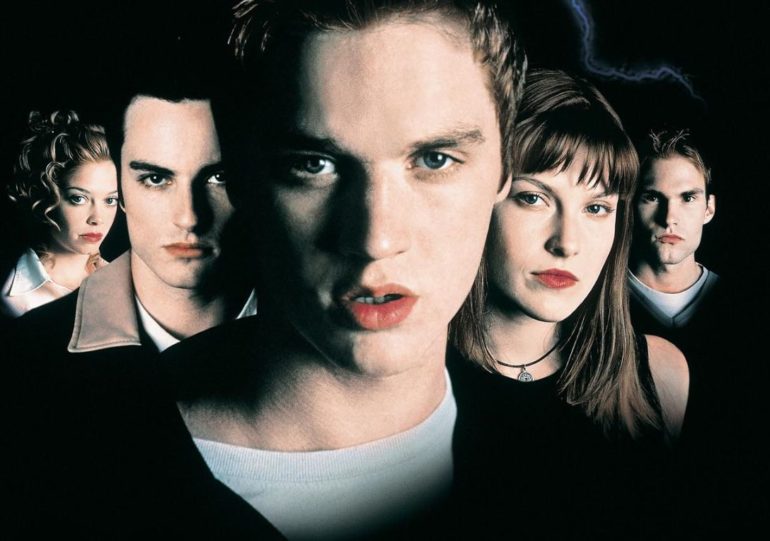 With only 34% on Rotten Tomatoes, I would say it’s clear that Final Destination isn’t the epitome of the horror genre. Yet it is a film that spawned 4 other movies, and it is a franchise that I have no trouble revisiting whenever any of the movies pop up on cable (except Final Destination 4, which is nowhere in the league of the other movies). So what is it about this film and the franchise that grabs us in the first place?

Maybe it’s our curiosity with regard to the phenomenon of premonitions. We often wonder if our dreams show us something beyond the present, we linger on moments of deja vu as we contemplate the possibility of having seen our future before it actually happens. I have had family members call up other family members, telling them not to get on a plane because they had a dream about a plane crash. We want to laugh and say “It’s just a dream”, but a small part of us is frightened of the possible reality. Should I chance it? If you decide to change your plans, and nothing happens, does this mean it was just nonsense? Or did you somehow change the course of your destiny, and everyone else’s, just because you heeded someone’s warning?

The premonitions were the more intriguing part of the franchise for me, since it shows you the way forward, so that you can make the decision on whether to change it or not. But, if Death has already planned your end, then where do these premonitions come from? Are they from a divine Godly source, a display of will, or is Death letting you see what comes just for the laughs? I wished the franchise dived more into why these individuals were chosen, and the source of these premonitions. Then again, the supernatural is layered with ambiguities, so the whole point of it is that you will never know.

In this film, the premonitions come to Alex (played by my childhood crush Dewon Sewa), who changes his path and that of his fellow classmates when he has a dream about the plane they are on exploding soon after take-off. He freaks out (relatable), and has to be escorted off the plane, dragging a few others in tow. As the plane takes off, their disappointment at having missed their flight turns into sheer terror when the plane explodes, because now the dream is a reality. It tackles a really complex idea: the relief you feel at your life being spared, yet on the other hand, there is the suffocating guilt of having survived, not to mention the grief from the loss suffered.

READ NEXT: 20 Best Horror Podcasts You Should Listen To

The issue with the film is that is never lingers in these spaces, preferring to focus on the deaths, intent on making them as gruesome and gory as possible. Generally, the scariest deaths are the ones that occur in the most ordinary of spaces. In this film, Tod’s (Chad Donella) death was probably the worst of the lot. Getting strangled to death by the laundry line may not seem like the most plausible thing, but the way it begins, with him slipping on the floor and plunging neck-first into the line, is immensely horrifying. It’s moments like this that remind us acutely of our mortality; I may not hang my washing in the tub like that, but I have slipped in the bathroom many times, and even came close to hitting my head against the sink.

As the camera pans over the room surveying the next victim, you are forced to consider what could kill a person in the space, and then you become a witness to the sheer horror of it all. I have been unable to go through with my plans for lasik surgery mainly because I am so paranoid about the equipment malfunctioning and burning out my eye. Thank God my skin tone exempts me from needing a tan; burning to death just because you want to look good is the saddest way to go.

The main conceit of the film and the franchise is that you can’t cheat death. If you somehow thwart his plan, like what happened with Alex and his classmates, then he redesigns a new plan for you. There is no escape, only the inevitable end. This aspect of the franchise always fascinated me, since it negates the idea of autonomy and agency. It seems that whatever you do, you can’t go around the conclusion Death has planned for you. Alex, in an extended comedic moment, tries to death-proof a space by duct-taping everything and eating food from cans. Ali Larter’s Clear also gets herself checked into a mental institution so as to keep herself off Death’s radar in the second movie, but he eventually claims her. It might take a while, but Death will eventually get a hold of you.

This is always the case at the end of the movies, where we so ardently want to believe these remaining characters have escaped death, only for you to realise that the hangman’s noose still firmly encases their necks. Even when you think there is a way out, like when the fifth movie introduces the idea of allowing someone to take your place, so Death meets his quota and you are spared, we never actually see this succeed. Perhaps this is why the franchise still has interest all these years later. In other horror films, there is always a way out; killers can be killed, spirits can be exorcised, evil can be dealt with.

But death isn’t evil, it’s neutral ground. It is a fact of life, our final destination, one that we might like to deter if possible, yet aware that ultimately, where we stand in relation to Death and his plans is never within our power to change.