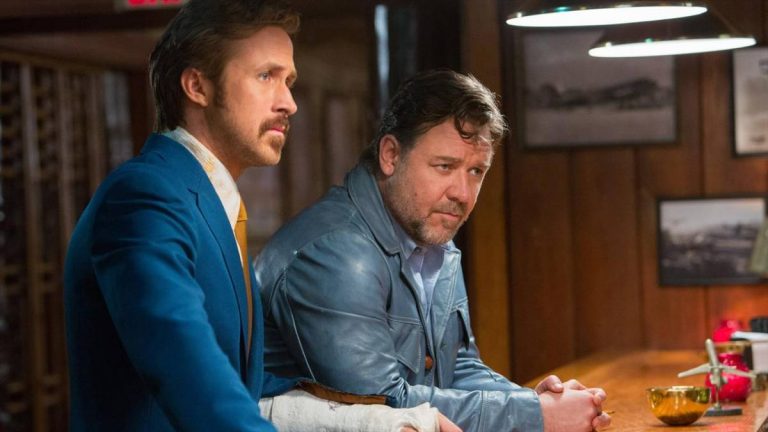 Watching The Nice Guys was like discovering a cult 80’s movie after two decades of obscurity. It’s here for mainstream audiences to enjoy – a Lethal Weapon for a new generation.

Director Shane Black returns to a genre he popularised with his scripts for Lethal Weapon, The Last Boy Scout and The Long Kiss Goodnight in 1995. He loves pitting two opposites together to reluctantly solve convoluted crimes. Kiss Kiss Bang Bang was a welcome return to this formula in 2005, but then Shane Black decided to dip his toes in the Marvel universe. How great it is then to have a buddy comedy in 2016 that almost acts as an homage to more innocent carefree filmmaking. It’s no doubt that attention to projection celluloid is intentional to this theme of celebrating the past.

Eschewing coolness from the offset with retro fonts and jaunty Jazz music, the world of 1970’s Los Angeles is a fully realised party of vibrant colours, crazy characters and casual violence. Film posters for Jaws 2 occupy billboards and Tim Allen headlining The Comedy Store is a nice inclusion that generates a sense of time and place. I’m sure there are many more references I didn’t spot which I hope to find on my second viewing.

Russell Crowe commands the screen as a gravelly voiced private detective who spends much of his time dealing with perverts fists first, threats later. Ryan Gosling on the other hand is in the same profession but cuts a wimpish figure with a drinking problem. Both realising their agendas match, they team up to unravel a convoluted plot involving a dead pornstar. To say anymore would spoil any surprises and make it difficult for me to explain in words so I won’t bother. Needless to say, Shane Black has stuck close to his storytelling from Kiss Kiss Bang Bang and wants you to be as confused as the leading pair. It’s all great fun and I enjoyed the one or two genuine shocks.

What works so well importantly is Crowe and Gosling’s chemistry. They bounce off each other with exchanges of sharp dialogue and funny bickering. Russell Crowe looks at ease on screen for the first time in many years after a string of flops. His menace and steely stares reminded me of his breakout performance in LA Confidential. Ryan Gosling continues to surprise with a funny performance that remains believable even when he starts dreaming about giant wasps and survives some incredible drunken falls.

The Nice Guys would never work if Shane Black didn’t deliver on scripting. His direction is more fluid and exciting than both Kiss Kiss Bang Bang and Iron Man 3, but his writing is consistently funny and knowing. I could have done with a little less crassness in some scenes but I laughed often and the action is delivered with panache.