While not redefining the traditional Metroidvania experience, Feudal Alloy abides by it with a style that is all its own. 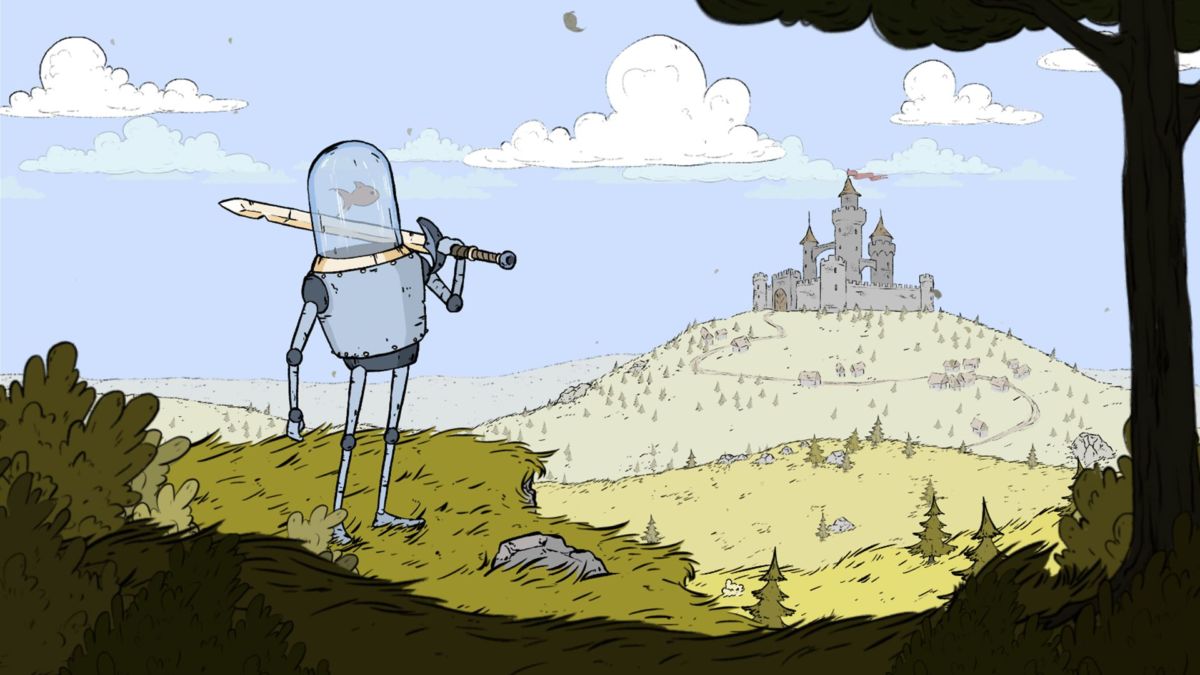 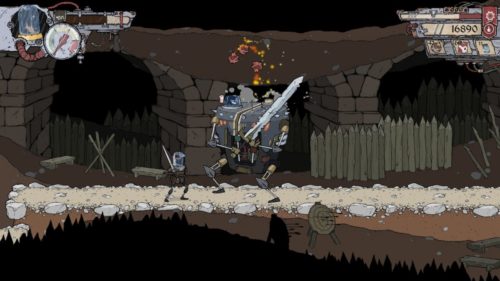 Over the last few years, no other genre has seen as feverish of a resurgence as that of Metroidvania genre. From Hollow Knight to Dead Cells to Owlboy, these games are remarkable for their ability to inject a unique spin on the hallowed framework of the genre. Exploring dungeons in search of items that allow players to progress is a simple concept, so it’s even more imperative that developers include unique gameplay or innovative aesthetic element to make it memorable. Feudal Alloy, the second game from developer Attu Games, avoids the common pitfall of mediocrity due to its nearly flawless gameplay and creatively bizarre, yet charming world which makes it stand apart from the competition.

Set against a medieval steampunk backdrop, you play Attu, a fish controlled robot farmer who cares for his village’s retired veteran robots. Attu’s idyllic home is shattered when outsiders steal his town’s precious sunflower seed oil that’s used to maintain the chassis of the veterans. Given a sword and a set of armor, the player sets off into the unknown wilderness to retrieve what was taken from him.

What instantly sets Feudal Alloy apart is its bright and charming color palette along with highly detailed graphics novel-esque art style. Every inch of the world is meticulously detailed, from the bolts which fly from enemies when they are destroyed, to how the fish bobs in its tank when Attu jumps. The wacky weirdness of its medieval steampunk world is inherently different and intriguing, so I was slightly disappointed that its backstory wasn’t supplemented by some form of text or audio logs. Regarding its story, Feudal Alloy’s is serviceable, and at its core, it’s to be experienced based on the merit of its gameplay and aesthetic rather than storytelling ability. 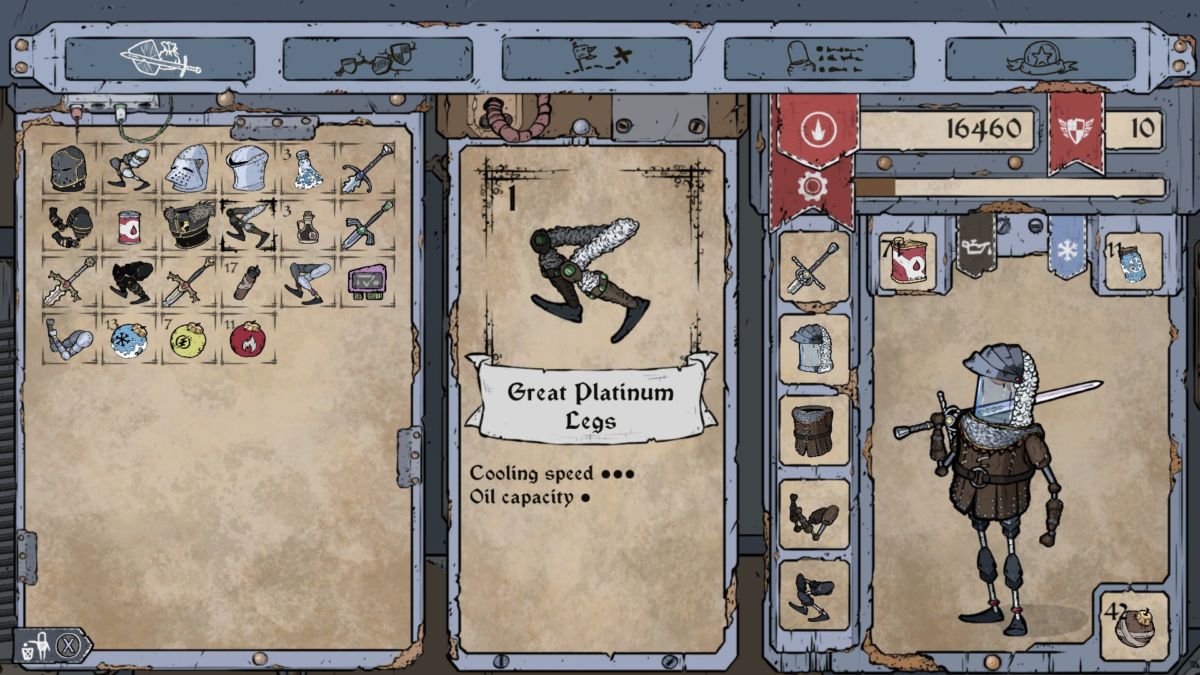 In traditional Metroidvania style, the player will explore maze-like environments that house enemies, treasures, bosses, and locked doors. Coming across locked or inaccessible areas is common early on, but the deeper into the world the player progresses, the more ways they find to unlock these barriers. I found the early hours of Feudal Alloy to be rather slow, but once the momentum begins to build with each new item or module discovered, my play sessions began to grow longer and longer. While the process of unlocking areas of the map are familiar, the combat is where it shines.

As the player controls a robot, the standard health and mana have been replaced with more bucket and bolts conventions. The player has an oil reserve which serves as their health, and they have a self-replenishing steam gauge that acts as a stamina bar. Steam is used to execute swings of your sword or utilizing abilities.

This is where Feudal Alloy’s gameplay takes a more strategic approach as the player must consider the amount of stamina required to overcome foes. While fending off one or two enemies is manageable early on, the game quickly throws a handful of enemies at the player, all of which have different attack patterns and weaknesses. Button mashing is effectively useless as it leaves the player vulnerable due to having expended a significant amount of steam. The player’s steam limitation requires them to approach combat more diligently and how they choose to use modules. 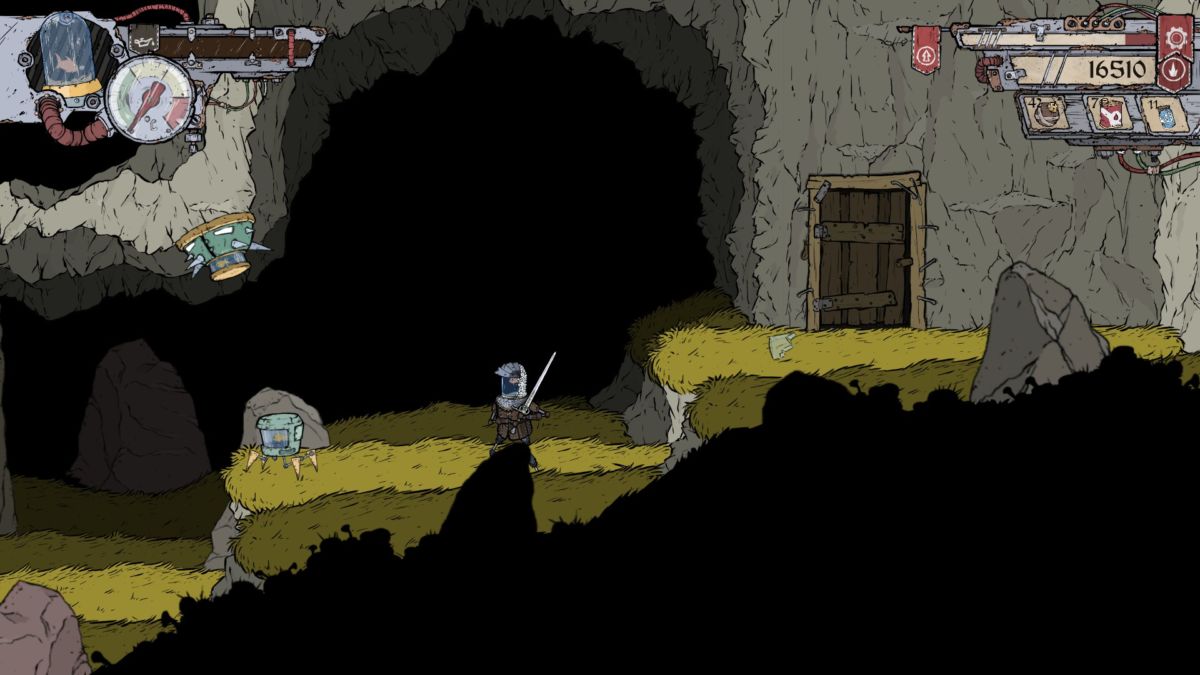 Modules grant the player new abilities that have both environment traversal and combat uses. While abilities such as dash and double jump are standard fare, modules such as electro pulse double as both a way to destroy previously impenetrable doors as well as a way to stun enemies. These modules come in handy when facing off against the game’s plentiful variety of enemies that evolve in difficulty the further into the world you progress.

The risk vs. reward of using modules that can momentarily immobilize an enemy comes at the cost of a great deal of steam, but using a cooling potion beforehand can decrease the risk. Thinking one step ahead of combat will always net positive results, failure to do so resulting in Attu overheating, and his only recourse when overheating is to run or jump away from enemies until he cools down.

Smart utilization of modules is helpful for regular combat encounters but are essential when it comes to challenging rooms and bosses. Periodically, the player will come across rooms that confine them until the threat is eliminated. Challenge rooms throw various environmental and enemy variables at the player, such as avoiding lasers while fighting flying bots. These rooms serve as tests for the player to see if they have adapted to the new abilities given them, and are a welcome challenge. 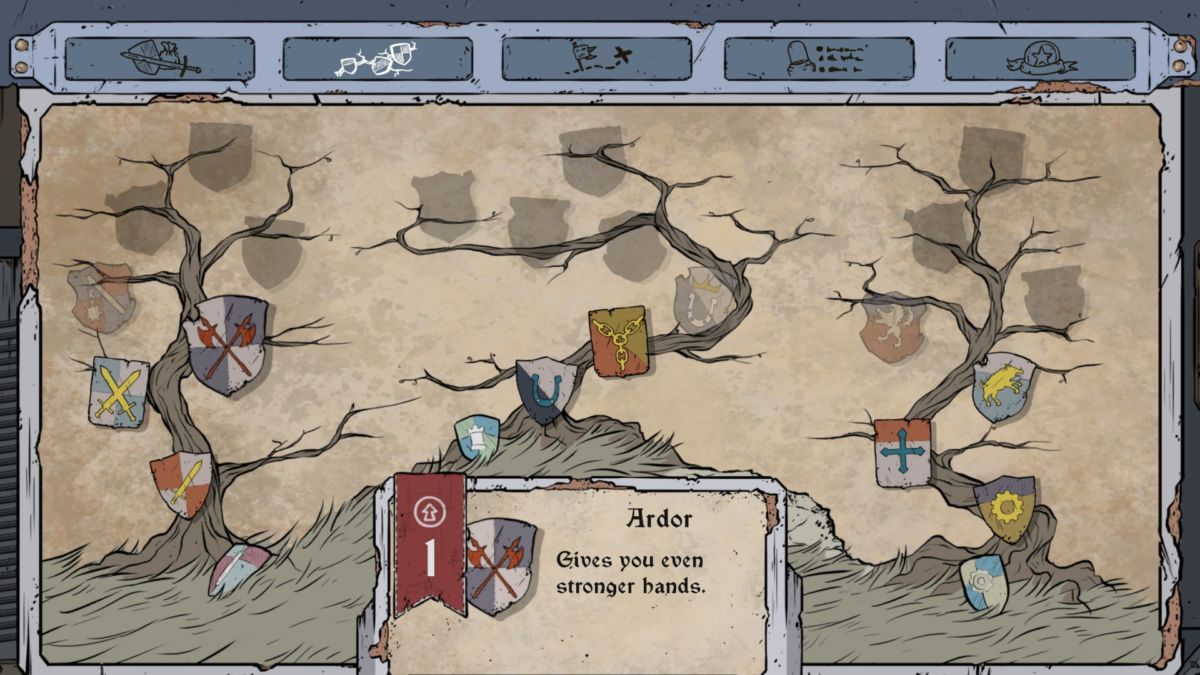 And then there are bosses, hulking behemoths of steel that comprise the entire screen, requiring careful thought and strategy to overcome. Boss fights require keen timing and careful steam management, and while the stakes of death are not all that punishing, to ignore a thoughtful approach will result in failure.

Boss fights are where Feudal Alloy’s light role-playing mechanics come into play, as armor and sword management can be the difference between success or death. The player will come across armor and swords that have varying stats affecting their armor rating, damage output, oil reserve, and cooldown rate.

Equipment can also be purchased at a general store located in most major zones. As with most games of this nature, you find better equipment through exhaustively exploring the map, so the store is more critical for stocking up on health, cool down, and bombs. There is the peculiar design decision not to include a use for obsolete gear that the player will amass throughout their journey. There’s no option of selling or breaking down equipment for parts to build new gear, the only option being to horde redundant gear or to drop it. A minor gripe, but given the amount of detail and polish applied to the rest of the game, it can’t help but feel like an oversight.

Make no mistake: while it certainly doesn’t redefine the genre, Feudal Alloy is an incredibly strong second title from Attu Games. It abides by genre conventions with a style that is all its own, nearly flawless gameplay, and an injection of strategy sorely missing from most Metroidvanias. One of 2019’s first strong indie titles.

Verdict
While not redefining the traditional Metroidvania experience, Feudal Alloy abides by it with a style that is all its own.
8.5