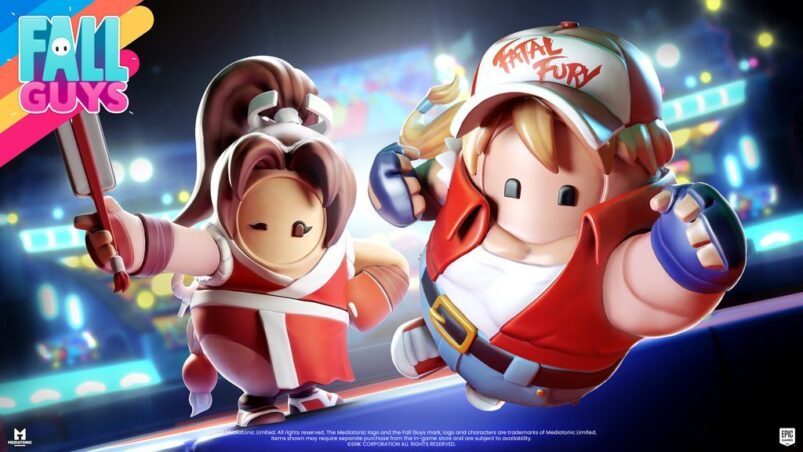 Fall Guys have had a lot of collaborations already across the game’s history, but it’s rare to see the physics based multiplayer bonanza feature some fighting game skins. This is why their upcoming collab with SNK is so meaningful, as it’ll bring Fatal Fury characters Terry Bogard and Mai Shiranui.

Terry and Mai are no strangers to cross-overs, with Terry making appearances in games like Super Smash Bros. Ultimate and Fighting EX Layer. Meanwhile, Mai has been featured in Dead Or Alive 6, along with appearing in countless SNK games. For fighting game fans, this collaboration might be enough to convince them to give Fall Guys a try.

Here’s everything you need to know about Terry and Mai’s skins in Fall Guys.

Players will be able to buy the different cosmetics on offer separately, or as part of a bundle. The cosmetics on offer will include full Terry and Mai costumes (Upper and Lower pieces), along with the “Shiranui Style of Ninja Arts” Nameplate and the “C’mon C’mon” emote, which is Terry Bogard’s signature taunt. Like pretty much all crossover cosmetics, these should be classed as “Special” rarity.

A price hasn’t been confirmed as of yet, but typically, the full skins will cost 1200 Show Bucks each, which works out to around £7/$8. Meanwhile, the emote and nameplates should be around 400 to 600 Show Bucks. There will be a bundle available that offers everything, which should be around 2400 Show Bucks, so if you’re planning on buying it all, that’d be the cheapest option.

The Terry and Mai skins for Fall Guys will be available on August 4th, 2022. The Item Shop tends to cycle through its items at 10am BST/5am ET/2am PT, so expect the Fatal Fury skins to go live around then. These cosmetics will be live until August 8th. It’s possible that they could make an appearance on the store again in the future, as Fall Guys tends to rotate skins through its store on a regular basis.

READ MORE:  The Best PS5 Fighting Games You Should Play