Evil Dead: The Game: How To Unlock Amanda Fisher 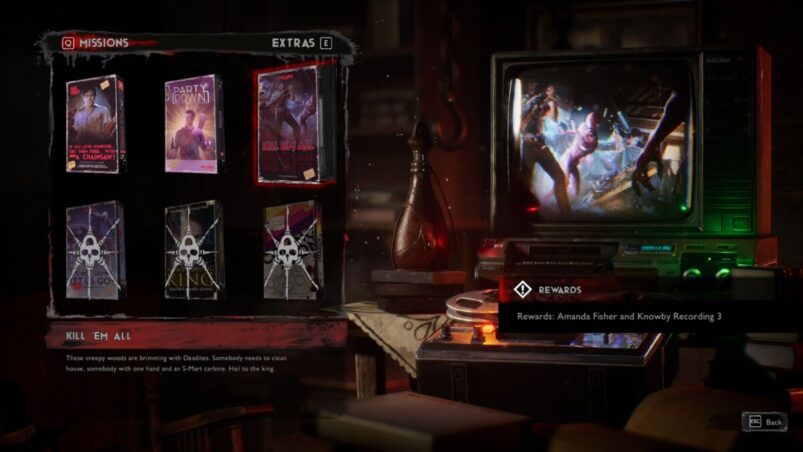 Evil Dead: The Game is the ultimate send-up to the Evil Dead canon, with plenty of characters appearing from the movies and show. One of the characters from the latter is yours to unlock too: Amanda Fisher.

To unlock Amanda Fisher in Evil Dead: The Game, players must complete the Kill ‘Em All mission. You will need to have completed the previous two missions, including the one to unlock another version of Ash.

This mission sees Ash trying to rid the nearby woods of Deadites, one swarm at a time. It’s quite the challenging mission, so be sure to stock up on ammo for the S-Mart carbine, especially early on in the shed. In the first section, you can just stand on the platform in the field and punch most of the Deadites to save ammo, but just be sure to dodge out of the way of their implosions.

Keep an eye out for any melee weapons in the second stage of the Mission to use against the Eligos, who keep splitting into multiple versions and can quite easily kill you in a couple of hits. Use your melee on them to deal more damage than bullets and to stop them from splitting, all while timing your attacks so you can dodge backwards.

Later, when you fight a “super” Eligos in the third section, keep your distance and fire away while evading their long range attacks. This Mission is ultimately about learning enemy spawns and conserving your ammo.

Once you’ve completed Kill ‘Em All, you’ll be able to take the fight to the Deadites with Amanda Fisher, who belongs to the Hunter class.

Amanda Fisher was a mainstay in the first season of Ash vs Evil Dead. Here’s hoping she gets a slightly better treatment here.