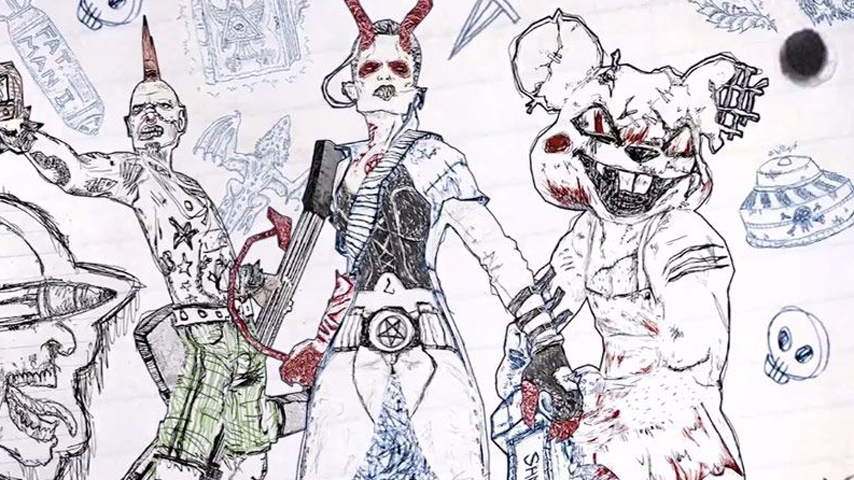 Drawn To Death is an online-only third-person arena shooter that takes place entirely between the pages of a high school student’s notebook. It’s a unique premise which sets up Drawn To Death’s greatest strength: its unique visual style. The entire game looks like a collection of angry doodles and sketches come to life and fighting it out on pieces of lined paper.

Drawn to Death was clearly aiming for a very specific tone, and kudos to Jaffe, along with Sony Santa Monica and The Bartlet Jones Supernatural Detective Agency, because the game absolutely nails the tone it was going for. The downside of this is that the tone they are going for doesn’t have a lot of lasting or widespread appeal. The visuals don’t get old, but the “edgy”, angry tone that permeates almost every other facet of the game wears thin pretty quickly. But more on that later.

The characters in the game range from run-of-the-mill to off-the-wall with entrants like the typical Special Forces “CommanBro” Bronco and the mohawk-sporting punk rocker Johnny Savage on one end of the spectrum, and characters like the cybernetic vampire Cyborgula, or Ninjaws; a sexy kunoichi with a shark’s head, that find the line between creative and weird then proceed to take a running leap over it. The characters all have a “Twisted Metal” feel, so much so in fact that I’d be shocked if Sweet Tooth isn’t offered as DLC somewhere down the road as he’d fit right in with the already existing characters.

In an attempt to make the characters feel unique and add a layer of strategic depth to the action, every character has their own unique special abilities as well as their own strengths and weaknesses when facing certain other characters. For example, Alan the psychopathic teddy bear mascot has the ability to cloak and set up sneak attacks with his chainsaw, unless he is playing against Cyborgula, whom is able to see Alan even when cloaked. Or the demonic desperado Diabla Tijuana being able to use her kneeling ability, which normally increases her accuracy, to absorb one of Johnny Savage’s special guitar riff attacks and transform it into a massive health boost. While this is a good idea in theory, I never really felt that the pro/con system came into play all that heavily, other than the above examples, and it definitely never played a part in who I chose to play as. The special abilities and attacks, however, are pretty well executed and fun for the most part and they can absolutely give players an edge by doing things like increasing their mobility or allowing them to inhibit the mobility of others.

In addition to the characters’ own special abilities and attacks, there is a large variety of weapons to make use of that includes the standard assault rifle, shotgun and rocket launcher type fare alongside more creative weapons, such as my new favourite video game weapon of all time, the “JRPG”. A launcher type weapon that fires a game cartridge out of a 16 bit console that tracks the enemy and, upon a successful hit, explodes into a collection of sprites that would look at home in any SNES era Final Fantasy or Dragon Quest game. A nostalgic smile crept across my face every time I killed somebody with it

On paper (excuse the horrible pun), a lot of thought and care went into making the characters stand apart from one another as well as giving them a variety of interesting weapons to kill each other with. Despite all this, the gameplay itself just really isn’t all that grand. It’s not “bad” per se, but it’s definitely not great. It’s just sort of “ok”.

The movement is floaty, weapons that aren’t launchers, at least that I tried, lack “pop”, and the gameplay as a whole simply feels imprecise. It definitely does not have the “just one more match” hook that Call of Duty or Halo did when I was into those games. More often than not, rather than “just one more match”, I found myself giving Drawn To Death “just one more chance” to rise above mediocrity. Something it could never achieve.

Other than the gameplay, Drawn To Death has many other faults, such as the lack of modes. It’s really just Free For All, Team Deathmatch, and Organ Donor, a cross between Kill Confirmed and Capture The Flag that has you collecting hearts that players drop upon being killed and depositing them in designated zones for points. Another baffling fault is the low player limit of 4. You have 6 characters to play as, why not up the player count to at least 6? Kind of puzzling they bothered to include any team based modes at all with such a low player count. Even with the maximum player count of four, more often than not you won’t find enough players to fill a lobby anyway. It’s hard to say if this is a matchmaking issue or if it boils down to just not that many people playing the game in the first place, which is a bad omen considering the price point thus far. Drawn to Death released this month for free on Playstation Plus but will be available for 26.99 (CAD) starting in May. If the game isn’t popular enough to attract players as a freebie, I don’t have high expectations for it once people have to actually start plopping down money to play.

Drawn To Death’s biggest flaw may very well simultaneously be one of its greatest successes: its atmosphere. Drawn To Death tries ridiculously hard to feel like it was spawned from the mind of an angry teenager, and it succeeds with ease. The problem with this, however, is that not many people enjoy being inside the mind of an angry teenager. Hell, I didn’t like it when I was an angry teenager. Everything about the atmosphere, tone, and writing is over the top, juvenile, and vulgar. I’ll admit, I chuckled at a lot of it at first. In a “I can’t believe they actually said that” kind of way. It didn’t take long for it to become grating, though. The announcer was the first aspect to grow old. Not only did I get sick of hearing him exclaim “fucking tasty!” every time I grabbed a health power-up, he became an active distraction during many matches as he went of on nonsensical tangents while the clock wound down.

It’s sort of admirable that the developers leaned into such a blatantly offensive theme in today’s world of political correctness and being offended over everything. Drawn To Death is proud to be what it is. It pulls no punches and makes no apologies. Unfortunately for Jaffe and co, beyond a small niche market, masturbating jokes, frequent, gratuitous expletives, and “goatse” gags (yup, there’s one in there), it won’t appeal to many people. A video game is supposed to do everything in its power to draw you into it’s world and keep you there. Drawn to Death’s awesome visual style may grab people’s attention at first glance, but its gameplay doesn’t draw you in and everything else about the game will actively push most people away. It’s worth a download while it’s free for a brief chuckle, but I can’t recommend spending any money on it. Better luck next time, Jaffe.

Verdict
Drawn To Death has a few things going for it, like its unique art style and creative arsenal of weapons and special abilities. But its strengths aren't enough to counteract the game's faults or offputting design choices and raise it above being an “ok” game.
6
Cultured Vultures is a pop culture website established in 2013 covering all things gaming, movies, and more. We eat your words.
All The News On The Biggest Games