What do we have here? One of the best shooter platformers ever now on the Switch? You've swayed me. 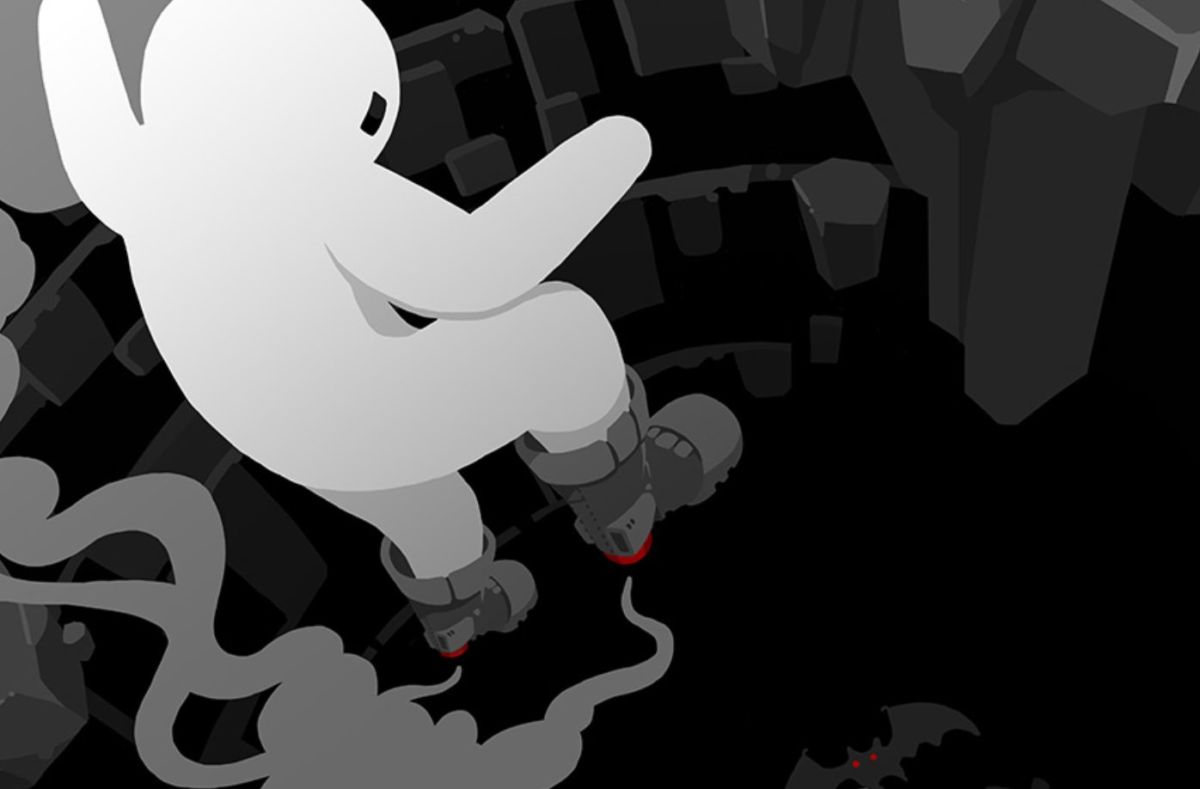 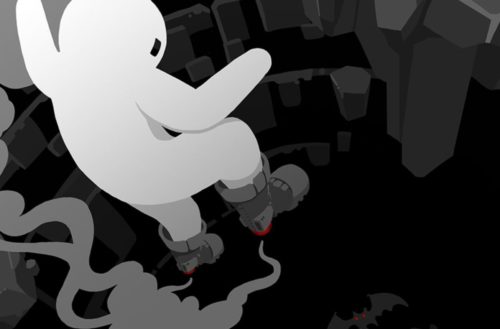 Despite having now played it on three different platforms, Downwell still feels as fresh and irresistible as the first time I strapped on my gun-boots and started the descent. Arriving on the Switch, which seems like such a natural fit, Downwell comes with a reputation of being a challenging lo-fi platformer with every inch of progress throughout its procedurally generated levels feeling like a mile.

It’s what makes the game still feel like such a small-scale revelation despite it having initially launched three years ago. You’ll grunt with anger and curse the game’s blasted bats before diving right back in for another round, only to find the layout is more favourable this time out. Downwell is as absorbing a game as you’re likely to find at its price point, it offering a considerable return on investment with potentially dozens of hours of playtime for a game with “just” five different levels. 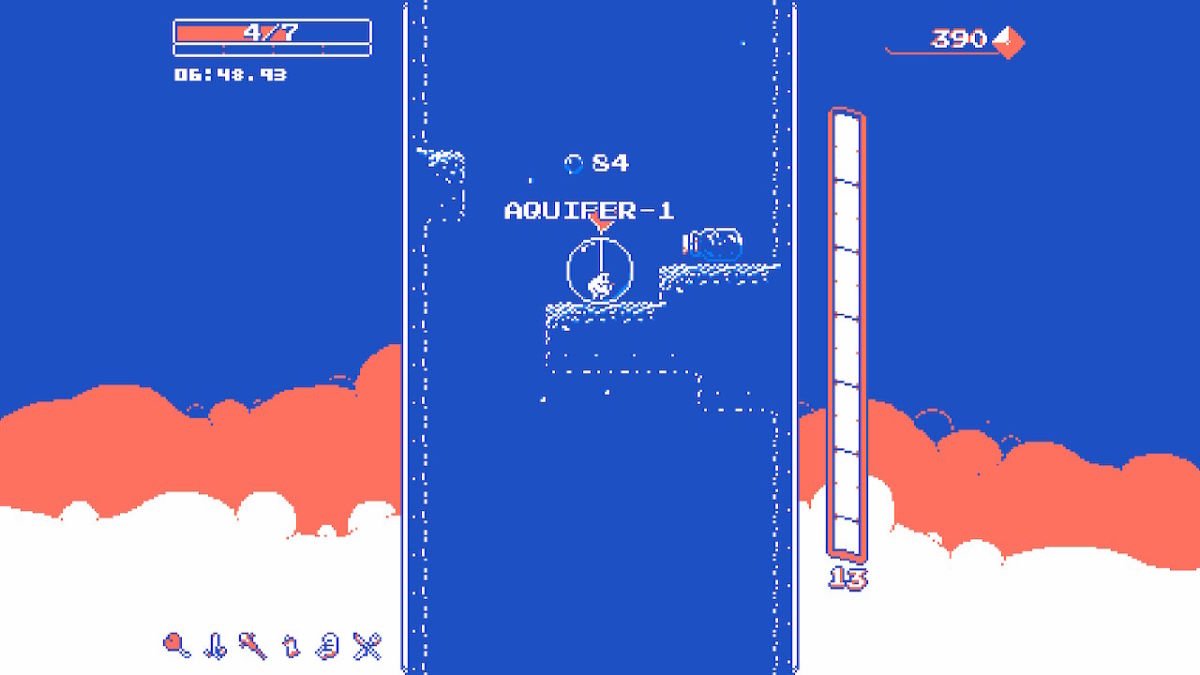 The gameplay is simple, so simple in fact that it uses only three buttons, two if you count the Switch’s analog stick as a single button. You control the direction of the young man who decided to take the plunge and jump and shoot with the same button — that’s it. Almost every button on the Switch does the same thing, so whether you want to shoot/jump with the face or bumper buttons, it’s up you. Controlling the gun-boots is as straightforward as jumping and then shooting, but there’s a surprising amount of complexity and strategy that comes with even a simple jump.

The gun-boots’ primary purpose is to dispose of the varied enemies, but they’re also necessary for using momentum to move you across the screen. However, they have finite uses before you need to land or kill an enemy so that they recharge, which ties in with Downwell’s unspoken necessity for combos. Racking up kills will start off your combo counter with the higher figures giving you bonus gems and even an extra life. Collecting enough gems will also send you into a “gem high” state, which will give you better accuracy and damage. Everything you do in Downwell ties together in a remarkably organic and intricate way: one thing will then set off a chain of events which could either derail or accelerate your progress, proving there’s a lot more to the game than meets the eye. 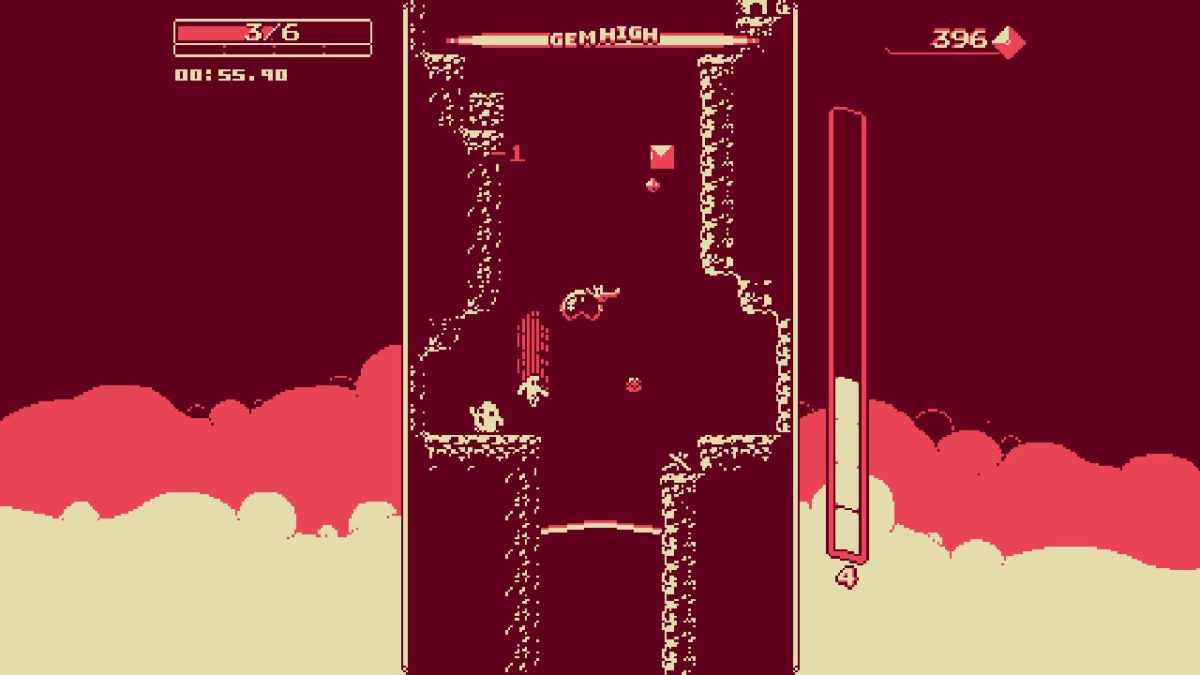 Gems can also be used to make purchases from the store and the friendly shopkeeper (unless you jump over him). These aren’t cheap and become more expensive the more you buy a certain item, i.e. health, so you should weigh up whether you want to spend your gems early on to keep your HP at a good level or risk it so that you can make a purchase when your back is really against the wall. There’s even the option of buying additional overall HP, so you’re going to want to dispatch of enemies to get as many gems as possible, though this obviously comes with a greater risk.

Players also have the opportunity to change weapons by finding pick-ups in caves, though not all of them are ideal for the game’s busier areas. Considering that these weapons will also give either additional health or charges for the gun-boots, it’s a constant dilemma whether you should sacrifice the gun-boots variant that has served you well for an inferior pick but with the compensation of extra health or charges. The quest for health is a constant throughout Downwell, the enemies likely to chip away at your HP with just a second of indecision or imprecision. You can stomp on certain enemies to dispatch them, but others will instead hurt the player. It’s not a case of simply falling to the bottom of the screen and evading enemies: you have to take the fight to them as Downwell rewards aggression. 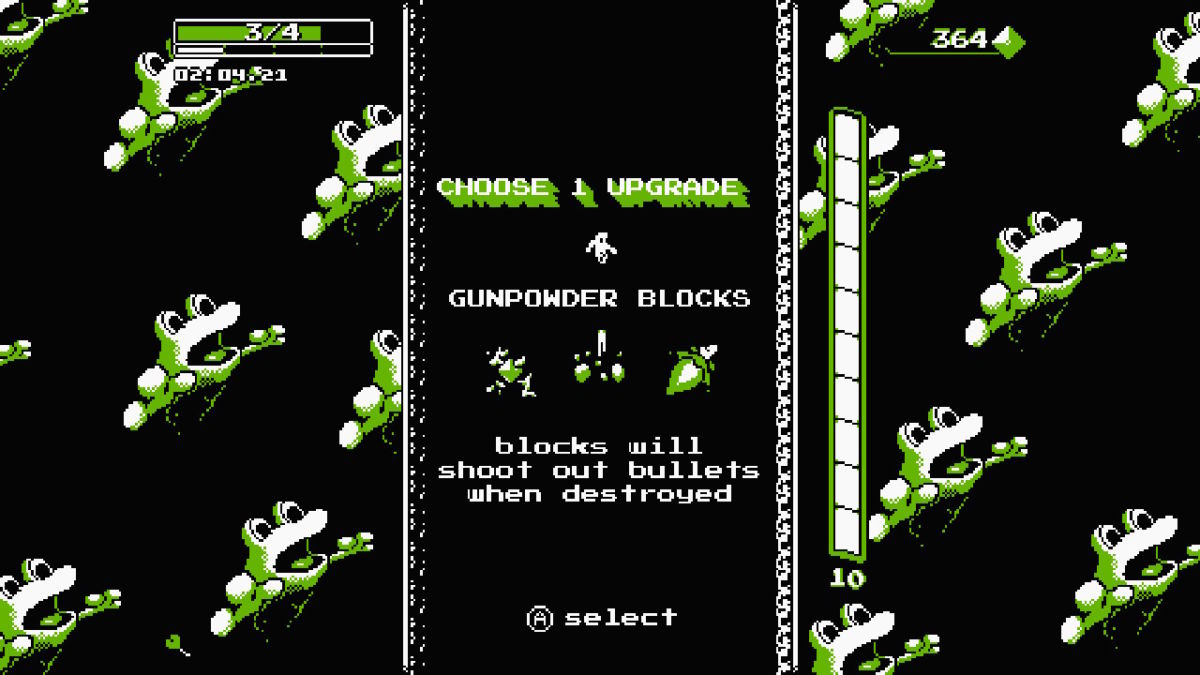 Reaching the bottom of a stage will give the player the opportunity to select a randomised upgrade, which applies to the entirety of their run. These range from a simple balloon that will cause an explosion when an enemy hits it to the ability to eat dead bodies for health. There are upgrades for different playstyles: I go for a frag-heavy approach whenever I can, so if I get lucky and find the Popping Gems, Drone, and Gunpowder Blocks upgrades, I know I’m in for a good run. This combination (as well as the Knife and Fork) guarantees that something’s going to die as the screen fills up like Ikaruga with me then able to eat the spoils of war for a health boost.

You yourself may have a way of certain way of playing, but Downwell actually lets you choose how you want to play with unlockable playstyles. The simplest is Levitate, which allows you fall slower, and goes all the way up to Handstand, which does not give you any upgrades whatsoever — one for the masochists, that one. Boulder, meanwhile, gives you two additional health with the caveat of fewer upgrades and faster falling. The game does a fantastic job of doling these out the more you play with there actually being plenty of unlockables for performance, which keeps you coming back for more and experimenting to find the playstyle that suits. 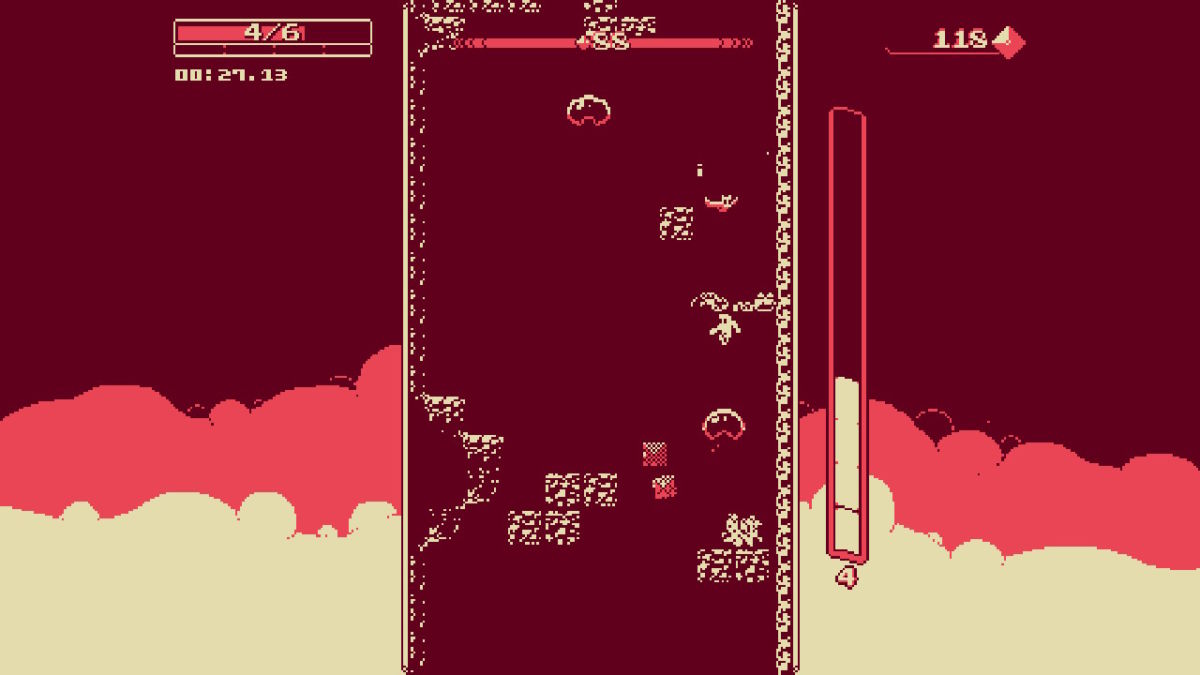 There’s even the hook of playing to unlock different palettes, which alter the aesthetic from the distinctive red and black to a surprising variety of different choices ranging from Game Boy and Virtual Boy homages to a simple colour swap. Some of these are actually handicaps as they make it harder to spot enemies, but it’s still an appreciated detail that keeps the player coming back and trying to add to their score.

The majority of my playtime with Downwell was handheld in the “conventional” sense, but I did also dabble in the game’s “tate mode”, which resembles its mobile version. Players can flip the Switch vertically and then use a Joy-Con to control the action, though I couldn’t gel with it that well personally. Bizarrely, I found myself doing better without a Pro controller and a TV and instead just played it in handheld, surprising considering the Pro gives more accurate movement. It just proves the value of the Switch, it replicating the different ways I had previously played Downwell on other platforms with a single console and allowing me to choose the method that suited me best. 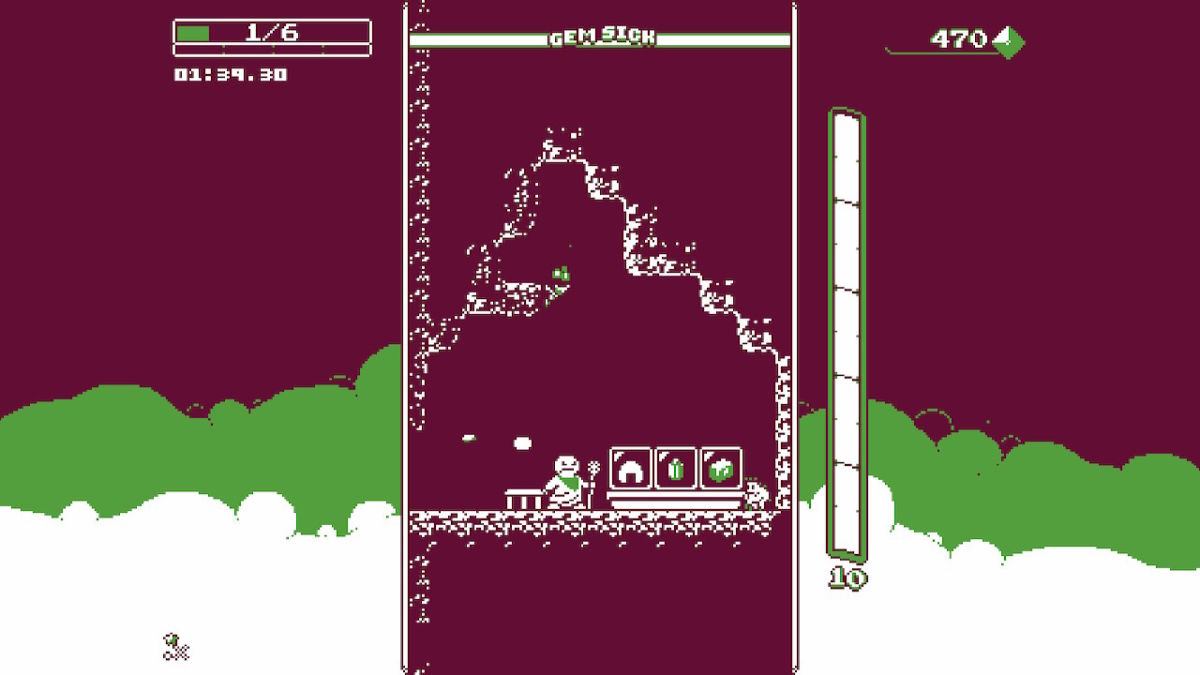 While Downwell is a thoroughly addicting time, it can cause some frustration as a lot of your success is tied to just how lucky you are thanks to its random nature. If the upgrades aren’t that helpful and enemy placement not that kind, it can feel a little like the game is out to get you. This could be argued away by suggesting that you shouldn’t depend so much on the game to lend you a hand and to make your own luck instead, but it’s hard to think that way when four bats and two frogs are coming your way early on and forcing you to take a hit. These unbalanced moments aren’t that common, however, and can be side-stepped with some quick thinking and enough experience.

Pound-for-pound (or dollar-for-dollar), Downwell is one of the Switch’s best games in its price bracket and just generally one of the system’s best games, which applies to every system that Downwell has appeared on to date. Despite being four years old this year, Downwell is still as maddeningly enticing as ever and, thanks to the multitude of ways of playing, might be at its most compelling on Switch.

Verdict
Downwell's Switch port proves that, no matter the platform, it's one of the most addictive and rewarding shooter platformers out there with its price point making it feel like an absolute steal.
9