Doctor Who: Season 12 – Episode 5 ‘Fugitive Of The Judoon’ REVIEW

Doctor Who sees the return of some old friends - fugitives of the fondly remembered Russell T. Davies era. 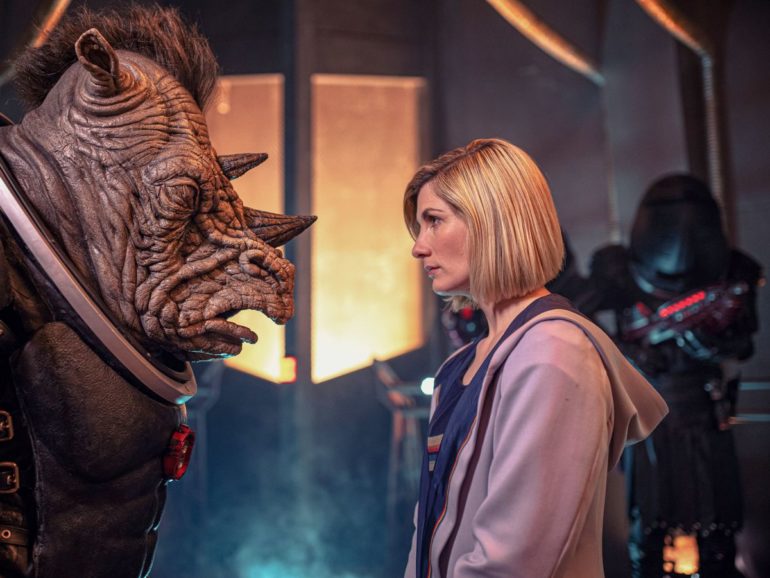 After the blandness of the previous two episodes I wasn’t exactly enthused for Doctor Who’s latest episode, ‘Fugitive Of The Judoon’, – especially given that the promotion for it seemed entirely centred around the return of the Judoon, the space-Rhino’s from the Russell T. Davies-penned era of the show.

While that has now somehow become nostalgia (oh Christ, I’m old), they weren’t exactly the most interesting villains ever, and the prospect of their return seemed like more of the same run of the mill, CBBC style storylines we’ve had for most of this season. Once it gets going however, this is easily the most ambitious episode we’ve had in a while, keeping you engaged throughout – even if it seems more interested in setting up what’s to come than telling its own story.

At first, the return of the Judoon does feel like the show is just running through its greatest hits, revisiting the concepts and creatures from when its popularity peaked. After a bit of awkward, unfunny comedy centred around new character Ruth and her weird, cake-making admirer, ‘Fugitive Of The Judoon’ spends its first ten minutes looking like almost a moment for moment remake of 2007’s ‘Smith and Jones’, the episode where the Judoon first debuted. It’s got all the same beats – from the Judoon’s simplistic language, the reveal of what they look like, their trigger-happy nature and their stamping people’s hand while searching for an alien fugitive, who we’re all instantly thinking has to be Ruth’s shifty, secretive boyfriend. All this stuff worked in ‘Smith and Jones’ because that episode’s focus was the introduction of a new companion, but here it just seems like we’re in for some inconsequential fluff.

But then, suddenly, companion Graham is teleported on to a spaceship by someone who sounds very familiar, and the whole thing completely shifts gears. Out of nowhere we get the return of Jack Harkness, played by John Barrowman, making his first appearance in over a decade, and my God, it’s like he never left. From the swagger, the cheesiness, the flirting, and even his appearance, Barrowman settles back into the role with the greatest of ease. Before taking over Doctor Who, writer Chris Chibnall was the head writer on Torchwood, the spin-off starring Harkness, and it’s clear he knows the character like the back of his hand. In just ten minutes on screen Barrowman is able to inject so much fun into the episode, with lines like “it doesn’t even have a bar,” not to mention his glee that the Doctor’s now a woman.

Of course, like the Judoon, it is just fan-service, designed to appeal to nostalgic fanboys like me, but probably not meaning much to the casual viewer. In fact, his appearance is even more egregious than the Judoon since, while they are an important part of the plot, Jack is literally only there to foreshadow things to come, and to separate the companions from the Doctor for most of the runtime. But it’s a blast nevertheless, his very presence is a vivid reminder of just how fun this show supposed to be – especially in contrast to the current roster of companions. The second he disappears most fans are going to be impatient for when he comes back, and for him to actually meet Whittaker’s Doctor.

Speaking of Jodie Whittaker, this is by far and away the most interesting I’ve found her so far, and indeed, after a season and half her incarnation is finally starting to feel a bit more like the Doctor. As was the case in Spyfall: Part Two, this episode effectively demonstrates that she is far, far more interesting when she is separated from her companions, and given meatier stuff to do.

For most of Whittaker’s run she’s been playing the goofball, referring to her companions as “fam” and being super nice to everyone. This has not resulted in an interesting character – especially since comedy does not seem to be something Whittaker’s particularly strong with (neither are most of the cast, with the exception of Bradley Walsh). Half the time, when she’s talking at eighty miles an hour, it’s felt like she’s just doing a bad impersonation of Matt Smith or David Tennant, and has resulted in her Doctor feeling like the most lightweight Doctor yet.

What Whittaker is great at, though, is material that allows her a bit of an edge, and to show some vulnerability, and she’s given all that here. While the companions kill time with Jack, the Doctor goes off to a mysterious lighthouse with Ruth – the real fugitive, a woman who believes she’s human but who, it’s slowly revealed, has fake memories, and is in fact someone else entirely.

The two go the lighthouse Ruth believes she grew up in in an attempt to unravel the mystery of her identity, and it’s here where ‘Fugitive Of The Judoon’ gets really interesting. After some of the most generic, run of the mill episodes yet, it is so refreshing to get something that genuinely fells like it’s actually leading somewhere, and remains ambiguous about what’s going on. The scenes where the two prowl around the lighthouse, where Ruth ‘breaks the glass’, and where the Doctor digs up another TARDIS are all really atmospheric and engaging.

The revelation of just who Ruth really is, when it comes, doesn’t prove a let down either. As it comes close to its climax, ‘Fugitive Of The Judoon’ delivers its biggest twist yet when it’s revealed that Ruth, somehow, is another version of the Doctor themselves. The episode keeps its cards close to it’s chest on whether this is the Doctor’s past, future, or some kind of alternative, but it’s an incredibly tantalising prospect. This is true not merely in terms of its ramifications for the plot but also in terms of its character development, with this other Doctor being a much more untrustworthy, trigger-happy figure than the character we know. Like a lot of the episode, it’s a twist that will probably do more for fans than casual viewer. It also seems to have happened only to serve whatever is coming up later in the series, as the Doctor just leaves this mind-boggling, alternate version of herself at the end, without any further questions.

This character moment doesn’t feel like it rings particularly true: it seems like the story is just abandoning it because it’s not time for the finale yet (as it did with the plot threads from Spyfall). It does give Whittaker some really good stuff to work with however. From the start of the episode, she’s a lot more bad tempered and distant than usual, holding off from her companions as she searches for the Master. It’s after the revelation about her alternate self where she really shines however.

As she faces off against this other version of herself, a version which makes no sense in the current canon, we get a version of her Doctor who’s more confused, uncertain and shaken than we’ve ever seen before. Three episodes after the destruction of Gallifrey we finally see her talking about this, as she confronts the episode’s villain with the truth, and she seems utterly lost at the episode’s end, as she tries to make sense of this. Her insistence to her companions that they don’t know her also seems like an effort to go back to the mystery and the alien-ness of the character, something I really liked. This season still has a lot of the same issues as Series 10 – from the wooden dialogue, bland dialogue, and far to on the nose commentary. It is, however, doing much more to flesh out this incarnation of the Doctor, and she’s increasingly feeling a bit more well-rounded, as opposed to the imitation it felt like we got last season.

‘Fugitive Of The Judoon’, then, is an episode which seems to exist purely to set up things to come, and it remains to be seen if it will stand up as an episode in its own right after the season arc wraps up. It is a lot more fun than this show has been in a while however, and there’s a tonne going on to keep viewers engaged. If nothing else, it has me interested in seeing how the season continues to pan out, rather than making it seem like the show is now only capable of more-of-the-same. 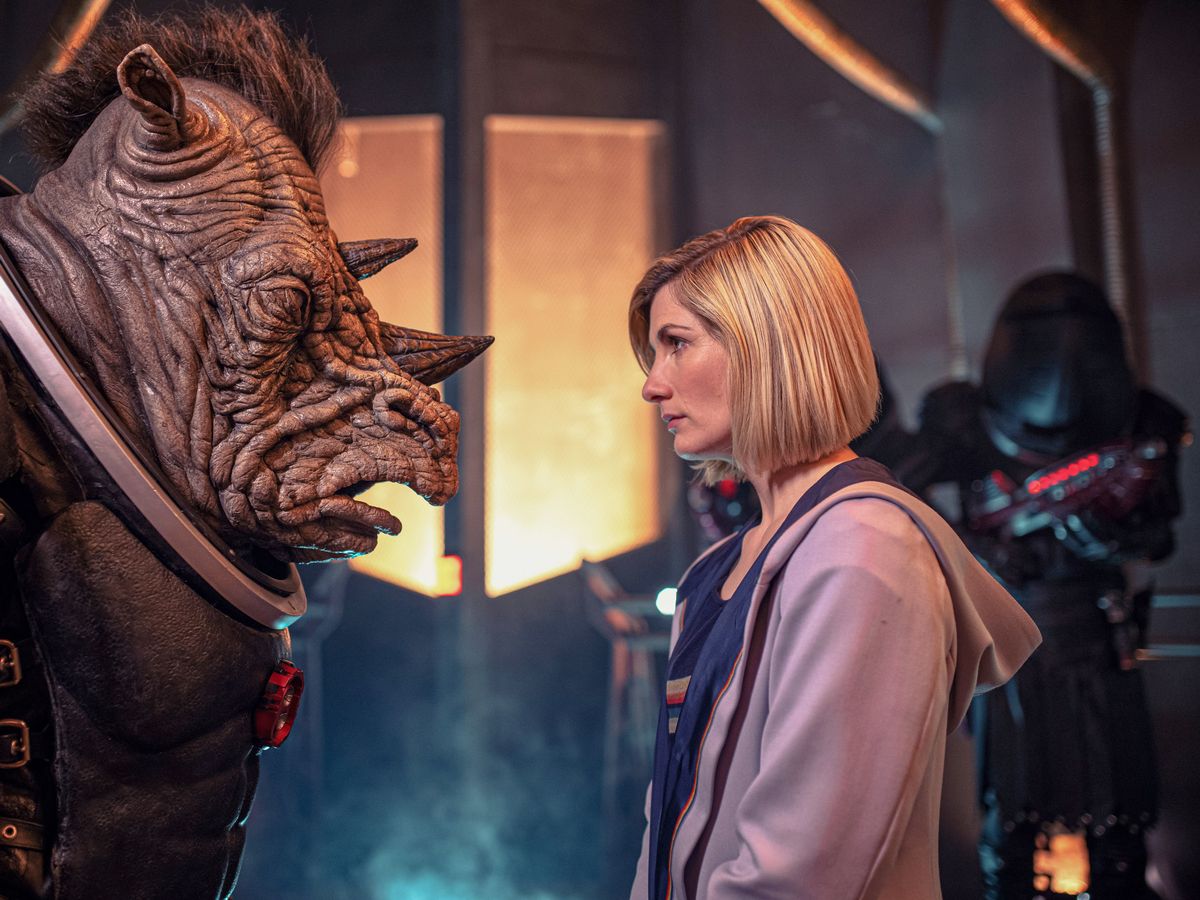 Verdict
An ambitious, tantalising episode which is far more fun and interesting than anything the show has done recently – even if the plot, by the end, doesn’t amount to all that much.
7
Cultured Vultures is a pop culture website established in 2013 covering all things gaming, movies, and more. We eat your words.
All The News On Your Favourite Games