Struggling to make sense of Dauntless? Here's some Beginner's Tips. 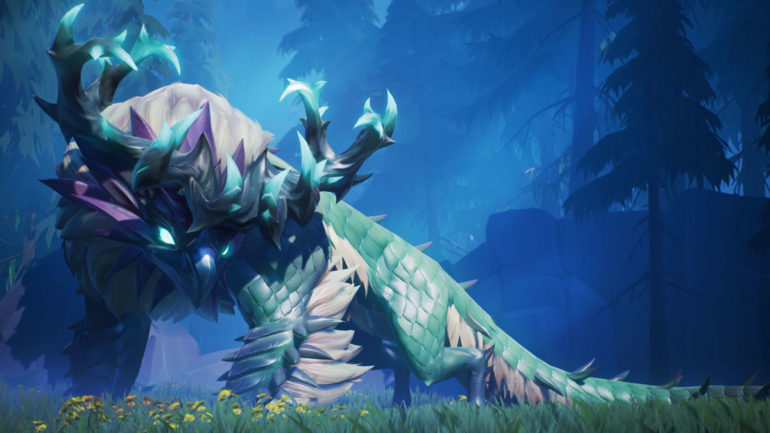 Joining together with friends to take on big monsters is one of gaming’s greatest pleasures, which is why I’ve already taken so well to Dauntless in the few days it’s been available on consoles. It also helps that Dauntless is completely free-to-play, because boy do I hate spending money. For reference, Ebenezer Scrooge is listed as one of my influences.

The comparisons between Dauntless and Monster Hunter are easy to make, and while Dauntless likes to fashion itself as a more accessible version of Capcom’s stellar series, there’s still a lot going with Phoenix Labs’ game. With that in mind, we’ve compiled a list of beginner’s tips that should make journey through the world of Dauntless much easier. 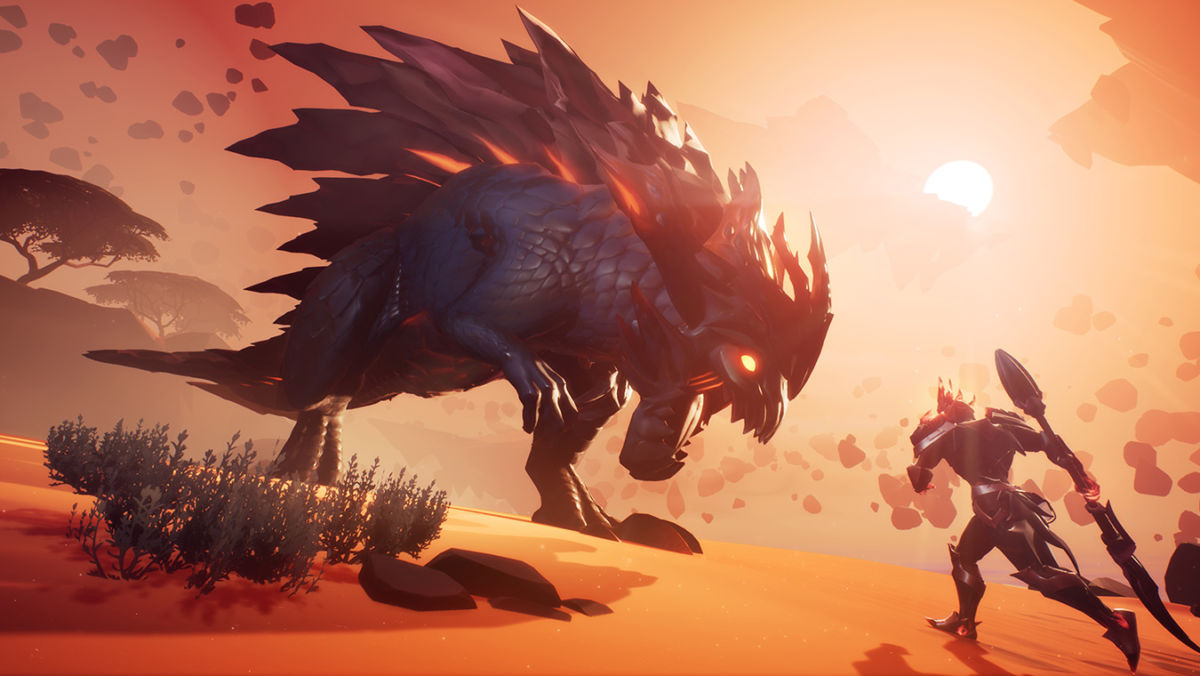 One of the first things that players more used to the likes of Monster Hunter will immediately notice is the faster pace of Dauntless. Levels are smaller compared to the Hunting Grounds of MH, meaning you find the Behemoth much faster, and when you do, the combat is much quicker than its Capcom counterpart.

The game gives you improved mobility, so it would behoove you to put it to good use. The dodge roll, mapped to the B/circle button, is a quick evasive move during which you are invulnerable to attacks. While doing so consumes stamina, the roll is incredibly effective at putting some much needed distance between yourself and the Behemoth during their big area of effect attacks. 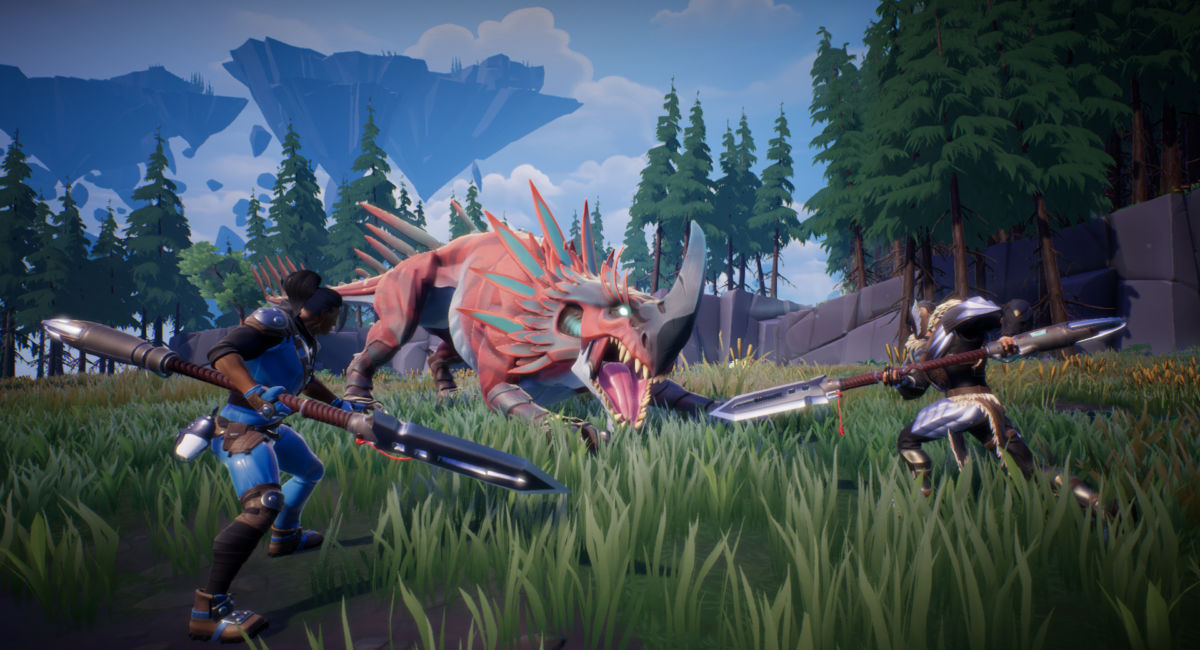 Weapon choice is important in Dauntless, though it should be noted that all weapon types available right now are viable, it’s just a matter of personal preference. The sword is a good all-rounder that’s perfect for new players, while the hammer and axe trade speed for raw damaged. As you’d imagine, the twin blades favour speed instead. The war-pike and repeaters favour more ranged attacks, and would probably be considered the most advanced weapons to learn. We’ll touch more on repeaters later.

Though Dauntless is a simplified version of Monster Hunter, that doesn’t mean you can simply mash buttons and hope to win. Each class has their own combos that allow you do extra damage, and the combo list is easily accessible from the pause menu, so make sure to always check there if you’re trying a new weapon or need a refresher.

This is more for those who play in co-op, but each weapon class has its own benefits that can make hunting as part of a team much easier. For instance, the hammer is the only blunt weapon type in the game, which allows hammer users to strip armour from Behemoths quickly or even KO an enemy for some follow-up damage, so they’re worth having.

Another example is the War Pike, a piercing damage weapon that can inflict wounds upon parts of a Behemoth. If another member of the hunting party attacks that area, the Behemoth takes increased part damage. Using a War Pike to open up a Behemoth to follow up damage from an Axe or Sword user is a great way to break off parts, increasing your loot.

4. Be Smart, Yet Relentless 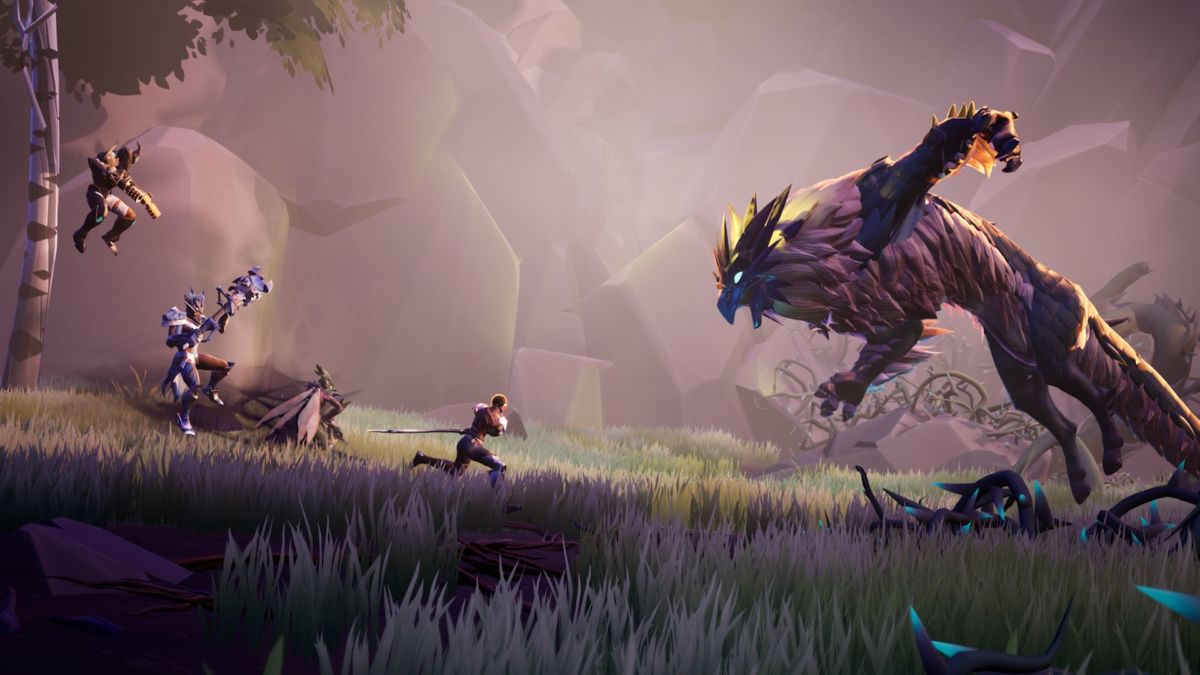 Much like Monster Hunter: World, breaking off parts of a Behemoth will net you additional loot, which you need to create the better weapons and armour you’ll need to progress through the game, but it’s a little bit more complicated than that. For instance, damage done to that part, which is indicated by yellow numbers, doesn’t actually affect the overall health pool.

Slashing weapons, like the Sword, Axe and Twin Blades are the best as dealing part damage, specifically when targeting tails, but all weapons are capable of breaking Behemoth parts. Taking out parts will also have additional consequences, like limiting or changing the Behemoth’s moves. They can’t hit you with a tail if they don’t have a tail, after all. 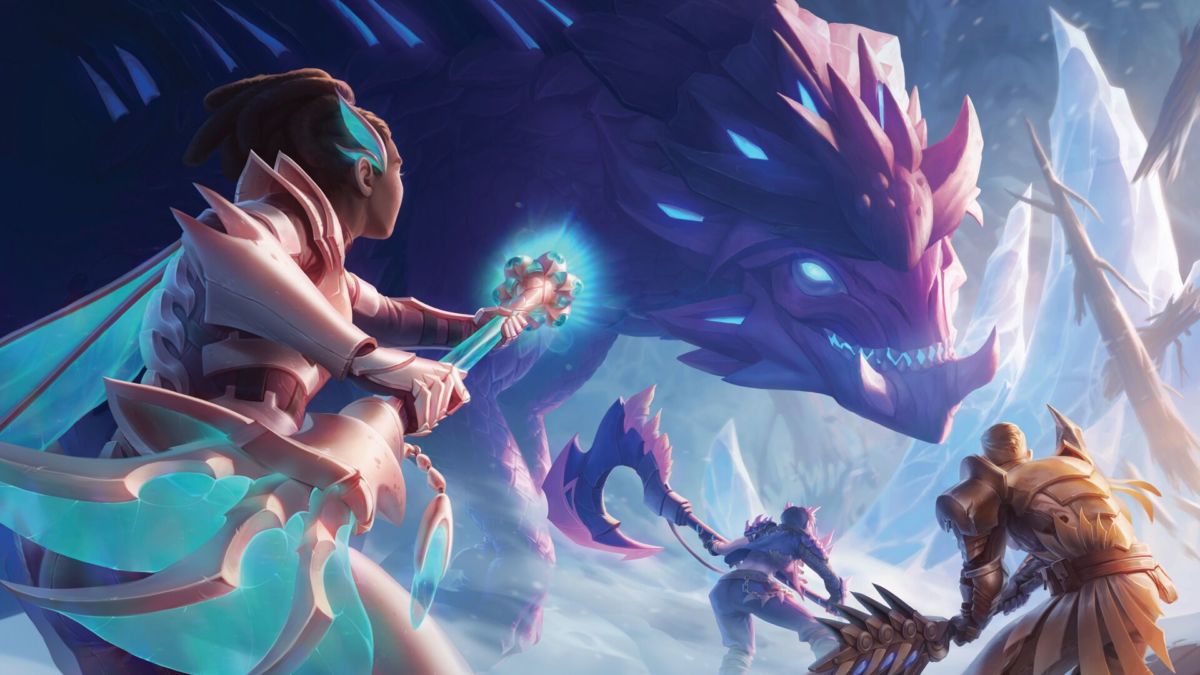 Knowledge of each individual enemy is also incredibly important, as different fights require different strategies. On an obvious level, Behemoths can be inherently elemental, with Blaze, Shock, Terra, Frost, Umbral and Radiant all present. These elements are strong and weak to certain weapons, and your armour will either be better or worse when taking hits. Dauntless is pretty upfront about what elements you’re dealing with, but it still pays to prepare for the hunt in advance, and have multiple armour and weapon loadouts for the different Behemoths.

On a more advanced level, the enemies you encounter often have their own strategies that make fighting them much easier. One of the first you’ll encounter is the Lesser Boreus, which forms an ice shield and summons minions. If you take out a minion, you get increased damage on your next Boreus hit. These tips appear on the “preparing hunt” screen when you’re matchmaking, so pay attention to those screens on every new hunt. You might learn a thing or two. 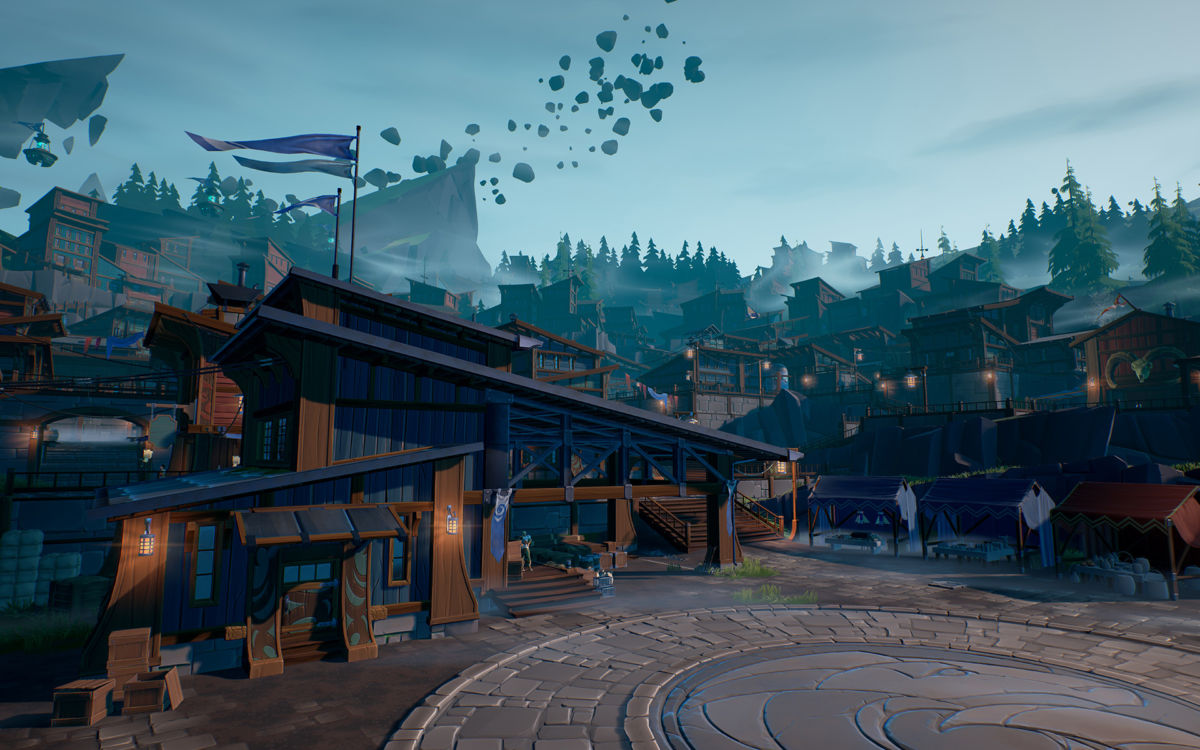 Ramsgate is the hub world from which all your activities take place, so it pays to get acclimated with the different vendors and their uses. Every time you return from a hunt, its worth doing a loop of the area, stopping by at the different vendors to see if there’s any new weapons or armour to craft or a new quest to undertake.

Unlike MH, where each weapon type followed an upgrade tree, weapons in Dauntless are explicitly tied to the Behemoths themselves. You don’t have to have crafted a pre-requisite weapon to unlock the one you want, basically, and you can just keep upgrading that weapon if you have the right materials. In the higher levels, you’ll need plenty of Orbs, elemental or otherwise, which can be obtained by, you guessed it, killing Behemoths.

In the very early game, upgrading your weapons and armour can have an immediate benefit when it comes to damage and defense, but in order to progress further, you need to improve your Slayer level. The only way to do that is by completing Mastery Challenges that you earn throughout the game.

Every Behemoth and every craftable weapon (along with the overarching weapon type) has its own series of challenges, and levelling up these categories grants rewards and contributes to your Slayer level. Increasing your Slayer level then has its own series of rewards. Around level 18, you’re able to reach +10 on your weapon and armour upgrades, and further levels increase health, stamina and loot gain chance.

Most Mastery challenges are completed through the natural course of the game, like dealing X amount of damage with a weapon type or hunting a set amount of Behemoths, but there’s also challenges for crafting every unique weapon or every piece of a Behemoth’s armour. If you have the materials to spare, craft new weapons, even if you won’t use them. It’ll help you upgrade the ones you do use. 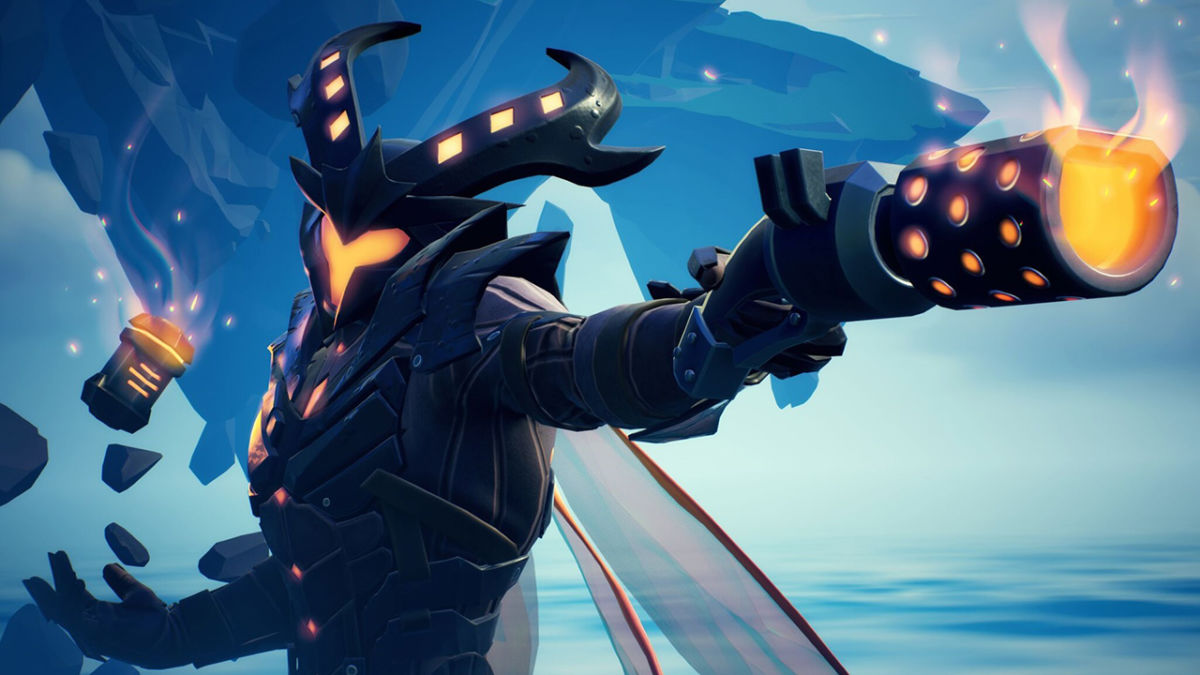 We’ve saved Repeaters for their own portion of the guide, as they’re more unique than other weapons. A pair of pistols that give you better range in a fight, the Repeaters are unlocked after your first couple of hunts, but the way you craft a Repeater is unlike all the other weapons in the game.

Instead of crafting a repeater wholesale, you craft individual parts like the barrel, grip and chamber. While the barrel affects basic shots, the chamber and grip determine what special attacks the Repeaters have. You can also craft a unique prism that further modifies how the weapon performs, making the weapon highly customisable and functional depending on your needs. 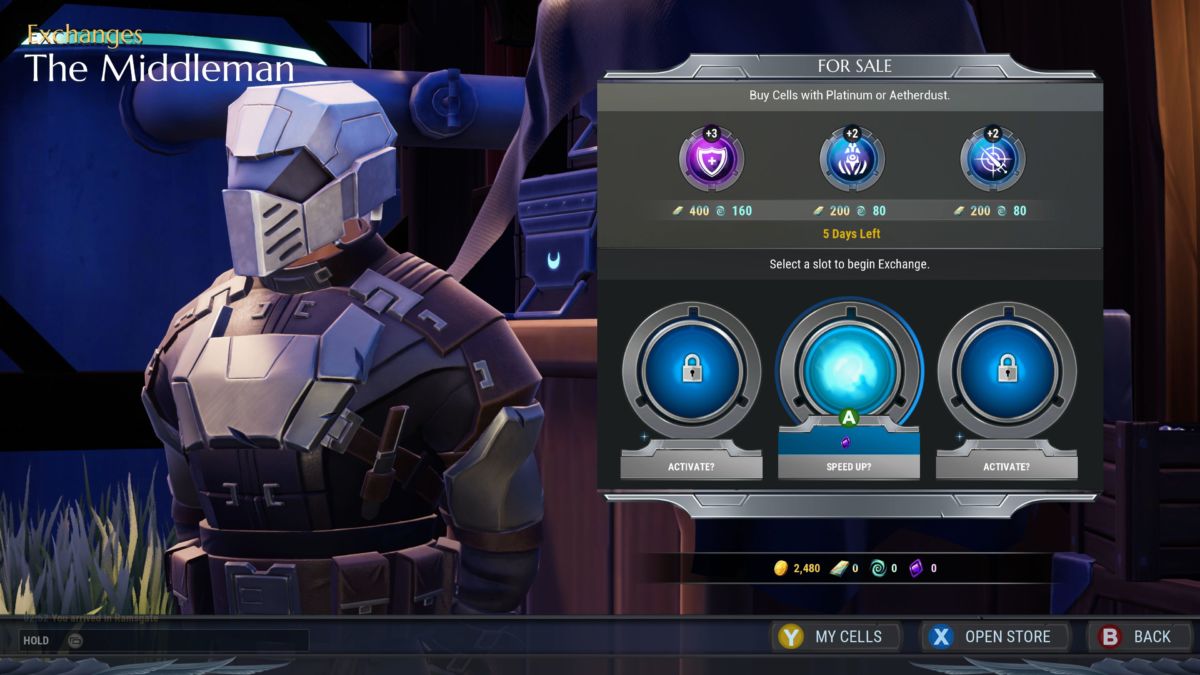 Cells are a way to further enhance your weapons and abilities, as Cells grant perks up to a stack of +6 that improve your character. Each piece of your loadout has a set amount of Cell slots, and you unlock more Cells by completing hunts and levelling up, but there’s a way to unlock new cells and improve Cell rarity: The Middleman.

Located near the entrance of Ramsgate, The Middleman allows you to fuse together Cells to improve rarity, which in turn improves the perks attached to them. The Cells you fuse together determine your output, with 2 cells of a different type of perk (power, technique, mobility, defence & utility) producing a random, higher rarity perk of any type, while two of the same type produce a higher rarity perk of that type. Fusing two that share the same perk will simply create a better version of that perk.

The Middleman is sort of tied up into the game’s monetisation aspects, as you need to pay in Platinum to unlock more fusing slots, while the fusing process can take at least 24 hours depending on the fusing type and rarity. You can speed up the process with Ace Chips, but you need Platinum for that too, so unless you’re willing to sink money into what is, in all fairness, a free-to-play game, The Middleman is something important you should have running in the background. 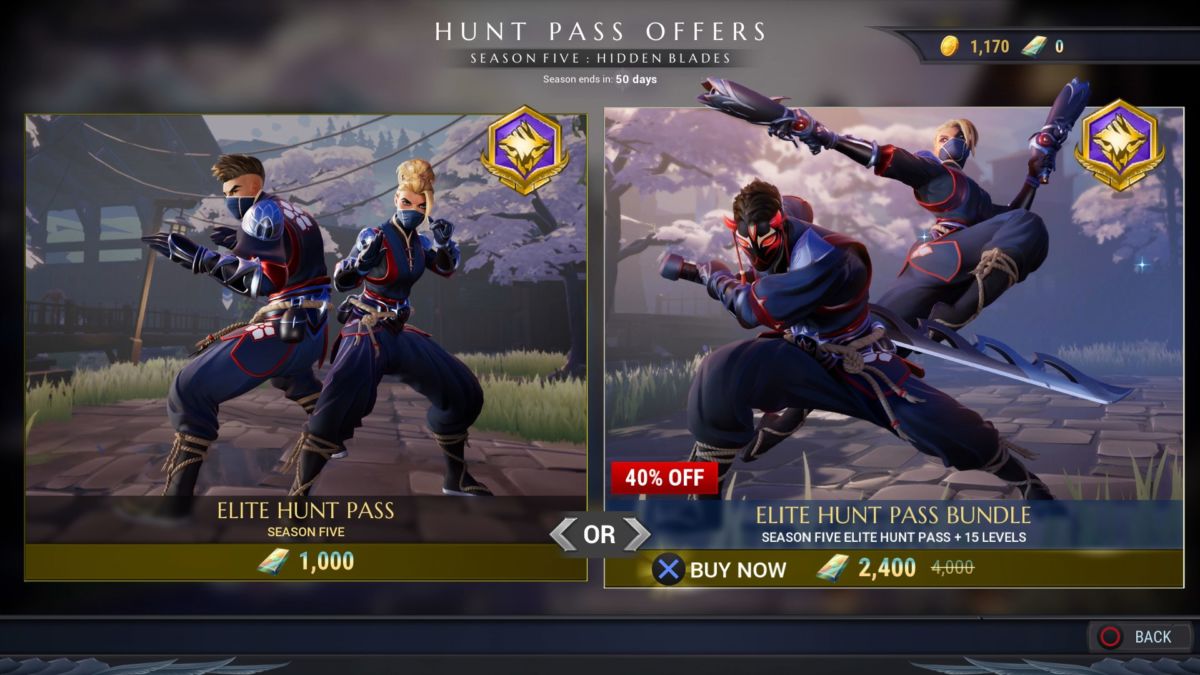 Speaking of monetisation, let’s talk a little bit about The Hunt Pass. Like a Battle Pass, the Hunt Pass is a tiered reward system that grants you goodies depending on how much you level up, with a Basic tier and an Elite tier depending on whether or not you’ve paid the premium cost. That said, the current pass is pretty rewarding for Basic players for the first 15 levels, so it’s worth leveling up regardless of whether or not you upgrade to the Elite tier.

Leveling up the pass requires Heartseekers, and while you get them naturally for breaking parts of a Behemoth during a hunt, there are two other ways to collect them. Firstly, each week there’s a new set of challenges that can be viewed on the Quest Log page, and each challenge grants 150 Heartseekers. Considering that a level up is just 100 pieces, they’re incredibly worth doing.

On top of that, every day in Ramsgate, at least for this current season, you’ll be able to find 10 deathmarks that are nailed to walls with a kunai (Season 5: Hidden Blades is a ninja themed event), and finding each one adds another 5 pieces to your Hunt Pass. Finding them only takes a couple of minutes, so you should go out of your way to do so.

You can pet the dog in #Dauntless. GOTY 2019. pic.twitter.com/ZT1NssRtRD

You should pet the dog in Ramsgate. There’s no in-game benefit for doing it, but just pet the dog. If you don’t, you’re a monster, or a Behemoth. And we will hunt you down and use your skin as armour. Do it, you coward.